Educational Programs for the Promotion of Health at School: A Systematic Review
Previous Article in Special Issue

Are Sleep Problems Related to Psychological Distress in Healthy Aging during the COVID-19 Pandemic? A Review

Physical Activity and Its Determinants among Senior Residents of Podlasie, a Green Region of Poland, Based on the National PolSenior Study

Physical activity is essential at all stages of life, and particularly so in the later years. The main objectives of the present work was to evaluate the physical activity of seniors, aged 65 years and older, living in the area of the Podlaskie voivodeship (Podlasie), Poland, based on the results of the nationwide PolSenior project, and to formulate recommendations for health policies implemented by both national and local government units. The study was performed as part of the national PolSenior project, whose aim was to evaluate various aspects of aging in Poland. The physical activity of a group of 186 randomly-selected people aged 65 years and above, 94 men and 92 women, was evaluated by questionnaire. The analysis included participants who took part in physical activity at least several times a week. Although all participants reported a decline in physical activity with age, the men remained physically active for longer. Among the respondents, 68.3% of women and 62.7% of men took short walks around the house as the main form of exercise, with working on the allotment or garden being another frequent activity; however, this was more common among men (53.9%) than women (34.7%). In addition, men were nearly twice as likely to take part in cycling (31.5%) than women (13.1%). The greatest motivation for physical activity given by the respondents was health, as noted by 73.8% of the men and 77.7% of the women. The physical activity of seniors in Podlasie is unsatisfactory and does not fulfil the WHO recommendations regarding the prophylaxis and prevention of chronic illness. This level does not, however, significantly differ from that reported in the nationwide PolSenior study or in other European countries in the Eurobarometer study. The decline in physical activity with age highlights the need for its greater promotion among seniors by local authorities. Such initiatives will help maintain the physical fitness and independence of this age group and contribute to a greater quality of life. View Full-Text
Keywords: physical activity; older people; aging; healthy aging physical activity; older people; aging; healthy aging
►▼ Show Figures 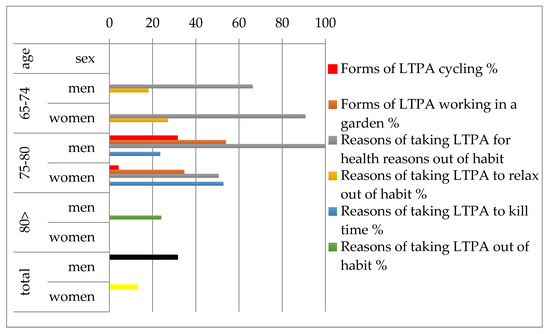