Fraction and Number of Unemployed Associated with Self-Reported Low Back Pain: A Nation-Wide Cross-Sectional Study in Japan

Internet Use Impact on Physical Health during COVID-19 Lockdown in Bangladesh: A Web-Based Cross-Sectional Study

The novel coronavirus disease 2019 (COVID-19) lockdown and the associated public health interventions, including social distancing, home quarantine measures, and ‘stay-at-home’ orders put in place by the various governments led to a surge in internet usage during the lockdown [1]. The lockdown measures resulted in a widespread unprecedented social disruption [2] as non-essential businesses were closed, some employees worked from home and unemployment increased [3]. There were massive changes in the pattern of use and behavior of internet users and employees had to quickly adjust to the new “normal”—with meetings going completely online, office work shifting to the home, leading to new emerging patterns of work. These changes were sudden to most organizations, businesses, societies, or governments, leaving barely any time for organizations and people to plan for, prepare and implement new setups and arrangements. Society has had to adjust, try, experiment, and find ways that did not exist before the lockdown [1], and these may have implications on the physical health of individuals.
People are now spending even more time with technology while consuming news media, watching television, using social media to connect with others, utilizing lifestyle apps to shop for groceries and other consumer goods, and engaging in home workouts [2]. In Bangladesh, this kept parts of the economy going [4] as the country witnessed a boom in internet usage due to the fast-growing mobile internet and the government’s push for digitalization. Engaging in social media platforms is now a routine activity for children and adults, enhancing communication, social connection, and even technical skills [5]. Platforms such as Facebook and Twitter offer multiple daily opportunities for connecting with friends, classmates, and people with shared interests. The number of people using such sites has also increased dramatically, as shown in a recent poll [6]. A past study reported that about 22% of teenagers log on to their favorite social media site more than ten times a day, and more than half of adolescents log on to a social media site more than once a day [6,7]. Seventy-five percent of teenagers now own cell phones, 25% use them for social media, 54% use them for texting, and 24% use them for instant messaging [7].
According to the Bangladesh Telecommunication Regulatory Commission, there were 99,428 million (approx. 60.9% of the population) internet users in February 2020 [8]. Though there is anecdotal early evidence that this may lead to increased productivity, it has also led to increased stress [9,10] where employees must learn new technologies, be available for work at almost all times, stay with digital devices all the time, and cope with multi-tasking [1]. The use of video-conferencing and content delivery services such as Zoom and Akamai also increased [1]. Those working from home using this technology have found themselves under intense scrutiny and tension [11].
That a large part of the peoples’ social and emotional development is occurring while on the internet and cell phones may affect the physical health of individuals considering the long hours spent on the internet during the mandatory stay-at-home orders, which exposes the population to lots of misinformation [12] known to affect physical and mental health [13]. With such high use of information systems becoming the new normal in our society, this study was designed to examine the impact of internet usage frequency during COVID-19 lockdown on self-reported physical and mental health of Bangladeshi residents’. The study also determined the level of addiction to social media platforms used by the locals.

By convenience sampling, 3242 questionnaires were collected from adults aged 18 and over living in eight divisions across Bangladesh during the lockdown. All questionnaires were web-based, participation was voluntary, and each participant was informed about the study’s background through an online preamble. No reward or incentive was offered for participation. In order to ensure the validity of data to some extent, restricting the same IP address and device are applied to the system, which means the participant of the same IP address or device only could participate once.

Data were collected using self-administered web-based questionnaires distributed to various groups of people via the E-link using numerous mailing lists and social network sites including Facebook, WhatsApp and Twitter. Due to the mandatory lockdown, no paper questionnaires were distributed, making it difficult to reach the very remote regions.

Ten items of physical complaints reported in Table 2 below were used to determine the impact of individual self-reported physical health on internet use. The respondents used a close-end response [‘Yes’ or ‘No’] to indicate whether they suffered from the following ten problems (back and neck pain, numbness in fingers, headaches, inability to sleep, dry eyes or other vision problems, poor nutrition, poor personal hygiene, weight gain/loss and loss of appetite] during or after pro-longed internet use. Binary scores for individual questions were summed to give a physical health score, which ranged from 0–10, and the Kuder–Richardson coefficient measuring internal consistency among the physical health scores ranged from 0.65 to 0.78, indicating a satisfactory level of reliability.

All statistical analyses were performed in Stata version 14.1 (Stata Corp. 2015, College Station USA) mainly using descriptive statistics; the t-test used compares the means of two independent groups, one-way analysis of variance (one-way ANOVA) used compares the means of more than two independent groups and simple and multiple linear regression analysis was conducted to estimate the unadjusted coefficient and adjusted coefficient.
In the simple linear regression analysis, all confounding variables with a p < 0.20 were retained and were used to build a multiple linear regression model [18]. A manual elimination procedure was applied for multiple linear regression analyses to remove non-significant variables (p > 0.05). To examine internet use impact, the main study factor variable (Internet usage frequency) was added to all significant confounding variables after elimination processes. The main study factor and demographic variables associated with physical health scores (p < 0.05) were reported. In the regression analysis, we checked for homogeneity of variance and multicollinearity, including Variance Inflation Factors (VIF) and the VIF < 4 was considered suitable [19].

3.1. Demographic Characteristics According to the Frequency of Internet Use among Adults in Bangladesh

In Table 1; the main demographic characteristics, including gender, education and age group, on the five groups extracted are shown. It is worth noting that the education in this paper refers to that of the mothers’ maximum educational level. The majority of participants were males (1976, 61.1%), married (2632, 81.2%) and employed (2864, 88.3%) in non-healthcare sectors (2567, 79.2%), and for many, their mothers had completed a bachelor’s degree or higher. About half of the respondents earned more than 70,000 Taka at the time of data collection (Table 1).
About two-thirds of the respondents that reported intense use of the internet were males, while females were more likely to report regular and casual use of the internet. Ages ranged from 17 to 65 years of age, with a mean of 32.9 years (SD = 6.8). More than half of intense and frequent internet users were aged 28–37 years, and a similar proportion of casual internet users were younger (18–27 years). Nearly all intense internet users were employed and working in the non-healthcare sector during the study.
Table 2 shows the prevalence and 95% CIs of the adverse effects on self-reported physical health complaints examined in this study in males and females. Headache 72.50% [95% CI 70.93%, 74.01%] was the prevalent complaint of the participants, while 69.87% [68.27%, 71.43%] and 65.10% [63.42%, 66.71%] complained of back pain and numbness of the fingers, respectively. Males reported a higher prevalence of back pain, numbness of the finger, headaches, and neck pains than females as the confidence intervals do not overlap (Table 2). By contrast, females reported a higher prevalence of poor nutrition, poor personal hygiene, and loss of appetite compared with men (Table 2).
Figure 1 shows the mean scores of physical health by internet use frequency in males and females. From the figure, the mean scores of physical health by intensive internet use were 5.6 for males and 5.4 for females. This physical health mean scores could be translated as percentage mean scores of males (56%) and females (54%), respectively. Physical health mean scores were lower among the casual user of internet (3.2 for females and 3.0 for males) than seldom users of internet (3.1 for females and 3.4 for males).

3.2. Unadjusted Analysis for the Association between Prolonged Internet Use and Self-Reported Physical Health Complaints

4. The Impact of the Frequency of Internet Use on Physical Health Scores

In summary, the study found that uncontrolled use of the internet is prevalent among the respondents in Bangladesh as more than two-third reported excessive use of the internet during the lockdown, and this doubled the adverse effects on their physical health compared with seldom users. Headaches, back pain, numbness of the fingers and neck pain were predominant among internet users as spending 3 h or more each day on the internet led to a significant increase in the level of adverse physical health problems. The positive associations between physical health complaints and occupation (non-healthcare workers) and income class (middle to high-income earners), indicate the target group for interventions to minimize this growing epidemic. The health department of the Bangladeshi government has now recognized extensive internet usage as a serious public health problem. Arguably, it is time for the World Health Organization and health departments worldwide to enhance effective health policies to increase public awareness of extensive internet use, especially post-lockdown. This has the potential to affect millions of children and adults and, eventually, the societies and economies.

Permission for this study (IUBAT/AR/2021/001) was obtained from the Institutional Review Board of International University of Business, Agriculture and Technology (IUBAT), Dhaka, Bangladesh. The study adhered to the tenets of the Declaration of Helsinki as revised in Fortaleza. All the participants were informed about the specific objective of this study before proceeding to the questionnaire. Consent was obtained from all participants prior to completing the questionnaire through an online preamble. Participants were able to complete the survey only once and could terminate the survey at any time they desired. Anonymity and confidentiality of the data were ensured.

Our data are included in the manuscript and raw data can be released at reasonable request. 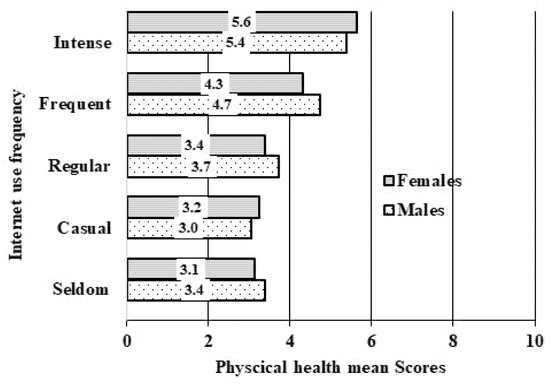