The Effect of Nut Consumption on Diet Quality, Cardiometabolic and Gastrointestinal Health in Children: A Systematic Review of Randomized Controlled Trials
Next Article in Special Issue

Geographical Pattern of COVID-19-Related Outcomes over the Pandemic Period in France: A Nationwide Socio-Environmental Study
Previous Article in Journal

The Effects of Air Pollution, Sea Exposure and Altitude on COVID-19 Hospitalization Rates in Italy

Early known cases of COVID-19 emerged in late 2019 in the city of Wuhan (China) and in a relatively short time, it has reached more than 200 countries up to July 2020. In Italy, from 21 February 2020, (first official Italian positive case of COVID-19) until 27 July 2020, 246,286 confirmed cases were observed of which over 68,150 (28%) needed hospitalization and 35,112 died. In recent scientific research, it has been shown that the severity of symptoms and mortality rates were different not only among the various countries of the world but also in different regions of the same country. This research investigates whether and by how much air environmental conditions (such as exposure to fine particulate matter-PM2.5, sea air masses and altitude) influences the risk of hospitalization due to COVID-19 in Italy, once the spreading of the virus and the percentage of the elderly in the population have been accounted for. A log-linear multiple regression model was estimated where the log of the ratio of hospitalized patients per inhabitant, since the beginning of the epidemic up to July 27, has been considered as a dependent variable. Among the independent variables, the ones that have been taken into account are the spreading of the virus, the rate of people over 50 years of age, the concentration of PM2.5, the rate of population living by the sea, the rate of green public space for each resident and the ratio of population living at a high altitude. The results showed an increase in the hospitalization rate in terms of the percentage of people over 50 and the average concentration of PM2.5. If average limits of PM2.5 concentration allowed by the current European regulations (25 µg/m3) were respected in all Italian provinces, that would have led to 7339 less hospitalizations for COVID-19 (−11%). On the contrary, near the coast there were lower hospitalized cases in the referred period. In the hypothetical case that no Italians lived near the sea, about 1363 (+2%) more hospitalizations would have been recorded in the analysis period in addition to the effect of a lower PM concentration. This paper wanted to investigate which are the areas with a higher risk of hospitalization in Italy, so as to help the Italian Government to strengthen Health System measures, predicting the most suffering areas and health care systems. According to the results, this is directly related to the severity of symptoms which decreased with the long-time exposure to the sea. View Full-Text
Keywords: COVID-19; air pollution; PM2.5; human health; sea air exposure; regression model; high altitude COVID-19; air pollution; PM2.5; human health; sea air exposure; regression model; high altitude
►▼ Show Figures 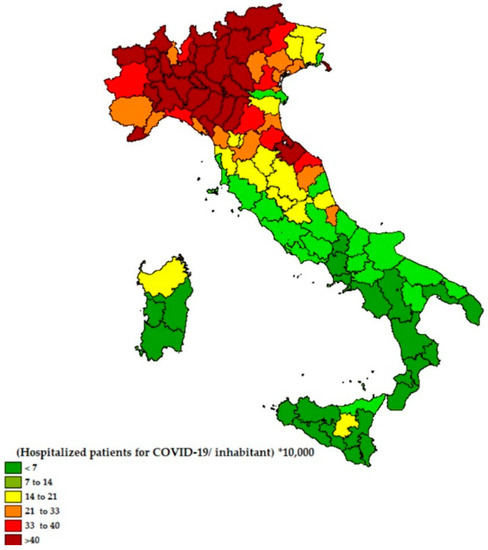