Aflatoxins (AFs) are secondary metabolites toxic to humans as well as animals. The environmental conditions, conventional agricultural practices, and illiteracy are the main factors which favor the production of AFs in food and feed. In the current study 744 samples of vegetable seeds and oils (soybean, sunflower, canola, olive, corn, and mustard) were collected and tested for the presence of aflatoxin B1 (AFB1) and total AFs. Liquid-liquid extraction was employed for the extraction of AFs from seeds and oil samples. Reverse phase high performance liquid chromatography equipped with fluorescence detection was used for the analysis. The results have shown that 92 (56.7%) samples of imported and 108 (57.0%) samples of local edible seeds were observed to be contaminated with AFs. All samples of edible seeds have AFB1 levels greater than the proposed limit set by the European Union (EU, 2 µg/kg) and 12 (7.40%) samples of imported seeds and 14 (7.40%) samples of local seeds were found in the range ≥ 50 µg/kg. About 78 (43.3%) samples of imported edible oil and 103 (48.3%) sample of local edible oil were observed to be positive for AFs. Furthermore, 16 (8.88%) and six (3.33%) samples of imported vegetable oil have levels of total AFs in a range (21–50 µg/kg) and greater than 50 µg/kg, respectively. The findings indicate significant differences in AFs levels between imported and local vegetable oil samples (t = 22.27 and p = 0.009) at α = 0.05 and a significant difference in AFs levels were found between vegetable seeds and oil samples (t = −17.75, p = 0.009) at α = 0.05. The highest dietary intake was found for a local sunflower oil sample (0.90 µg/kg/day) in female individuals (16–22 age group). The results have shown considerably high levels of AFB1 and total AFs in seeds and oil samples and emphasise the need to monitor carefully the levels of these toxic substances in food and feed on regular basis. View Full-Text
Keywords: AFB1; AFs; vegetable seeds; vegetable oils; dietary intake AFB1; AFs; vegetable seeds; vegetable oils; dietary intake
►▼ Show Figures 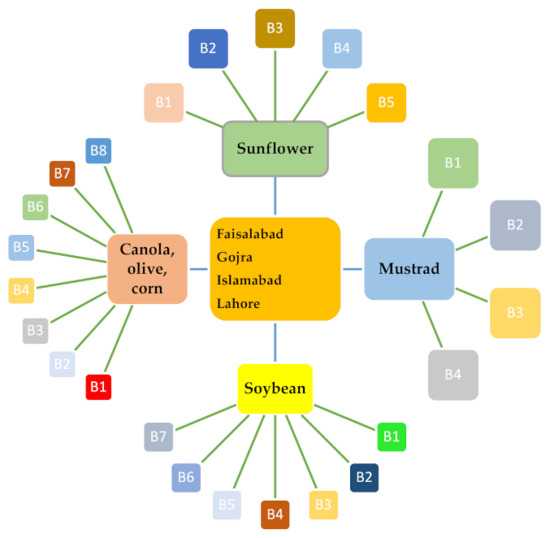