Barriers and Facilitators of Nurses’ and Physicians’ Willingness to Work during a Respiratory Disease Outbreak: A Mixed-Methods Systematic Review

This paper presents the results on the presence and characterization of microplastics (MP) in the gastrointestinal tract of gilthead seabream (Sparus aurata L.), a species of commercial interest from the Mar Menor coastal lagoon in Southeast Spain. This is the first time that microplastic ingestion is recorded in any species from this semi-enclosed bay. Stomach and intestine from a total of 17 specimens captured by local fishermen were processed, and microplastic particles and fibers found in all of them were displayed. Overall, 40.32% (279/692) of total isolated microparticles proved to be microplastics; i.e., <5 mm, as identified by FTIR spectroscopy. The average value by fish was 20.11 ± 2.94 MP kg−1, corresponding to average concentrations of 3912.06 ± 791.24 and 1562.17 ± 402.04 MP by kg stomach and intestine, respectively. Four MP forms were isolated: fiber (71.68%), fragment (21.15%), film (6.81%), and microbead (0.36%), with sizes ranging from 91 µm to 5 mm, an average of 0.83 ± 0.04 mm, and no statistically significant differences between mean sizes in stomach and intestine samples (F-test = 0.004; p = 0.936). Nine polymer types were detected, although most of fibers remained unidentified because of their small size, the presence of polymer additives, or closely adhered pollutants despite the oxidizing digestion carried out to eliminate organic matter. No significant correlation was found between main biological parameters and ingested microplastics, and high-density polyethylene (HDPE), low-density polyethylene (LDPE), polyethylene polypropylene (PEP), and polyvinyl (PV) were identified as the most abundant polymers. The average microplastic ingestion in this study area was higher than those reported in most studies within the Mediterranean Sea, and closely related to microplastic pollution in the surrounding area, although with a predominance of fiber form mainly due to fishery activities. View Full-Text
Keywords: microplastic; ingestion; fish; gilthead seabream; Mar Menor; marine pollution microplastic; ingestion; fish; gilthead seabream; Mar Menor; marine pollution
►▼ Show Figures 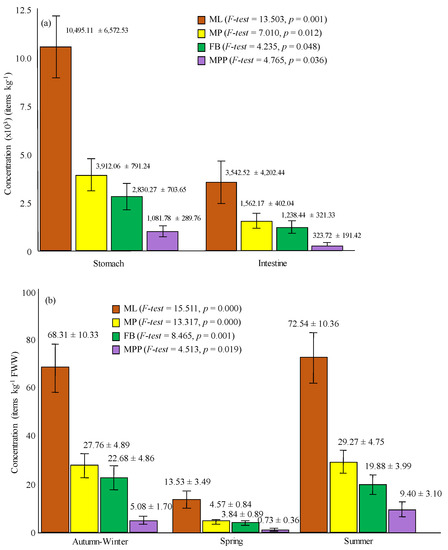