Where and How Extensive Are the Living Areas of the Elderly? An Empirical Study on ‘Ageing in Place’ in Three Small and Medium-Sized Japanese Cities
Previous Article in Journal

Perspectives on the Health Effects of Hurricanes: A Review and Challenges

Multiple sclerosis (MS) is a neurological disorder that progressively distorts the myelination of axons within the central nervous system (CNS). Increased core body temperature or metabolism as a result of exercise are common causes of short-term exacerbations of neurological symptoms in MS. About 60–80% of patients with MS experience a worsening of their symptoms when exposed to heat. In comparison, less data are available on the relationship between ambient meteorological conditions (e.g., temperature and relative humidity (RH)) and fluctuations in such variables in relation to MS symptoms. Thus, this study examined associations between time-lagged exposure to meteorological conditions and risk of a clinic visit due to MS among US veterans between 2010 and 2013. This study leveraged data from the Veterans Affairs (VA) and National Climactic Data Center (NCDC) for the continental US, partitioned into eight climate zones. We used a case crossover design to assess the risk of a MS clinic visit with respect to several meteorological conditions. Location-specific time-lagged daily (ambient) exposure to temperature, RH, and temperature variations (standard deviation (SD) of temperature) were computed (up to 30 days) for each case (i.e., day of MS visit) and control (a randomly assigned date ± 90–270 days prior to visit). Statistical analyses were conducted to examine independent associations between the selected meteorological conditions and risk of MS visits at the national and regional levels. A total of 533,066 patient visits received a MS diagnosis (International Classifications of Diseases (ICD)-9 code = 340). The Northeast (NE) and Upper Midwest (UMW) regions reported the highest frequency of clinic visits due to MS. Clinic visits were 9% more likely to occur in the spring, summer, and fall months (March–October) than in the winter (OR = 1.089; 95% CI = 1.076–1.103; p < 0.01). In the univariate analyses, the SD of temperature, temperature, and temperature–RH interaction were positively associated with an elevated risk of a MS clinic visit, while the RH was negatively associated with the risk for a clinic visit. In multivariate analyses, the strongest association of a MS clinic visit was observed with the SD of the temperature (OR = 1.012; 95% CI 1.008–1.017; p < 0.01). These associations between MS clinic visits and meteorological conditions varied across climate regions, with the strongest associations being observed in the LMW, UMW, DSW, and NE zones. The SD of the temperature was again the strongest associated predictor when examined regionally. Temperature variations and temperature–RH interactions (a proxy of the heat index) showed significant associations with MS clinic visits. These associations varied across climate regions when examined geographically. Our findings have implications for the management of MS in severe or recurrent cases, especially considering the impending changes in the daily temperature variations and intensity of the heatwaves expected with the intensification of global warming.
Keywords: heat waves; multiple sclerosis; climate; extreme weather; heat stress heat waves; multiple sclerosis; climate; extreme weather; heat stress

This study included all veterans who visited any US Veteran Affair hospitals and/or clinics (VA) located in the continental US between January 2010 to December 2013. All veterans who were diagnosed with MS (by International Classification of Diseases, ICD-9 340) were included in this retrospective analysis. A total of 27,290 unique patients were seen during this period with most of them having multiple visits. During this period, a total of 530,075 visits received a MS ICD-9 code. Approval was obtained from the Miami VA Institution Review Board to allow the retrospective analysis of patient data (IRB protocol number: 3011.01). The study was conducted in accordance with the principles of the Declaration of Helsinki and complied with requirements of the US Health Insurance Portability and Accountability Act.

We used a case-crossover design in which each visit (or encounter) to a VA clinic had a control on a randomly identified date between 90 to 270 days prior to the date of MS coded clinic visit. All data included the date and time of clinic visit, location of the clinic as well as patient’s demographics. All encounters were geocoded using latitude and longitude coordinates of each patient’s treatment facility. We used ArcGIS 10.8 [19] to display the distribution of MS clinic visits in the US. Since we did not have access to veteran population data for the catchment of each VA clinic/hospital, we computed MS visit encounters per 10,000 veterans visiting each clinic.

All meteorological data from 2009 to 2014 were acquired from the National Climactic Data Center (NCDC) [20]. Although the health data were from January 2010, we needed weather data for control dates randomly assigned on days within 3 and 9 months prior to the diagnosis dates. One of the main assumptions of our study is that all subjects seen in a VA clinic on a given day had the same ambient meteorological conditions around the clinic location on that day. Thus, we identified all meteorological stations within 0.75° distance (=82.5 km at equator) from the location of each clinic, and then computed daily averages and standard deviations (SD) of hourly measurements of the selected meteorological conditions for each day. Based on date and zip code both meteorological and clinical data were integrated, assigning daily meteorological data to all MS visits a VA clinic on a given day and corresponding controls days. Once the data were collocated, daily time-lagged exposures were computed for all (clinic) encounters who received multiple sclerosis diagnosis (MS clinic visits here to after) and controls for up to 30 days. In mathematical form, if xijt is a meteorological condition, x, at/around a given zip code, j, on a given day, t, then time-lagged exposure for a given lag (l) is xij(t-l), i.e., the meteorological condition lth day before the diagnosis day for an encounter and the day randomly chosen as a control for a given MS visit.

All analyses were conducted in STATA (StataCorp LLC, College Station, TX, USA) [21]. We conducted three sets of analyses: descriptive analyses of MS clinic visits by seasons and climate regions, multivariate analyses of the associations of meteorological conditions with MS clinic visits and variations in the associations of meteorological conditions (1) ambient temperature, (2) standard deviation (SD) of temperature [a proxy of temperature variation], (3) relative humidity (RH), and 4) temperature-RH interaction [a proxy of heat index] with MS clinic visits across climate regions in the US. We then stratified zip codes based on the eight climate regions: Desert Southwest (DSW), Lower Midwest (LMW), Northeast (NE), Pacific Northwest (PNW), Pacific Southwest (PSW), Southeast (SE), Subtropical (ST) and Upper Midwest (UMW). We conducted analyses for each climate region separately to assess region-specific association of time-lagged meteorological conditions with MS clinic visits. We used multivariate logistic regression adjusting for seasonality and weekday/weekend effects. We used cluster option for zip code and day assuming correlation in the occurrence of MS clinic visits within a zip code on a given day, and computed robust standard error (see logit function in STATA with cluster and robust options) [21]. We computed model parameters for each lag separately. Thus, we computed coefficients of each variable for each lag up to 30 days, which allowed us to examine changes in associations of meteorological conditions with the increase in time lag. For all models, statistical significance was considered at p ≤ 0.05, and likelihood of the occurrence of MS visit was reported as odds ratio (OR) with corresponding 95% confidence intervals (CI).

Ambient meteorological conditions are associated with MS symptoms. Our analyses suggest that a sudden increase in ambient temperature and a simultaneous increase in both temperature and relative humidity elevate the risk of MS clinic visits, a proxy measure of adverse MS symptoms. These associations between MS clinic visits and meteorological conditions varied across climate regions, suggesting variations in adaptation to region-specific climatic conditions. Increasing frequency and intensity of extreme weathers patterns, such as heatwaves, drought and hurricanes, are likely to increase the burden of MS disease in the absence of adaptive management strategies. The findings of this research can guide region-specific strategies to manage MS and associated comorbidities, such as providing timely data on heat advisory and sudden changes in local weather patterns to MS patients as well as healthcare providers.

The following are available online at https://www.mdpi.com/article/10.3390/ijerph18115962/s1, Table S1: Region specific associations between MS clinic/hospital visits by the US veterans and daily lagged meteorological conditions in the United States, 2010–2013—a univariate analysis adjusted for weekend/weekday effect.

This work was approved by the Miami Veteran Affair’s Institutional Review Board (protocol number: 3011.01).

The study team only analyzed secondary data and did not have any contact with subjects, no informed consent was acquired.

Data used in the research were confidential and cannot be shared outside our research team as required by the Miami VA Institutional Review Board.

The authors declare no conflict of interest, and the funders had no role in the design of the study; in the collection, analyses, or interpretation of the data; in the writing of the manuscript; or in the decision to publish the results. 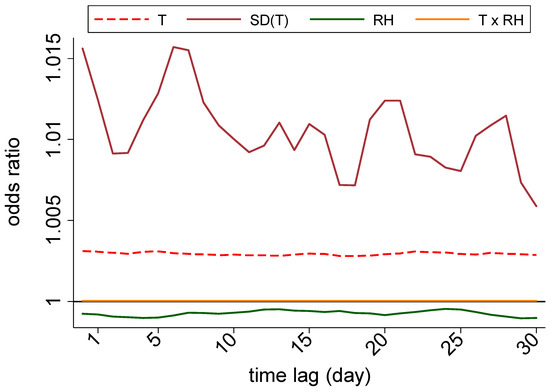