Neuropsychological Pattern in a Series of Post-Acute COVID-19 Patients in a Rehabilitation Unit: Retrospective Analysis and Correlation with Functional Outcomes
Next Article in Special Issue

Relationship between the Toothbrushing Behavior and Hand Hygiene Practices of Korean Adolescents: A Study Focused on the 15th Korea Youth Risk Behavior Survey Conducted in 2019
Previous Article in Special Issue

In general, the elaboration of the synthesis of water quality in Romania is based on the processing of a large volume of information coming from primary analytical data collected with a constant frequency by the organisms with a specific role in water quality monitoring. This study proposes a novel methodology for multi-criteria analysis aiming to evaluate the degradation state of lake ecosystems. The cornerstone of the newly presented methodology is a geographic information system (GIS) automated tool, involving the assessment of potential degradation sources affecting the watershed that supply the lakes with water. The methodology was tested by performing an analysis on 30 lakes in Romania. The lakes belong to different geographical areas, owing various natural specific conditions and were selected to fit to various types and specific local conditions. The calculation of the WRASTIC-HI (Wastewater–Recreation–Agriculture–Size–Transportation–Industry–Cover–Hazard Index) revealed that, out of 30 lake ecosystems selected as the case study, two lakes were fully degraded, 24 lakes were semi-degraded, and four were in a natural state. The four lakes characterised by a natural state are located in mountainous regions or in the Danube Delta. The results obtained on the selected lakes proved that the proposed index calculation corresponded in all case studies to the real field situation, highlighting thus the accuracy of the assessing process and increased advantages of the assessment’s automation.
Keywords: degradation state; GIS; lake ecosystem; multi-criteria analysis; Romania degradation state; GIS; lake ecosystem; multi-criteria analysis; Romania

Terrestrial and aquatic ecosystems offer a series of services which contribute to human well-being [1], defined as a series of benefits obtained from these natural ecosystems [2,3] and refer to provisioning services, regulating services, cultural services and supporting services [2]. However, ecosystems are permanently subjected to degradation, as a result of diversification of anthropic activities for the purpose of satisfying the human needs, including by use of resources offered [4]. Recently, a non-sustainable use of ecosystemic services at world level has been recorded [5,6]. The degradation of natural habitats, including aquatic ecosystems, represents the most important cause of loss of biodiversity [6]. The main indirect causes of degradation of aquatic ecosystems, including lake ecosystems are represented by the increase of population and economic development [7], with direct effects on species and reduction of populations of species. These two drivers are directly linked to the development of infrastructure, change of land cover, overexploitation and the introduction of invasive allogeneic species [2,8,9], drainage and irrigation systems, and chemical pollutants [10,11,12]. The aquatic ecosystems, including lakes ecosystems, are also affected by climate change, the seasonal thermal stratification of lakes being modified over time [13,14].
Preoccupations of decision-makers regarding evaluation of degradation and reconstruction of water bodies’ conditions materialized in the elaboration of strategies and policies in the field at a global scale [15]. The European Union (EU) Water Framework Directive establishes a common framework for implementation of actions at community level in the field of water-related policies It establishes a common framework for the sustainable and integrated management of all water bodies (groundwater, inland surface waters, transitional waters and coastal waters) and requires that all impact factors as well as economic implications be taken into account [16,17]. In Romania, provisions of this directive were transposed into national legislation by the no. 107 Law of 1996, amended and updated in 2015 by the no. 196 Law [18].
Later on, in 2013, in order to evaluate the changes in the ecosystems, the EU created a strategic framework through the VIIth Program of Action for Environment [19]. At EU level, according to the results of evaluation carried out in 2015, conservation status of habitats and species was still not adequate requiring significant efforts to achieve targets set in EU Biodiversity Strategy to 2020 [20]. The protection and preservation of species and habitats of community importance represented the main objective of the European Union with regard to biodiversity preservation strategy [21]. This strategy aimed at maintenance and reconstruction of ecosystems and their services and reducing the loss of natural habitats, including rivers and lake ecosystems. The European Strategy for Biodiversity (2011–2020) took over the Aichi targets for biodiversity set in the Convention for Biological Diversity [22].
The EU’s new biodiversity strategy for 2030 was released in May 2020. This strategy and its associated action plan represent a comprehensive, ambitious, long-term plan to protect nature and reverse ecosystem degradation [23]. This strategy makes reference to the Water Framework Directive objective to reach a good ecological status by 2027 for all EU rivers, lakes, transitional and coastal waters including wetlands.
Therefore, to be able to translate into practice the objectives of the latest EU action plans towards transition to a more sustainable society (including the Biodiversity Strategy released in 2020) it is necessary to evaluate the changes induced by humans in ecosystems. This will help in understanding where the transformations were caused and at what scale [24], and to properly design the actions that should be implemented for the reduction of negative effects.
The purpose of this study is to elaborate a methodology by which the evaluation of state of degradation for lake ecosystems from Romania can be undertaken using geographic information system (GIS) techniques, a methodology that can be further used at an even wider scale, regardless of the type and territorial localization of lakes. This study was aimed at (i) creating an automated GIS specific tool to determine degree of degradation of lake ecosystems and, furthermore, their integration in one of the degradation classes (degraded, semi-degraded and natural), and (ii) testing and validating proposed methodology on relevant case studies selected from Romania.

The data structure design and the processing methodology is presented in Supplementary Table S1.
Mapping of the lake ecosystems was done in accordance with the classification system of habitats European Nature Information System (EUNIS) level 2, in which lake ecosystem is considered to be a water surface area [25] formed by two major components: pelagic area and seaside area. Riparian zone was not included in delimitation process, although it has certain important structures and functions [26,27], but some characteristics of riparian ecosystems were used for assessing the state of lake ecosystems. Type and source of used data as well as the intermediary data processing, are listed in Table 1.

2.2. Indicators Used to Assess the Level of Degradation for Lake Ecosystems

2.3. Calculation of the Indicators to Assess the Degradation State of Lake Ecosystems

2.4. Validation of the Proposed Methodology

In order to validate the proposed methodology, we have calculated the newly developed index for 30 lakes situated on Romanian territory. These lakes were selected to fit to various types described above and to specific local conditions.
The assessed lakes are listed in Table 6 and illustrated in Figure 3. The validation of the results was undertaken based on the cartographic support, topographic maps scale 1: 25,000, and with the aid of orthomosaics and satellite images.

The proposed methodology is based on multi-criteria analysis and GIS techniques and used open-source data which transforms it into a very useful tool when intending to assess ecosystems on large areas, at national or even European level, with reduced time and financial effort, taking into account that field analyses are difficult to be conducted at these levels, even if they could provide studies with increased accuracy. However, like any automated instrument which uses derivative data and work flows, the accuracy of results depends on the accuracy and detail level of the databases used. The methodology could be also applied at local level, in this cases input data could be achieved through field investigations and thus results could be even more improved. As such, the higher the degree of confidence of input based data, the higher the accuracy of results.
The methodology was tested and validated on 30 lake ecosystems in Romania, the results of index calculation corresponded in all case studies to the real field situation, highlighting thus the accuracy of the assessing process and increased advantages of assessment’s automation. 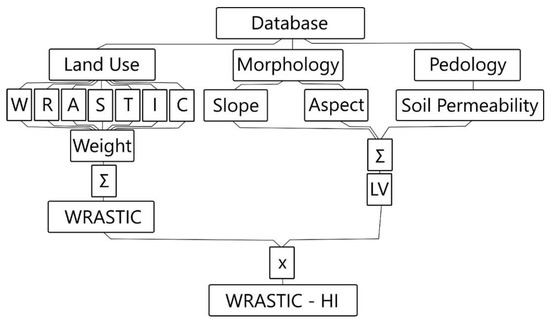 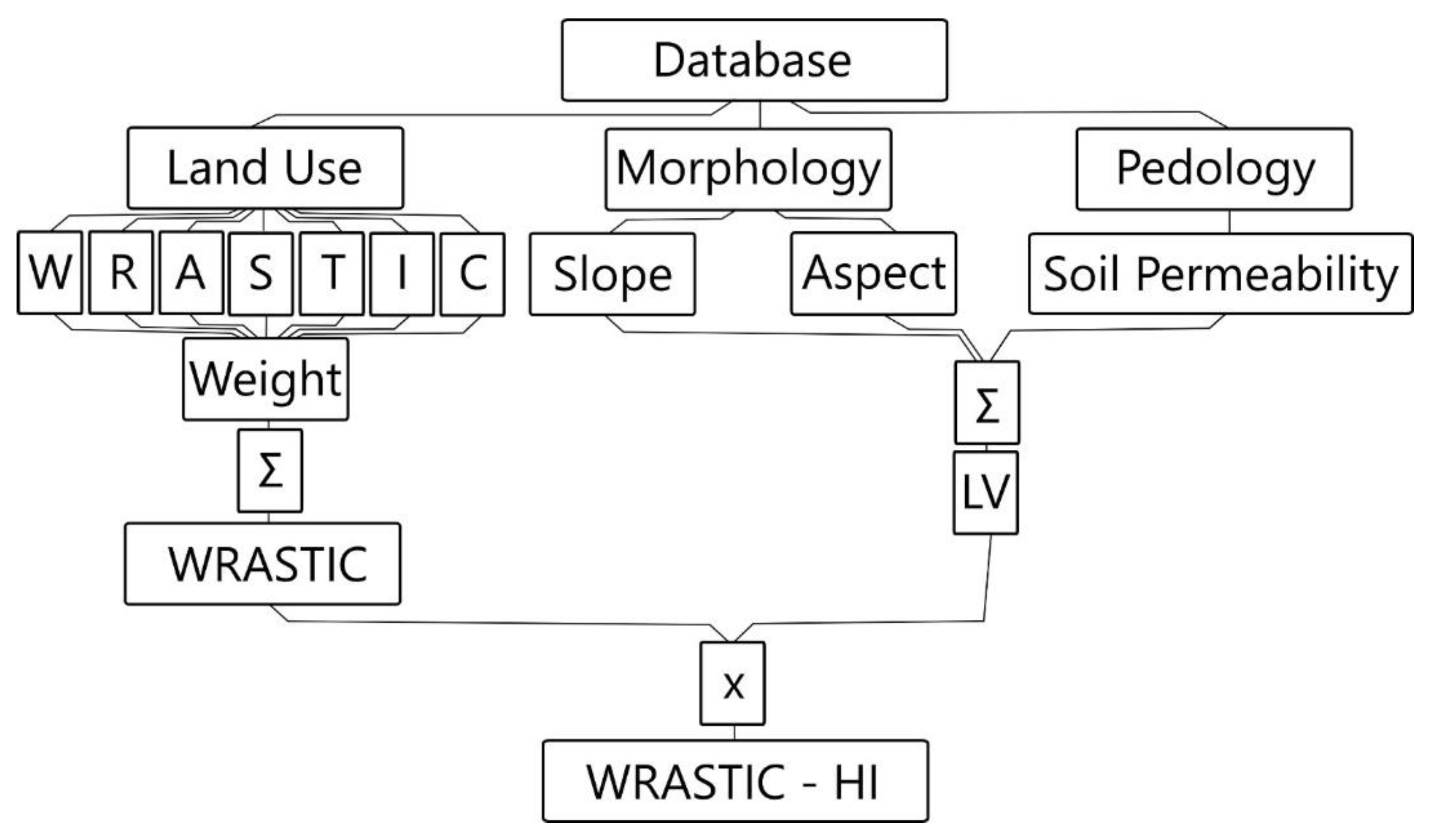 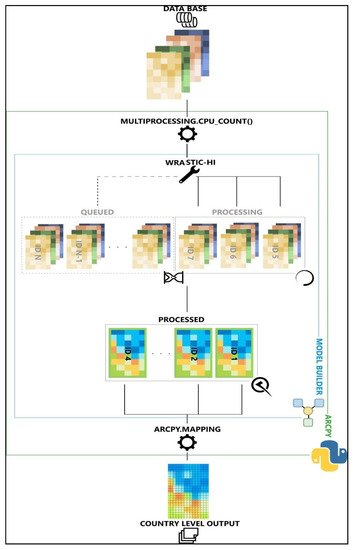 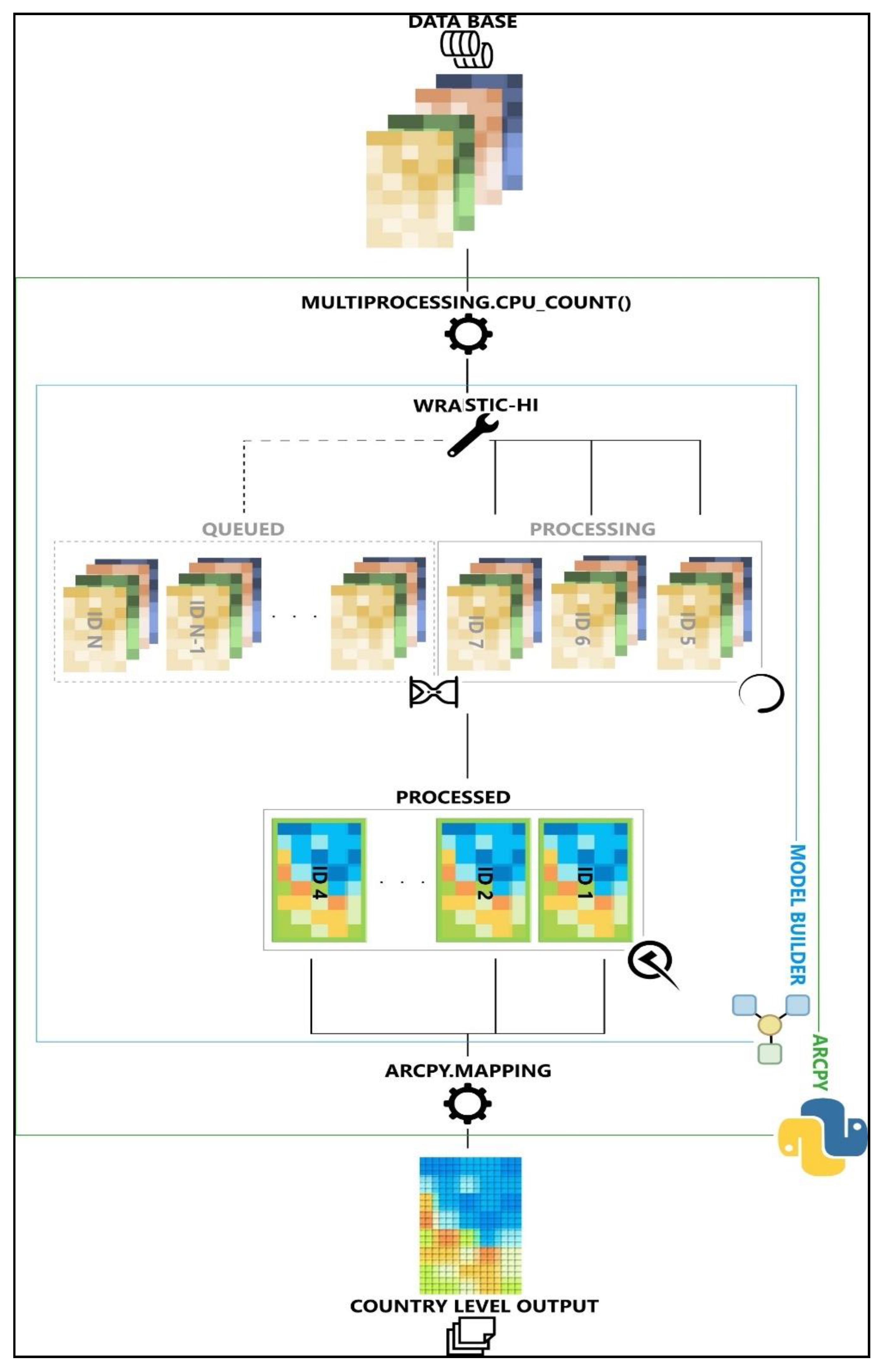 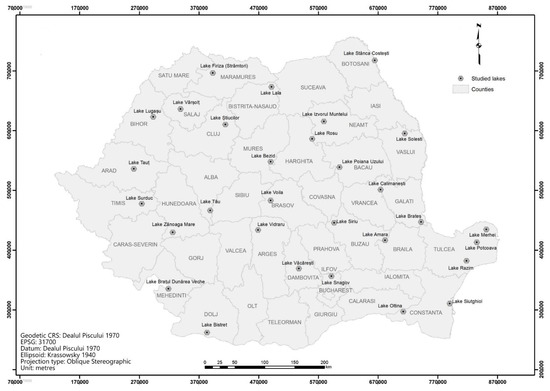 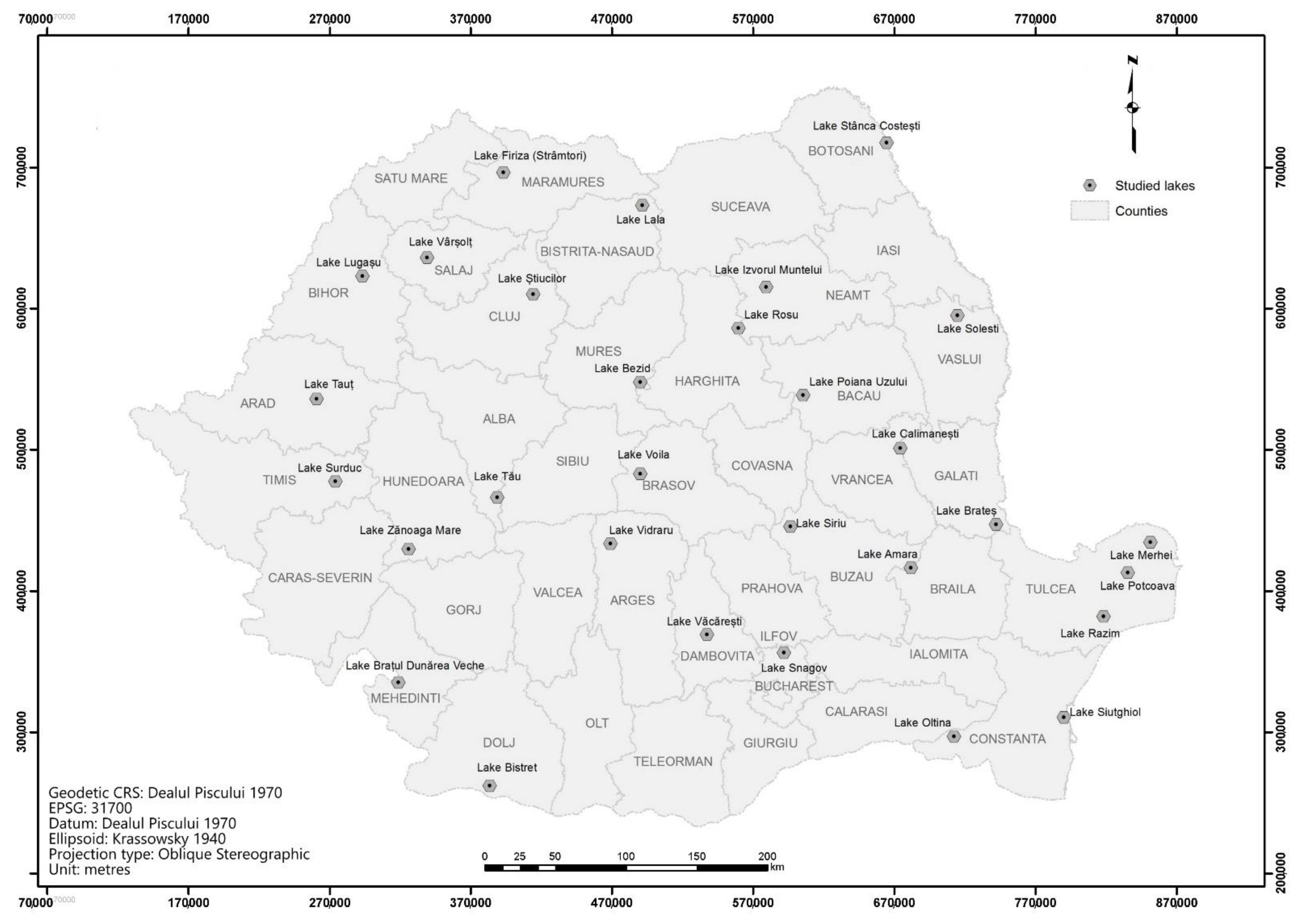 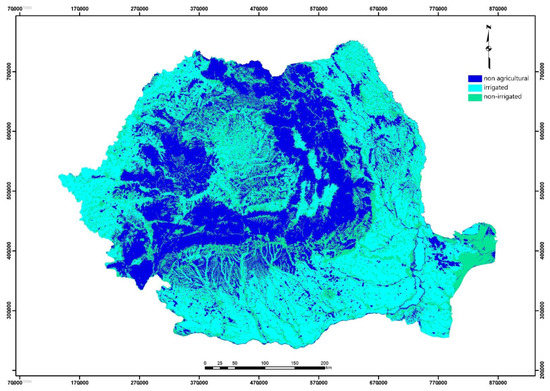 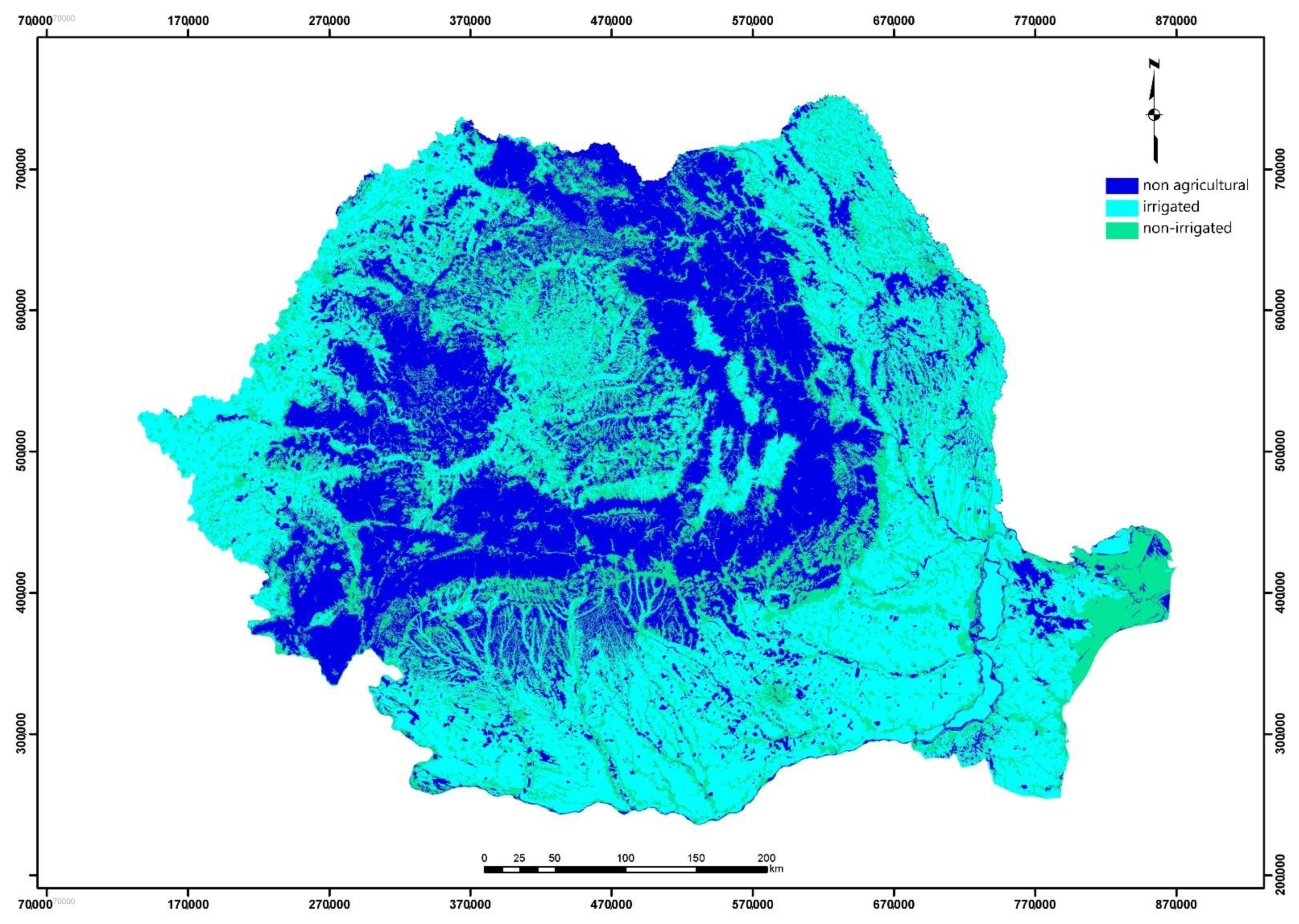 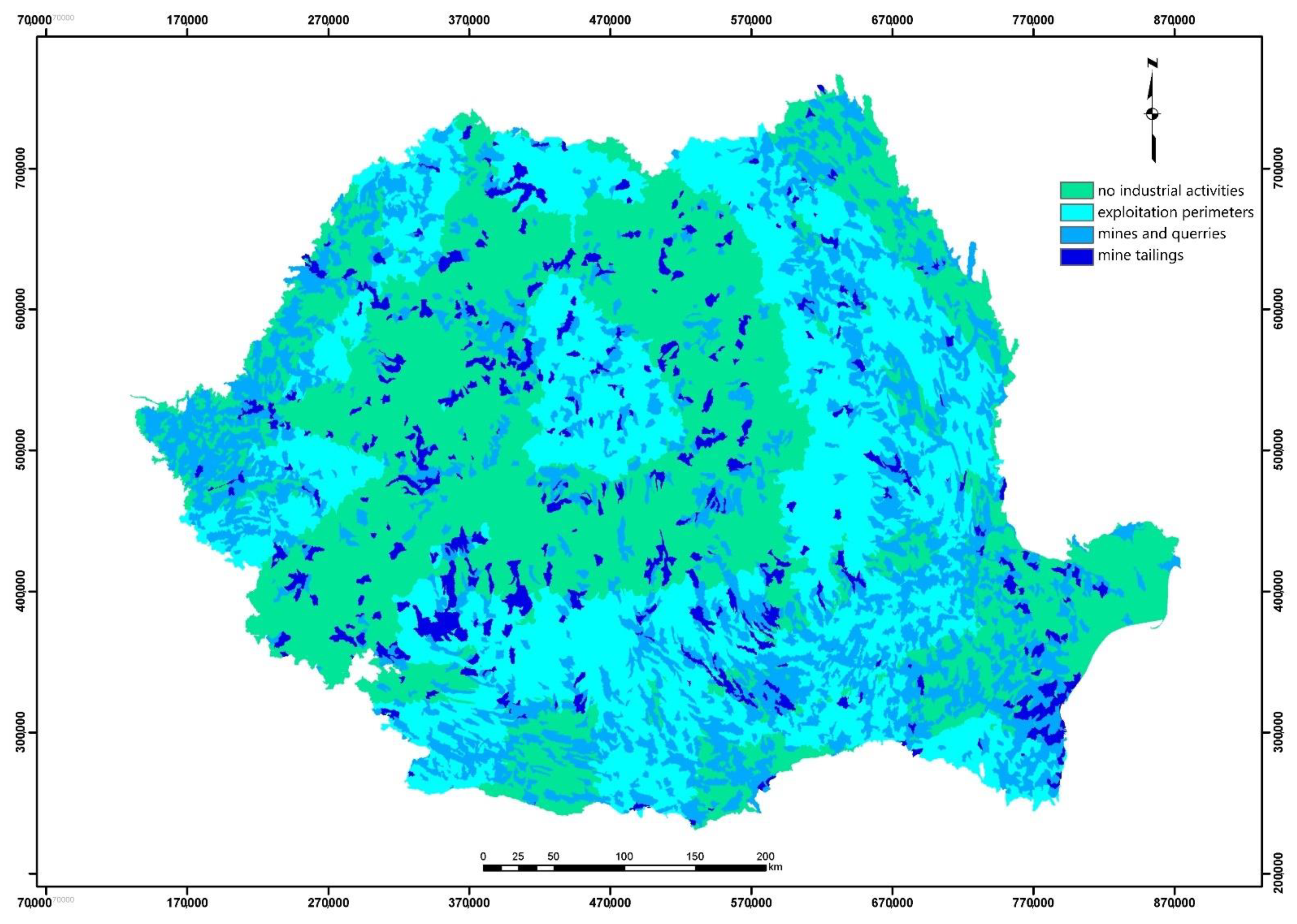 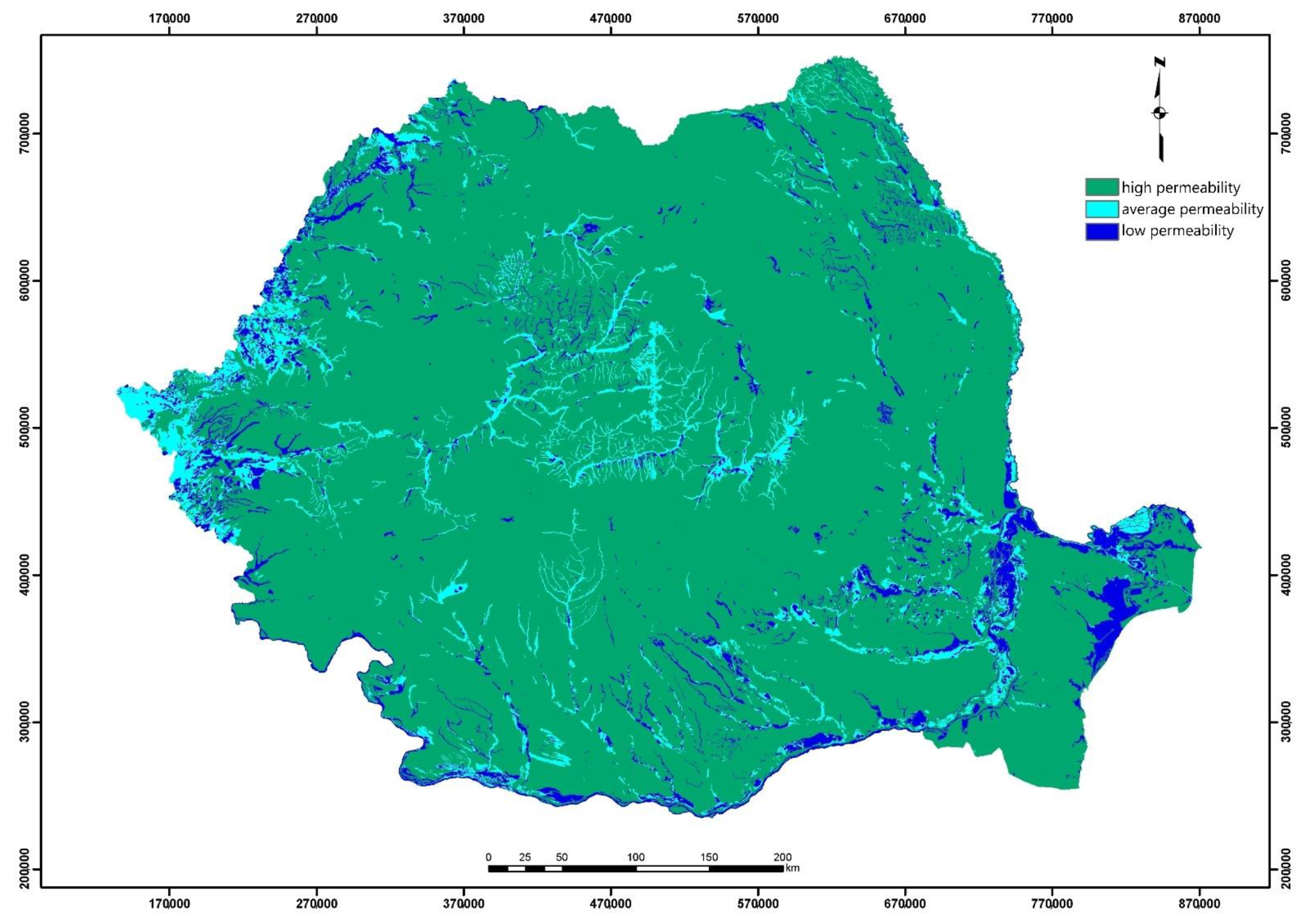 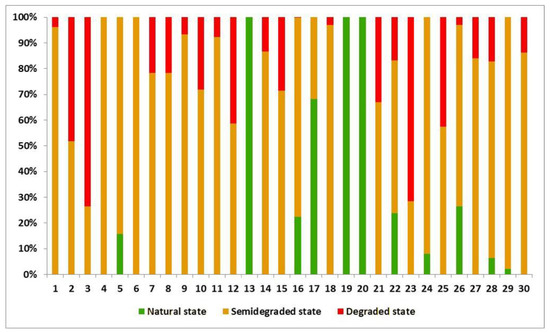 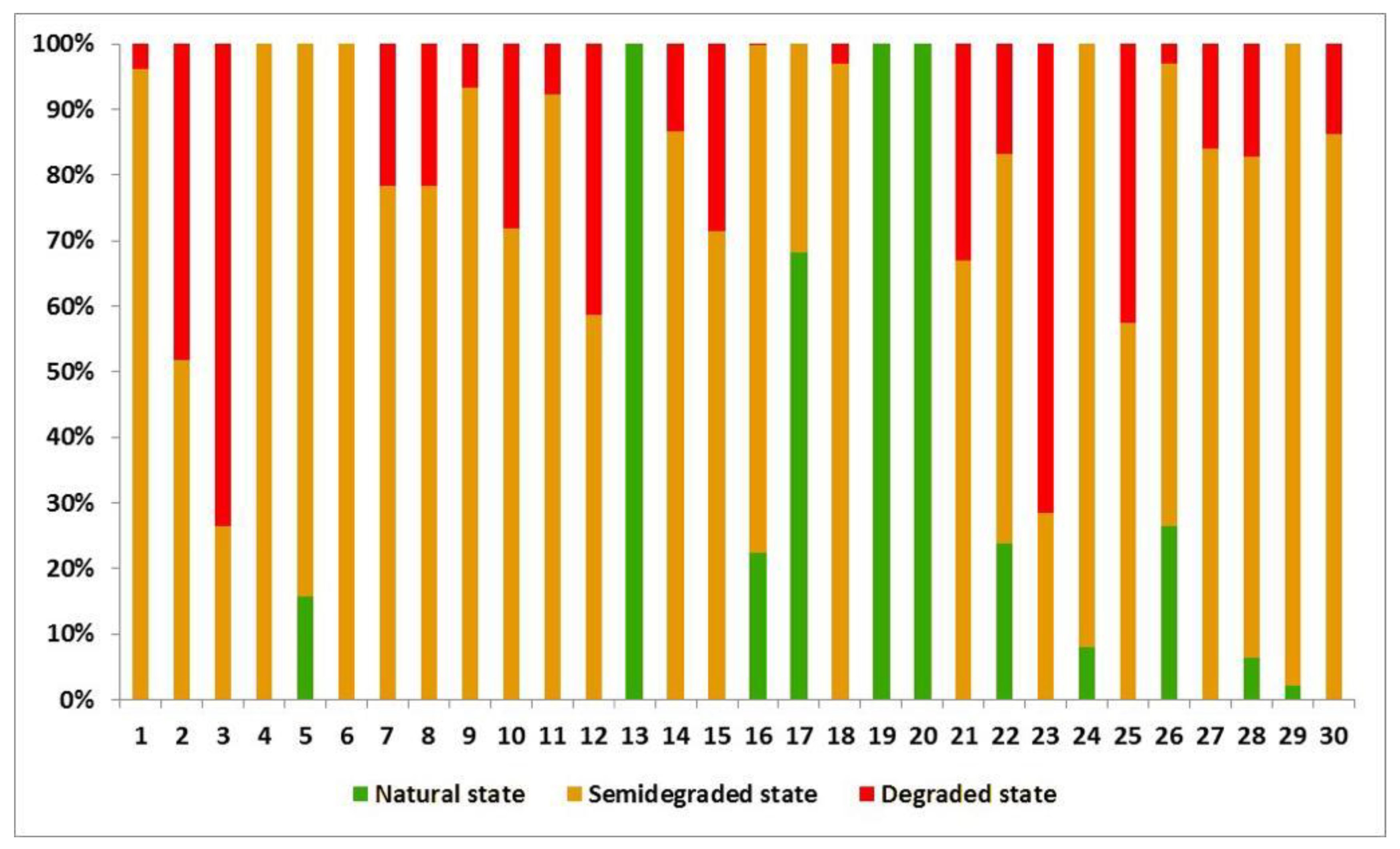 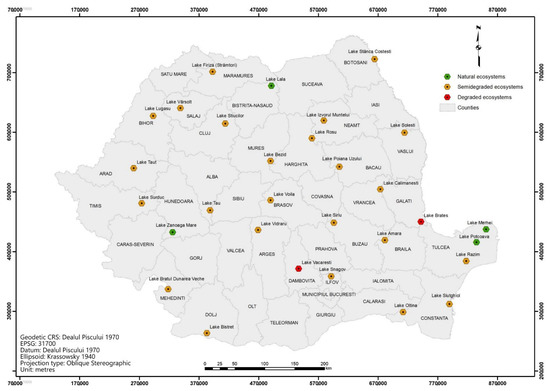 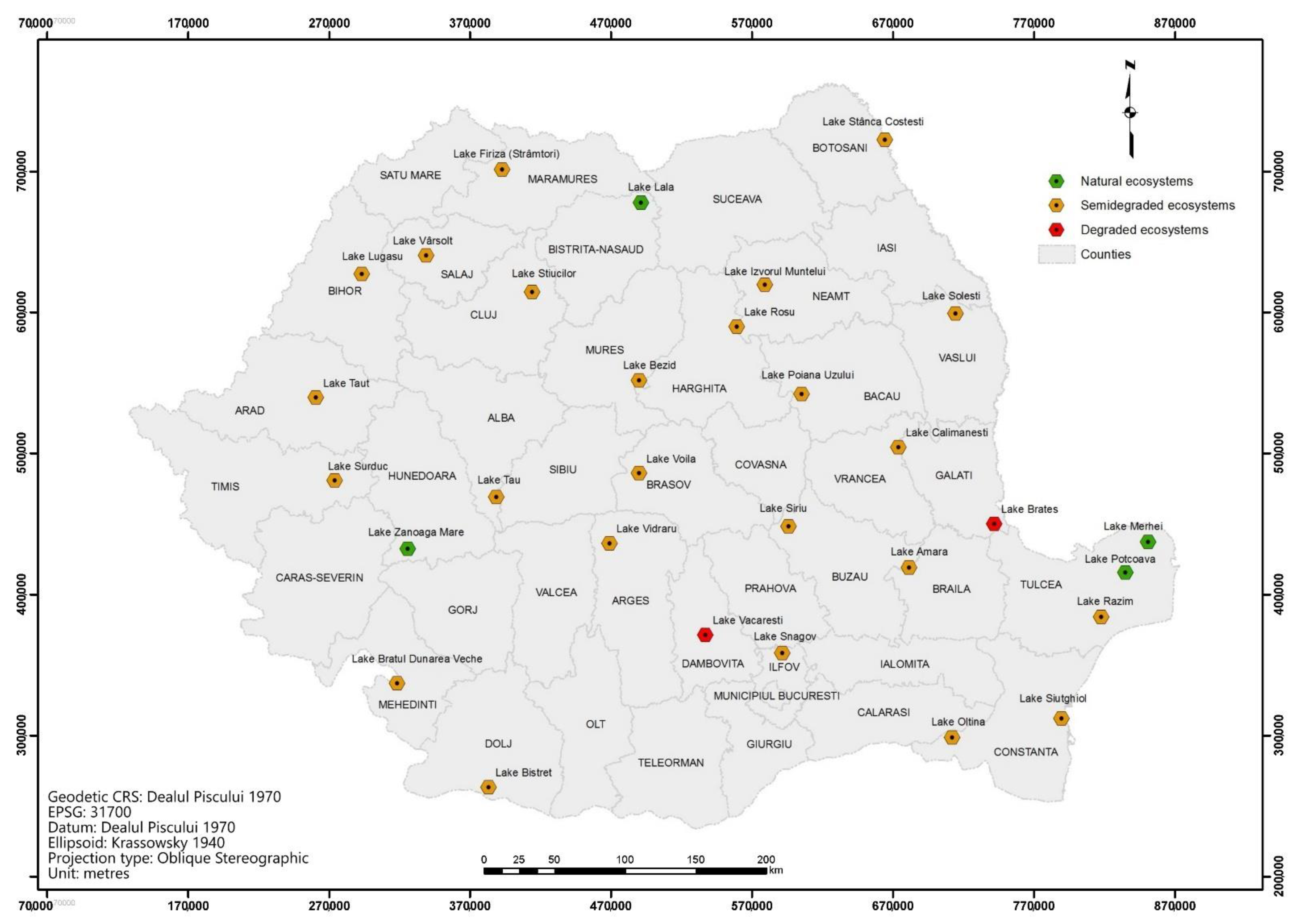 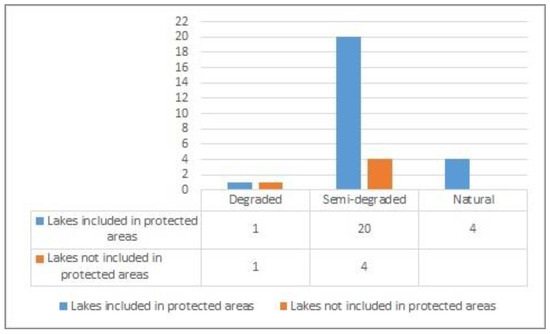 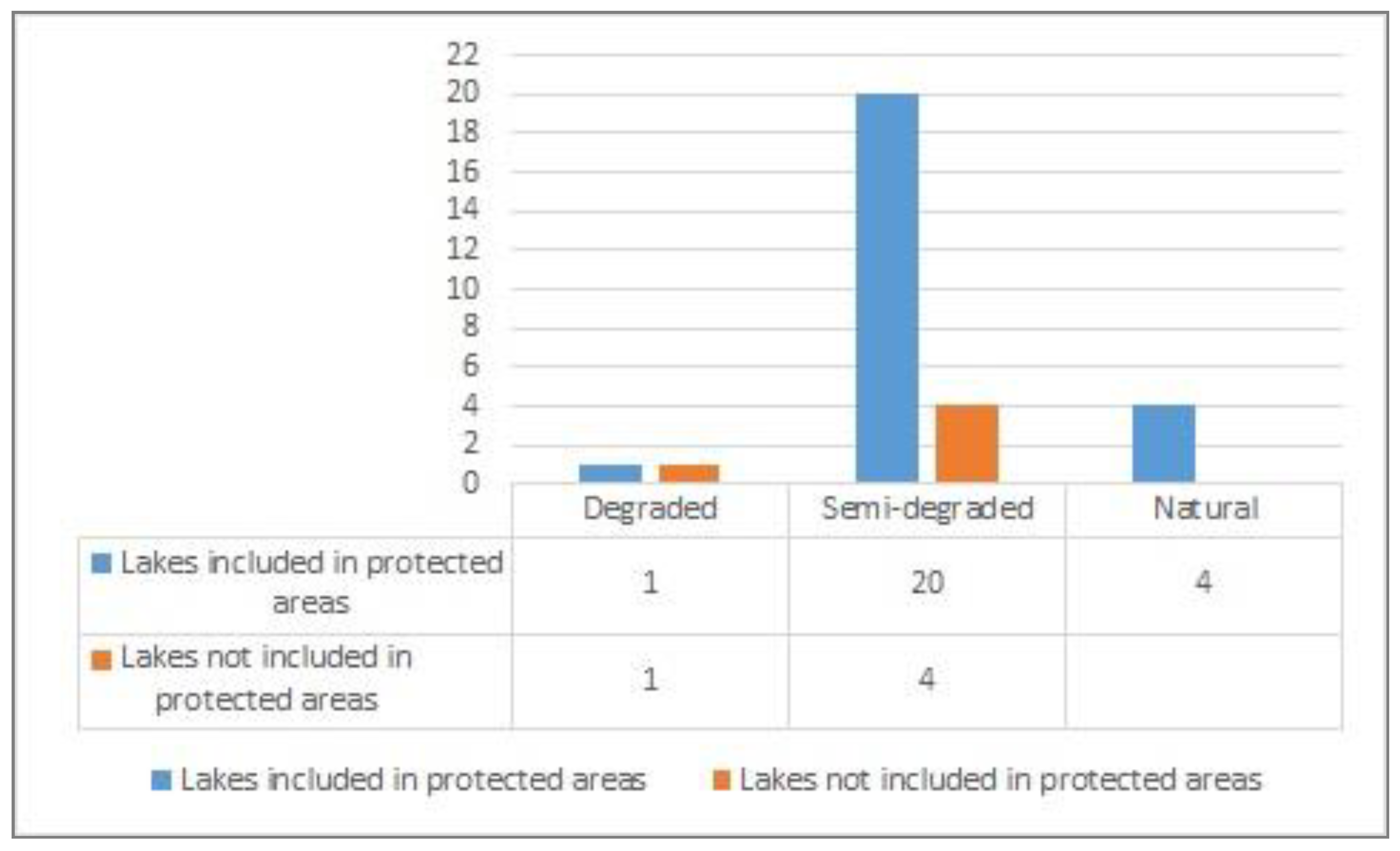 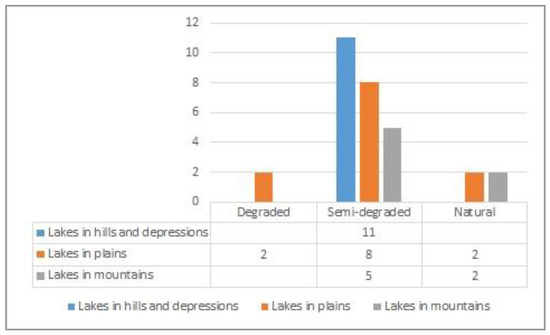 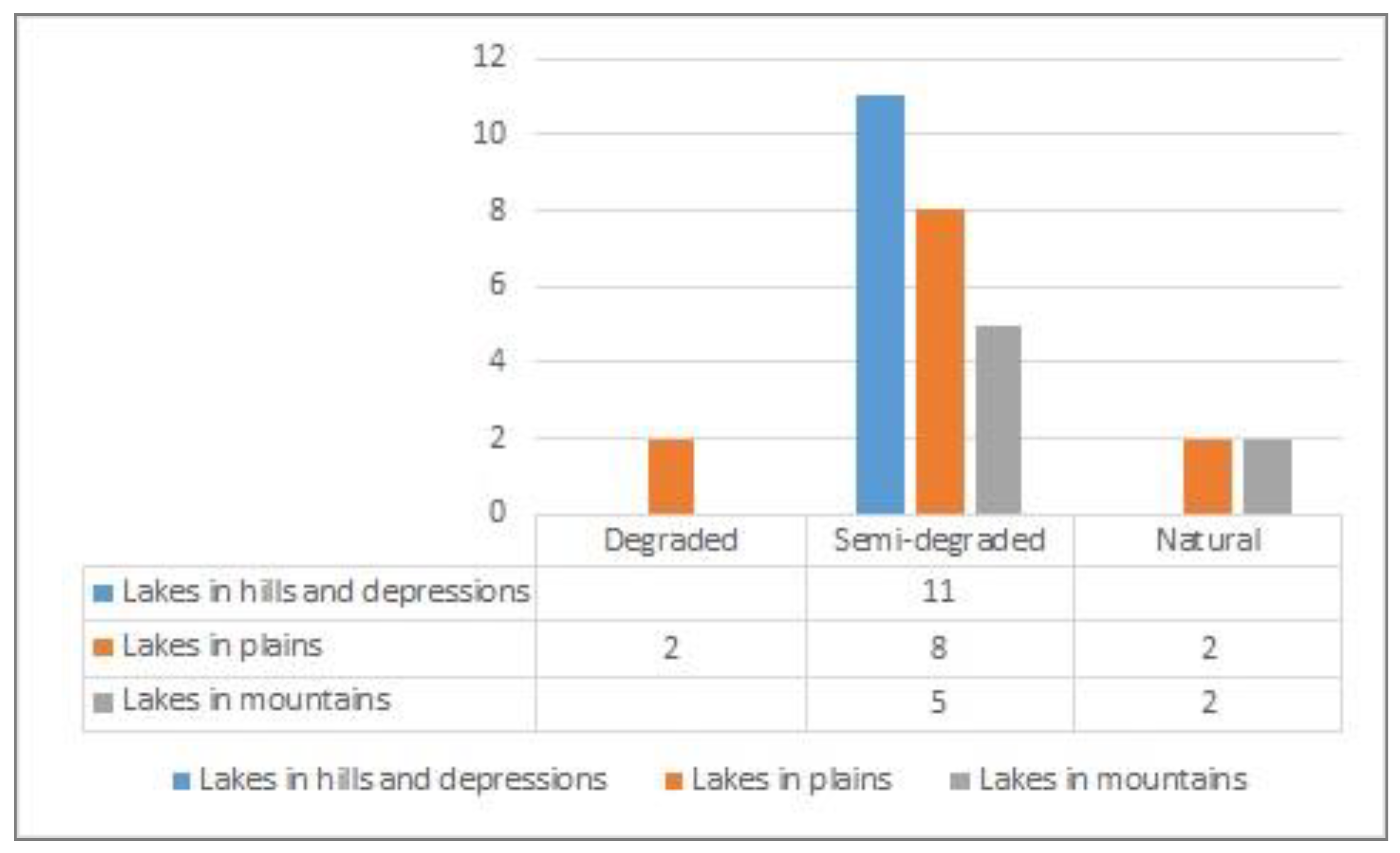