Texture-Modified Food for Dysphagic Patients: A Comprehensive Review
Next Article in Special Issue

Assessing Factors Associated with TB Awareness in Nepal: A National and Subnational Study

:
Tuberculosis (TB) has still remained a serious global health threat in low- and middle-income countries in recent years. As of 2021, Nepal is one of the high TB burden countries, with an increasing prevalence of cases. This study evaluates factors associated with TB awareness in Nepal. This study uses data from the Nepal Demographic and Health Survey, a cross-sectional survey carried out from June 2016 to January 2017. Multilevel logistic regression is performed to examine the association of demographic and socioeconomic factors with TB awareness. Our findings show a high level of TB awareness in all seven provinces of Nepal. Province 5 has the highest level of awareness (98.1%) among all provinces, followed by provinces 3 and 4, while province 6 has the lowest awareness level (93.2%) compared to others. Socioeconomic factors such as wealth, education and owning a mobile phone are significantly associated with TB awareness. Socioeconomic determinants are influential factors associated with TB awareness in Nepal. The wide variation in the proportion of awareness at a regional level emphasizes the importance of formulating tailored strategies to increase TB awareness. For instance, the use of mobile phones could be an effective strategy to promote TB awareness at a regional level. This study provides valuable evidence to support further research on the contribution of information and communication technology (ICT) usage to improving TB awareness in Nepal.
Keywords:
awareness of tuberculosis; TB symptoms; TB knowledge

Tuberculosis (TB) has long been considered a critical infectious disease [1]. In 2019, 10 million people developed TB, leading to 1.4 million TB deaths worldwide [2]. The WHO Global TB Report 2020 found that 98% of the world’s registered TB cases were in low- and middle-income countries (LMICs) [2]. In LMICs, low awareness of TB is one of the leading risk factors for high prevalence [3]. Lack of TB awareness has become a severe social concern affecting population health, given the risk of spread of TB [4]. Inadequate knowledge about TB leads to further transmission and delay in diagnoses and treatment [5]. There are 3.6 million people with TB who are undiagnosed and hence do not receive treatment from healthcare facilities in LMICs [6]. As can be seen in the case of India, due to low TB awareness, diagnosis and treatment of TB have been delayed, leading to an increased probability of further spread of TB in the community [7].
In 1965, the national TB program (NTP) of Nepal was implemented by the Nepalese government in collaboration with the WHO and the United Nations International Children’s Emergency Fund (UNICEF). The main aim of the program is to effectively monitor and control TB incidence and prevalence and ensure better access to quality TB treatment services in Nepal [8]. Since 2006, almost 85% of TB cases in Nepal have been successfully treated through the NTP, and the incidence of TB has decreased gradually, by 3% per year until 2019 [9]. Despite efforts made by government and international organizations to end TB, around 40% of Nepalese participants in the End TB program did not seek TB care and treatment, according to Nepal’s 2018 national TB prevalence survey [9]. The results of the national survey indicate that there is inadequate knowledge of access to TB health services; thus, there is a need to increase awareness of the availability of quality TB diagnostics, care and treatment [6,8]. National health policy priorities include: achievement of the main goal, TB elimination; reducing the numbers of new TB cases and TB deaths (by enhancing TB awareness among the entire Nepalese population); removal of barriers to equitable access to TB treatment and care, to improve community wellbeing in regional Nepal [10]. All of those targets were set by the NTP at the central level and at local levels as well, in accordance with the goal of the national strategic plan, to End TB by 2030 in Nepal [8,10].
The level of TB awareness is associated with various demographic and socioeconomic factors such as education level, socioeconomic status and area of residence [8,11]. Low public awareness of and knowledge about TB have been identified as correlated with several socioeconomic factors including family income, education level and gender [12]. In addition, enhanced awareness of TB could improve access to appropriate treatment and better outcomes, especially in socioeconomically vulnerable groups—who have limited access to information about TB due to weak community engagement—and certain areas of residence. [13,14]. In LMICs, including Nepal, specific locations and places at greater distances from TB treatment facilities are susceptible to poor community TB awareness and weak adherence to TB treatment as a health-seeking behavior [15,16]. Examining the demographic and socioeconomic factors associated with TB awareness is important for understanding the socioeconomic gaps that can help to drive infectious TB control in the work to eliminate TB [12,17]. However, few studies have analyzed the magnitude of the associated factors at national and subnational levels in Nepal. Hence, the aim of our study is to evaluate the relationship between TB awareness and demographic and socioeconomic factors at national and subnational levels in Nepal.

In our study, we used data from the Nepal Demographic & Health Survey (NDHS) 2016. The NDHS is a nationally representative population-based cross-sectional household survey that obtains socioeconomic and disease-specific questionnaire information, including knowledge, attitudes and behaviors related to TB. The data was collected from June 2016 to January 2017. The overall response rate of the survey was 98.5%. We studied the data of individual household questionnaire responses for respondents aged 15–49 years. Privacy of household members was thoroughly ensured [18].

Awareness of TB contributes to enhancing understanding of screening necessity, knowledge of good access to health facilities, completion of treatment as per programmatic management, and monitoring and supervision via community engagement; these factors have effective impacts on reducing TB cases [19,20]. The outcome variable included in our study of TB awareness was defined as people knowing about TB symptoms and having knowledge of TB treatment facilities. We considered access to healthcare services as a control variable in the analysis. The covariates included in our study were wealth quantiles, education, place of residence (urban and rural), province and owning a mobile phone. We selected the covariates based on previous empirical studies conducted in similar settings [12,21].

We used descriptive statistics to analyze respondents’ demographic and socioeconomic characteristics. A multilevel regression model was used to explain the relationship between outcome variables and covariates. The data from the NDHS are nested in multiple levels, i.e., hierarchical in nature. Therefore, we used a multilevel regression model with a random intercept at a cluster level to account for the cluster-level effect in our analysis. The selection of covariates for the multilevel model was based on the significant results obtained from the univariate regression analysis. Both descriptive and multilevel regression analyses were adjusted to the complex survey design using sample weighting. Data were analyzed using STATA 16 (StataCrop LLC, College Station, TX, USA) and R 4.0.3 (The R Foundation for Statistical Computing, Indianapolis, IN, USA).

3.1. Summary of Socio-Demographic Characteristics of Respondents

3.2. Proportion of People with TB Awareness at a Subnational Level in Nepal

The overall TB awareness at subnational levels in Nepal was above 90% across all provinces. Province 5 has the highest proportion of TB awareness (98.3%), followed by provinces 3 and 4 (97.4%); province 6 has the lowest awareness of all (93%) (Figure 1 & Appendix A Table A1).

The results of multilevel logistic regressions with a 95% confidence interval (CI), the odds ratio (OR) and respective p-values are presented in Table 2.
The odds of TB awareness among people in the richest quantile was 3.46 (95% CI 2.05–5.84) times higher compared to those in the poorest wealth quantile. In addition, the middle wealth quantile was also significantly related to TB awareness (OR 2.06, 95% CI 1.44–2.94). Respondents with higher education had significantly higher TB awareness (OR 16.19, 95% CI 8.04–32.58). Similarly, people with secondary level education had 5.36 (95% CI 3.76–7.65) times higher odds of being aware of TB compared to those with no formal education. Owning a mobile phone was significantly associated with TB awareness. Individuals owning a mobile phone had 1.66 (95% CI 1.30–2.10) times higher odds of being aware than those who did not own a mobile phone. Participants residing in province 5 were 2.24 (95% CI 1.26–3.97) times more likely to be aware of TB than those residing in province 6, which has the lowest proportion of TB awareness (Appendix B Figure A1).

Our study examined the demographic and socioeconomic factors associated with TB awareness at the national and subnational levels in Nepal. The results of the study highlighted that socioeconomic determinants such as wealth quintile, level of education, and owning a mobile phone were significantly associated with TB awareness at the national and regional levels. The high level of awareness at a regional level emphasizes the importance of formulating tailored strategies to increase TB awareness. The use of mobile phones could be an effective strategy to promote TB awareness at a regional level. The policy implementation of a mobile-focused approach for medical infrastructure could improve TB awareness and access to treatment, effectively and affordably. This study provides valuable evidence to support further research on the contribution of ICT usage to improving TB awareness in Nepal. Further research is required to understand the possible mechanisms that affect the underlying factors determining TB awareness in the context of Nepal, to help to promote and support TB elimination in Nepal.

The datasets analyzed during the study are available in the Demographic and Health Surveys of the DHS repository, https://dhsprogram.com/data/dataset/Nepal_Standard-DHS_2016.cfm?flag=0 (accessed on 3 February 2021).

We would like to thank Jeevan Bahadur Sherchand, Rohita Gauchand Thakali and Takayuki Hayashi for giving kind assistance and a variety of suggestions. 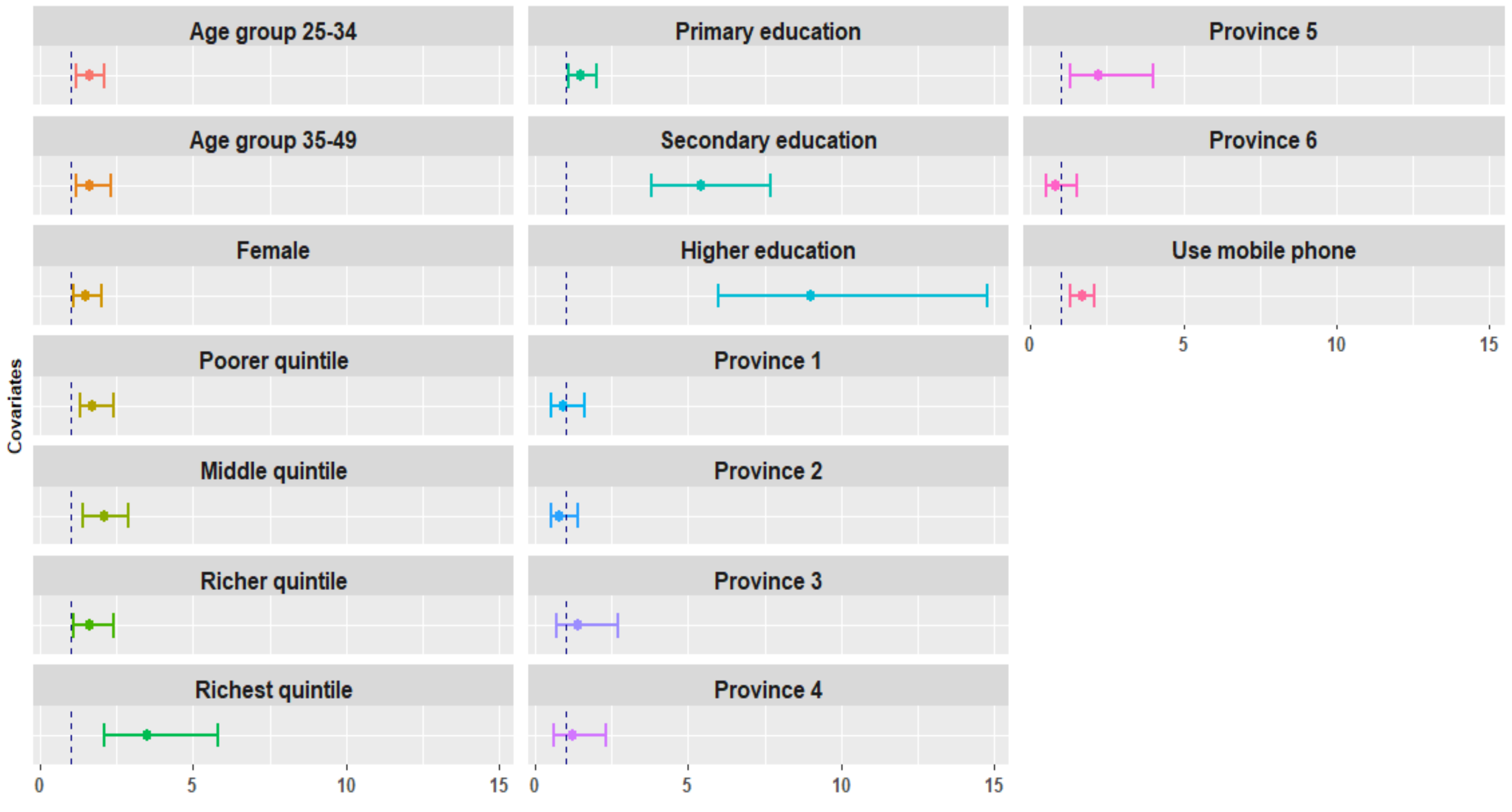