Uncovering the Role of Different Instructional Designs When Learning Tactical Scenes of Play through Dynamic Visualizations: A Systematic Review
Next Article in Special Issue

Satisfaction with Life, Emotions, and Identity Processes in Polish First-Time Mothers and Fathers and Their Child’s Age
Previous Article in Journal

Searching for General Model of Conspiracy Theories and Its Implication for Public Health Policy: Analysis of the Impacts of Political, Psychological, Structural Factors on Conspiracy Beliefs about the COVID-19 Pandemic
Previous Article in Special Issue

Creative Music Therapy with Premature Infants and Their Parents: A Mixed-Method Pilot Study on Parents’ Anxiety, Stress and Depressive Symptoms and Parent–Infant Attachment

Premature birth is stressful for infants and parents and can adversely affect the parent–infant dyad. This mixed-methods pilot study evaluates whether creative music therapy (CMT) can alleviate anxiety, stress, and depressive symptoms in parents and support the bonding process with their infant. Sixteen parent couples were included. Ten couples were randomly allocated to the music therapy group (MTG) and six to the control group (CG). All couples completed psychological questionnaires measuring anxiety and depressive symptoms as well as an implicit measure of parent–infant attachment at two weeks postpartum (T1), at approximate neonatal intensive care unit (NICU) hospitalization halftime (T2), and two weeks after the infant had been discharged (T3). At T1 and T2, the parents additionally completed a questionnaire assessing the degree of stress they experienced at the NICU. Qualitative data were collected through a semi-structured, problem-centered interview with MTG parents at T3. The results of the quantitative analyses revealed reductions in anxiety levels from T1 to T2 (p = 0.002) as well as decreases in depressive symptoms from T2 to T3 (p = 0.022). No such changes were apparent in the CG. In fact, parental stress increased from T1 to T2 (p = 0.016). Significant increases in attachment across time were also observed within the MTG, but not in the CG. The qualitative inquiry confirmed that CMT can support the parent–infant relationship. Being in musical interaction evoked feelings of joy and relaxation in the parents and encouraged them to interact more profoundly with their infant. The results call for a more extensive powered follow-up study to further investigate CMT’s potential for parental well-being and parent–infant bonding. View Full-Text
Keywords: music therapy; NICU; prematurity; postnatal anxiety; postnatal stress; attachment music therapy; NICU; prematurity; postnatal anxiety; postnatal stress; attachment
►▼ Show Figures 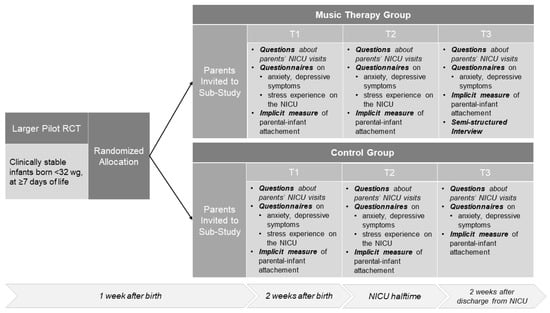