Limited data are available regarding strength and endurance training adaptations to occupational physical performance during deployment. This study assessed acute training-induced changes in neuromuscular (electromyography; EMG) and metabolic (blood lactate, BLa) responses during a high-intensity military simulation test (MST), performed in the beginning (PRE) and at the end (POST) of a six-month crisis-management operation. MST time shortened (145 ± 21 vs. 129 ± 16 s, −10 ± 7%, p < 0.001) during the operation. Normalized muscle activity increased from PRE to POST in the hamstring muscles by 87 ± 146% (116 ± 52 vs. 195 ± 139%EMGMVC, p < 0.001) and in the quadriceps by 54 ± 81% (26 ± 8 vs. 40 ± 20%EMGMVC, p < 0.001). In addition, higher acute BLa values were measured after MST during POST. Changes in BLa and EMG suggested an increased neural input and metabolic rate during POST MST, likely leading to faster performance times at the end of the operation. High EMG values throughout the different phases of MST suggested that despite the anaerobic nature of the test, the soldiers were able to maintain their voluntary muscle activation level until the end of the test. This indicates only limited neural fatigue during the two-minute high-intensity military specific performance. While learning effect may explain some part of the improvement in the MST performance times, combined strength and endurance training three times per week may improve neuromuscular performance in occupationally relevant tasks.
Keywords: readiness; physical fitness; soldier; occupational performance; electromyography readiness; physical fitness; soldier; occupational performance; electromyography

Several duties performed during military operations such as patrolling in combat gear and material handling tasks are physically demanding [1,2]. Furthermore, maintenance of physical performance may be challenged during deployments due to increased environmental and operative demands, mental and physical stress, as well as limited access and time to train [3,4]. In fact, several studies have reported decreases in aerobic fitness after prolonged (>nine months) military deployments [5,6,7,8]. In addition, neuromuscular performance may be attenuated within a few weeks of detraining [9].
Deterioration of physical fitness may have a negative impact on occupational performance and combat readiness during sustained military operations. Loss in physical fitness of an individual would increase the relative physiological demands of performing a task and reduce overall working capacity during prolonged assignments [10], which in many occasions, is the nature of military duties. Thus, while individual modifications to external (e.g., task originated) occupational demands may often not be possible during military operations, one strategy for decreasing relative physical workload includes improvement of physical fitness [11,12].
Changes in physical performance of soldiers can be assessed by traditional fitness tests, but more task specificity may be achieved by using occupationally relevant simulations. A high-intensity military simulation test (MST) lasting on average two minutes was developed for crisis management soldiers to test their physical performance in a possible combat situation during patrolling [13]. In combination with other physical performance measures, this cross-sectional study reported that the power of the lower extremities, endurance performance, muscle mass, and muscular endurance of the upper extremities were relevant fitness predictors, explaining two thirds of the variance in the MST performance time [13]. However, these cross-sectional results do not provide information about training adaptations during deployment and thus, follow-up tests are required for longitudinal assessment. In addition, changes in acute neuromuscular and metabolic variables provide more in-depth knowledge about the mechanisms behind the chronic training adaptations. Regarding to the study of Pihlainen et al. [13], high blood lactate (BLa) and rating of perceived exertion (RPE) levels after MST indicated that the performance induced increased glycolytic metabolism and acute subjective fatigue. It was reported that when oxidative metabolism is not sufficient to provide energy for the required exercise intensity level, increased rates of glycolysis result in enhanced lactic acid production in muscles and accumulation of blood lactate, which in turn may lead to symptoms of fatigue [14].
Nowadays, commercial skin surface electromyography (sEMG) garments can be utilized for the measurement of duration and intensity of dynamic neuromuscular function during occupational settings [15,16,17]. Despite the sEMG technology development, assessment of muscle activity has rarely been utilized in applied military field studies, but more so in standardized laboratory conditions [18,19,20]. For example, Paul et al. [19] observed a 242% increase in muscle activity of the knee extensors in soldiers carrying a 21.4-kg military specific load on a treadmill with a pace of 4 km/h and 25% gradient, when compared to the 0% gradient condition. Thus, the main purpose of the present study was to assess acute training-induced changes in the MST performance, with special focus on muscle activity and metabolic rates, during a six-month military operation.

In conclusion, increased lower extremity muscle activity in the MST performance was observed during the six-month military operation, likely as a result of training-induced increase in physical fitness and motor learning. The assessment of muscle activity provided new insights into the physiology of the MST, revealing high neuromuscular input, which was in line with POST BLa and RPE values. In addition to military research, other physically demanding occupations (e.g., firefighting and law enforcement) could benefit from EMG field measurements in the assessment of muscle group dynamics, as well as limitations and effectiveness or training adaptations of the neuromuscular system [18,39].

The study was conducted according to the guidelines of the Declaration of Helsinki, and approved by the Ethics Board of the Central Finland Health Care District (protocol code KSSHP E1/2013, and 5 April 2013 of approval).

Data sharing is not applicable.

The authors appreciate the financial support of the Centre for Military Medicine, MATINE, the Scientific Advisory Board for Defence and the Defence Support Foundation. The views, opinions, and/or findings contained in this publication are those of the authors and should not be construed as an official position, policy, or decision of the Finnish Defence Forces, unless so designated by other documentation. 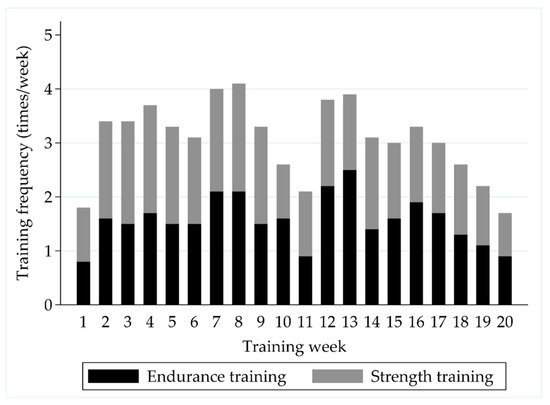 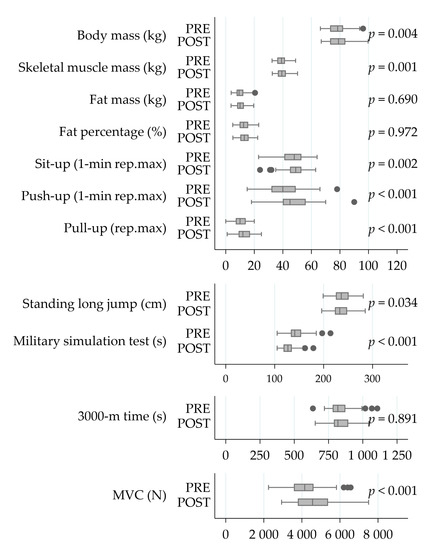 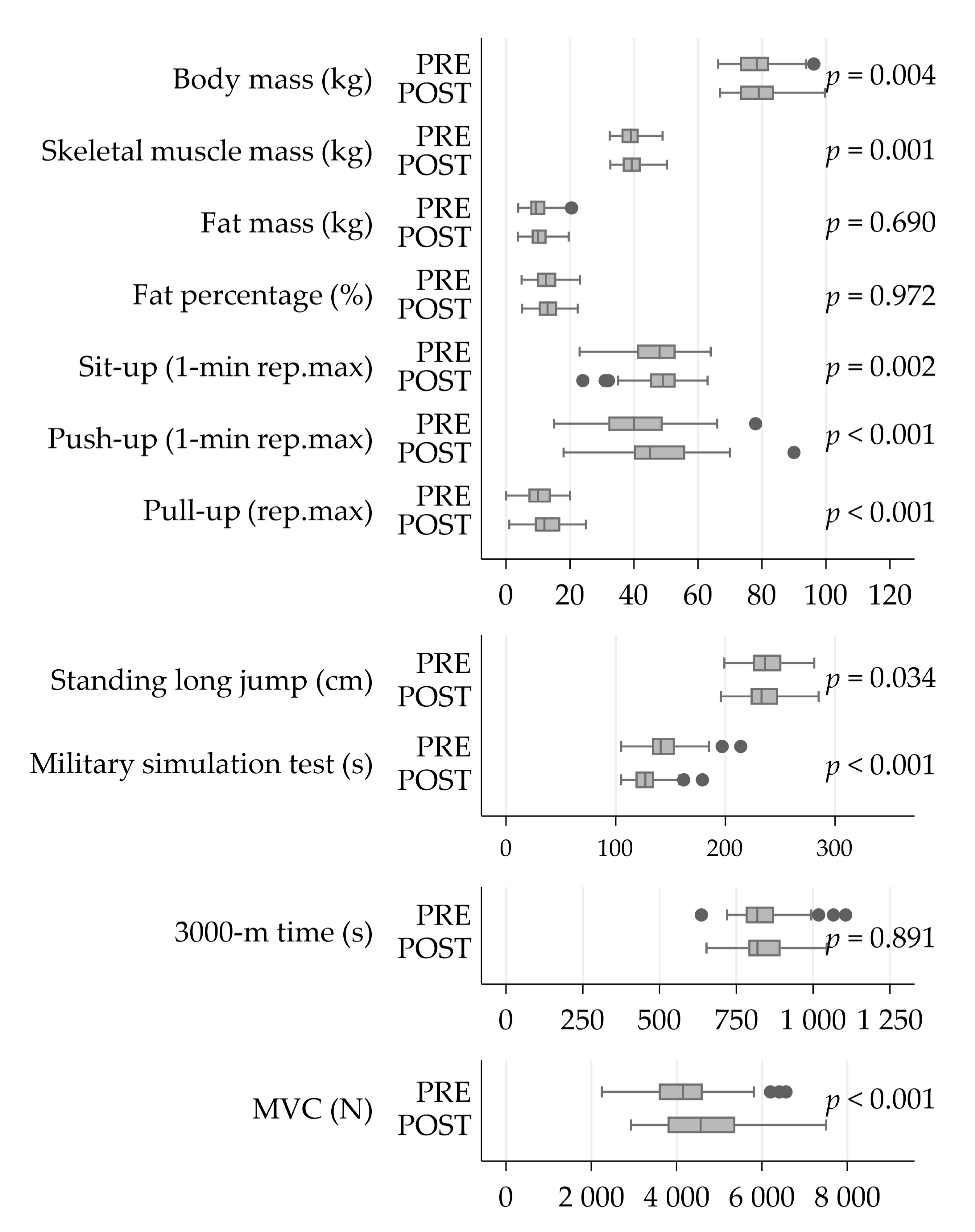 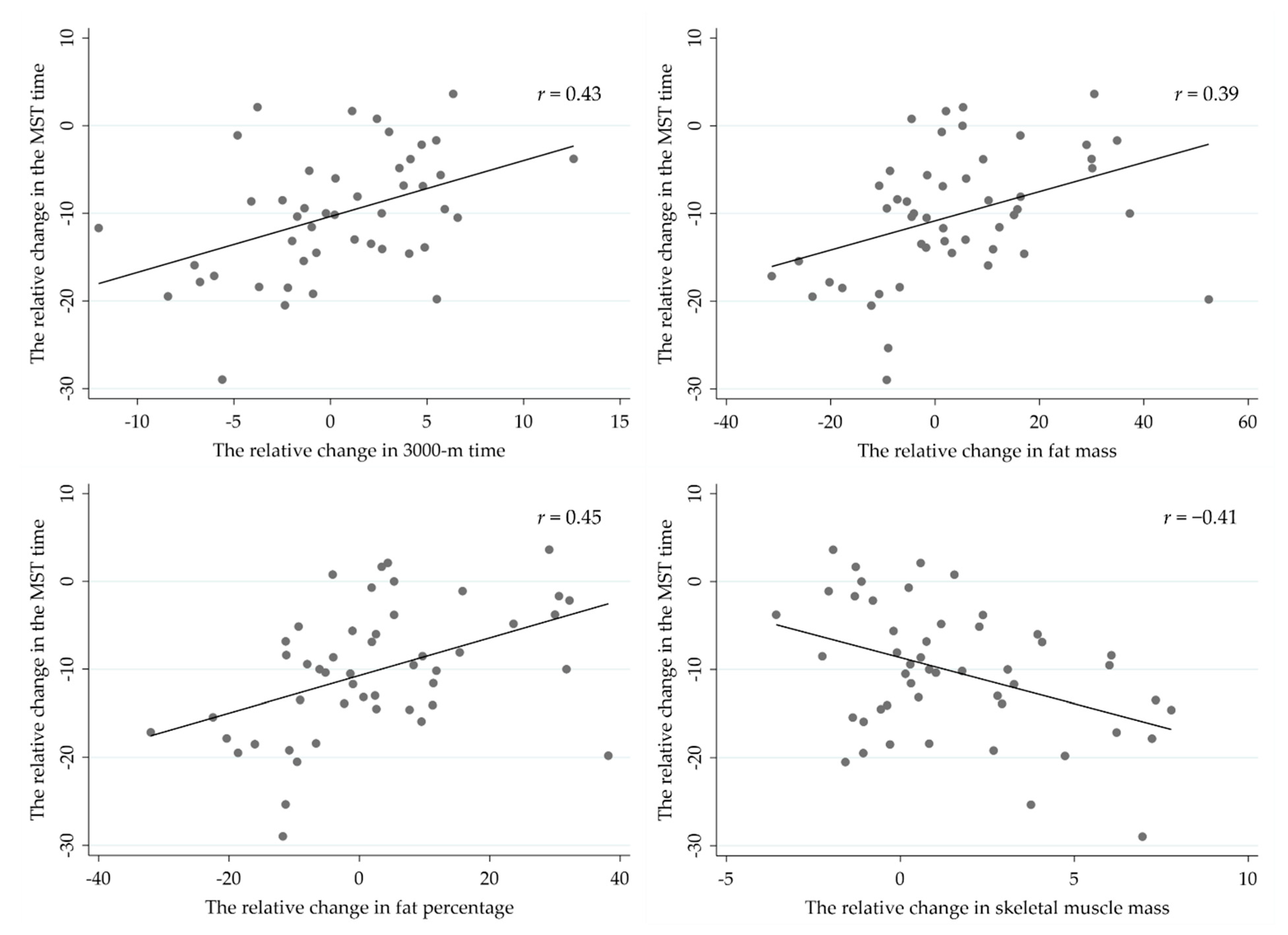