Socioeconomic Inequalities in Child Malnutrition in Bangladesh: Do They Differ by Region?

Racial/ethnic disparities in infant mortality (IM) continue to persist in the United States, with Black/African Americans (AA) being disproportionally affected with a three-fold increase in mortality compared to Whites. Epidemiological data have identified maternal characteristics in IM risk such as preeclampsia, eclampsia, maternal education, smoking, maternal weight, maternal socioeconomic status (SES), and family structure. Understanding the social gradient in health including implicit bias, as inherent in the method of labor and delivery and the racial heterogeneity, may facilitate intervention mapping in narrowing the Black–White IM risk differences. We aimed to assess the temporal/racial trends and the methods of delivery, mainly vaginal vs. cesarean section (C-section) as an exposure function of IM. The United States linked birth/infant death records (2007–2016) were used with a cross-sectional ecological design. The analysis involved chi squared statistic, incidence rate estimation by binomial regression model, and period percent change. Of the 40,445,070 births between 2007 and 2016, cumulative mortality incidence was 249,135 (1.16 per 1000). The IM rate was highest among Black/AA (11.41 per 1000), intermediate among Whites (5.19 per 1000), and lowest among Asian /Pacific Islanders (4.24 per 1000). The cumulative incidence rate difference, comparing vaginal to cesarean procedure was 1.73 per 1000 infants, implying excess IM with C-section. Compared to C-section, there was a 31% decreased risk of IM among mothers with vaginal delivery, rate ratio (RR) = 0.69, 95% confidence interval (CI): 0.64–0.74. Racial disparities were observed in the method of delivery associated with IM. Black/AA mothers with vaginal delivery had a 6% decreased risk of IM compared to C-section, RR = 0.94, 95% CI: 0.92–0.95, while Whites with vaginal delivery had a 38% decrease risk of IM relative to C-section, RR= 0.68, 95% CI: 0.67–0.69, p < 0.001. Infant mortality varied by race, with Black/AA disproportionally affected, which is explained in part by labor and delivery procedures, suggestive of reliable and equitable intrapartum assessment of Black/AA mothers during labor, as well as implicit bias marginalization in the healthcare system. View Full-Text
Keywords: vaginal; cesarean section; African American women; infant mortality; race/ethnicity vaginal; cesarean section; African American women; infant mortality; race/ethnicity
►▼ Show Figures 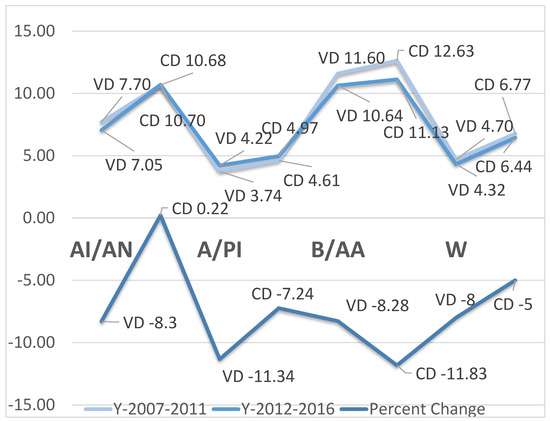