Objective: This study examined the association of several social and environmental factors on the likelihood of reaching centenarian age for older adults in Washington State. Methods: A survival analysis of reaching centenarian age for older adults aged 75 years and above was performed using Washington State mortality data from 2011−2015. Models were adjusted for sex, race, education, marital status, and neighborhood level social and environmental variables at the block group level. Geographic clusters of increased chance of becoming a centenarian were also mapped. Results: In the adjusted model, increased neighborhood walkability, lower education level, higher socioeconomic status, and a higher percent of working age population were positively associated with reaching centenarian age. Being widowed, divorced/separated, or never married were also positively correlated compared to being married. Additionally, being white or female were positively correlated with reaching centenarian status. Discussion: Several social and environmental factors are correlated with becoming a centenarian in Washington State. In this study, we explore findings that are consistent with previous research, as well as some that have not been previously explained. More research is needed to expand upon these findings in this rapidly growing field. View Full-Text
Keywords: centenarian; mortality; aging; Washington State; social determinants centenarian; mortality; aging; Washington State; social determinants
►▼ Show Figures 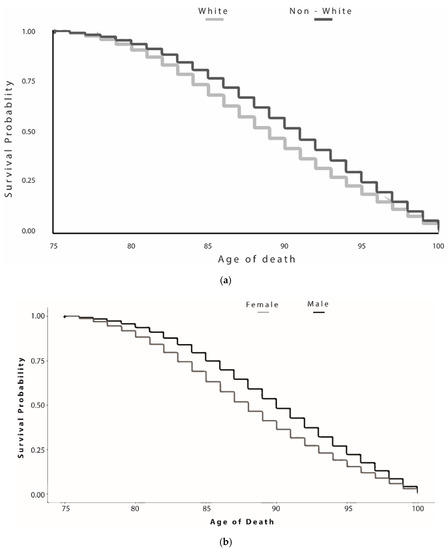