Health Outcomes of an Integrated Behaviour-Centred Water, Sanitation, Hygiene and Food Safety Intervention–A Randomised before and after Trial
Previous Article in Journal

The Influence of Negative Life Events on Suicidal Ideation in College Students: The Role of Rumination

The Role of Microbiome, Dietary Supplements, and Probiotics in Autism Spectrum Disorder

Autism spectrum disorder (ASD) is a serious neurodevelopmental disorder characterized by the impairment of the cognitive function of a child. Studies suggested that the intestinal microbiota has a critical role in the function and regulation of the central nervous system, neuroimmune system and neuroendocrine system. Any adverse changes in the gut–brain axis may cause serious disease. Food preferences and dietary patterns are considered as key in influencing the factors of ASD development. Several recent reviews narrated the importance of dietary composition on controlling or reducing the ASD symptoms. It has been known that the consumption of probiotics confers several health benefits by positive amendment of gut microbiota. The influence of probiotic intervention in children with ASD has also been reported and it has been considered as an alternative and complementary therapeutic supplement for ASD. The present manuscript discusses the role of microbiota and diet in the development of ASD. It also summarizes the recent updates on the influence of dietary supplements and the beneficial effect of probiotics on ASD symptoms. An in-depth literature survey suggested that the maternal diet and lifestyle are greatly associated with the development of ASD and other neurodevelopmental disorders. Mounting evidences have confirmed the alteration in the gut microbial composition in children suffering from ASD. However, the unique profile of microbiome has not yet been fully characterized due to the heterogeneity of patients. The supplementation of probiotics amended the symptoms associated with ASD but the results are inconclusive. The current study recommends further detailed research considering the role of microbiome, diet and probiotics in the development and control of ASD. View Full-Text
Keywords: autism spectrum disorder; probiotics; diet; microbiome; cognition autism spectrum disorder; probiotics; diet; microbiome; cognition
►▼ Show Figures 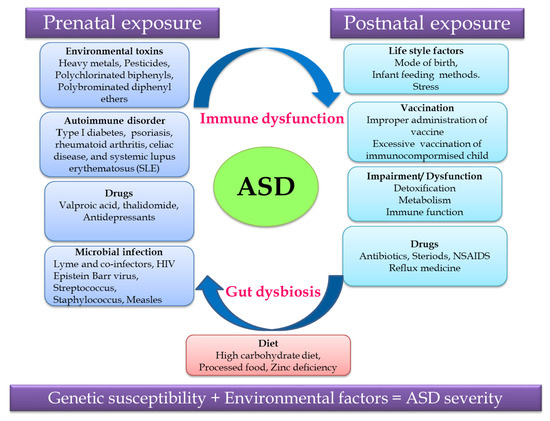