What Is the Co-Creation of New Knowledge? A Content Analysis and Proposed Definition for Health Interventions
Previous Article in Journal

Background: As scientific findings of air pollution and subsequent health effects have been accumulating, public interest has also been growing. Accordingly, web visualization is suggested as an effective tool to facilitate public understanding in scientific evidence and to promote communication between the public and academia. We aimed to introduce an example of easy and effective web-based visualization of research findings, relying on predicted concentrations of particulate matter ≤ 10 µg/m3 (PM10) and nitrogen dioxide (NO2) obtained from our previous study in South Korea and Tableau software. Our visualization focuses on nationwide spatial patterns and temporal trends over 14 years, which would not have been accessible without our research results. Methods: Using predicted annual average concentrations of PM10 and NO2 across approximately 250 districts and maps of administrative divisions in South Korea during 2001–2014, we demonstrate data preprocessing and design procedures in the Tableau dashboard, comprising maps, time-series plots, and bar charts. Results: Our visualization allows one to identify high concentration areas, a long-term temporal trend, and the contrast between two pollutants. The application of easy tools for user-interactive options in Tableau suggests possible easy access to the scientific knowledge of non-experts. Conclusion: Our example contributes to future studies that develop the visualization of research findings in further intuitive designs. View Full-Text
Keywords: air pollution; nitrogen dioxide; particulate matter; scientific findings; web-based visualization air pollution; nitrogen dioxide; particulate matter; scientific findings; web-based visualization
►▼ Show Figures 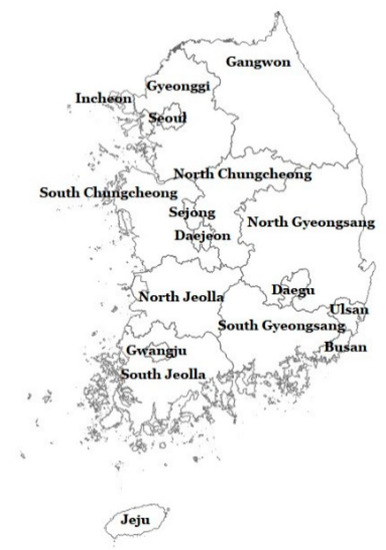