Why Do Women Not Use the Bathroom? Women’s Attitudes and Beliefs on Using Public Restrooms
Next Article in Special Issue

Is the Association between Green Tea Consumption and the Number of Remaining Teeth Affected by Social Networks?: A Cross-Sectional Study from the Japan Gerontological Evaluation Study Project

Consumption of green tea without sugar, as well as social networks, are associated with a lower risk of tooth loss. There is a possibility of confounding both factors because tea is often drunk with friends. Therefore, the present study aimed to examine whether green tea consumption is beneficially associated with the number of remaining teeth, while considering social networks. This cross-sectional study was based on the Japan Gerontological Evaluation Study (JAGES) in 2016. Self-administered questionnaires containing questions about green tea consumption were mailed to 34,567 community-dwelling residents aged ≥ 65 years. We used the number of remaining teeth as a dependent variable, and green tea consumption and the number of friends met over the past month (social network size) as independent variables. Linear regression models with multiple imputation were used. A total of 24,147 people responded (response rate = 69.9%), and 22,278 valid data were included into our analysis. Participants’ mean age was 74.2 years (standard deviation = 6.3), and 45.9% were men. Among the participants, 52.2% had ≥ 20 teeth, 34.2% drank 2–3 cups of green tea per day, and 32.6% met ≥ 10 people over the past month. After adjusting for all potential confounders, both higher green tea consumption and a larger social network size were associated with more remaining teeth (both p for trend < 0.001). The association of green tea was greater among those with smaller social networks (p for interaction < 0.05). The protective association of green tea was remarkable among people with smaller social networks. View Full-Text
Keywords: green tea; tooth loss; oral health; social network; friends green tea; tooth loss; oral health; social network; friends
►▼ Show Figures 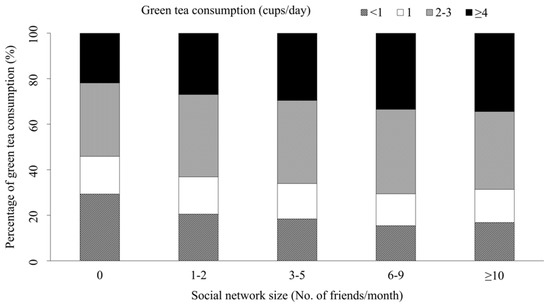