Geneva Health Forum: The Forum of Innovative Practices in Global Health
Next Article in Special Issue

Parental Monitoring and Adolescent Problematic Mobile Phone Use: The Mediating Role of Escape Motivation and the Moderating Role of Shyness

Internet Gaming Disorder Clustering Based on Personality Traits in Adolescents, and Its Relation with Comorbid Psychological Symptoms

In recent years, the evidence regarding Internet Gaming Disorder (IGD) suggests that some personality traits are important risk factors for developing this problem. The heterogeneity involved in problematic online gaming and differences found in the literature regarding the comorbid psychopathology associated with the problem could be explained through different types of gamers. Clustering analysis can allow organization of a collection of personality traits into clusters based on similarity. The objectives of this study were: (1) to obtain an empirical classification of IGD patients according to personality variables and (2) to describe the resultant groups in terms of clinical and sociodemographic variables. The sample included 66 IGD adolescent patients who were consecutive referrals at a mental health center in Barcelona, Spain. A Gaussian mixture model cluster analysis was used in order to classify the subjects based on their personality. Two clusters based on personality traits were detected: type I “higher comorbid symptoms” (n = 24), and type II “lower comorbid symptoms” (n = 42). The type I included higher scores in introversive, inhibited, doleful, unruly, forceful, oppositional, self-demeaning and borderline tendency traits, and lower scores in histrionic, egotistic and conforming traits. The type I obtained higher scores on all the Symptom Check List-90 items-Revised, all the State-Trait Anxiety Index scales, and on the DSM-5 IGD criteria. Differences in personality can be useful in determining clusters with different types of dysfunctionality. View Full-Text
Keywords: internet gaming disorder; cluster analysis; video game; video game addiction; personality; comorbidity internet gaming disorder; cluster analysis; video game; video game addiction; personality; comorbidity
►▼ Show Figures 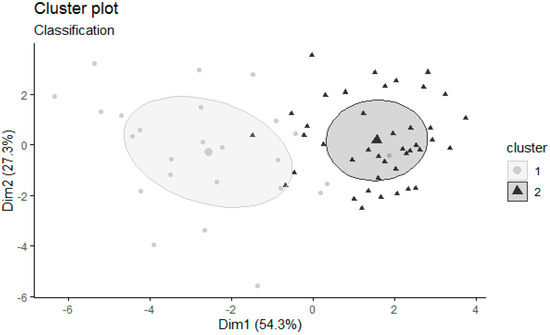