Providing social security to the population in need has become a major expenditure for many governments. Reducing the number of dependents in the social security system and maintaining a dynamic economically active population is a high priority concern for policymakers. A good understanding of the dynamics of the social security system—specifically, who enters and who exits the system—would be helpful for formulating effective interventions. Here, we made use of the data of Hong Kong’s Comprehensive Social Security Assistance (CSSA), which is currently a basic welfare scheme in Hong Kong that provides supplementary payments to households that cannot support themselves financially. We proposed a stochastic model to examine the in- and out- movement in the CSSA scheme and conducted elasticity analyses. The elasticity analyses allowed us to identify the potential target groups of people that would lead to the largest reduction in the number of the CSSA recipients in the system. This analytical method can also reveal whether policies would be more effective in preventing people from entering the CSSA system or helping them leave the CSSA scheme. Our analyses suggest that targeting those aged 30–49 with children would have the largest impact. Additionally, we found that policies that aim to prevent this group from entering the CSSA system would be more effective in reducing the number of CSSA recipients compared with policies that aim to help them exit. In contrast, for the younger age group of 10–29, policies that help them leave CSSA would be more effective than policies that prevent them from entering CSSA. Providing employment for those unemployed in this younger group would be more effective. The results indicate that by tailoring measures to specific subgroups, the overall number of CSSA recipients would be reduced, thereby improving the efficiency of Hong Kong’s social security system, which has accounted for more than 16.5% of Hong Kong government expenditure in 2018, amounting to more than HKD 92 billion. View Full-Text
Keywords: poverty rate; social security system; youth mobility; effectiveness poverty rate; social security system; youth mobility; effectiveness
►▼ Show Figures 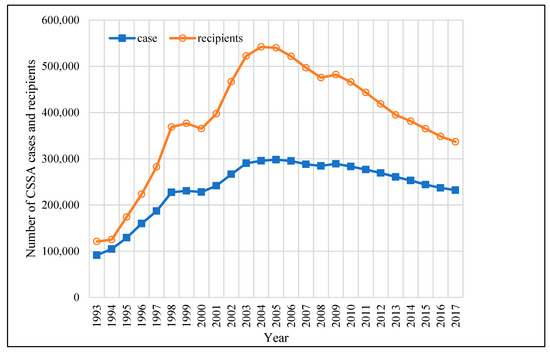