Social Support and Subclinical Coronary Artery Disease in Middle-Aged Men and Women: Findings from the Pilot of Swedish CArdioPulmonary bioImage Study
Next Article in Special Issue

The data were collected from a school-based adolescent health survey in Guangdong Province in 2018. Participants were selected through a multistage, stratified cluster-randomized sampling method. In stage 1, the entire province was divided into three economic stratifications by per capita GDP (high, medium, and low) and then two cities were randomly selected from each stratification. In stage 2, schools in each selected city were divided into three categories: junior high schools, senior high schools, and vocational high schools. We randomly selected six junior high schools, four senior high schools, and two vocational high schools based on the overall proportions of the three types of schools. In stage 3, two classes were randomly selected from each grade of the selected schools and all available students in the selected classes were invited to voluntarily participate in this study. Among the 21,982 students who were invited to participate, 20,722 students completed the questionnaires and qualified for our study, resulting in a response rate of 94.3%.
The anonymous self-report questionnaires were completed during one class period (45 min). Research assistants administered the survey in the classroom without the presence of teachers to avoid any potential information bias. The study protocol was approved by the Institutional Review Board of Sun Yat-Sen University, School of Public Health. Written informed consent was obtained from each student and one of his or her parents prior to the survey.

Bullying victimization was measured by seven victimization items adapted from the Chinese version of the Olweus Bully/Victim Questionnaire (OBVQ) [28], which has been applied among Chinese adolescents in previous studies with good internal consistency and test-retest reliability [29,30]. For each item, students were asked how often they were bullied in a specific way during the current semester. The seven items were as follows: item 1—“I was called mean names, was made fun of, or teased in a hurtful way”; item 2—“Other students left me out of things on purpose, excluded me from their group of friends, or completely ignored me”; item 3—“I was hit, kicked, pushed, shoved around, or threatened”; item 4—“Other students told lies or spread false rumors about me and tried to make others dislike me”; item 5—“I had money or other things taken away from me or damaged”; item 6—“I was bullied with mean names or comments about my accent”; and item 7—“I experienced cyberbullying (being bullied via text message, E-mail, a social network or a website)”. Verbal victimization was measured by item 1 and item 6, physical victimization was measured by item 3 and item 5, relational victimization was measured by item 2 and item 4, and cyber victimization was measured by item 7. The response options were “never”, “only once or twice”, “two or three times a month”, “about once a week”, and “several times a week”. Each item was converted to a dichotomous variable (0 = uninvolved, 1 = involved) based on the cutoff point of the frequency of “two or three times a month” [28] and was included in the latent class models as a categorical manifest indicator.

Students’ anxiety symptoms were assessed using the Chinese version of the 7-item Generalized Anxiety Disorder scale (GAD-7) [31]. The GAD-7 reflects how often the subjects have suffered from the seven core symptoms of generalized anxiety disorder over the past two weeks. The response options include “not at all”, “several days”, “more than half the days”, and “nearly every day”, which are scored as 0, 1, 2, and 3, respectively. GAD-7 scores range from 0 to 21 with higher scores representing more severe anxiety symptoms.

The Chinese version of the Center for Epidemiology Scale for Depression (CES-D) [32] was utilized to evaluate the level of the students’ depressive symptoms. The respondents were asked to rate the frequency of occurrence of 16 negative items and four positive items over the past week by choosing one of the following response options: “rarely or none of the time (less than 1 day)”, “some or a little of the time (1–2 days)”, “occasionally or a moderate amount of the time (3–4 days)”, or “most or all of the time (5–7 days)”. The total scores range from 0 to 60 and higher scores indicate more severe depressive symptomatology.

LCA was employed to identify the underlying homogenous subgroups of students based on their responses to the seven bullying victimization items and to examine the relationships between bullying victimization class membership and mental health outcomes. To explore whether there were gender differences in patterns of bullying victimization, LCA was performed separately by gender. The most appropriate number of latent classes was determined through comparisons of several model fit indices, including the Akaike information criterion (AIC), Bayesian information criterion (BIC), sample size adjusted Bayesian information criterion (SSABIC), entropy, Lo-Mendell-Rubin adjusted likelihood ratio test (LMR), and bootstrapped likelihood ratio test (BLRT) [33]. Lower AIC, BIC, and SSABIC values suggest better model fit. The entropy value of each model ranges from 0 to 1, with a higher value indicating better classification accuracy. The LMR and BLRT were used to compare the k-class model with the (k-1)-class model, and non-significant values for the k-class model indicate that the model with (k-1) classes should be more parsimonious. After the number and nature of victimization classes were determined, individuals were assigned to a specific class according to their highest posterior probabilities. Next, we tested the association between class membership and levels of mental health outcomes. For continuous outcome variables, including the GAD-7 scores and CES-D scores, the mean differences across classes were tested using the modified BCH method [34]. For binary outcome variables, including NSSI, suicidal ideation and suicide attempts, the probabilities were compared across classes using Lanza’s method [35]. Data analyses were conducted using Mplus version 7.4 (Muthén and Muthén).

The characteristics of the sample are shown in Table 1. Of the total sample included in the analyses, 50.3% were males and 49.7% were females. The mean age of the participants was 15.0 years old, with an SD of 1.79. The involvement rates for the seven victimization items ranged from 1.1% to 11.2%, and the two most commonly endorsed items were a verbal victimization item (item 1) and a relational victimization item (item 4). The mean (SD) GAD-7 scores and CES-D scores were 4.15 (4.4) and 14.36 (10.2), respectively. A total of 13.9%, 17.8% and 3.6% of the students reported histories of NSSI, suicidal ideation, and suicide attempts during the past 12 months, respectively. Significant gender differences were found for all variables (p < 0.05). Boys had a higher involvement rate for each victimization item, whereas mental health problems were more prevalent among girls.

The authors gratefully acknowledge the contribution of local health professionals, the Department of Education, and the participating schools. 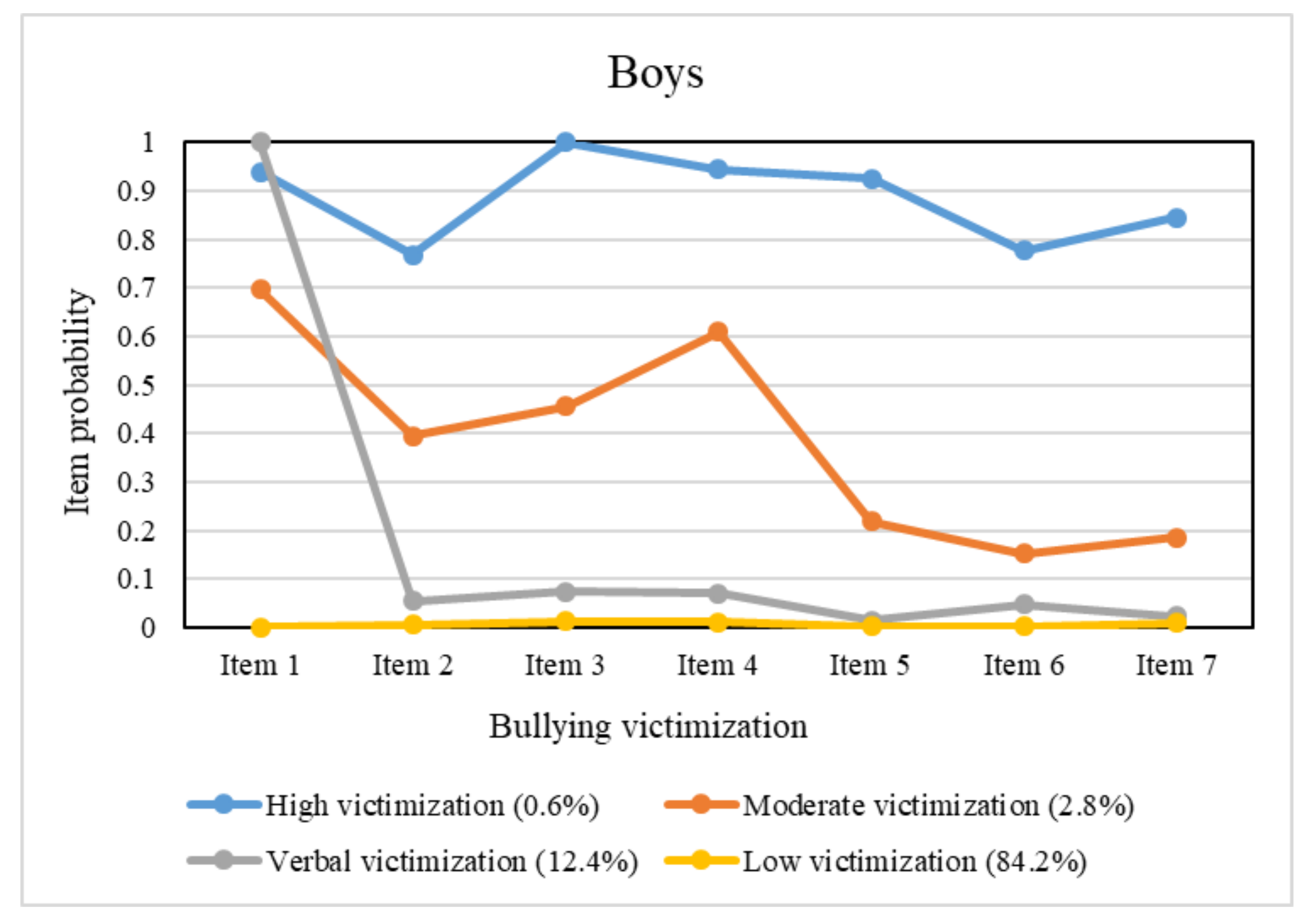