Problematic Smartphone Use and Mental Health in Chinese Adults: A Population-Based Study
Previous Article in Journal

Occurrence and Distribution of Uranium in a Hydrological Cycle around a Uranium Mill Tailings Pond, Southern China
Previous Article in Special Issue

The Assessment of Problematic Internet Pornography Use: A Comparison of Three Scales with Mixed Methods

Problematic Internet Use, Non-Medical Use of Prescription Drugs, and Depressive Symptoms among Adolescents: A Large-Scale Study in China

This study adopted the data from the 2017 National School-based Chinese Adolescents Health Survey (SCAHS), which is an ongoing study about the health risk behaviors and mental health problems among Chinese adolescents (7th–12th grade) conducted by our group. SCAHS performed a series of large-scale cross-sectional surveys every two years since 2007. The 2017 SCAHS utilized a multi-stage stratified cluster random sampling method to recruit a representative sample of adolescents in Guangdong province, and the procedures for data collection have been described in detail in previous publications [21]. Briefly, Guangdong province was firstly categorized into three stratifications according to geographic locations (Yue Dong, Yue Xi, Yue Bei, and Pearl River Delta) and gross domestic product (GDP) per capita (high-level, middle-level, and low-level). Then, we randomly selected two representative cities from each stratification. Considering adolescence is often described as occurring between 13 and 18 years of age (roughly the period of high school for much of the world) [22], in the present study, four vocational high schools and four general high schools were selected from each chosen city. Finally, two classes were randomly selected from each grade within the chosen schools. All available students were invited to participate in this study voluntarily, and 24,345 students’ questionnaires were completed and qualified for analyses, resulting in a response rate of 92.1%. The anonymity of the questionnaires was guaranteed to elevate the validity of self-reports of stigmatized behaviors [23], and our research assistants administered these questionnaires during a regular class period without the presence of teachers (to avoid any potential information bias). Of the total sample, 51.5% (12,526) were boys, and the mean age of the students was 15.2 ± 1.8 years. The study procedures were carried out in accordance with the Declaration of Helsinki. The School of Public Health Institutional Review Board of the Sun Yat-sen University approved the study (the ethic code: L201720). All participants were informed about the study, and all provided written informed consents. If the participant was under 18 years of age, a written informed consent letter was obtained from one of the student’s parents (or legal guardian).

Depressive symptoms were estimated by the Center for Epidemiologic Studies Depression (CES-D) Scale proposed by Radloff (1977), which has been validated and widely used among Chinese adolescents with satisfactory psychometric properties [24], and the Cronbach’s alpha for this CES-D scale was 0.88 in the present study (the Cronbach’s alpha ranging from 0.85 to 0.90 in Radloff’s study). The total CES-D score ranges from 0 to 60, where higher scores indicate more significant depressive symptoms [25]. A cutoff score of 28 points was utilized to identify students at risk for clinical depression, also calling having depressive symptoms. This cutoff score has been used in previous studies in Chinese adolescents [26,27].
PIU was measured by Young’s Internet Addiction Test (IAT) proposed by Young (1998), which has been validated and utilized among Chinese adolescents with satisfactory psychometric properties [28,29], and the Cronbach’s alpha for IAT was 0.91 in this study. The IAT includes 20 items rated on a five-point Likert scale (from 1 = not at all to 5 = always) [30], where the total IAT score ranges from 20 to 100 and a higher score representing a greater level of inclination to PIU.
In the present study, NMUPD consists of non-medical use of opioids and sedatives. This list of opioids and sedatives was developed according to the report of the Guangdong Food and Drug Administration, with a focus on the prescription medications that have been widely used by adolescent drug abusers in rehabilitation centers of China. Opioids consist of compounded cough syrup with codeine (codeine), compounded licorice tablets (opium), tramadol hydrochloride, and diphenoxylate. Sedatives included diazepam or triazolam (benzodiazepines), compounded aminopyrine phenacetine tablets (barbiturates), and scopolamine hydrobromide tablets (barbiturates). Non-medical use of opioids or sedatives was measured by asking students how many times have you used the prescription medications as mentioned above for a non-medical purpose in the past year, and response options included “never”, “once or twice”, and “at least 3 times”. Students who selected “never” were considered as abstainers, those who answered “once or twice” were thought as experimenters, and those who selected “at least three times” were treated as frequent users [30].
Information on sociodemographic variables were also collected, including gender (1 = boy, 2 = girl), age, living arrangement (responses were coded as “living in a two-parent family” = 1, “living in a single-parent family” = 2, and “living with others” = 3), household socioeconomic status (HSS, available responses were “above average” = 1, “average” = 2, and “below average” = 3), academic performance (responses were also coded as “above average” = 1, “average” = 2, and “below average” = 3). Family relationships, classmate relations, and relationships with teachers were assessed by asking how students perceived their relationships with family members, classmates, and teachers (available responses included “good” = 1, “average” = 2, and “poor” = 3).

First, descriptive analyses were used to describe sample characteristics, and the t-tests and one-way ANOVA tests were performed to compare the differences in the CES-D scores. Descriptive analyses stratified by depressive symptoms were also conducted, and the chi-square tests or t-tests were used to describe the distribution of depressive symptoms in categorical or continuous variables. Second, considering this study used a multi-stage sampling design in which students were clustered into classes, generalized linear mixed models were fitted in which classes were treated as groups, and unstandardized β coefficients were reported. Univariable generalized linear mixed models were first conducted to estimate the potential association of PIU or NMUPD with depressive symptoms. Multivariable generalized linear mixed models, in which variables that were significant at the 0.10 level in the univariate analyses or widely reported in the literature were simultaneously incorporated, were performed to test the independent association of PIU or NMUPD with depressive symptoms. Third, multiplicative interaction items were tested by entering a cross-product term for opioid misuse or sedative misuse and PIU along with the main effect terms for each to the multivariable generalized linear mixed models, and p-values for the multiplicative interaction were calculated. Fourth, path models utilizing the maximum likelihood approach were conducted to assess the mediating effects of opioid or sedative misuse on the association between PIU and depressive symptoms. We first ordered the variables as follows: PIU—opioid or sedative misuse—depressive symptoms, and then an alternative model with a different order of the variables were assessed: depressive symptoms—opioid or sedative misuse—PIU. Due to the variables of the CES-D and IAT scores being continuous variables, and the measures of opioid and sedative misuse were categorized, standardized probit coefficients, standardized total effects, and standardized indirect effects were reported, with the bias-corrected 95% confidence intervals (CI) estimated using 1000 bootstrap samples. Path model fit indices were also reported, including comparative fit index (CFI; CFI > 0.90 indicating a good fit), root mean square error of approximation (RMSEA, RMSEA < 0.08 indicating an acceptable fit), and standardized root mean square residual (SRMR; SRMR < 0.08 indicating a good fit) [31,32]. All statistical analyses were conducted using SAS 9.2 (SAS Institute, Inc., Cary, NC, USA) and Mplus version 7.0 (Muthén and Muthén). The percentage of missing data of all relevant variables was less than 0.6, and observations with missing data were eliminated in the generalized linear mixed models and path models. All statistical tests were two-sided, and p-values less than 0.05 were considered statistically significant.

We would like to express our special gratitude and thanks to all the participating schools and students. 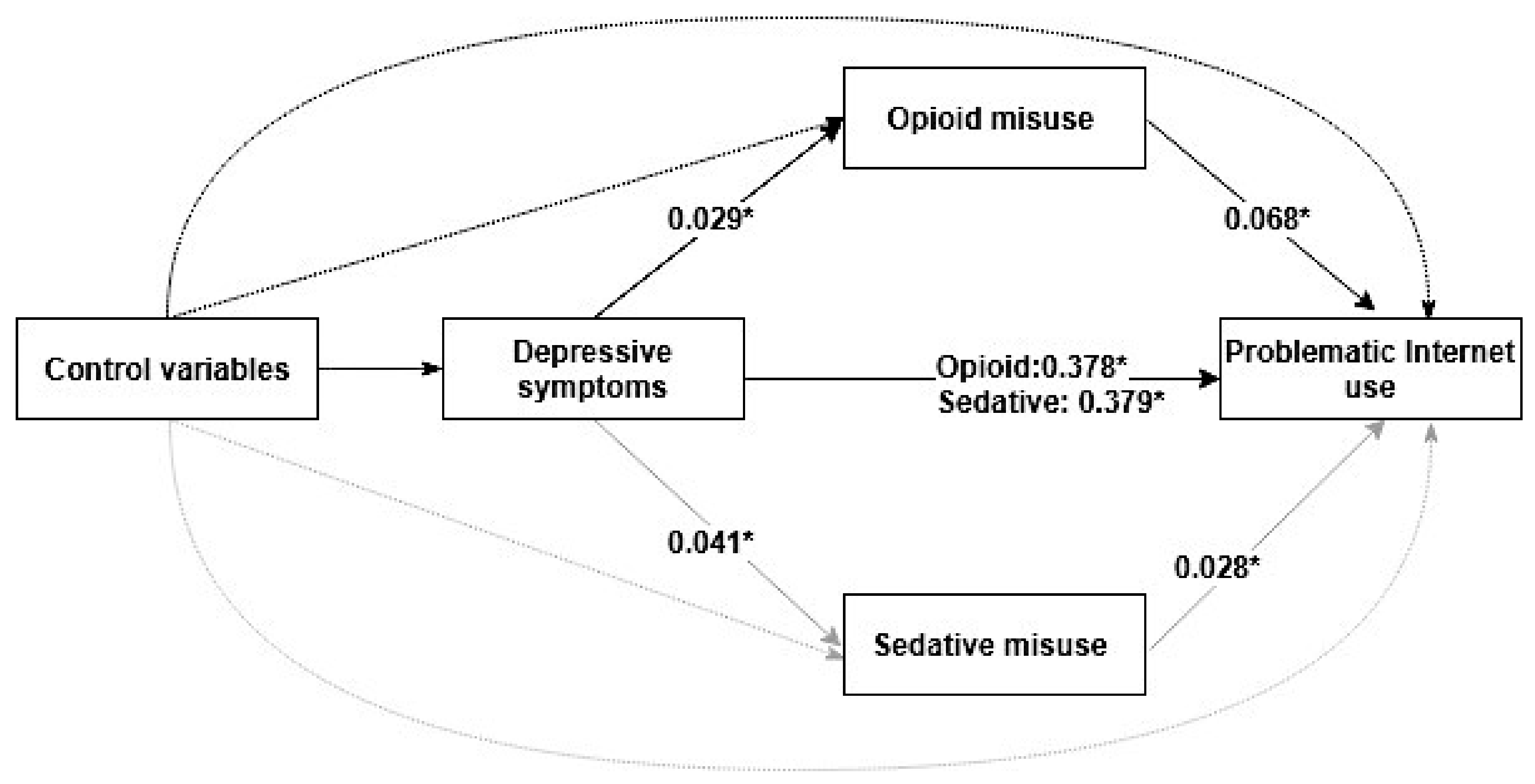