Sociodemographic and Built Environment Associates of Travel to School by Car among New Zealand Adolescents: Meta-Analysis
Next Article in Special Issue

New Insights into Mechanisms of Endocrine-Disrupting Chemicals in Thyroid Diseases: The Epigenetic Way

Is the Increasing Incidence of Thyroid Cancer in the Nordic Countries Caused by Use of Mobile Phones?

One established risk factor for thyroid cancer, especially of the papillary type, is ionizing radiation [1]. The first reports of an increased risk were published in the late 1940s and early 1950s [2,3]. Since then, studies have associated thyroid cancer with diagnostic x-ray investigation [2], external radiotherapy [4], and nuclear fallout after the use of A-bombs in Hiroshima and Nagasaki [5] as well as after the Chernobyl and Fukushima disasters [6]. In Belarus, fallout of radioiodine after the Chernobyl accident has been associated with increased incidence of thyroid cancer in children and adolescents [7]. No clear excess to thyroid cancer related to caesium-137 deposition was found in Sweden [8].
Thyroid cancer is more common in women than in men. Hormonal and reproductive factors may explain that difference [9,10].
During the last two decades, a striking increase in the incidence has been reported in the Nordic countries [11]. Use of computed tomography (CT) and positron emission tomography–computed tomography (PET-CT) for diagnostic procedures may have contributed to the increased incidence, but does not seem to explain the whole increase [12,13].
The thyroid is exposed to radiofrequency (RF) radiation during use of mobile and cordless (DECT) phones [14]. This is especially the situation for smartphones that have been increasingly used since the early 2000s. In our previous study, we postulated that exposure to RF-radiation might be a causative factor for the increasing incidence [11].
A case-control study on mobile phone use suggested an increased risk for thyroid cancer [15]. The same material was used to study genotype–environment interaction between single nucleotide polymorphism (SNPs) and mobile phone use [16]. The study showed that mobile phone use increased the risk for thyroid cancer when genetic variants were present within some genes. It was concluded that pathways related to DNA repair may be involved in the increased risk for thyroid cancer associated with mobile phone use. The increased risk was seen regardless of tumor size, ≤10 mm versus >10 mm, or latency, ≤13 years versus >13 years [16].
The U.S. National Toxicology Program (NTP) results on the toxicology and carcinogenicity of RF radiation in rats and mice showed no increased thyroid cancer incidence in mice [17]. A statistically significant increased incidence of C cell hyperplasia was found in the two years of GSM exposed groups (1.5, 3, and 6 W/kg, respectively) of female rats [18]. In males, a statistically non-significant increased incidence was observed in the 1.5 W/kg exposure group. C cell hyperplasia is a precursor to familial medullary thyroid cancer in humans and may also be a precursor to other types of thyroid cancer [19].
We studied the incidence of thyroid cancer using the Swedish Cancer Register and NORDCAN for the Nordic countries. Our previous published results [11] were thus updated. Since no personal identification was used, no ethical permission was needed.

The National Board of Health and Welfare administers the Swedish Cancer Register. It has yearly updates and was started in 1958. The tumor diagnosis is based on clinical examination, histology/cytology, surgery, and/or autopsy. Additionally, laboratory investigations, CT, and MRI are used for diagnosis.
The ICD-7 code 194 is used in the Swedish Cancer Register for thyroid cancer. We studied the aged-adjusted incidence per 100,000 person years according to the world population for the time period 1970–2017. The database was updated until 2018, but the last year was excluded due to a delay in the reporting of cases leading to an underestimation of number of tumors for that year according to the Swedish Cancer Register (note in the online database). The data are available online (https://sdb.socialstyrelsen.se/if_can/val.aspx).
NORDCAN was used for all Nordic countries (Sweden, Denmark, Finland, Norway, and Iceland) to study thyroid cancer incidence (ICD-10 code C73) for the time period 1970–2016 (latest update). Thereby age-adjustment was made according to the world population. The data are available online (http://www-dep.iarc.fr/NORDCAN/english/frame.asp).

Trends in age-standardized incidence of thyroid cancer by fitting a model of 0–5 joinpoints settings in default mode was analyzed using the
National Cancer Institute (NCI) Joinpoint Regression Analysis program, version 4.8.0.1 [20]. Annual percentage changes (APC) and 95% confidence intervals (CI) were calculated for each linear segment when joinpoints were detected. For the whole time period, average annual percentage changes (AAPC) were calculated using the average of the APCs weighted by the length of the segment. To calculate APC and AAPC, the data were log-transformed prior to analysis. Thus, it was not possible to perform joinpoint regression analysis when there were years with no cases during the time period.

The main result in this study was increasing thyroid cancer incidence in Sweden during the study period 1970–2017, especially during the more recent years in both men and women. The increase was even higher than during 1970–2013, as presented in our previous publication [11]. Thus, AAPC in women was now +2.13% compared with +1.19% during our previous study period. The corresponding results in men were +1.49% and +0.77%, respectively. In men, the AAPC increase was now statistically significant.
Increasing statistically significant AAPC was found in all age groups for both genders except those aged 80+ years and in men 0–19 years. These results were based on lower numbers and are similar to those in our previous publication [11]. In both men and women, increasing APC was found from early 2000. Thus, since 2002, thyroid cancer incidence increased in women yearly more than +7% in the age groups 20–39 and 40–59 years. From 2003, APC increased with +6% in the age group 60–79 years. It is noteworthy that for all women, the yearly increase was almost +10% during 2010–2017. A similar pattern was found in men with APC about +5% to almost +8% in the three age groups 20–79 years since the beginning of the 21st century.
According to NORDCAN, the thyroid cancer incidences increased statistically significantly from 2006 in women and from 2005 in men based on a fairly large number of cancer cases. The increase was comparable in both women and men during these time periods at +5.83% versus +5.48%.
Since this is a register-based study, the results must be interpreted with caution. The results were given for age groups and were gender-specific. However, these results do definitely indicate an etiologic impact of an exogenous cancer-causing factor with increasing exposure over time. In our previous publication [11], we made a comprehensive discussion of different risk factors. One risk factor might be pollution [21]. Another good candidate is no doubt the use of wireless phones, especially the handheld smartphone that due to the antenna position gives RF exposure to the thyroid gland. This organ is one of the highest exposed aside from the brain during the use of smartphones [14]. These phones have been increasingly common since the early 21st century and are now the only types that are marketed. The first generations of mobile phones were introduced in the 1980s as well as the cordless desktop phone (DECT). Additionally, these handheld phones give off RF radiation to the head and neck region.
A fairly short latency period has been found for ionizing radiation induced thyroid cancer with increasing risk beginning 5–10 years after radiation [22]. Thus, the sharp current increase in thyroid cancer incidence may be radiation induced, most likely RF radiation from the handheld phone. It is noteworthy that Luo et al. [16] also found increased risk in the shortest latency period of ≤13 years.
Increasing thyroid cancer incidence has been seen worldwide during the last 20 years, and is expected to be the fourth most common cancer by 2030 [23]. The rising trend has been reported in different continents with different health systems and ethnicities [24].
So called overdiagnosis has been suggested to explain the increasing thyroid cancer incidence [12] due to better access to health care and screening. However, screening for thyroid cancer is not performed in the Nordic countries and there are no social or demographic differences for health access. Diagnostic patterns might be a contributing factor but do not explain the increasing incidence, especially during recent years [25]. This is supported by the recent results also showing increased risk from RF radiation for tumors ≤10 mm [16]. Interestingly, according to the Swedish Cancer Register, there is a similar incidence increase during 2005–2018 for tumors ≤4 cm (T1-T2) as for tumors >4 cm (T3-T4), or with invasive growth into surrounding tissue. The percentage between these groups was about the same over the years, indicating that the increasing incidence is not due to overdiagnosis [26].
Ionizing radiation is an established risk factor. Increasing use of x-ray investigations for diagnostic procedures may be contributing to the increased incidence, especially for the radio-sensitive papillary type [27]. Chest CT and whole-body trauma CT are increasingly used, but does not explain the pattern of increasing incidence of thyroid cancer; for discussion, see Carlberg et al. [11]. Diet has been suggested to be of etiologic importance for thyroid cancer. In a prospective study, intake of iodine-rich foods and goitrogens were indicated to influence the risk [28]. However, there have been no known sudden changes of the food habits in the Nordic countries that can explain our findings.

Thyroid cancer incidence has been steeply increasing in Sweden and all Nordic countries during the 21st century. Use of the handheld mobile phone is increasing, in particular, the smartphone gives high RF radiation exposure to the thyroid gland. It is postulated that this might be a causative factor for the increasing incidence supported by human epidemiology that has shown an association between mobile phone use and thyroid cancer. 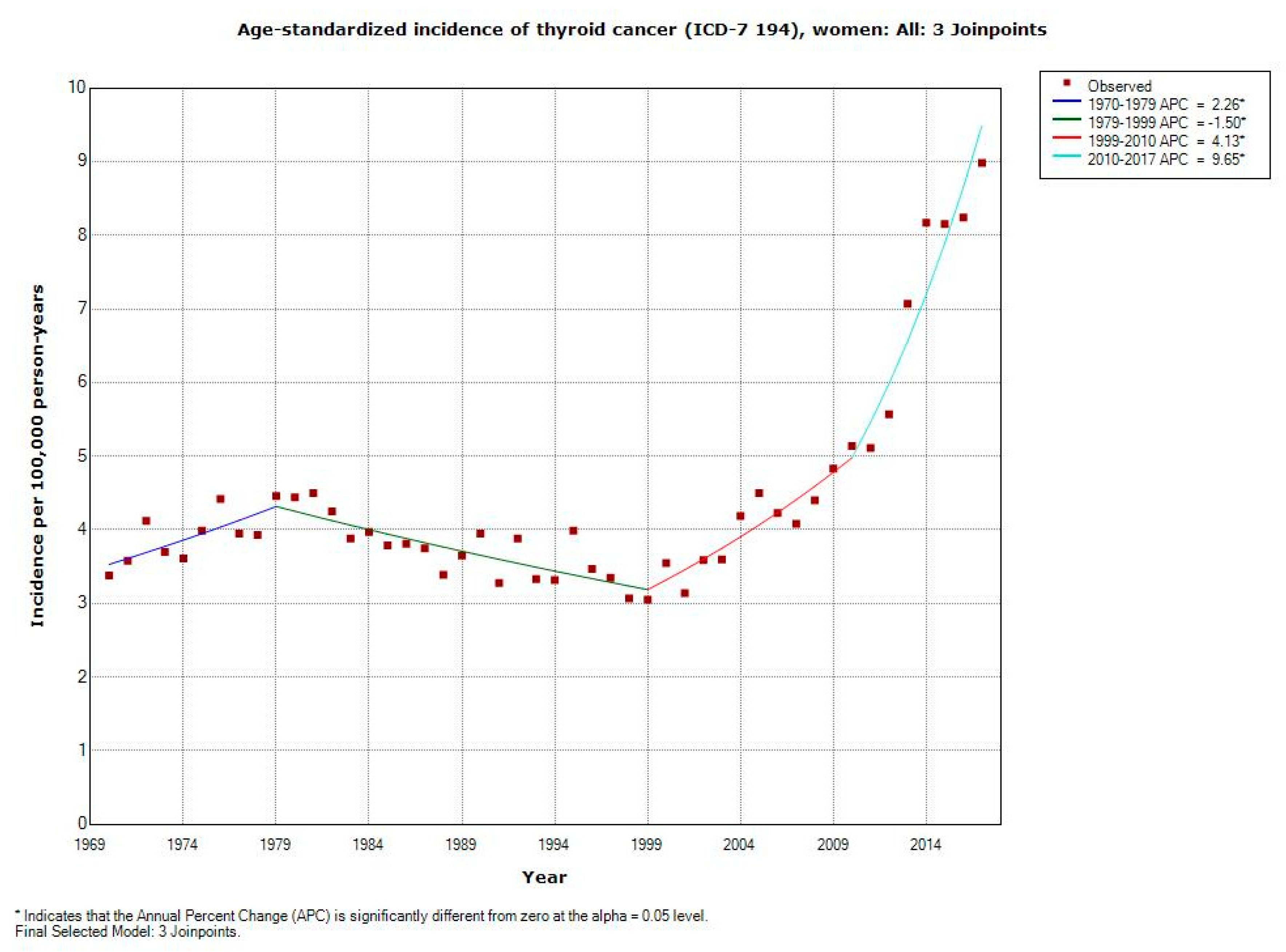 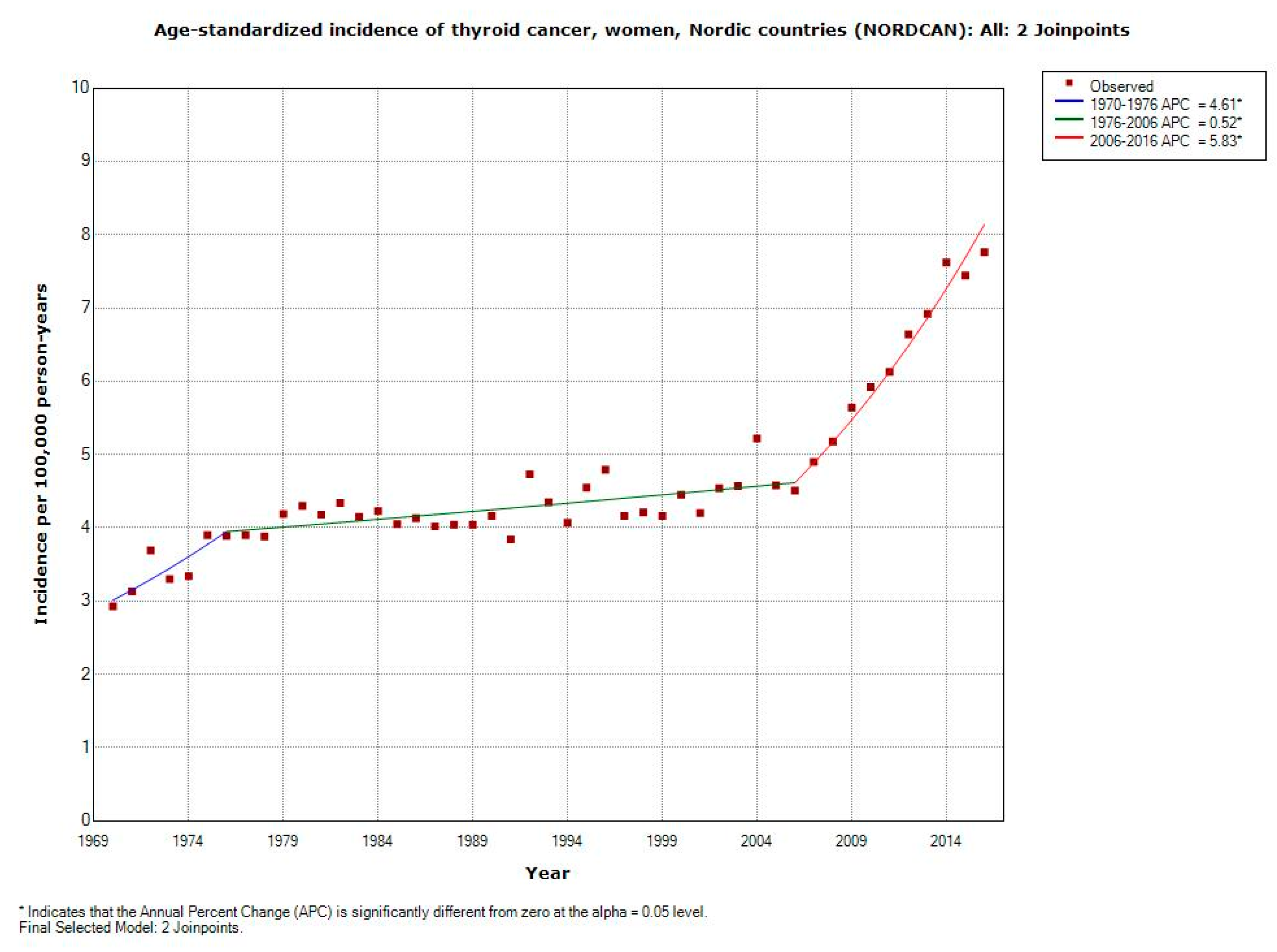 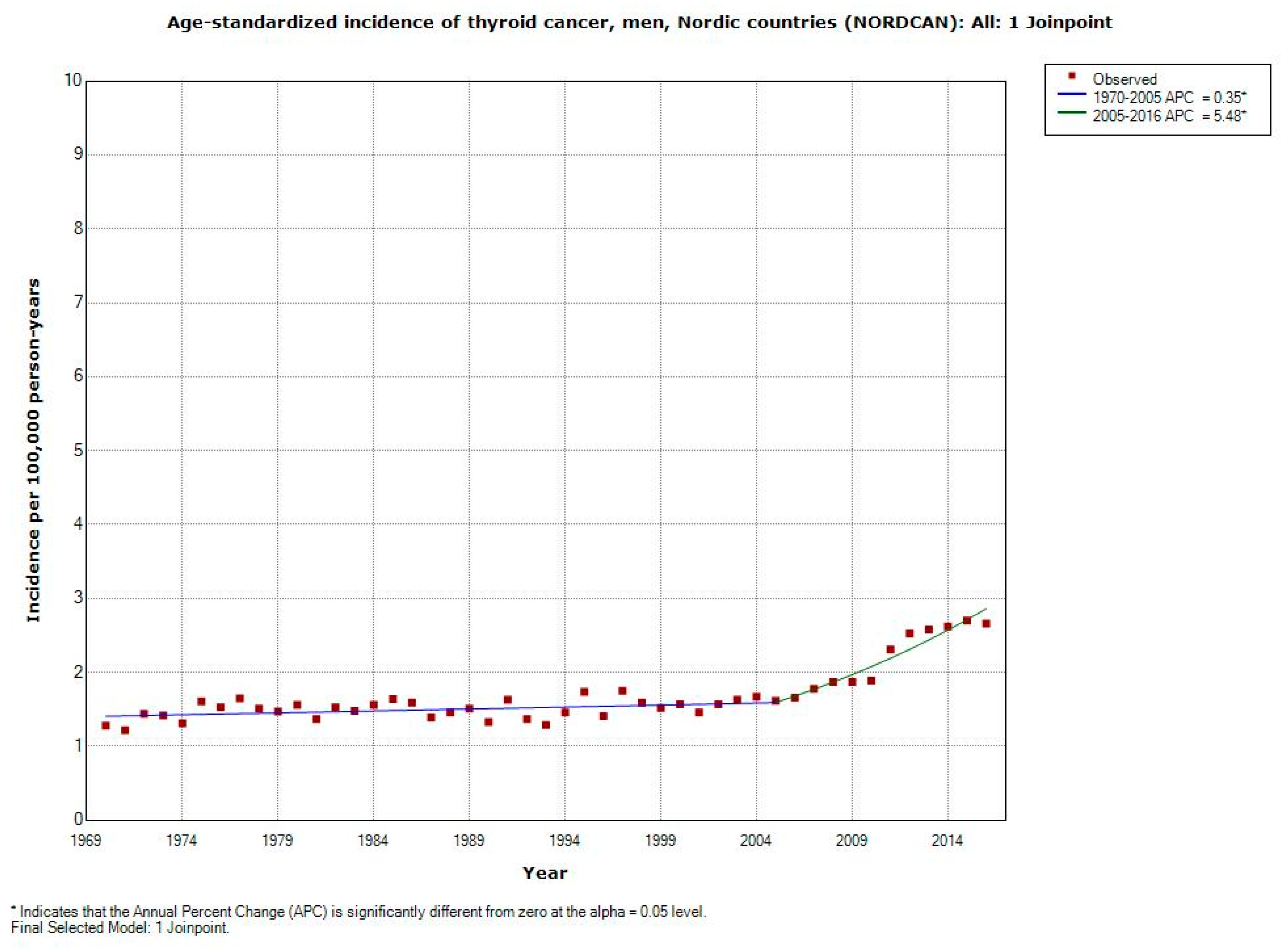