IgG4-Related Disease of the Oral Cavity. Case Series from a Large Single-Center Cohort of Italian Patients

Improving health literacy (HL) is critical for addressing health inequalities. Low literacy rates are believed to be more prevalent in ethnic minorities, which may have an impact on people’s health. For measures to be implemented in this regard, HL must be evaluated to obtain specific indicators. Our aim, therefore, was to develop a version of the European Health Literacy Survey Questionnaire (HLS-EU-Q16), which is recommended to be used with vulnerable populations, suited to Arabic/French-speaking migrants who reside in south-eastern Spain, and to explore its psychometric properties for assessing health literacy in this population. A cross-sectional survey was carried out in a convenient sample of 205 migrants. The structural validity was calculated by a confirmatory factorial analysis (CFA), which suggested appropriate adjustment indicators, and which indicated that the three-dimensional model is adequately adjusted to the data obtained in the study. The coefficient omega showed high internal consistency in the three HL dimensions (health care, disease prevention, and health promotion). Concurrent validity presented a significant correlation with the Newest Vital Sign test (r = 0.390; p < 0.001). The multigroup CFA showed that the heterogeneity of the sample used was not a problem for establishing the structural validity of the scale. The Arabic/French version showed good construct validity. View Full-Text
Keywords: health literacy; migrants; psychometrics; reliability and validity; surveys and questionnaires health literacy; migrants; psychometrics; reliability and validity; surveys and questionnaires
►▼ Show Figures 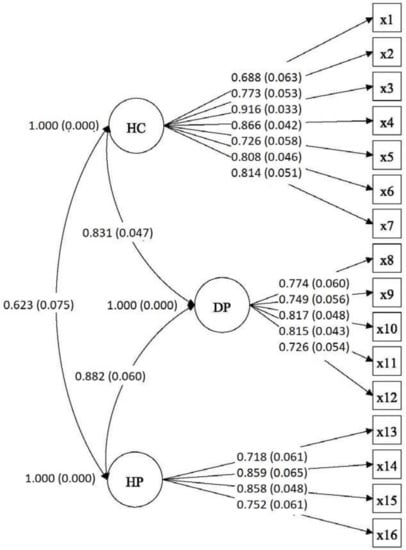