The Turnover Intention among Grassroots Family Planning Staff in the Context of China’s Universal Two-Child Policy: A Case Study of the Xi’an City
Previous Article in Journal

Background: Cesarean section is a surgical procedure, which is the most frequently performed in gynecology and obstetrics. It is commonly believed that an operative delivery is a less painful and safer mode of delivery, which translates into an increasing number of the procedures performed without medical indications. The maternal sequelae of cesarean sections are well elucidated and widely discussed in the literature, while long-term neonatal consequences still remain the issue of research and scientific dispute. The aim of the present paper was to perform a systematic review of current literature regarding pediatrics consequences of cesarean section. Methods: We reviewed available data from PubMed, Science Direct as well as Google Scholar bases concerning early and long-term neonatal sequelae of operative deliveries. The following key words were used: “cesarean section”, “caesarean section”, “neonatal outcomes”, “respiratory disorders”, “asthma”, “obesity”, “overweight”, and “neurological disorders”. A total of 1636 papers were retrieved out of which 27 were selected for the final systematic review whereas 16 articles provided data for meta-analysis. Statistical analyses were performed using RevMan 5.4. To determine the strength of association between the caesarean section and respiratory tract infections, asthma, diabetes type 1 as well as obesity the pooled odds ratios (OR) with the 95% confidence intervals (CI) were calculated. Results: Conducted meta-analyses revealed that caesarean section is a risk factor for respiratory tract infections (pooled OR = 1.30 95%CI 1.06–1.60, p = 0.001), asthma (pooled OR = 1.23 95%CI 1.14–1.33, p < 0.00001) as well as obesity (pooled OR = 1.35 95%CI 1.29–1.41, p < 0.00001) in offspring. Conclusions: The results of the studies included indicated that children delivered by cesarean section more commonly developed respiratory tract infections, obesity and the manifestations of asthma than children delivered vaginally. The risk of developing diabetes mellitus type 1 or neurological disorders in offspring after caesarean section is still under discussion. View Full-Text
Keywords: caesarean section; neonatal outcomes; respiratory disorders; asthma; obesity; overweight; neurological disorders caesarean section; neonatal outcomes; respiratory disorders; asthma; obesity; overweight; neurological disorders
►▼ Show Figures 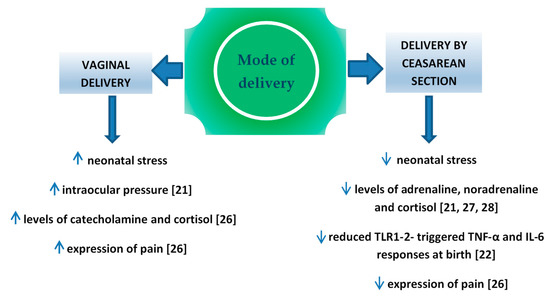