Exploring the State of Gender-Centered Health Research in the Context of Refugee Resettlement in Canada: A Scoping Review
Next Article in Special Issue

Clinical Risk and Overall Survival in Patients with Diabetes Mellitus, Hyperglycemia and Glioblastoma Multiforme. A Review of the Current Literature
Previous Article in Journal

We Need You: Influence of Hiring Demand and Modified Applicant Testing on the Physical Fitness of Law Enforcement Recruits
Previous Article in Special Issue

Hypertension Is Associated with Increased Risk of Diabetic Lung

Lung function is often impaired in diabetic patients, especially in a restrictive pattern, which has recently been described as the diabetic lung. Since hypertension (HTN) is common in diabetic patients, our study investigated whether HTN acts as an aggravating factor in diabetic lung. Within the cross-sectional study from the 6th Korean National Health and Nutrition Examination Survey (KNHANES), fasting plasma glucose (FPG), blood pressure (BP), pulmonary function, and laboratory data were examined in 4644 subjects aged between 40 and 79 years. A multivariate regression model was used to investigate the relationship between BP, FPG, and pulmonary function. Lung function was significantly reduced in the HTN (p = 0.001), impaired fasting glucose (IFG) (p < 0.001), and diabetes mellitus (DM) (p < 0.001) groups. Next, a multivariate logistic regression model was used to derive the odds ratio (OR) of reduced lung function based on the presence of IFG, DM, and HTN. The OR of reduced forced vital capacity (FVCp < 80%) was 3.30 (p < 0.001) in the HTN-DM group and 2.30 (p < 0.001) in the normal BP-DM group, when compared with the normal BP-normal FPG group. The combination of HTN and DM had the strongest negative effect on FVC. The results presented in this study indicate that diabetes and hypertension have a synergistic association with impaired lung function. View Full-Text
Keywords: diabetic lung; hypertension; diabetes; impaired fasting glucose; pulmonary function diabetic lung; hypertension; diabetes; impaired fasting glucose; pulmonary function
►▼ Show Figures 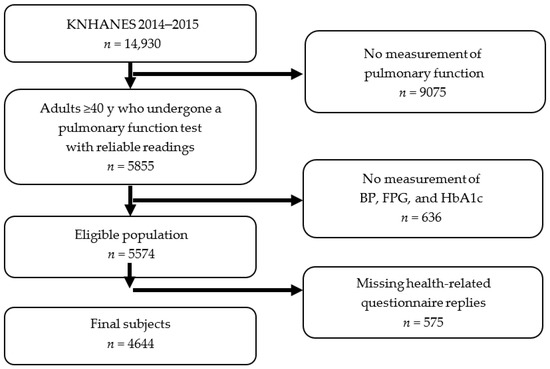