Effectiveness of a Physical Therapeutic Exercise Programme for Caregivers of Dependent Patients: A Pragmatic Randomised Controlled Trial from Spanish Primary Care
Next Article in Special Issue

Citius, Altius, Fortius; Is It Enough to Achieve Success in Basketball?
Previous Article in Special Issue

Diabetes is known to be one of the major global epidemic diseases, significantly associated with mortality and morbidity worldwide, conferring a substantial burden to the health care system [1,2,3]. The global rate of diabetes prevalence has increased from 4.7% in 1980 to 8.5% in 2014, rising to 9.3% (463 million people) in 2019 [1]. Projections indicate that the total prevalence of diabetes will result in about 578 million cases by 2030 and 700 million by 2045, and will be prevalent in low- and middle-income countries [4]. Therefore, early detection of diabetes in its incipient stages is a health care priority. Appropriate screening devices and standardized methods are crucial to prevent this potentially inauspicious life condition [5,6]. Traditionally, detection of diabetes, relies primarily on the estimation of blood glucose concentration, carried out through the capillary blood glucose testing using a reflectance blood glucose meter, succeeded by diagnostic confirmatory tests (fasting plasma glucose (FPG) and/or an oral glucose tolerance test (OGTT) with a 2-h plasma glucose level of 200 mg/dL (11.1 mmol/L) applying standard criteria to find out the diagnosis of diabetes [7]. An FPG ≥ 126 mg/dL (7.0 mmol/L) requires a retest to confirm the diagnosis. Glycated hemoglobin (HbA1c) is the ‘gold standard’ diagnostic and monitoring technique for metabolic control. Although the finger-prick method is accepted as a non-invasive strategy for direct and accurate measurement of blood glucose, it has been reported that often patients are psychologically opposed to receiving the test. Previous cross-sectional studies have shown that gingival bleeding may provide an objective diagnostic method for early detection of diabetes, as part of routine developmental surveillance. The gingival bleeding is a characteristic sign of periodontal inflammation that shows a favorable profile for use as a blood glucose test [8,9,10,11,12,13,14]. Interestingly, the presence of an inflammatory lesion of the periodontium is detected through bleeding determination providing an objective diagnostic method for periodontal disease. Particularly, bleeding may be the clinically apparent source to estimate the blood glucose level. Stein et al. [15], in 1969, documented the initial observations about a potential routine source in clinical detection of diabetes, proposing the gingival blood test in estimating the blood glucose level. The authors showed that using gingival blood was a suitable and secure method in collecting blood but failing to replace the conventional glucose testing methods. Based on literature evidence [11,14,15,16,17,18], our study aimed to compare gingival crevicular blood with finger-stick blood glucose measurements using a self-monitoring glucometer, to evaluate whether gingival crevicular blood could be an alternative to allow accurate chairside glucose testing.

A cross-sectional comparative study was carried out among diabetic and systemically healthy patients. The subsection of inclusion criteria was the following: (I) type 2 diabetes mellitus determined by at least one of the fasting plasma glucose ≥ 126 mg/dL; (II) random plasma glucose ≥ 200 mg/dL; (III) hemoglobin A1c (HbA1c) between 7.5 and 11.0%, (IV) use of antidiabetic medications; and (V) positive to bleeding on probing. Patients were ineligible for participation if any of the following conditions existed: a diagnosis of any malignancy, history of organ transplant, diagnosis of dementia, cardiovascular diseases, other systemic or concurrent diseases, and pregnancy were excluded from the study [4,6,7]. There was a total of one-hundred-forty patients aged 31–67 years, with a mean age (± SD) of 47.72 ± 9.47 for the diabetic group, and a mean (± SD) of 48.83± 11.97 for the non-diabetic group.
Before the glucose level estimation, a standardized clinical periodontal examination was performed employing a mouth mirror and a Michigan type ‘O’ periodontal probe at six sites on each tooth (mesiobuccal, midbuccal, distobuccal, mesiolingual, midlingual, and distolingual), by a single examiner, to detect the bleeding gingival site offering the profuse bleeding for comparison of gingival crevicular blood glucose (GCBG) sample collection. Periodontal probing was carried out under cotton roll isolation and after air drying with an air syringe. Lengths of 1–2 mm bore glass capillary tubing were used as blood receiver tubes before being transferred to the preloaded test strip into the glucometer (Accu-Chek Active, Roche Diagnostics, Indianapolis, IN, USA), which needs only approximately 5 s to report blood glucose measurements. Then, the corresponding values were recorded. Therefore, at the same visit, a simultaneous capillary finger-prick was performed and analyzed using a single calibrated and validated chairside glucometer, by an accredited registered nurse. Using the device, a finger was pricked to release a small sample of blood into the test strip, which was then analyzed by the glucometer that outputs the blood glucose reading. The glucometer is an electrochemical system for blood glucose measurement, based on an amperometric enzyme electrode principle. The system is provided with dry reagent test strips that are calibrated to report plasma glucose values. After the combination of the glucose in the blood sample with the enzyme glucose dehydrogenase, there is the conversion to gluconolactone, which generates an electrical charge. Then, the charge is measured by the electrodes incorporated in the test strip, and a digital read-out is given.

Ethical approval for this study was obtained from the Ethics Committee Approval INTL_ALITSHCOOP/DentPath/2020_SLK and was conducted according to Good Clinical Practice and the Declaration of Helsinki [19]. Written informed consent was obtained from all patients before the study.

For each measurement, the mean value and standard deviation (SD) were extracted. Pearson’s product–moment correlation analysis was applied to assess the associations between the studied variables. Differences in mean values between groups were analyzed using the independent Student’s two-tailed t-test for normally distributed data. All statistical procedures were performed at a level of significance of 5% (P < 0.05). All data were examined using SPSS for Windows version 11 (SPSS Inc., Chicago, IL, USA).

The blood glucose measurement is generally performed using a self-monitoring glucometer. Our study aimed to investigate whether the gingival blood glucose might be a source for glucometric analysis during the dental office visit. The use of gingival crevicular blood (GCB) is appealing owing to its rapidity and extensive availability, the potential for rapid assessment, and having an additional benefit in patients with diabetes by reducing the stress. Furthermore, GCB should be used in dental routine after periodontal evaluation. Despite the intuitive advantages, gingival crevicular blood has not proven superior to the capillary finger-stick test. The major consideration is that the presence of bleeding has the potential to be a realistic alternative to screen diabetes in selected patients, but longitudinal studies are needed to confirm the effectiveness of disease detection. In considering the developments in screening methods, the exploration and consideration of GCB as an alternative screening tool is still needed. Glucometer performed in the dental office may be an important device in diagnosing diabetes so it can be addressed during a periodontal examination, for its simplicity, cheapness, and minimum disturbance for individuals [11,12,13]. In addition, gingival crevicular blood levels may be needed to maintain an adequate diabetic output [15,18,19,20,21]. Therefore, there is also the limited applicability as a routine technique for the screening due to its requirement of a minimum blood volume. 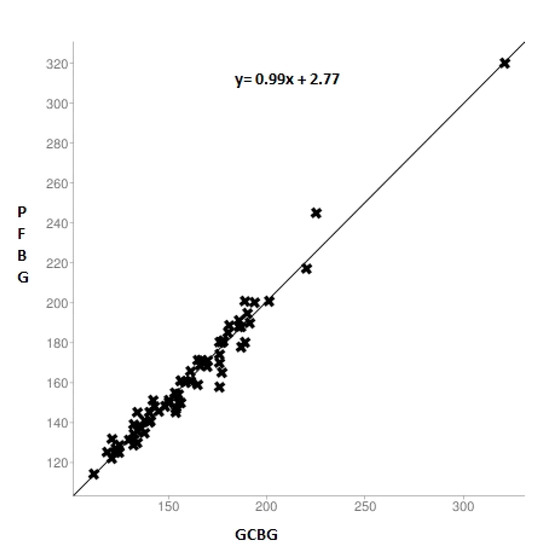 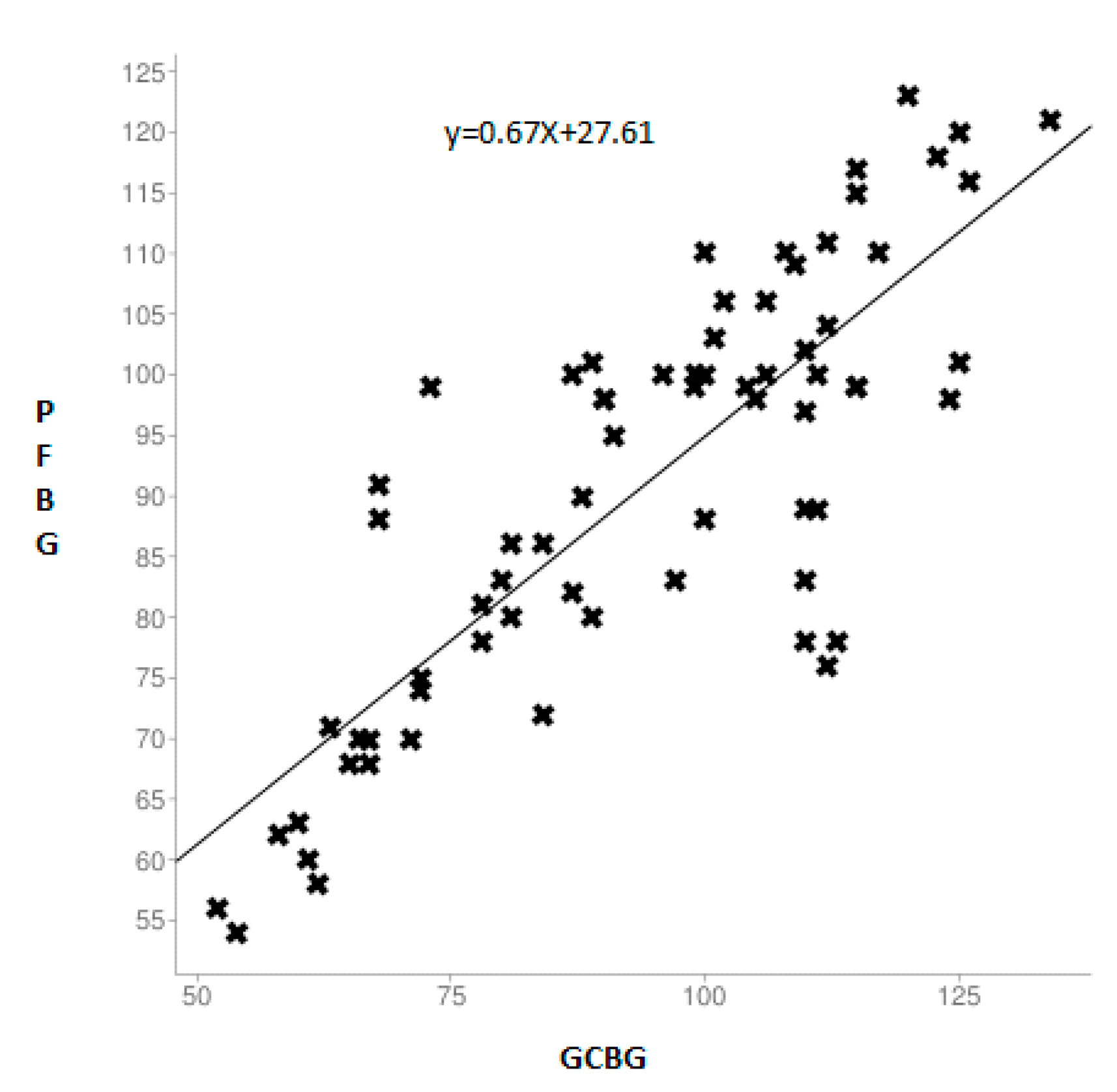