Experiences and Attitudes of People with HIV/AIDS: A Systematic Review of Qualitative Studies
Next Article in Special Issue

HIV Stigma and Moral Judgement: Qualitative Exploration of the Experiences of HIV Stigma and Discrimination among Married Men Living with HIV in Yogyakarta
Previous Article in Special Issue

Breastfeeding and the Risk of Infant Illness in Asia: A Review

During pregnancy, maternal nutrition plays a key role in fetal development and neonatal growth [1]. Specifically, during the preconception and gestational periods, inadequate intake of micronutrients might affect the risk of adverse pregnancy outcomes [2]. In line, mounting evidence suggests a strictly interplay between newborn and mother metabolisms, which in turn involve nutrient stores and intakes [3,4,5]. For this reason, the World Health Organization (WHO) and the Food and Agricultural Organization (FAO) developed several dietary recommendations and strategies for the prevention of adverse pregnancy outcomes [6]. Among these, pre-term birth (PTB; birth before 37 weeks of gestation) and small for gestational age (SGA; birth weight below the 10th percentile for gestational age) represent the major causes of death among newborns [7,8,9].
Folate—a water-soluble vitamin B found in fruits, legumes, cereals, and green leafy vegetables—is required for placental tissue growth [10] and neural tube formation [11]. More recently, its role as a methyl donor in several molecular pathways and epigenetic mechanisms has been demonstrated [12,13]. Folate requirement among women of childbearing age is usually of 400 μg/day, but it should be raised to 600 μg/day during the periconceptional period [14]. To meet this need, in 1998, the United States began the compulsory fortification of cereal flour enriched with folic acid [15]. Subsequently, several countries promoted policies for folate fortification [16]. Nowadays, developed countries proposed folic acid supplementation as a strategy to ensure the correct fetal growth [17]. However, several lines of evidence showed that folic acid supplementation was often insufficient in the preconception period, with several negative effects on pregnancy and neonatal outcomes [18].
Thus, further studies should investigate social and behavioral determinants that might affect the adherence to these recommendations and increase the awareness about benefits of folic acid supplement use [19,20,21,22]. Although inadequate folate concentrations were often associated with anencephaly and spina bifida [23], its impact on other adverse pregnancy outcomes is not fully understood. Interestingly, there was also evidence that folate status and supplement use were associated with a slightly increased risk for wheeze and lower respiratory tract infections in newborns [24,25,26].
Our hypothesis is that folate deficiency leads to PTB [27] and SGA [28,29,30,31,32,33,34,35,36,37,38,39,40,41,42,43,44,45,46], but further studies are necessary to better investigate the potential protective role of adequate folate intake and/or folic acid supplementation. To fill this gap, the primary aim of the current study was to describe the prevalence of dietary folate intake and its determinants among pregnant women from Catania (Italy). We also evaluated folic acid supplement use according to national recommendations. Finally, we investigated the effect of folate intake and folic acid supplement use on neonatal outcomes in a subgroup of women who completed pregnancy.

In the current analysis, we used data from the Mamma & Bambino project, an ongoing mother-child cohort settled in Catania, Italy, which aims to understand the effects of social, environmental, behavioral, and molecular factors on maternal and infant health. Study design and protocols have been fully described elsewhere [47,48] and at the website http://www.birthcohorts.net. From 2015, this cohort prospectively recruits pregnant women during their prenatal genetic counselling (median gestational age = 16 weeks; range = 4–20 weeks) at the Azienda Ospedaliera Universitaria “Policlinico-Vittorio Emanuele” (Catania, Italy). Pregnancy is the unit of observation with planned follow-up of children at birth, one and two years. Women with plurality, pre-existing medical conditions or pregnancy complications (i.e., autoimmune and/or chronic diseases, preeclampsia, gestational hypertension, and diabetes), intrauterine fetal death, and congenital malformations were excluded from this study. The study protocol has been approved by the ethics committee of the involved Institution (CE Catania 2; Prot. N. 227/BE and 275/BE). Participants were informed and gave written their informed consent of the purpose and procedures of the study, which was conducted according to the Declaration of Helsinki.

At the recruitment, socio-demographic and behavioral information was collected by trained epidemiologist through structured questionnaires. Educational level was classified as low (primary school), medium (high school), or high (degree or higher), while employment status was categorized as unemployment (including students and housewives) and employment (both part-time and full-time). Women were also classified in those who lived alone or in couple, and in those who had children or not. With respect to smoking status, women were classified as non-smokers, former smokers, or current smokers. Women were asked to report their weight and height before pregnancy and pregestational BMI was calculated as weight in kg divided by height in m2 and classified according to the WHO criteria [49]. Women were also asked to report if they followed dietary restrictions or suffered from food intolerances.

2.3. Assessment of Dietary Folate Intake and Adherence to Mediterranean Diet

Dietary folate intake was evaluated using a 95-item semi-quantitative Food Frequency Questionnaire (FFQ) referred to 30 days before recruitment [12,13,50,51,52] and hence to the early phase of pregnancy (i.e., from the beginning to the 16 week of gestation). The extended form of this tool was adapted from a 46-item FFQ, which has been validated for the assessment of folate intake in Italian women of child-bearing age [13]. For each food item, information on frequency of consumption (twelve categories from “almost never” to “two or more times a day”) and portion size (small, medium, and large) were collected using an indicative photograph atlas, and then converted into daily food intakes. Dietary folate intake was calculated using the table of food composition of the US Department of Agriculture (http://ndb.nal.usda.gov/), adapted to typical Italian food consumption. Inadequate folate intake was defined as an intake < 600 μg/day of dietary folate equivalents (DFEs) [53]. Adherence to the Mediterranean Diet (MD) was evaluated using the 9-item Mediterranean Diet Score (MDS), as previously described [54,55]. For this reason, ranged from 0 (non-adherence) to 9 (perfect adherence) and adherence to MD was classified as low (MDS ≤ 3), medium (MDS = 4–6), or high (MDS > 6) [56].

2.4. Use of Folic Acid Supplements

Statistical analyses were performed using SPSS software version 26.0 (SPSS, Chicago, IL, USA). Characteristics of pregnant women according to dietary folate intake and folic acid supplement use were described using frequency (%) or median and interquartile range (IQR). Categorical variables were compared using Chi-squared test. Continuous variables were checked for normality using the Kolmogorov-Smirnov test and compared using the Mann-Whitney U test. Logistic regression analysis was used to identify main determinants of inadequate folate intake and folic acid supplement use. The models included variables that were significantly associated with inadequate folate intake or folic acid supplement use in the univariate analysis. Results were reported as Odds ratio (OR) and 95% confidence interval (CI). All statistical tests were two-sided, and p-values < 0.05 were considered statistically significant.

3.2. Use of Folic Acid Supplements

We next examined the use of folic acid supplements among women of the Mamma & Bambino cohort. Figure 2A shows that only 2.8% of women did not take supplements, 74.8% were classified as insufficient users before pregnancy, while 22.4% met the recommendation before and during pregnancy. We also compared supplement use between women with inadequate folate intake and those with adequate folate intake (Figure 2B). Compared with the latter, we observed higher proportions of non-users and recommended users among women with inadequate folate intake. By contrast, a higher proportion of insufficient users has been observed among women with adequate dietary folate intake. However, these differences were not statistically significant. With respect to neonatal outcomes, we did not observe differences in the proportion of preterm birth and inadequate birthweight for gestational age (p = 0.430 and p = 0.770, respectively).

3.3. Determinants of Folic Acid Supplement USE Among Women with Inadequate Folate Intake

We next aimed to identify the main determinants of folic acid supplement use among 257 women who did not meet the recommendation of dietary folate intake. Univariate analysis showed that women who did not take supplements were less educated (p < 0001) and reported lower MDS (p = 0.047) than supplement users (Table 2). Notably, logistic regression analysis further confirmed that women with low educational level were more likely to not take folic acid supplements than their more educated counterpart (OR = 5.574; 95%CI = 1.487–21.435; p = 0.012).

3.4. Use of Supplements and Neonatal Outcomes

Finally, we examined the effect of folic acid supplement use on neonatal outcomes among women with inadequate folate intake. With this in mind, we investigated 184 women with inadequate folate intake, who completed singleton pregnancy. In this subsample, median gestational duration was 39 weeks, with 9.8% of preterm deliveries. With respect to neonatal anthropometric measures, median values of birth weight and length were 3.25 Kg (range = 1.0–4.75 Kg) and 50.0 cm (range = 41–56 cm), respectively. According to sex-specific national reference charts [51], approximately 84.1% of newborns were adequate for gestational age (AGA), while 5.5% and 10.4% have been classified as SGA or LGA, respectively. Compared with women who met supplement recommendation, we observed a higher proportion of SGA newborns among those who did not take supplements before pregnancy and those who did not take any at all (p = 0.009) (Figure 3A). By contrast, the proportion of AGA newborns was the highest among women who took supplements before and during pregnancy. Instead, no difference in the distribution of LGA newborns was evident. We also noted that the proportion of preterm newborns was higher among non-users and insufficient users of folic acid supplements (Figure 3B). However, these differences were not statistically significant. 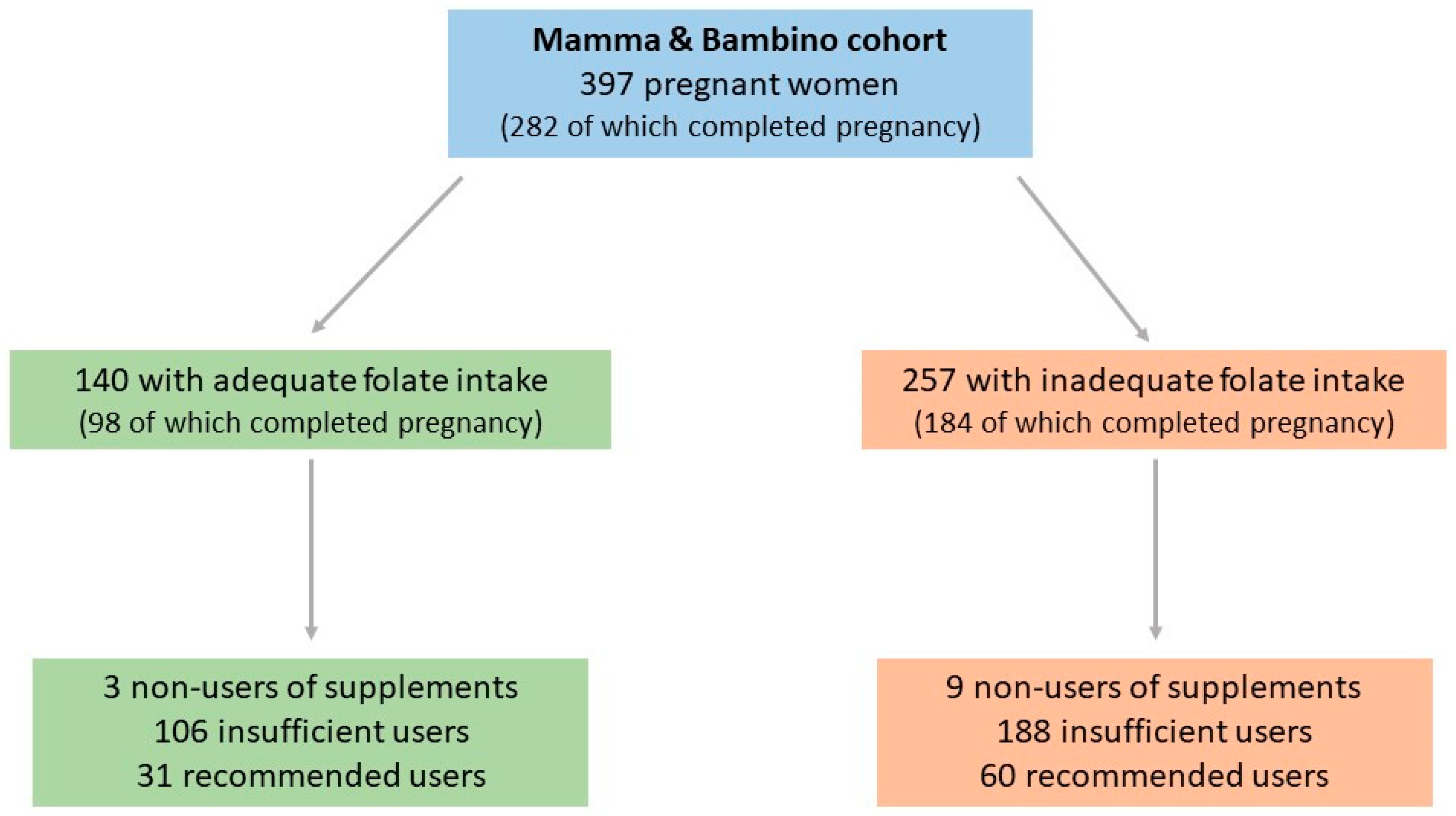