Children with Developmental Disabilities in Low- and Middle-Income Countries: More Neglected and Physically Punished
Next Article in Special Issue

Lifetime and Twelve-Month Prevalence, Persistence, and Unmet Treatment Needs of Mood, Anxiety, and Substance Use Disorders in African American and U.S. versus Foreign-Born Caribbean Women

Is It High Time to Increase Elite Soccer Substitutions Permanently?

The overall load of soccer matches (i.e., cognitive decision making, tactical and technical proficiency inside a set of well-advanced physical capacities) results in postmatch fatigue which is associated with high match-induced muscle damage and inflammatory responses, dehydration, and glycogen depletion [1,2,3]. A systematic review concluded that a period of ~3 days postmatch, for example, is insufficient to fully recover homeostatic balance caused by a soccer match load [1]. Compared to basketball, volleyball, and handball, soccer is the most demanding sport with much higher muscle damage and inflammatory markers than the other sports [4]. Indeed, another systematic review showed that soccer has the largest total running distances, including high-intensity running and sprinting in comparison with futsal, basketball, and handball [5], and increments in soccer demands have been recognized through the years [6]. Barnes et al. investigated physical and technical soccer performance across a 7-season period in the English Premier League. Their data confirmed an increment of “only” ~2% in total distance covered per match, however they reported impressive increments in distances covered in high-intensity running distance (~30%), actions (~50%), sprint distance (~35%), and the number of sprints (~85%) [6]. This high-intensity increment may be a concern because there is a strong association between high-speed running and injuries [7,8]. Additionally, due to commitments for economic and entertainment reasons, soccer has presented congested schedules (i.e., multiple games within 72–96 h), which is a relevant issue for medical staff [9,10]. For instance, data over 11 seasons (from 27 teams) exhibited that matches with short recovery (≤four days) were related to augmented muscle injury rates when compared with longer recovery periods (≥six days) [11], generating the average cost of an elite player injured of ~ €500,000 (~1 month) [12]. Soccer is also associated with long-term sequelae due to the high loading on hip and knee joints [13], early osteoarthritis and poor quality of life after retirement [14]. Additionally, soccer injuries may produce a meaningful loss of time from participation, or even early retirement [15].
To confront the issues aforementioned, several studies have investigated strategies to improve recovery, and to minimize soccer-induced muscle damage and fatigue [2]. For example, compression garments [16,17], cold water immersion [2], myofascial release [18], etc. The literature has a myriad of studies seeking to find smarter training programs or better control of the training load [8], nutritional aids [19], sleep hygiene [20], and other strategies. Surprisingly, there are no scientific studies investigating the potential issues caused by the rules of the game itself. Reasoning scientifically, the rules of any sport are the “cause”, and the “way to play” is the effect. The injury rate is noticeably higher (~10 times) during soccer matches than during training sessions [21]. Therefore, rule evaluation to manage the main causes of issues (i.e., match) is necessary, since rules should often be updated to enhance any sport for safety (e.g., shin guards), prevention (e.g., time for hydration), entertainment, cleaner (e.g., video referee), etc.
On 11 March 2020, the World Health Organization announced the coronavirus disease (COVID-19) outbreak as a pandemic, and the regular sports season worldwide was interrupted. After months of interruption (~3 or 4 months), most sports leagues have resumed the season. Due to the overlap of competition schedules caused by the COVID-19 interruption, most soccer teams will face very congested schedules on returning (e.g., games every Sunday and Wednesday), which potentially increase the risk of injuries (e.g., muscle and ligament injuries) [10,11]. Thus, The Fédération Internationale de Football Association (FIFA) has changed the substitution rule (temporarily) increasing it from three substitutions to up to five for each team (each match), aiming to minimize the impact on player welfare [22]. There is no research regarding a deep investigation on the impact of potential rule-induced physical demands in soccer (e.g., area per player and fewer substitutes forced by the law of the game), and none comparing different sports in this context. Understanding the potential differences between the rules which may impact sport-specific fatigue and eventually injury risk [10] might be useful for practical applications (e.g., updating and enhancing rules for a safer/healthier sport). Therefore, this study aimed to evaluate the impact of the rule-induced physical demands among soccer, futsal, basketball and handball, focusing on the substitution rules (including changes due to COVID-19). We hypothesized that soccer would have potentially higher rule-induced physical demands than other team sports, even considering the changes due to COVID-19.

In order to meet the aims of this study, first, rule-specific information for the international top men (elite) was obtained from each team sport selected. Two authors independently highlighted which rules (in each sport) might have an impact on the physical demands of the players (e.g., total distance covered). For example, the size of the goal (or basket) has a minimal potential effect on physical demands. On the other hand, the dimensions of the court/field (absolute area and relative area per player), time of playing, and the number of substitutes (absolute and relative) logically impact the demands of the sport. After a consensus between the two authors, the data were collected. Then, data were organized in Excel sheets for calculations (e.g., percentage of players available—relative substitutions allowed/total players available). Quantitative and qualitative analyses were performed and confronted with the literature already existent on physiological (e.g., muscle damage and inflammatory markers) and time−motion (e.g., number of sprints, jumps, distances covered in several speed zones) sport demands.

Four invasive team sports (i.e., soccer, futsal, handball, and basketball) were selected because these sports have several similarities, and are popular worldwide. All are invasive intermittent team sports, have body contact, require quick (and accurate) decision making and optimum scanning (reading the game), and the purpose is to score a goal or a basket on the opponent’s territory [23,24].
The specific rule information of each team sport was obtained from official websites in June of 2020: soccer, futsal [25], basketball [26], and handball [27]. To meet the current research aims, specific information from the rules which may impact the physical demand of the players was collected. For instance, information about the number of players on the field (soccer) or court (other team sports), availability of substitutes on the bench area and when they are allowed to play (including the substitutions changes due to COVID-19), time load of each team sport, time-outs, field/court dimensions and the relation between and among that information.

2.3. Number of Games per Season

The number of games per season (2018–2019) from the top four teams (international, men, elite) of each sport were obtained from websites of each team or official federation. The teams for each sport are presented as a table in the supplementary document (Table S1).

This study developed a descriptive, cross-sectional design, therefore quantitative data presentation is essentially descriptive in nature. Due to the nature of this study (i.e., there is only one rule for each sport), the data were not judged from a traditional statistical point of view (e.g., p value, mean values, and standard deviation). Alternatively, a qualitative analysis was performed, conducted by two authors focusing on the potential practical implications. All other authors read this analysis carefully, and edits have been combined. Such kind of data analysis (e.g., progressive statistics and case research) has been used in Sports Medicine and Sports Science fields [28,29].

Data about the number of players, substitutions, time (total, breaks, time-outs), and dimensions of the field/court are presented in Table 1. Overall, soccer rules demand higher dimensions of the field and lower substitutions, both in absolute and relative values.
Soccer has no time-out during the game, but futsal, basketball, and handball do not have this rule. The offside rule may increase the physical demand (please, see discussion).
Table 2 shows simulations to equate the soccer dimension, changing the current court dimensions.
Simulations to equate soccer to other team sports by decreasing the number of players of the other team sports or increasing the number of soccer players are shown in Figure 1 and Figure 2.

3.2. Number of Games per Season

Basketball presented the highest number of matches per season, followed by soccer and futsal (similar), and lately handball in top clubs (Table 3).
The proportion between dimensions of the field/courts, number of players, the ratio between total match time and number of matches/season and substitutions simulations are shown in Figure 3.

We conclude that elite soccer has remarkably higher overall rule-induced physical demands than futsal, basketball, and handball, even acknowledging the change in substitutions due to the COVID-19 pandemic. As a practical application, allowing the increase of elite soccer substitutions permanently (e.g., unlimited) across the game is a simple strategy to improve recovery and to mitigate the enormous overall soccer demands. Since soccer injury rate is much higher during matches (vs. training sessions [21]), this rule change may help to face congested schedules and benefit injury prevention. 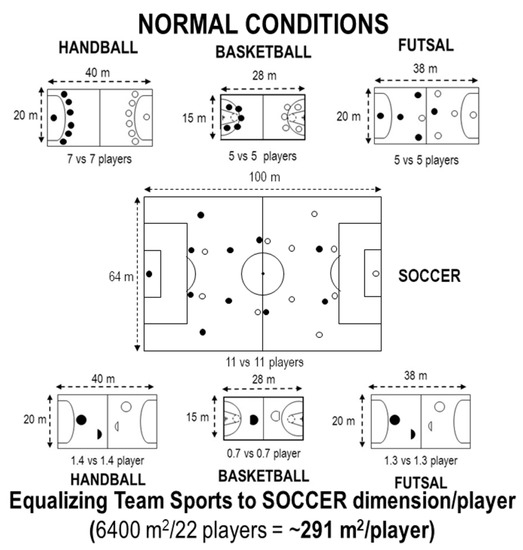 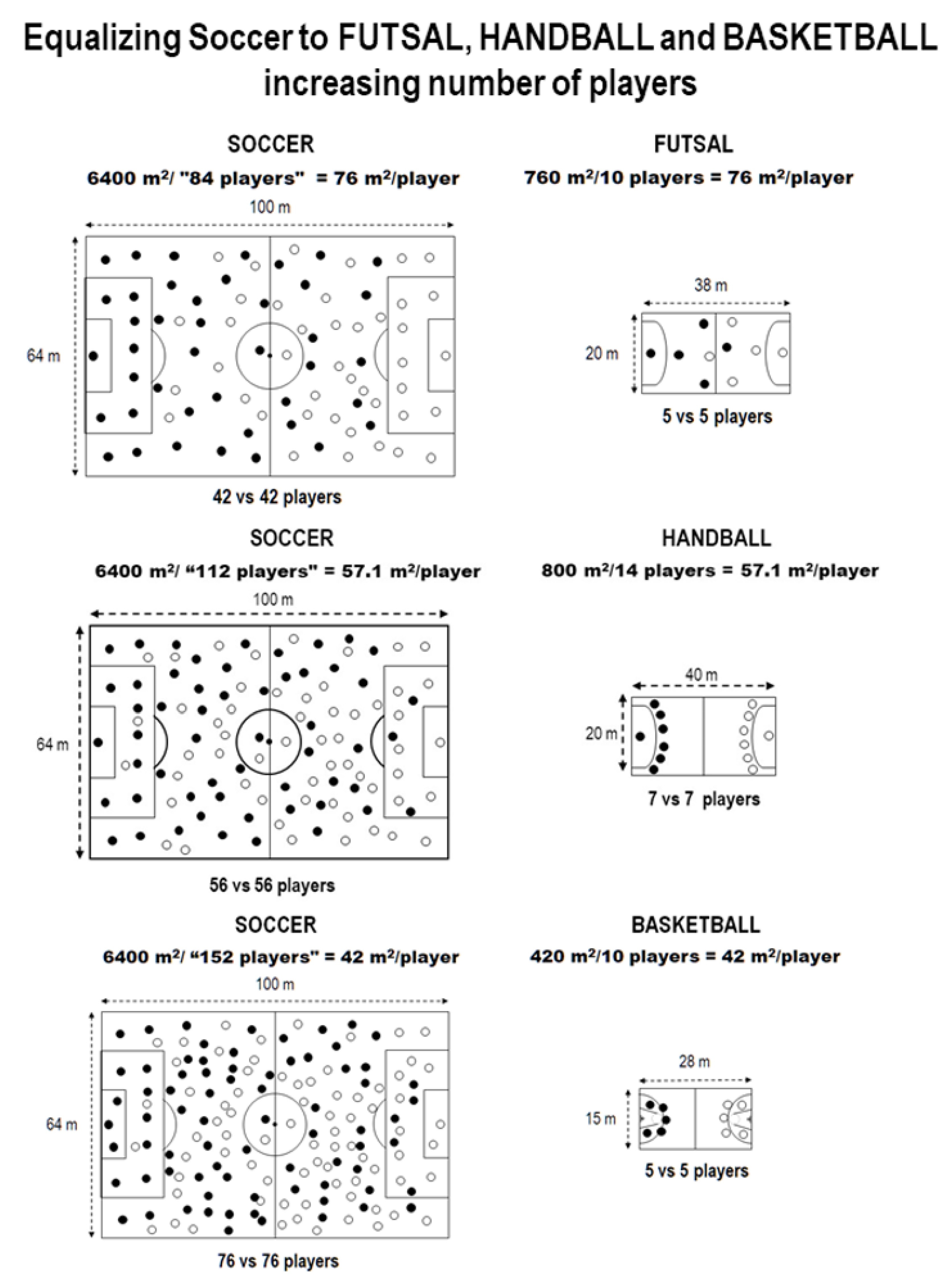 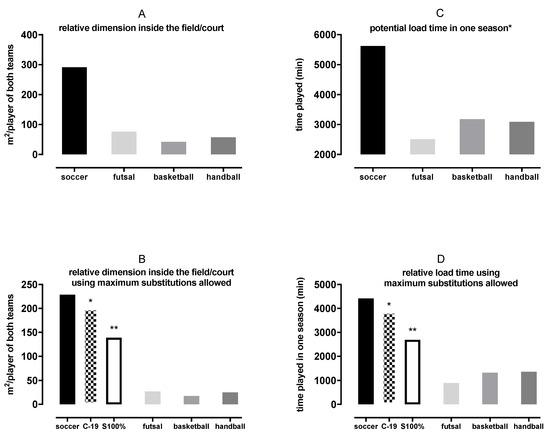