A cross-sectional design was used in this study with an observational and descriptive perspective. The sample selection process used was non-probabilistic and convenient. The total sample was composed of 85 adolescent students with ages ranging between 12 and 17 years old (Mage = 14.5, SD = 1.6). According to the profile of the participants in the present study, 41 were boys (Mage = 14.6, SD = 1.7) and 44 were girls (Mage = 14.4, SD = 1.6). Both student groups were recruited from a secondary school in a village in Granada province, Andalusia region. This educative context was representative of that town because it was the only secondary school of the village. A total of 140 students from four classrooms were invited to participate but only 85 accepted to be part of this study (60.7% of the total). There were not any dropout and all participants finished the study.
An inclusion criterion for adolescent students in this study, was to have no illness limitation as measured by a bioelectrical impedance analysis and no history of neuropsychological impairment that could affect the results of the experiment. All variables obtained were subjective (questionnaires) except for clinical characteristics. All participants were selected for the study through information advisor of center, read and signed an informed consent statement before taking part in the study. The participants were fully debriefed about the purpose of the study at the end of experiments. The wide status of age and number of participants is explained because of the non-obligatory nature of the study.
Considering a statistical power of 80% (z), a type 1 margin of error or alpha of 0.05, a response distribution of 50% (r) and sample population of young people in the period of secondary school (12–17 years) (N = 184) in the village, the sample size of the present study was in the recommended range. The following formulas were used [33]:
x = Z(c/100) 2r (100 − r)
n = N x/((N − 1) E2 + x)
E = Sqrt [(N − n) x/n(N − 1)]

Clinical characteristics such as body weight (kg) and body mass index (BMI)(kg/m2) were measured by bioelectrical impedance analysis with a Tanita SC 330s. With the intention of specifying groups within BMI reference criteria of World Health Organization (WHO) (https://gateway.euro.who.int/en/indicators/mn_survey_19-cut-off-for-bmi-according-to-who-standards/) [34], all BMI status (underweight, normal weight, overweight/obese) were calculated to relate with clinical characteristics, physical self-perception profile, and self-reported physical fitness. Body height (cm) was measured using a stadiometer (Seca 22, Hamburg, Germany). In addition, all participants completed a physical self-perception profile (PSPP) questionnaire and a self-reported physical fitness assessment by IFIS.
Physical self-perception profile (PSPP) [12] was used in the Spanish version [9] to measure the physical self-confidence of adolescent students in this study. The PSPP examines the students’ PA and sports practice in their daily life, as well as their sports habits in their leisure time, aiming to better understand the physical self-concept of these students. If the physical capacity perception is more positive, the levels of participation in PA are probably going to increase in children and young people [35]. A total of 30 items make up this questionnaire, and they are grouped in five subscales [9,12]: physical condition (physically active, physical performance, etc.), attractive body (confidence in body image, maintain an attractive body), sport competence (ability to learn sports, sportsmanship, sport confidence), physical strength (confidence of one’s own strength in diverse physical situations, muscular improvement), and self-confidence (satisfaction with one’s physical condition and physical fitness). The possible Likert-scale answers ranged from “totally disagree” (1) to “totally agree” (4). The reliability of the PSPP Spanish version was highly significant (α = between 0.89 and 0.69) and the internal consistency ranged from 0.70 (physical strength) to 0.80 (sport competence) [9].
The international fitness scale (IFIS) [7] was used to predict the self-reported physical fitness of adolescents in the present study. This simple self-administered scale assessed the physical fitness of the participants in a short time. Adolescents should be able to answer easy questions about their physical fitness. This instrument is composed of five questions: OPF, cardiorespiratory fitness, muscular strength, speed/agility and flexibility. However, we only focused on the OPF with the intention of knowing the perception of adolescent students in this study. The possible Likert-scale answers ranged from “very poor” (1) to “very good” (5), and the questions always invited the participants to compare the self-reported physical fitness with the physical fitness of other friends. Cohen´s kappa coefficient of test-retest in this one question showed a significant value (p < 0.001). The reliability of the IFIS was highly significant (α = between 0.74 and 0.82) [36] and the internal consistency ranged from 0.58 (cardiorespiratory fitness) to 0.65 (OPF) [7].

All the participants were given specific information about the study (the main aim, the expected duration of the questionnaires’ interview and the procedures). In addition, participants’ parents and those responsible for the secondary school center were informed about the nature and objective of the study: body composition and psychometric variable measurement, anonymity of all responses, and non-identification of adolescent student participants. All adolescents of the present study were given two days to complete all of the measurement protocol during physical education classes. The first day, they had to complete the anthropometric measurements in order of the class list. A day after, they filled in the questionnaires related to physical self-perception (PSPP) and self-reported OPF. The instruments measuring the different variables were administered in the classroom by the researchers themselves without the teacher present. Researchers told the participants that they should be sincere with the answers of questionnaires distributed. Teachers had the possibility to obtain the results if they asked about them.
The participants of the present study were selected through the responsible secondary school and physical education teacher, who read and signed an informed consent statement before taking part in the study. The participants’ parents obtained information about the main aims of the investigation, based on the document approved by the Bioethics Committee of the University of Granada (563/CEIH/2018), and an informed consent form was signed by them. All adolescent participants in this study were treated according to the American Psychological Association (APA) guidelines with the purpose of ensuring the anonymity of the students’ responses.

The normal distribution of data was analyzed using the Kolmogorov–Smirnov test. Variables studied in the present research showed a non-parametric distribution. The mean and standard deviation of the participant´s clinical characteristics (gender, BMI status, age, body weight, and body height), PSPP subdomains (physical condition, attractive body, sport competence, physical strength, and self-confidence) and self-reported OPF by IFIS were performed on student participants of the present study.
The comparison in clinical characteristics, PSPP subdomains and physical fitness categories by IFIS between boys and girls (gender) were performed by the Mann–Whitney U test; whereas the differences between clinical characteristics, PSPP subdomains, and OPF by IFIS between BMI status (underweight, normal weight and overweight/obese) were performed by the Kruskal–Wallis test. Pairwise comparisons were performed with Bonferroni’s adjustment. The magnitude of the differences in the diverse outcomes of gender and BMI status categories were calculated using the effect size [37].
The reliability assessment of the data on the five variables included in the multiple moderated mediation analysis (Figure 1) was performed by Cronbach’s alpha (α = 0.75).
The association between categorized variables (age and BMI status) and continuous variables (PSPP dimensions and OPF by IFIS) were analyzed by Spearman´s correlation coefficient. The correlation values for performance-based tests were interpreted as follows: weak or no relationship (r = 0 to 0.25), fair degree (0.25 to 0.50), and moderate-to-good (r = 0.50 to 0.75) [38].
A mediation analysis is understood as a mechanism where one mediating variable transmits the effect from an independent variable to a dependent variable, based on linear regression models. The reason not to include physical condition with the other four mediator variables is because the purpose of this PSPP subscale is similar than OPF and we have avoided an irregular consistency assessment in the mediation analysis. Moreover, it is important to highlight that OPF is a general subscale that encompasses the rest physical fitness subscales measured in the IFIS questionnaire. In order to assess whether the association between gender (independent variable) and OPF (dependent variable) was mediated by attractive body, sport competence, physical strength, self-confidence and BMI status, a multiple mediation analysis was fitted using bias-corrected bootstrapped mediation procedures [39]. Bootstrapping is a non-parametric resampling method which involves repeatedly extracting samples from the data by randomly sampling with replacement and estimating the indirect effect in each resampled data-set [40]. This multiple mediation analysis was performed using the PROCESS macro for SPSS (New York, USA), model 4 [39]. A bias corrected bootstrap based on 5000 bootstrap samples with confidence intervals (Cis, 95%) was used to test the statistical significance of the indirect and direct effects in the multiple mediation analysis. If there was not zero in the confidence intervals, the effect was considered to be significant. A statistical diagram of the indirect effect of X on Y through M and the direct effect of X on Y = c´ is shown in the hypothetical model of the Figure 1. Finally, physical condition (PSPP) was deleted from multiple mediation because OPF measures a similar subjective perception, and this fact could produce collinearity assumptions.
All statistical analyses were performed using the Statistical Package for Social Science (IBM SPSS Statistics for Windows 21.0. Armonk, NY, USA).

A special thanks to all participants in this study and the families. 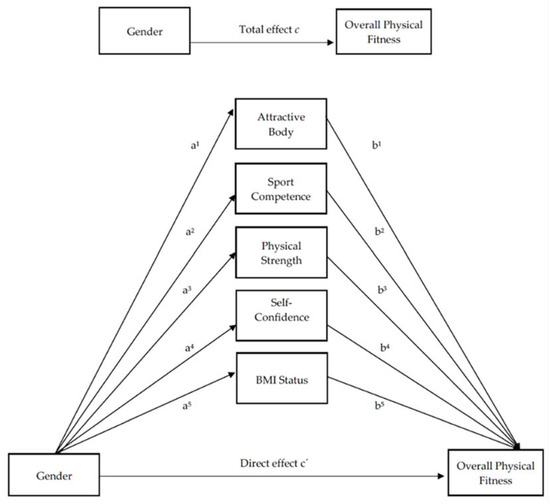 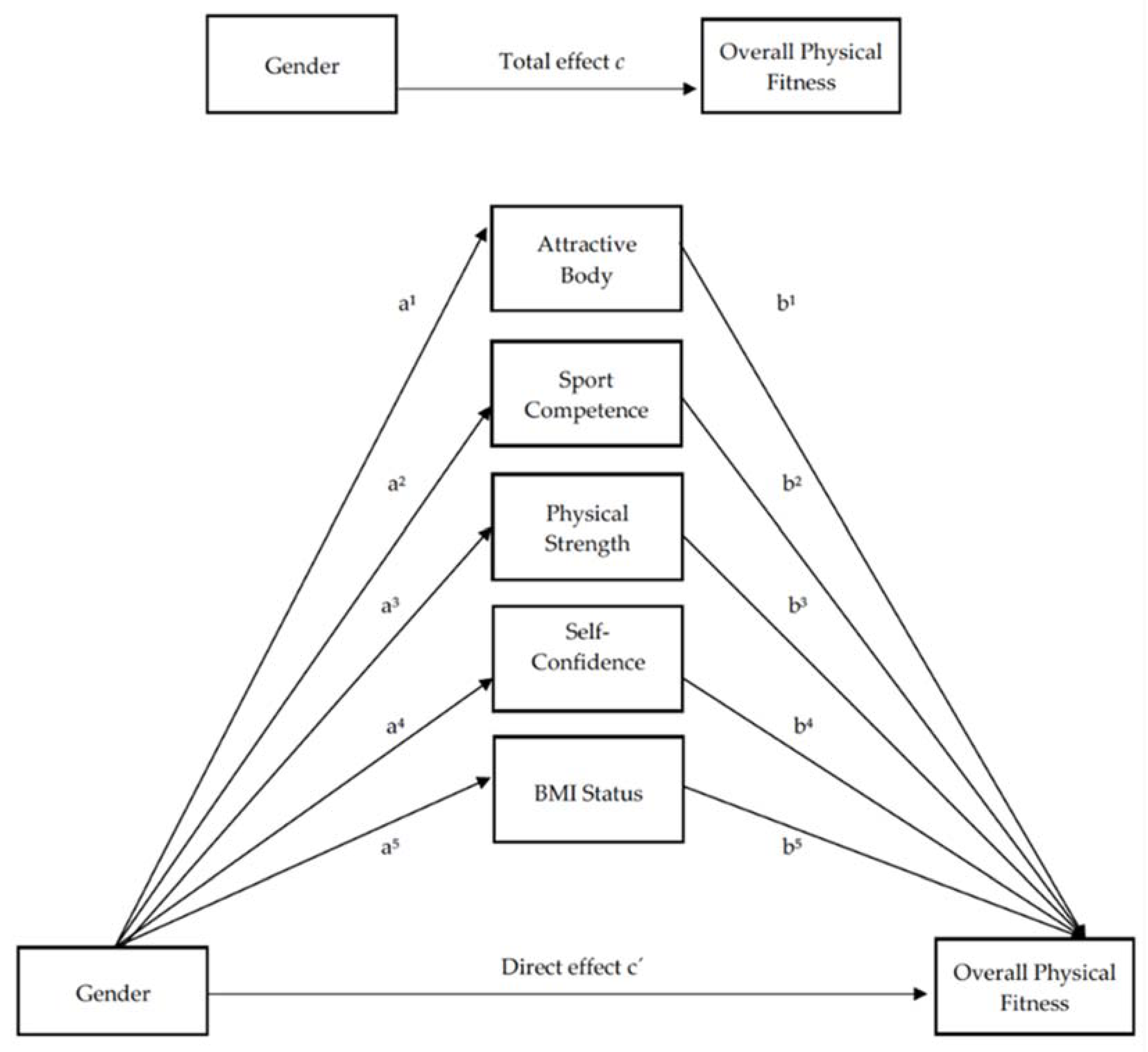