The Impacts of Air Pollution on Mental Health: Evidence from the Chinese University Students
Previous Article in Journal

Bibliometric Study of Technology and Occupational Health in Healthcare Sector: A Worldwide Trend to the Future
Previous Article in Special Issue

Resonance frequency analysis (RFA) requires abutment disconnection to monitor implant stability. To overcome this limitation, an experimental transepithelial abutment was designed to allow a SmartPeg to be screwed onto it, in order to determine the prototype abutments repeatability and reproducibility using Osstell ISQ and to assess whether implant length and diameter have an influence on the reliability of these measurements. RFA was conducted with a SmartPeg screwed directly into the implant and onto experimental abutments of different heights of 2, 3.5 and 5 mm. A total of 32 patients (116 implants) were tested. RFA measurements were taken twice for each group from mesial, distal, buccal and palatal/lingual surfaces. Mean values and SD were calculated and Intraclass Correlation Coefficients (ICC) (p < 0.05, IC 95%). The implant stability quotient (ISQ) mean values were 72.581 measured directly to implant and 72.899 (2 mm), 72.391 (3.5 mm) and 71.458 (5 mm) measured from the prototypes. ICC between measurements made directly to implant and through 2-, 3.5- and 5-mm abutments were 0.908, 0.919 and 0.939, respectively. RFA values registered through the experimental transepithelial abutments achieved a high reliability. Neither the implant length nor the diameter had any influence on the measurements’ reliability. View Full-Text
Keywords: implant stability; osseointegration; implantology; implant design implant stability; osseointegration; implantology; implant design
►▼ Show Figures 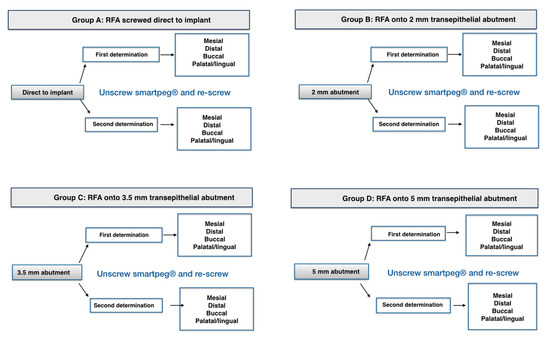