Can Multidisciplinary Inpatient and Outpatient Rehabilitation Provide Sufficient Prevention of Disability in Patients with a Brain Tumor?—A Case-Series Report of Two Programs and A Prospective, Observational Clinical Trial
Previous Article in Special Issue

Several studies have described a decreasing trend in amenable mortality, as well as the existence of socioeconomic inequalities that affect it. However, their evolution, particularly in small urban areas, has largely been overlooked. The aim of this study is to analyse the socioeconomic inequalities in amenable mortality in three cities of the Valencian Community, namely, Alicante, Castellon, and Valencia, as well as their evolution before and after the start of the economic crisis (2000–2007 and 2008–2015). The units of analysis have been the census tracts and a deprivation index has been calculated to classify them according to their level of socioeconomic deprivation. Deaths and population were also grouped by sex, age group, period, and five levels of deprivation. The specific rates by sex, age group, deprivation level, and period were calculated for the total number of deaths due to all causes and amenable mortality and Poisson regression models were adjusted in order to estimate the relative risk. This study confirms that the inequalities between areas of greater and lesser deprivation in both all-cause mortality and amenable mortality persisted along the two study periods in the three cities. It also shows that these inequalities appear with greater risk of death in the areas of greatest deprivation, although not uniformly. In general, the risks of death from all causes and amenable mortality have decreased significantly from one period to the other, although not in all the groups studied. The evolution of death risks from before the onset of the crisis to the period after presented, overall, a general pro-cyclical trend. However, there are population subgroups for which the trend was counter-cyclical. The use of the deprivation index has made it possible to identify specific geographical areas with vulnerable populations in all three cities and, at the same time, to identify the change in the level of deprivation (ascending or descending) of the geographical areas throughout the two periods. It is precisely these areas where more attention is needed in order to reduce inequalities. View Full-Text
Keywords: mortality; amenable mortality; socioeconomic factors; economic recession; small-area analysis; Spain mortality; amenable mortality; socioeconomic factors; economic recession; small-area analysis; Spain
►▼ Show Figures 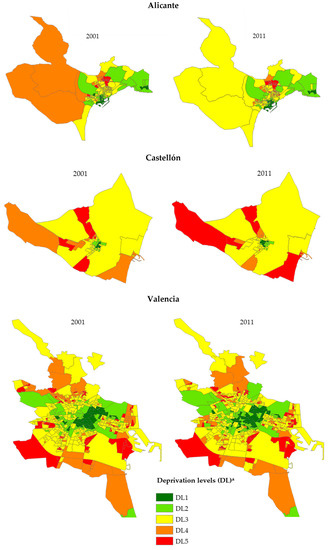