Background: Psychological factors of patients may influence physicians’ decisions on prescribing opioid analgesics. However, few studies have sought to identify these factors. The present study had a double objective: (1) To identify the individual factors that differentiate patients who had been prescribed opioids for the management of chronic back pain from those who had not been prescribed opioids and (2) to determine which factors make significant and independent contributions to the prediction of opioid prescribing. Methods: A total of 675 patients from four primary care centers were included in the sample. Variables included sex, age, pain intensity, depressive symptoms, pain catastrophizing, and pain acceptance. Results: Although no differences were found between men and women, participants with chronic noncancer pain who were prescribed opioids were older, reported higher levels of pain intensity and depressive symptoms, and reported lower levels of pain-acceptance. An independent association was found between pain intensity and depressive symptoms and opioid prescribing. Conclusions: The findings suggest that patient factors influence physicians’ decisions on prescribing opioids. It may be useful for primary care physicians to be aware of the potential of these factors to bias their treatment decisions.
Keywords: opioid prescriptions; pain acceptance; pain catastrophizing; depression; sex; chronic pain opioid prescriptions; pain acceptance; pain catastrophizing; depression; sex; chronic pain

The participants of this study had also been participating in an ongoing larger study designed to investigate the role of pain fear avoidance and pain acceptance in chronic pain adjustment (Project name: “Psychological variables involved in pain chronification” PSI2008-01803/PSIC; HUM-566, P07-SEJ-3067). The project was conducted in accordance with the Declaration of Helsinki and received ethical clearance by the Institutional Ethics Review Board (ERC UMA) and the Regional Hospital Ethics Committee. To date, two articles that have used data from this study have been published [44,58]. However, neither of these articles had the same objectives as the present study. The recruitment process lasted from May 2008 to January 2012. Individuals were considered eligible for inclusion if, at the moment of their participation in the study, they were experiencing back pain and had been experiencing pain for at least the last 3 months; they were not being treated for a malignancy, terminal illness, or psychiatric disorder; and they were able to understand the Spanish language. The physicians who participated in the study reviewed the patients’ clinical history. If the patients met the inclusion criteria, they were approached and invited to participate after completing the informed consent form. In total, 809 patients with back pain were invited to participate and 95 refused. The reasons for not participating were as follows: 15 patients did not reply to the phone calls; 63 stated they “had no time” for the assessment session; and 17 expressly refused participation. Of the patients initially contacted, 28 were excluded from the study because they did not meet the inclusion criteria or one of the exclusion criteria was present. Finally, 11 participants were also excluded because they gave us incomplete information. Thus, the final sample included 675 participants (see Figure 1). According to Austin and Steyerberg [59], a minimum subject-to-variable ratio of 5-to-1 in regression can produce stable and reasonably accurate estimates of the regression coefficients. Therefore, the sample size was excellent.

Each participant was given a semi-structured interview with a psychologist to collect demographic, social, and medical history information.

Patients were asked to rate their least, average, and worst pain during the past 2 weeks, as well as their current pain on a scale ranging from 0 to 10, with 0 indicating “No pain” and 10 indicating “Pain as intense as you could imagine.” A composite pain intensity score was calculated for each participant by calculating the average of these four ratings. Such composite scores have been shown to be very reliable measures of pain intensity in individuals with chronic pain [60]. In the present sample, internal consistency (Cronbach’s alpha) for the composite pain score was 0.84, indicating good reliability for this measure.

The depression subscale of the Spanish version of the Hospital Anxiety and Depression Scale was used to assess depressive symptoms. This is a self-reporting scale that contains two 7-item scales, one for anxiety and one for depression [61]. The internal consistency of the depression subscale has been shown to be high (α = 0.86) in other samples [62]. In the present sample, internal consistency was 0.91, indicating excellent reliability.

A Spanish adaptation of the 13-item Pain Catastrophizing Scale (PCS) was used to assess pain catastrophizing [40,63]. Using this scale, respondents are asked to rate how often they experience catastrophizing thoughts and feelings when in pain [40]. The PCS can be used to assess three catastrophizing subdomains (rumination, magnification, and helplessness) that are strongly associated with one another. It also provides a total score. In the present study, all analyses used the total score. The Spanish Version of the complete PCS has been shown to have excellent internal consistency (Cronbach’s alpha = 0.95) [64]. In the present sample, internal consistency was 0.97, indicating excellent reliability.

We used the Spanish version of the 20-item Chronic Pain Acceptance Questionnaire (CPAQ-SV) [65,66] to assess pain acceptance. The CPAQ-SV yields a total score and two subscale scores, assessing Pain Willingness and Activity Engagement. The subscales of the CPAQ-SV have been shown to have adequate to good internal consistency (Activity Engagement, α = 0.85; Pain Willingness, α = 0.75) and good criterion validity [65]. In the present study, we used the total score as the measure of pain acceptance. In the present sample, internal consistency was α = 0.76, indicating adequate reliability.

Descriptive statistics were computed for the sample and study variables. Continuous variables are expressed as the mean and standard deviations and categorical variables are expressed as numbers and rates. The chi-square test—for the categorical predictors—and t-tests—for the continuous predictors—were used to assess the hypothesized associations between the criterion variable of the study (i.e., whether or not the patient was prescribed opioids) and patient sex, age, patient-reported pain intensity, severity of depressive symptoms, pain catastrophizing, and acceptance. Cohen’s δ was also computed to assess the effect sizes of the associations. Values of Cohen’s δ between 0.20 and 0.50 indicate a small effect size, between 0.50 and 0.80 indicate a medium effect size, and more than 0.80 indicates a large effect size [67]. We examined the distributions of the study variables for normality using the Kolmogorov–Smirnov test to ensure that they met the assumptions for the planned regression analyses. To determine which predictors were independently associated with being prescribed opioids, we conducted a logistic regression analysis using opioid prescription (yes/no) as the criterion variable. In this analysis, all of the predictors were entered in a single step. Variables with p ≥ 0.05 were excluded from the equation. All data analyses were performed using the Statistical Package for the Social Sciences version 22.0 (SPSS; Chicago, IL, USA).

3.1. Frequency Data for the Demographic and Clinical Variables

3.2. Univariate Differences between Individuals Given and Not Given an Opioid Prescription

No statistically significant association was found between sex and opioid prescription (chi-square, p = 0.194).
Table 2 shows the results of the t-tests comparing differences between the two groups of participants. These results are shown by age, pain intensity, depressive symptoms, pain acceptance, and pain catastrophizing. As shown, significant effects were found for age (small effect), pain intensity (medium effect), depressive symptoms, and pain acceptance (small effects). However, no significant association was found between the two groups in pain catastrophizing.

3.3. Multivariate Associations between the Study Predictors and Differences in Opioid Prescribing

Pain catastrophizing was not included in the planned multivariate logistic regression analyses because no significant univariate association was found between this variable and differences in opioid prescribing (see Table 3). The logistic regression model was statistically significant (χ2 = 37.0101, p < 0.001) and explained 10% (Nagelkerke R2) of the variance in the criterion variable. The model correctly classified 87.3% of the cases. Pain intensity and depressive symptoms contributed significant unique variance to the prediction of the criterion variable.

We found significant univariate associations between patient age, pain intensity, and depressive symptoms and opioid prescribing for individuals with chronic back pain attending primary care centers. In multivariate analyses, pain intensity and depression alone contributed significant unique variance to the prediction of opioid prescribing. However, physicians should not base their decision to prescribe opioids only on the patients’ reported levels of pain severity. Moreover, given that lower levels of pain relief with opioids are reported by patients with chronic pain and co-morbid depression than by patients without depression, physicians should consider whether treatments other than opioid medication may be more appropriate for patients with depression. These findings highlight the relevance of screening for depression in patients presenting with chronic back pain.
Primary care physicians write a large percentage of all opioid prescriptions, but little is known about the characteristics of patients who receive them. The findings from the present study emphasize the relevance of understanding all the variables related to opioid prescribing in primary care centers, rather than simply relying on reported pain intensity. Knowledge regarding these variables would be useful for identifying individuals who are more likely to be prescribed opioids. This knowledge could then be used to develop training programs for physicians to help them identify the patients most likely to be prescribed opioids, even when these analgesics may not be appropriate.

This study was supported by grants from the Spanish Ministry of Science and Innovation (PSI2008-01803/PSIC) and the Regional Government of Andalusia (HUM-566, P07-SEJ-3067). 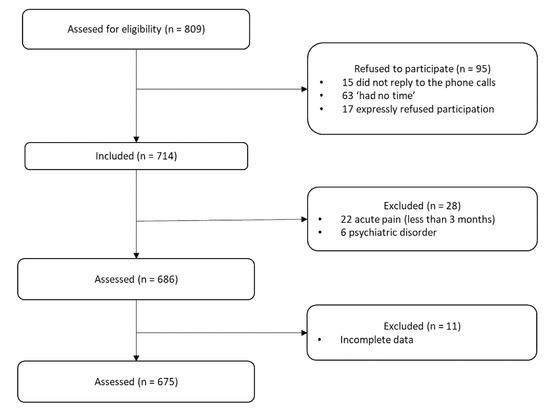 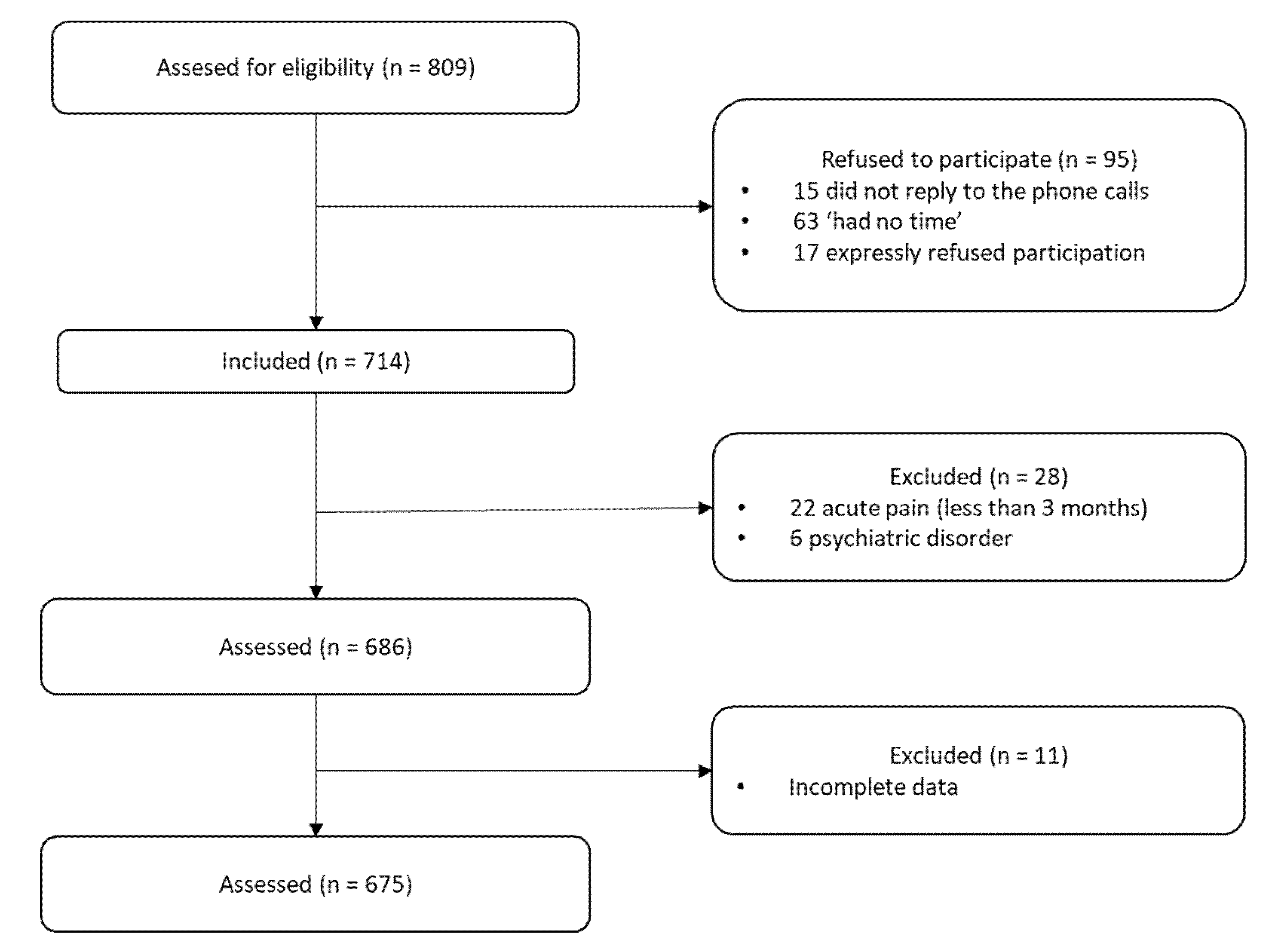