A Comparative Study of Participation in Physical Education Classes among 170,347 Adolescents from 54 Low-, Middle-, and High-Income Countries
Previous Article in Journal

Medication non-adherence is a concern in chronic disease management. Currently, there is no scale that characterizes sufficient non-adherent reasons for practical use in the Chinese population. This study developed and validated the Chinese version of the Medication Adherence Reasons Scale (ChMAR-Scale) and described non-adherence reasons in adult patients taking blood pressure medicine in Taiwan. A forward–backward procedure was used to translate the original MAR-Scale, and new items pertinent to cultural differences were added. Patients aged above 20 years old who were taking blood pressure medicine were recruited from a regional hospital and eight community pharmacies in the Taipei metropolitan area. Data analyses were conducted with IBM SPSS 19 (Armonk, NY, USA). Exploratory factor analysis revealed six domains, including belief, self-perception, forgetfulness, management, availability, and miscellaneous issues, with Cronbach’s alphas ranging from 0.649 to 0.852, item-total correlations ranging from 0.362 to 0.719, and factor loadings ranging from 0.365 to 0.775. Criterion-related validity with the visual analog scale and two global items were 0.525, 0.436, and 0.502. Forgetfulness, belief issues, and self-perception issues were the most common non-adherence reasons. In conclusion, the ChMAR-Scale showed good psychometric properties and identified more reasons for medication non-adherence than other existing scales. Healthcare providers should be vigilant of these problems while consulting patients. View Full-Text
Keywords: medication adherence; surveys and questionnaires; validation study; hypertension medication adherence; surveys and questionnaires; validation study; hypertension
►▼ Show Figures 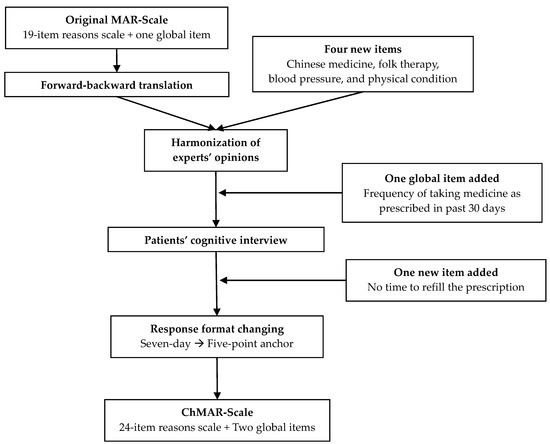