The Effectiveness of Individual or Group Physiotherapy in the Management of Sub-Acromial Impingement: A Randomised Controlled Trial and Health Economic Analysis
Next Article in Special Issue

Globally, diabetes mellitus is one of the most common metabolic disorders with a prevalence estimated to be 9.3% (463 million) and expected to rise to 10.9% (700 million) by 2045. The prevalence of impaired glucose tolerance is estimated to be 7.5% (374 million) in 2019 and is projected to reach 8.6% (548 millions) by 2045, with type 2 diabetes mellitus (T2DM) accounting for approximately 90% of that total [1]. In Thailand, the prevalence of T2DM is currently 9.9% of the adult population [2], higher than the global prevalence.
Many adults with T2DM experience a psychosocial burden and mental health problems associated with the disease [3]. The daily demands of people living with T2DM increase their risk of diabetes-related distress (DRD), a condition of stressful feelings associated with the challenges of managing diabetes and concerns related to diabetes complications [4].
DRD is a syndrome comprised of multidimensional components, including worry, conflict, frustration, and discouragement that can accompany living with diabetes [5]. The prevalence of DRD is reported to be 18–45%, with an incidence of 38–48% over 18 months [6]. High levels of diabetes distress can significantly impact medication adherence behavior and is linked to higher hemoglobin A1c (HbA1C) levels, lower self-efficacy, and poorer dietary and physical activity behaviors [7,8,9,10]. Previous studies have also reported that long-term DRD is associated with anxiety [11] and depression [12,13,14,15]. DRD has been shown to impact type 2 diabetes patients negatively through poor adherence to medication regimens and through reduced self-care [16,17]. A distinction has been drawn between DRD and depression, with research suggesting that DRD is more widespread [17]. The literature further suggests that DRD has a greater impact upon and is more closely associated with diabetes self-management and diabetes-related behavioral and biomedical outcomes than depression [8]. DRD is not a mental pathology or a common psychiatric disorder, which, when diagnosed, can be treated with medication [18]. Since DRD is linked to specific stressors, and much of diabetes distress is an expected reaction to a serious and chronic health-related stressor, it is viewed as part of the spectrum of diabetes, not as a separate clinical condition indicating psychopathology [17]. A primary goal is to reduce DRD in order to make it possible for patients to control their blood-sugar levels appropriately. However, to date no such programs have been developed for the management of DRD.
Cognitive behavior therapy (CBT) is a form of psychotherapy that can help reduce potentially detrimental emotions, behavior, and physiology physiological responses [19]. It is widely used to treat psychiatric disorders, psychological problems, medical problems with a psychological component, comorbid psychiatric disorders, difficulties in adjustment to illness, poor adherence to treatment and other illness-related behavioral problems [20]. CBT has been applied in diabetic patients with depression—e.g., Safren et al. [21] and Aguilera et al. [22]—including diabetic patients with DRD. Amsberg et al. [23] and Cummings et al. [24] report experimental studies of diabetic patients who could not control their blood-sugar level and who also had DRD found significant improvement in HbA1c levels and reduction of diabetes-related distress among the CBT intervention group compared with the control group. Similarly, Seyed et al. [25] conducted a quasi-experimental study of diabetic patients who could not control their blood-sugar levels and who had DRD. Their results indicated that CBT had significant effects on the amelioration of diabetes distress and on levels of HbA1c.
Although there is evidence that CBT can improve behavioral outcomes and may also improve HbA1c in patients with T2DM and DRD, including a number of studies using CBT in DRD therapy in patients with T2DM who could not control their blood-sugar levels, no such studies have been conducted in Thailand. The objective of this study was to develop and evaluate a Brief Group Cognitive Behavior Therapy (BG-CBT) program specifically aimed at reducing DRD, improving food consumption behavior, increasing physical activity, improving medication adherence, and controlling blood-sugar levels among Thai T2DM patients.

Participants were recruited from the DM clinic in Hang Dong Hospital, Chiang Mai Province, Thailand (Figure 1). Inclusion criteria were T2DM, age ≥ 18 years, HbA1c > 7, and DDS-17 score ≥ 2. Exclusion criteria were an established diagnosis of an advanced disease (e.g., advance heart failure, end stage renal disease, and metastatic cancer) or the presence of alcoholism, Alzheimer’s disease, dementia, cognitive impairment, a major psychiatric or communication disorder, and inability to communicate in the Thai language.
The study was comprised of 56 participants. The generally accepted standard for a quasi-experimental study is a minimum of 30 individuals with 20–25 participants for each independent variable [26]. Twenty-eight of the participants were randomly assigned to the experimental group, and the other 28 were assigned to the control group. The groups were matched for gender, age, DDS-17 score and HbA1c level.

The 6-session BG-CBT program was developed by the investigators and was based on Beck’s (2011) work [19]. Each weekly session was 60–90 min long. The program was reviewed by a panel of three CBT experts: one psychiatrist and two psychiatric nurses. The objectives of the first session included building relationships and understanding the connections between stimuli, thoughts, emotions, behavior, and physiology. The second session focused on identifying stimuli that promote inappropriate behavior and methods to modify that behavior including finding ways to manage stimuli. The third session attempted to identify inappropriate behavior affecting emotions, thoughts, and physiology, as well as the influence of external stimuli, including searching for methods to change inappropriate behavior. The forth focused on negative automatic thoughts. In the fifth, negative automatic thoughts to be improved or modified were selected. In the sixth and final session, knowledge and understanding of what had been learned was summarized, including systems for monitoring achievement of the mutually established goals.
Prior to leading the BG-CBT sessions, the therapist participated in a three-day brief cognitive behavioral group therapy intervention training program and also received approximately six hours of guidance by instructors of the Faculty of Nursing, Chiang Mai University, who are experts in CBT. The guidance included observation and postsession feedback, as well as case conferences. In addition, members of the research study team randomly observed the interventionist therapists during one or more of the sessions.

Diabetes-related distress (DRD) was evaluated using the Diabetes Distress Scale (DDS-17) developed by Polonsky et al. [27], which had been translated into the Thai language by Kattika [5]. The questionnaire, which has an alpha coefficient of 0.95, is composed of 17 items and measures four critical dimensions of distress: emotional burden, regimen distress, interpersonal distress, and physician distress. Each item dimension is rated on a 6-point scale from 1 (no problem) to 6 (serious problems). Each dimension is interpreted as the mean score of each subcomponent: ˂2 = little or no distress, 2–2.9 = moderate distress, and ≥3 a high level of distress.

Food Consumption Behavior, the survey of food consumption behavior questionnaire developed by the Bureau of Nutrition, Department of Health, Ministry of Public Health, Thailand was used to assess the food consumption behavior of the participants. The Cornbrash’s alpha coefficient of the questionnaire is 0.75. The participation in each of the 14 survey items is divided into 3 frequency levels: daily (5–7 days per week—5 points), occasional (1–4 days per week—3 points), and never (0 points). The maximum total score is 100 points (very good habits), 80–99 (good habits), 60–79 (moderately good habits), <60 points (food consumption habits need improvement).
Physical activity was assessed using the Global Physical Activity Questionnaire (GPAQ) Version 2, developed by Armstrong et al. [28] and translated into the Thai language by Vanida [29] The questionnaire, with an alpha coefficient of 0.77, is composed of 16 items divided into 4 groups: group 1—occupational activities (6 items); group 2—activities related to traveling from one place to another (3 items); group 3—activities to do during free time for relaxation, resting, or recreation (6 items); and group 4—sitting and lying down behavior measured in metabolic equivalents (METs) (1 item).
Medication taking behavior evaluation of medication adherence behavior was measured using the Thai language Medication Taking Behavior Scale (MTB-Thai) [30]. The alpha coefficient of the questionnaire was 0.76. The questionnaire covered 6 areas: (1) forgetting to take medicines, (2) not taking medicines at the times prescribed, (3) stopping medicines because of adverse drug reactions, (4) stopping medicines because of getting better, (5) stopping medicines for other reasons, and (6) adjusting dosage regimens. Each item was rated on a scale of 1 to 4, then the ratings were combined. Scoring was as follows: high drug adherence = 24, medium drug adherence = 22–23, and low drug adherence ≤ 21.
Blood hemoglobin A1C (HbA1c) level was measured by ion-exchange High-Performance Liquid Chromatography (HPLC) at the Hang Dong Hospital Laboratory, Chiang Mai Province, Thailand.

All participants provided written informed consent prior to participation in the study. The study protocol was approved by the Research Ethics Committee of the Faculty of Medicine, Chiang Mai University, Thailand (no. 357/2016).

BG-CBT is effective in reducing DRD, lowering HbA1c levels and improving food consumption behavior in Thai populations compared to standard treatment. The potential importance of the findings suggests that a larger-scale study be conducted, incorporating further methodological refinements, e.g., expanding the locations of sample collection, including a larger sample and conducting an extended follow-up assessment.

The Faculty of Medicine, Chiang Mai University provided funding for this study (Grant No. 050/2017). 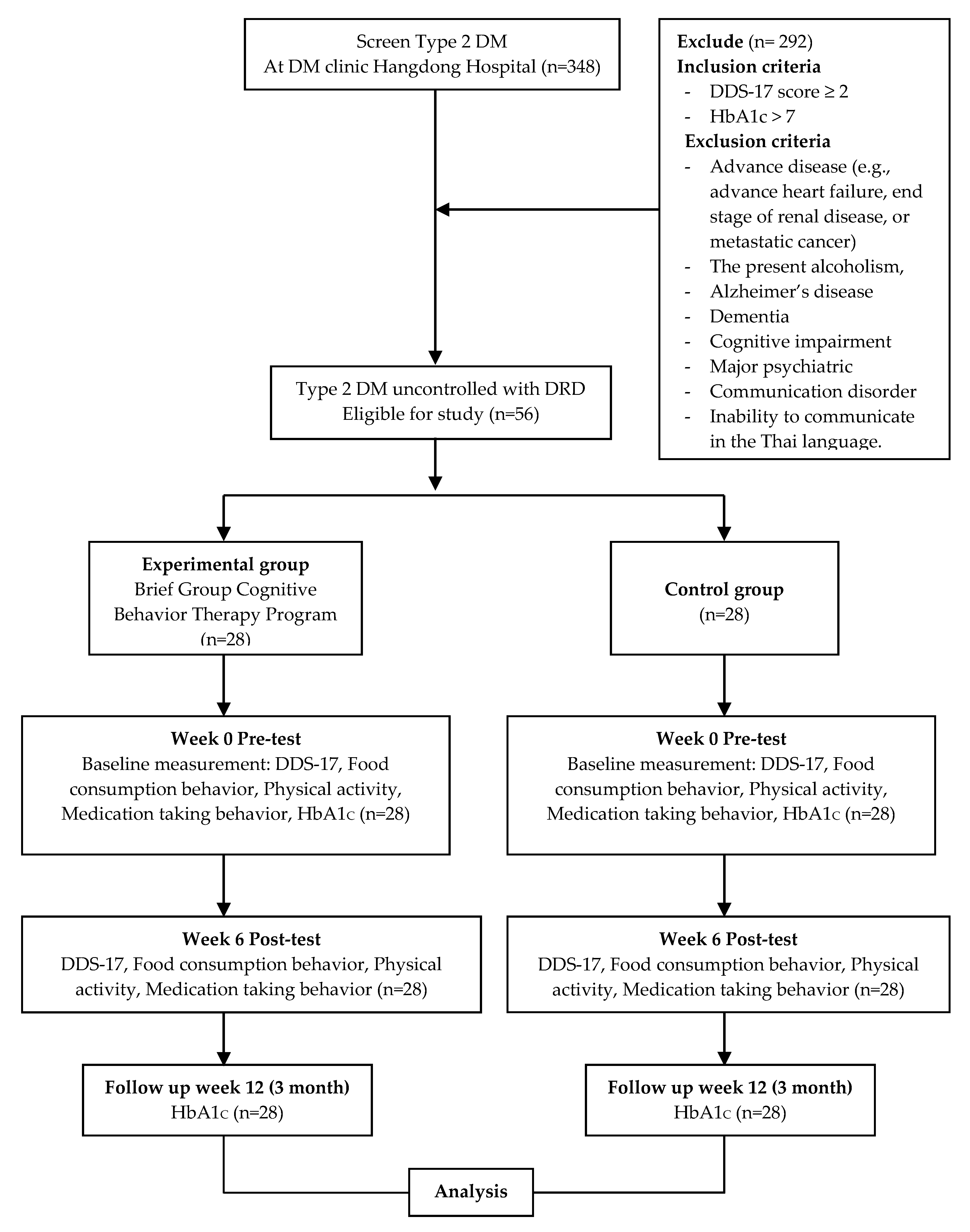