Treatment of Dysphagia in Parkinson’s Disease: A Systematic Review

Prevalence Rates of Loneliness and Its Impact on Lifestyle in the Healthy Population of Madrid, Spain

Background: The Spanish population presents higher levels of loneliness than citizens of countries in Northern Europe. Numerous studies have linked loneliness to increased morbidity and mortality, but very few studies have associated loneliness with healthy lifestyles. The objectives of this research are to identify the feeling of unwanted loneliness in various age and gender groups in the city of Alcalá de Henares (Madrid, Spain), to determine lifestyle habits in the areas of diet and physical exercise, and to examine the association between lifestyle habits and perceived loneliness. Methods: A cross-sectional, observational and analytical study on the perception of loneliness among men (59.06%) and women (60.06%) in a sample (n = 611) of the general population (N = 198,945), by means of random assignment of a health survey, was conducted. The data were collected using an ad hoc questionnaire. The data were stratified and analyzed with the IBM SSPS® v.25 software package. Results: The frequency of loneliness is stratified by sex and age, and healthy lifestyle habits in terms of diet and physical exercise are analyzed. Conclusions: People with perceived loneliness do not have worse lifestyle habits. However, women living with other people have a higher perception of loneliness than those living alone. Specifically, the perception of loneliness in young adult women could suggest a low level of moderate physical exercise. View Full-Text
Keywords: adult; exercise; lifestyle; loneliness; nutrition; observational study; young adult adult; exercise; lifestyle; loneliness; nutrition; observational study; young adult
►▼ Show Figures 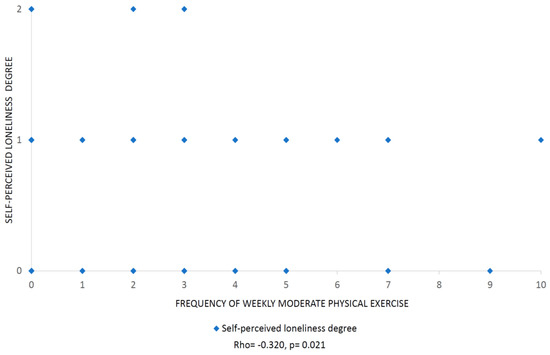