The management of cattle manure (CM) has become increasingly challenging because its production continues to rise, while the regulations on manure management have become increasingly stringent. In Korea, most farms produce CM as a dry mixture with lignocellulosic bedding materials (mainly sawdust), making it impractical to treat CM by anaerobic digestion. To address this problem, this study examined whether anaerobic co-digestion with food waste (FW) and pig manure (PM) could be an effective approach for the treatment of CM. The batch anaerobic digestion tests at different CM: FW: PM mixing ratios showed that more methane was produced as the FW fraction increased, and as the CM fraction decreased. The response surface models describing how the substrate mixing ratio affects the methane yield and synergistic effect (methane yield basis) were successfully generated. The models proved that the methane yield and synergistic effect respond differently to changes in the substrate mixing ratio. The maximum 30-day methane yield was predicted at 100% FW, whereas the maximum 30-day synergy index was estimated for the mixture of 47% CM, 6% FW, and 47% PM (total solids basis). The synergy index model showed that CM, FW, and PM could be co-digested without a substantial loss of their methane potential at any mixing ratio (30-day synergy index, 0.89–1.22), and that a possible antagonistic effect could be avoided by keeping the FW proportion less than 50%. The results suggest that co-digestion with PM and FW could be flexibly applied for the treatment and valorization of CM in existing anaerobic digestion plants treating FW and PM. View Full-Text
Keywords: anaerobic co-digestion; biochemical methane potential; cattle manure; response surface analysis; synergy index anaerobic co-digestion; biochemical methane potential; cattle manure; response surface analysis; synergy index
►▼ Show Figures 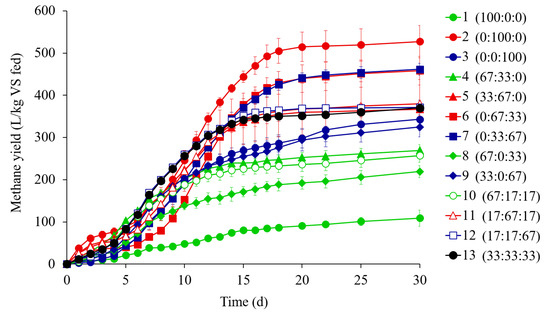