The Association between Noise Exposure and Metabolic Syndrome: A Longitudinal Cohort Study in Taiwan

The overarching approach of this study includes two parts: noise exposure estimation for each participant and determining the association between noise exposure and metabolic syndrome and its components (Figure 1). The details of the study participant description, noise mapping, and Cox regression model parameterization are described below.

This study was approved by the Institutional Review Board (IRB) of Biomedical Science Research, Academia Sinica (AS-IRB-BM 17044). This study was designed as a retrospective longitudinal cohort study. Each participant gave written consent prior to participation to authorize the use of data generated from the medical examination program. Personal identification was removed, and the data remained anonymous when released for research purposes.

The cohort was established by the Mei Jau (MJ) Health Management Institution, which is a private firm offering a comprehensive health screening program. A total of 67,635 MJ health screening participants were followed from 2003 to 2015. The following were the exclusion criteria for the participants: (1) no follow-up data available and (2) being diagnosed as having metabolic syndrome or its components at the baseline. The process for exclusion of participants is shown in Figure 2. A total of 42,509 participants were included for further analysis after excluding participants lacking follow-up visits. The participants were classified as having metabolic syndrome if they had three or more of the following five components: abdominal obesity, hypertension, low high-density lipoprotein, hypertriglyceridemia, and hyperglycemia.
According to the criteria of the Ministry of Health and Welfare, Taiwan, the criteria of metabolic syndrome for Taiwanese require three or more of the following measurements: (1) abdominal obesity: waist circumference >90 cm (35 inches) for men and >80 cm (31 inches) for women [45]; (2) hypertension: raised blood pressure (BP): systolic BP ≥ 130 mmHg or diastolic BP ≥ 85 mmHg or current use of antihypertensive drugs. Instead of applying the blood pressure data from the MJ database, this study used the long-term use of antihypertensive drugs as the proxy variable; (3) hyperglycemia: raised fasting plasma glucose (FPG): FPG ≥ 100 mg/dL or current use of antihyperglycemic drugs [46]; (4) hypertriglyceridemia: higher triglycerides (TG): TG ≥ 150 mg/dL or current use of antitriglyceride drugs; (5) lower high-density lipoprotein cholesterol (HDL-C): HDL-C <40 mg/dL for men and <50 mg/dL for women [47]. Participants were excluded if they had metabolic syndrome or its component at the baseline or if no follow-up data was available (Figure 2). Most participants lived in metropolitan areas (Figure S1).

To create the noise exposure map, this study used the participants’ noise perception as the input to perform spatial interpolation analysis. Data was collected by means of a questionnaire about the participants’ noise perception administered during MJ health screening in 2014 and 2015. Participants were asked to evaluate the degree of noise pollution within a radius of 1.5 km of their homes. Noise perception was the degree of annoyance (on a scale of 1–4, where 1: extremely serious, 2: serious, 3: not serious, and 4: not serious at all). The geostatistical Kriging approach was used to create a noise perception map. Ordinary Kriging is a linear geostatistical interpolation technique which has been used for sound level mapping (e.g., [48]). This study used ArcGIS (ArcMap, version 10.5; ESRI Inc., Redlands, CA, USA) with the extension of Spatial Analyst to perform Kriging analysis. Participants’ locations and the corresponding perceptions were used as the input for Kriging analysis. Root-mean-square error (RMSE) was used to evaluate the accuracy or best fit of the Kriging tool. This study chose the stable model as it had the lowest RMSE. Perceived noise is not directly comparable to measured noise. Categorized noise perception was compared with the measured noise for the model validation. Seasonal noise information was retrieved from 423 noise-monitoring stations maintained by the Taiwan Environmental Protection Administration in 2003–2015. This study excluded 164 stations where no MJ participants lived within 500 m of the noise stations. Noise data from the 259 stations was further aggregated in an annual fashion for the analyses. Mean measured noise for each noise station was calculated. The perceived noise of each noise measurement station was calculated by averaging the noise perceptions of participants within 500 m of the noise stations.

The Cox proportional hazards model was applied with the visiting date as the underlying time variable to estimate the hazard ratios for metabolic syndrome and its components under different noise exposure levels. The Cox proportional hazards model has been widely used in analysis of time-to-event data [49]. For metabolic syndrome and each of its components, a univariate model (noise perception as the single variable) and a multivariable model (adjusted for baseline age, body mass index (BMI), gender, and physical activity) were developed. The model was used to estimate hazard ratios (HRs) and their 95% CIs for evaluating the associations between noise exposure and metabolic syndrome. The hazard ratio is defined as the ratio of the risk of the event of interest (e.g., death) in one group to the risk of the event of interest in the other group occurring at a given interval of time [50]. The selection of covariates was done based on existing literature. All statistical analyses were performed using R 3.6.3 [51], and the model was fitted with the coxph function in the survival package.

Noise perception was estimated at each participant’s geocoded residential address. Perceived noise for each participant was categorized into high (perception < 1st quartile), medium (3rd quartile ≥ perception ≥ 1st quartile), and low (perception < 3rd quartile). The noise perception was only available in 2014 and 2015. Therefore, this study assumed the spatial distribution of perception was consistent from 2003 to 2015 based on a cross-check of real noise measurements. Body mass index (BMI) was stratified into underweight (BMI < 18.5), normal (18.5 ≤ BMI ≤ 24), and overweight (BMI > 24) [52]. Age was stratified into 0–39, 40–59, and ≥60 years. Physical activity was assessed by a questionnaire at every visit. Participants were asked to report their weekly physical activity under four intensity categories: light (e.g., walking), moderate (e.g., playing basketball), medium vigorous (e.g., jogging), and high vigorous (e.g., running). A metabolic equivalent (MET) value (1 MET ≥ 1 kcal/hour/kg) was assigned to each intensity category as follows: 2.5 METs for light, 4.5 METs for moderate, 6.5 METs for medium vigorous, and 8.5 METs for high vigorous. A total of 7.5 MET-h/wk is required for health benefits, and twice that level, 15.0 MET-h/wk, for additional benefits [53]. A total of 7.5 MET-hours/week is required to achieve the minimum level of the WHO-recommended leisure time physical activity [54]. The participants were classified into one of the following categories using the cut-points of 3.75 MET-hours/week (half of the recommended level) and 7.5 MET-hours/week (recommended level) [55].

The estimated perceived noise map is shown in Figure S2. The Kriging model was evaluated using cross-validated estimators of root-mean-square error (RMSE). The RMSE is 0.57. The perceived noise was slightly higher (mean: 3.17; standard deviation: 0.26; scale of 1–4 where 1 is extremely serious, 2 is serious, 3 is not serious, and 4 is not serious at all) in the major metropolitan areas (Taipei, Taoyuan, Hsinchu, Taichung, Chiayi, Tainan, and Kaohsiung) than the perceived noise (mean: 3.29; standard deviation: 0.25) in rural areas. Kriging-interpolated prediction surface standard error shows that metropolitan areas, where most health screening participants were located (Figure S1), had lower standard error than rural areas (Figure S3). This suggests the perceived noise estimation is reliable for our analysis. Figure 3 shows the mean noise perception of participants within 500 m of the noise stations versus the mean measured noise of noise stations. In general, participants perceived higher noise when measured noise was higher.

3.2. Baseline Characteristics of the Study Participants

Baseline characteristics of the study population are shown in Table 1. At baseline, the gender ratio is close to 1:1 except for the cohort of hyperglycemia (male: 42.1%; female: 57.9%). The average age of the participants in each sub-group was approximately 40 years. The average body mass index (BMI) was 21–23. The metabolic equivalent (MET) was approximately 8 hrs/wk. The estimated noise perception was approximately 3 (not serious).

This research was supported by a grant titled “Multidisciplinary Health Cloud Research Program: Technology Development and Application of Big Health Data” from Academia Sinica and a sustainability project titled “Sensing the noise in urban areas and evaluating its potential health impact” (AS-SS-109-02) from Academia Sinica.

The authors declare no conflict of interest. The funders had no role in the design of the study, in the collection, analyses, or interpretation of data, in the writing of the manuscript, or in the decision to publish the results. 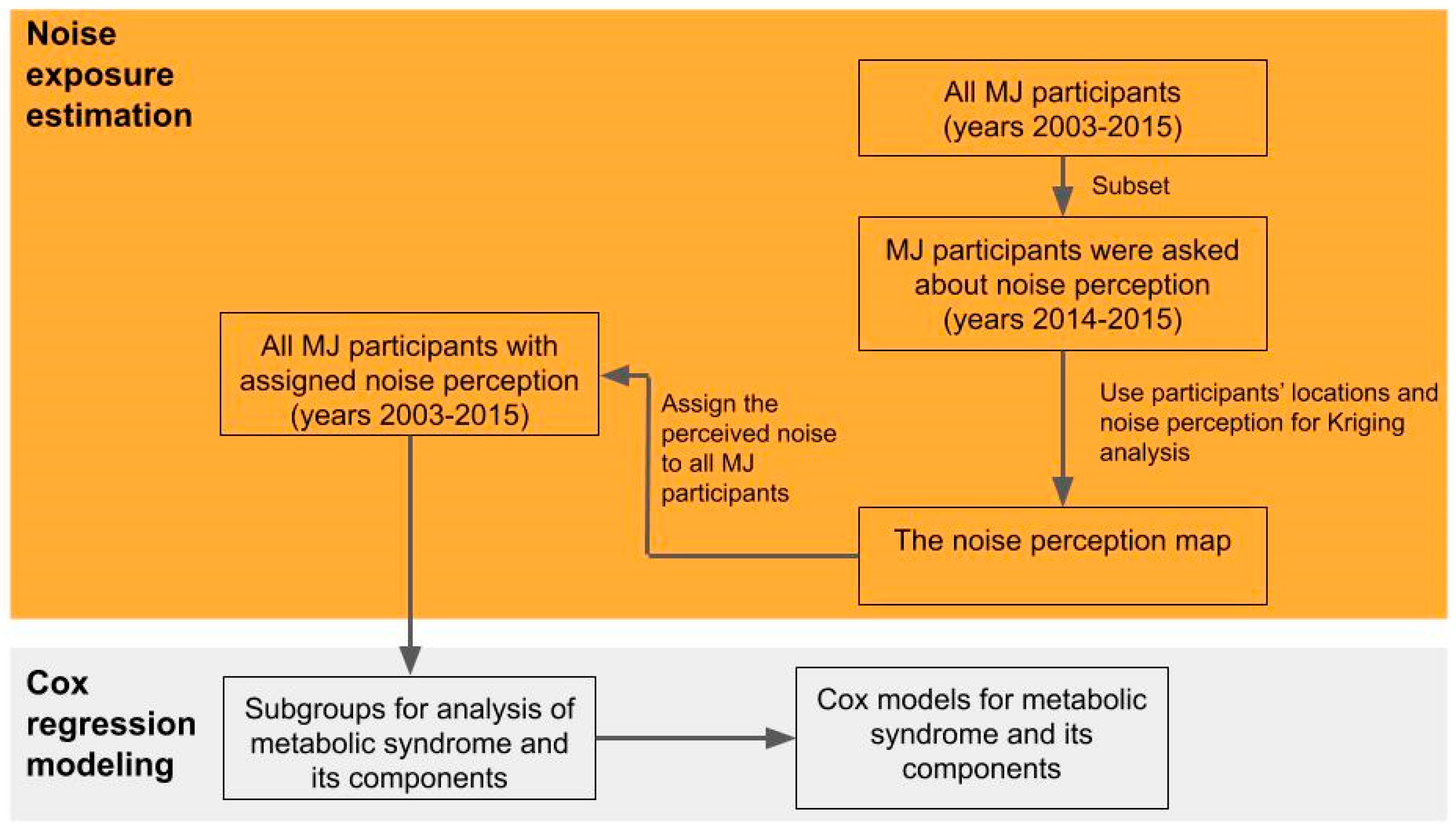 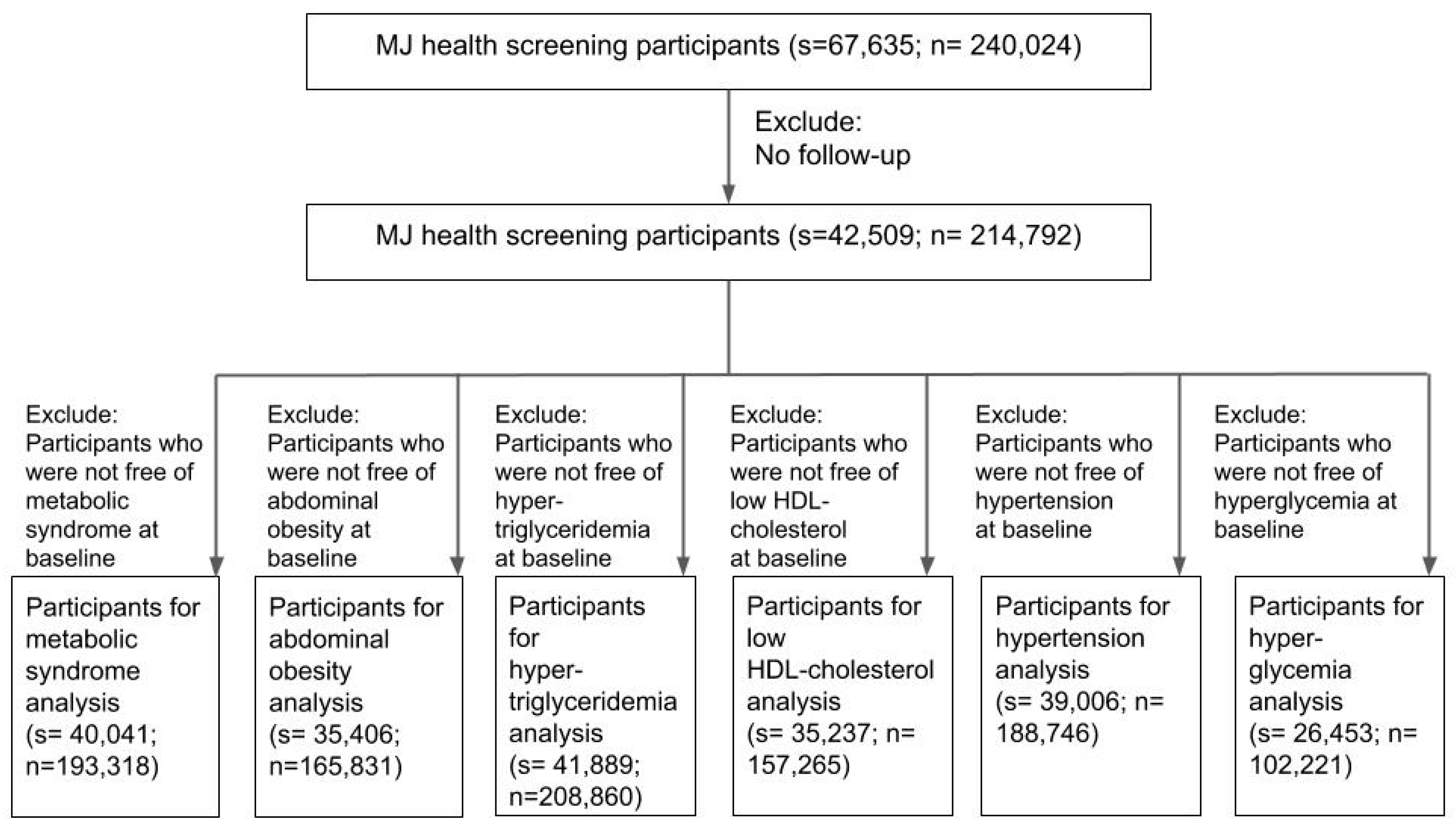