The Food and Nutrition Environment at Secondary Schools in the Eastern Cape, South Africa as Reported by Learners
Next Article in Special Issue

Variations of Workload Indices Prior to Injuries: A Study in Trail Runners

The purpose of this study was to compare the variations of weekly workload indices of internal and external load measures across the three weeks prior to injury occurrences in trail runners. Twenty-five trail runners (age: 36.23 ± 8.30 years old; body mass: 67.24 ± 5.97 kg; height: 172.12 ± 5.12 cm) were monitored daily for 52 weeks using global positioning systems (GPSs) to determine the total distance covered. Additionally, a rate of perceived exertion (RPE) scale was applied to determine session-RPE (sRPE: RPE multiplied by training time). The accumulated load (AL), acute: chronic workload ratio (ACWR), training monotony (TM), and training strain (TS) indices were calculated weekly for each runner. During the period of analysis, the injury occurrences were recorded. The differences were observed in AL and ACWR for sRPE and training time were significantly greater during the injury week when compared to the previous weeks. Similar evidence was found in TM and TS indices for sRPE, training time, and total distance. Furthermore, no meaningful differences were observed in AL and ACWR for total distance in the weeks prior to injury occurrence. Nevertheless, significant between-subjects variability was found, and this should be carefully considered. For that reason, an individualized analysis of the workload dynamics is recommended, avoiding greater spikes in load by aiming to keep a progressive increment of load without consequences for injury risk.
Keywords: load monitoring; fitness; performance; endurance sports load monitoring; fitness; performance; endurance sports

The sample consisted of 25 male trail running athletes (age: 36.23 ± 8.30 years old; height: 172.12 ± 5.12 cm; body mass: 67.24 ± 5.97 kg) participating in the Portuguese trail running championships during the 2018/2019 season, and with minimum ranking ITRA (International Trail Running Association) performance index of 600, with this score based on the mean of the five best race scores by a runner in the last 36 months, on a scale of 1000 points.
For 52 weeks, athletes were monitored daily using global positioning systems (GPSs) to collect data related to horizontal displacements (distance and duration), and the rate of perceived exertion (RPE) was considered to determine the session-RPE. All athletes reported data of training sessions, defined by the athlete or a trainer. The inclusion criteria were (i) participation in the national trail running championships, (ii) more than three years of experience in the sport, (iii) registration of all training sessions, and (iv) not being injured for more than three consecutive weeks in the last 12 months. Before the study began, all athletes were informed of the objectives, procedures, and protocol of the study, and they voluntarily signed an informed consent. The study was carried out following the Helsinki Declaration’s ethical recommendations for studies in humans.

2.2. Experimental Approach to the Problem

This study followed a cohort study design. Data from 148.12 ± 57.53 training sessions were collected for each athlete regarding the training load (training time, RPE session (sRPE), and distance covered), as well as the occurrence of injuries, their typology, and loss time. Periodically (every four months), the athletes’ anthropometric data were also recorded. In all training sessions, GPSs were used to collect data related to external load. Weekly, the acute load indices (sum of weekly training load), acute: chronic workload ratio, training monotony, and training strain were calculated for each measure (i.e., sRPE, distance covered, and session duration). Training weeks were defined as starting on Monday and ending on Sunday. Concerning the injuries recorded, a total of 38 injuries with downtimes were recorded and classified according to severity (1 to 3 days, 4 to 7 days, and 8 to 21 days). From the included injuries, 20 were in grade 1, 8 in grade 2 and 10 in grade 3 [50].
Considering the objective of the study and identifying the occurrence of injuries, the three weeks prior to each injury occurrence were defined, with the training load indices being compared between the three weeks prior to the injury. The weeks were classified as follows: (i) injury week (week in that the injury occurred), (ii) week-1 (week of training prior to injury week), (iii) week-2 (two weeks prior to injury week), and (iv) week-3 (three weeks prior to injury week).

Through an online form, for all training sessions, the athletes were asked about possible injury episodes. Thus, in injury episodes, information such as the mechanism, typology, and location of the injury, as well as loss time, was collected to enable an assertive analysis of the severity of the injury and to verify the relationship between the workload indexes and the injury. The athletes were instructed on how to fill out the questionnaire, familiarized, and followed-up by a researcher who recorded the data whenever they occurred. Only musculoskeletal and sprain injuries were considered to impede athletes’ practice; in the case of dermatological injuries, these do not impede practice but only cause limitations. Thirteen athletes contracted injuries, resulting in 38 injuries and categorized according to type (five were dermatological and 33 were musculoskeletal). Of all the injuries, 25 prevented practice for 1–3 days, ten prevented practice for 4–7 days, and three prevented practice for 8–21 days.

In all training sessions, watches with GPS technology were used to collect data on horizontal displacements (distance and duration). Each athlete wore a Polar V800 watch (37 × 56 × 12.7 mm, weight: 79 g) with integrated GPS (Polar, Finland). The watch was tested for validity in previous studies and acceptable values of accuracy were verified [51]. The total distance covered per session was recorded by each athlete.

The rate of perceived exertion was monitored using the Borg CR-10 scale [52], which was used to collect the athletes’ subjective perceptions of effort through the question, "How hard was the training session?" with 1 corresponding to very light activity intensity and 10 representing maximal exertion [29]. This scale was introduced to the athletes two weeks before the beginning of the study so they could familiarize themselves with it, thus making their responses more precise. This procedure was performed 30 minutes after the end of each training session, ensuring that it was performed individually. In addition, the athlete provided information for any segment that influenced the classification (more difficult or easier) [29,53]. Session-RPE was determined based on the RPE values provided by the athletes and the duration of the training session (in minutes), and was expressed in arbitrary units (A.U.) [29]. This procedure was performed daily during all training sessions, as it is a valid measure for quantifying internal load [53].

Based on the sRPE values, training time, and distance covered, the following indices were calculated: (i) weekly training load (sum of all training loads for the week), (ii) acute: chronic workload ratio (ACWR: calculated by dividing the acute load (current week’s training load) by the chronic workload (average of the previous four weeks’ workload) [35], (iii) training monotony (average of workload) of the last seven days divided by the standard deviation of the last seven days’ workload) [39], and (iv) training strain (monotony multiplied by workload) [39]. In particular, the ACWR used the history of training load or players prior to each week included (to have the correct analysis considering their training load). For example, the ACWR in week-3 was calculated based on the weeks -3, -4, -5, and -6, despite weeks -4, -5, and -6 not being presented in this particular study.

The results are presented in the form of means and standard deviations. The data were preliminarily checked for normality (p > 0.05) and homogeneity (p > 0.05). After confirming both assumptions, a repeated measures ANOVA was conducted to compare the workload indices (acute load, ACWR, training monotony, and training strain) of the three measures (sRPE, total distance, and total time) between four weeks (three weeks prior to injury and the injury week itself). Bonferroni’s post hoc test was used to analyze the pairwise variations (week vs. week analysis). These statistical procedures were performed using SPSS statistical analysis software (version 24, IBM Corporation, Armonk, NY, USA). The level of statistical significance was set at p < 0.05. Additionally, the standardized effect size (ES) of Cohen’s d was calculated for pairwise comparisons to determine the ES. The magnitude of ES was described based on the following thresholds: ≤0.2, from 0.3 to 0.6, from 0.6 to 1.2, from 1.2 to 2.0, and >2.0 were considered trivial, small, moderate, large, and very large, respectively.

There were significant weekly increases in acute load, acute: chronic workload ratio, training monotony, and training strain for sRPE, total distance, and training time in the weeks prior to an injury’s occurrence. The variations in the weekly load demonstrate a drop in the workloads for the external and internal measures from week-3 to week-2, which was followed by increases from week-2 until the injury week. A similar trend was observed for training strain and training monotony—after an abrupt fall in the first week, progressive increases were recorded until the injury week. The values obtained for the acute: chronic workload ratios for total distance, training time, and sRPE ranged from 0.7 to 1.3 A.U.; these values are considered as being within the “sweet spot,” however, and due to the high intrasubject variation with high proportions for some athletes (large SD), the acute: chronic workload ratios values in the case of trail runners may be masked, suggesting the “sweet spot” for trail runners may be different.
These results suggest that athletes and coaches should pay special attention to the periodization of training and the monitoring of workloads, avoiding high monotony, and allowing changes in loads that induce adaptation to the stimulus. Therefore, the acute loads must increase progressively and consider both chronic load and moderator variables to prevent significant increases in the injury risk. 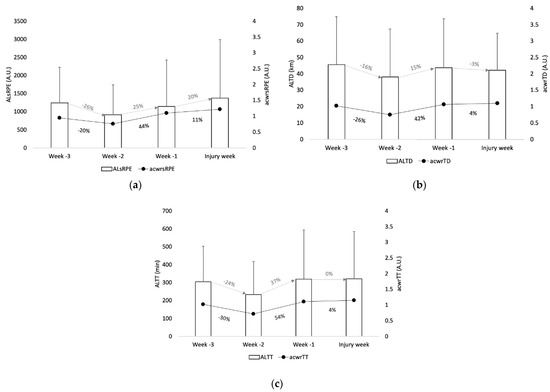 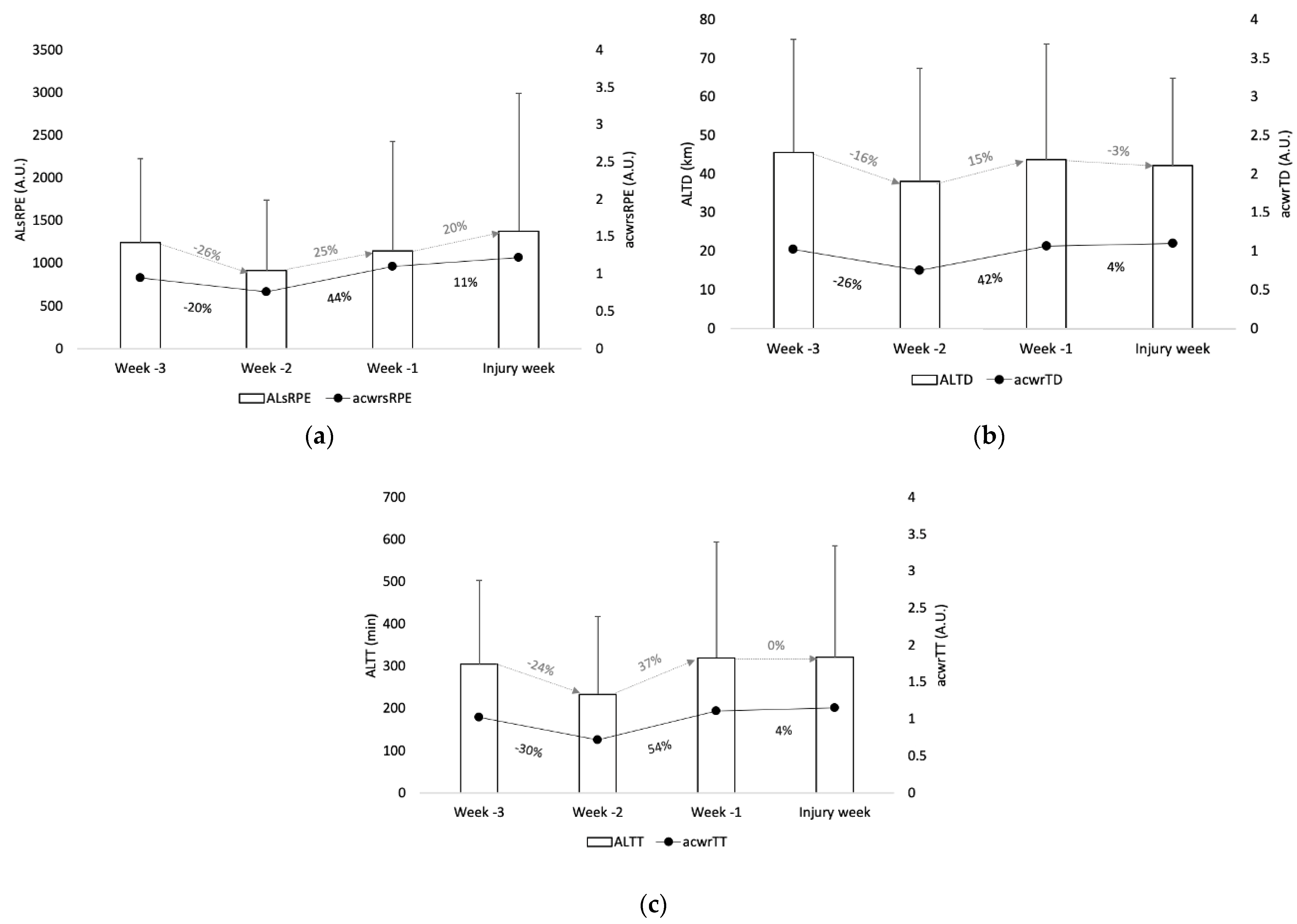 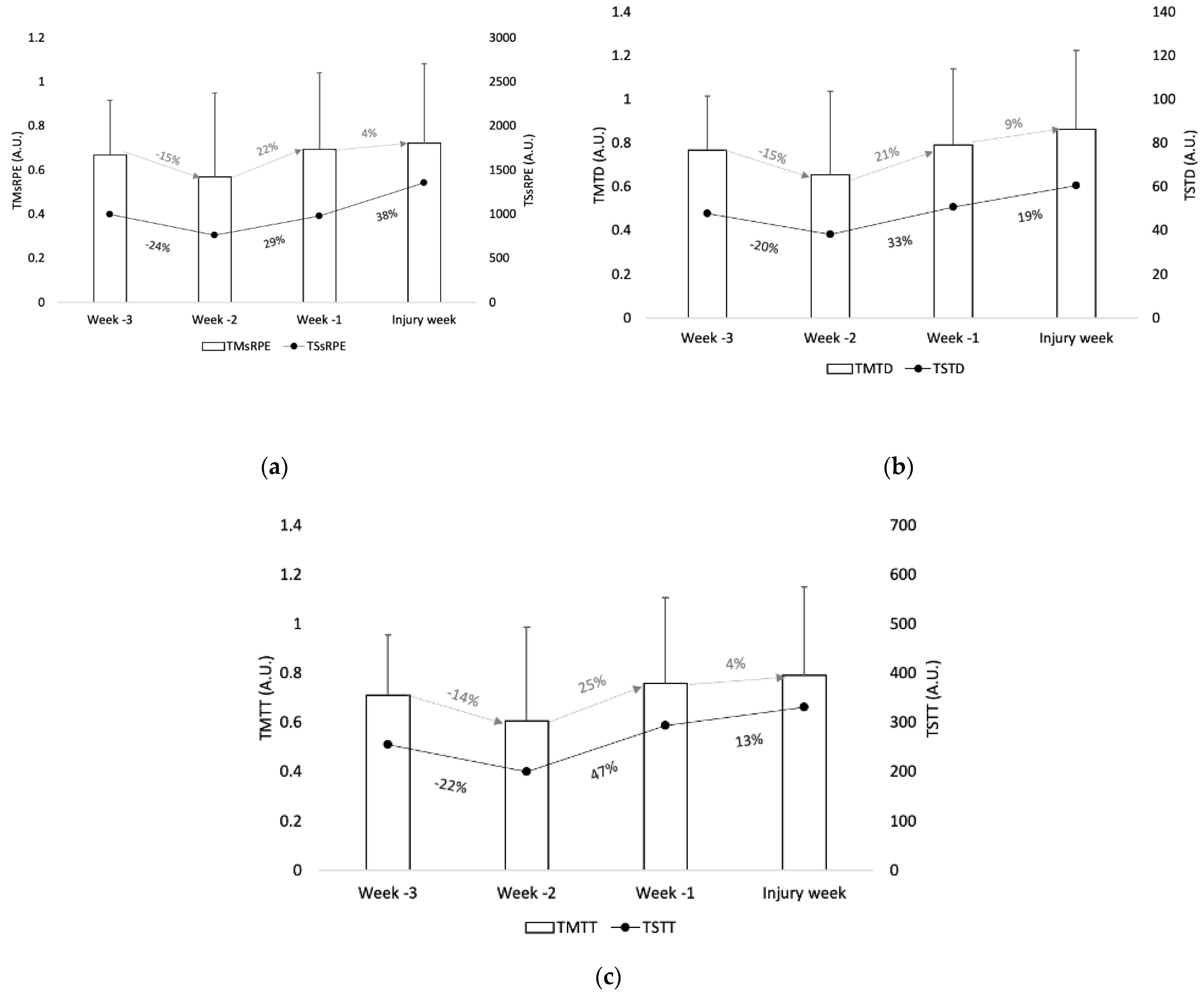