Staphylococcus saprophyticus is a uropathogenic bacteria responsible for acute urinary tract infections (UTIs) mainly in young female patients. Patients suffering from urinary catheterization, pregnant patients, the elderly as well as those with nosocomial UTIs are at greater risk of the colonizing S. saprophyticus infection. The causative factors include benign prostatic hyperplasia, indwelling catheter, neurogenic bladder, pregnancy, and history of frequent UTIs. Recent findings have exhibited that S. saprophyticus is resistant to several antimicrobial agents. Moreover, there is a global concern regarding the increasing level of antimicrobial resistance, which leads to treatment failure and reduced effectiveness of broad-spectrum antimicrobials. Therefore, a novel approach is being utilized to combat resistant microbes since the past few years. Subtractive proteome analysis has been performed with the entire proteome of S. saprophyticus strain American Type Culture Collection (ATCC) 15305 using several bioinformatics servers and software. The proteins that were non-homologous to humans and bacteria were identified for metabolic pathway analysis. Only four cytoplasmic proteins were found possessing the potential of novel drug target candidates. The development of innovative therapeutic agents by targeting the inhibition of any essential proteins may disrupt the metabolic pathways specific to the pathogen, thus causing destruction as well as eradication of the pathogen from a particular host. The identified targets can facilitate in designing novel and potent drugs against S. saprophyticus strain ATCC 15305. View Full-Text
Keywords: subtractive proteomics; drug targets identification; bioinformatics; Staphylococcus saprophyticus subtractive proteomics; drug targets identification; bioinformatics; Staphylococcus saprophyticus
►▼ Show Figures 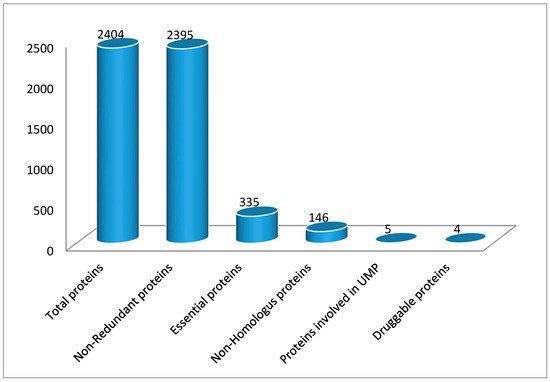