The Perceived Availability of Online Social Support: Exploring the Contributions of Illness and Rural Identities in Adults with Chronic Respiratory Illness
Previous Article in Journal

During the last two decades, social media has immersed itself into all facets of our personal and professional lives. The healthcare sector is no exception, with public health departments now capitalizing on the benefits that social media offers when delivering healthcare education and communication with citizens. Provincial Health Committees (PHCs) in China have begun to adopt the micro-video sharing platform, Tik Tok, to engage with local residents and communicate health-related information. This study investigates the status quo of official Tik Tok accounts managed by PHCs in mainland China. In total, 31 PHC accounts were analyzed during August 2019, while the top 100 most liked micro-videos were examined using content analysis. Coding included three major aspects: Quantified Impact, Video Content, and Video Form. 45.2% (n = 14) of PHCs had official Tik Tok accounts. A limited number of accounts (n = 2) were yet to upload a micro-video, while most (n = 9) had uploaded their first micro-video during 2019. For the top 100 most liked micro-videos, a sharp difference was observed in terms of number of Likes, Comments and Reposts. Videos containing cartoons or documentary-style content were most frequently watched by citizens. Similarly, content that promoted professional health or provided knowledge of diseases was frequently viewed. Content containing original music, formal mandarin language, subtitles, and which lasted less than 60 s, were most frequently followed. It is considered a missed opportunity that most PHCs struggle to take advantage of the Tik Tok platform, especially given its growing popularity and daily increase in account creation. View Full-Text
Keywords: micro-video; Provincial Health Committee; healthcare; Tik Tok; social media; China micro-video; Provincial Health Committee; healthcare; Tik Tok; social media; China
►▼ Show Figures 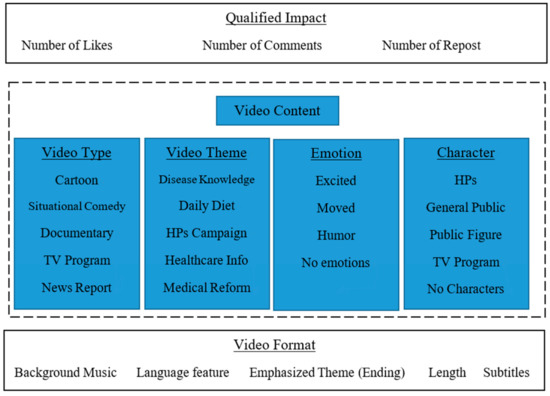