Relationship between Physical Activity, Screen Time, and Sleep Quantity and Quality in US Adolescents Aged 16–19
Previous Article in Special Issue

The Health Risks of Electronic Cigarette Use to Bystanders

This works aimed to assess the health risks of e-cigarette use to bystanders. The exhaled breath of 17 volunteers was collected while they were vaping, and the levels of nicotine, propylene glycol, glycerol, formaldehyde, acetaldehyde, acrolein, tobacco-specific nitrosamines (TSNAs), and heavy metals were analyzed. Increased levels of nicotine, propylene glycol, TSNAs and copper were found in the exhaled breath of the volunteers. From these measurements, bystander exposure was estimated for two different scenarios: (1) A non-ventilated car with two e-cigarette users and (2) a ventilated office with one e-cigarette user. Our results show that bystanders may experience irritation of the respiratory tract as a result of exposure to propylene glycol and glycerol. Systemic effects of nicotine should also be expected if nicotine-containing e-liquid is used, including palpitations, and an increase of the systolic blood pressure. Furthermore, due to the presence of TSNAs in some e-liquids, an increased risk of tumors could not be excluded for the ‘car’ scenario. While e-cigarette use can clearly have effects on the health of bystanders, the risks depend on the rate of ventilation, dimensions of the room, and vaping behavior of the e-cigarette user. The presence of TSNAs in e-liquids can be avoided, which will prevent the most serious effect identified (increased risk of tumors). View Full-Text
Keywords: electronic cigarettes; bystanders; health risks; second hand vaping electronic cigarettes; bystanders; health risks; second hand vaping
►▼ Show Figures 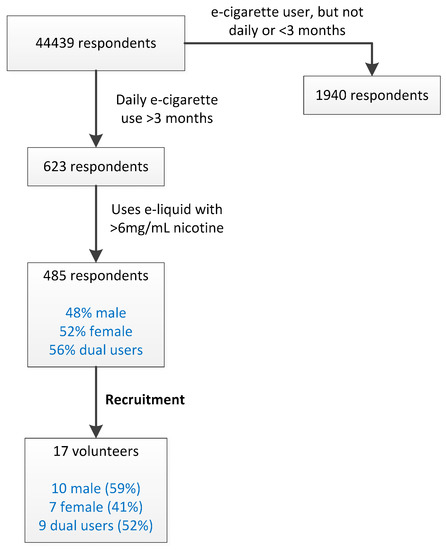