Modifiable Individual Factors Associated with Breastfeeding: A Cohort Study in China
Next Article in Special Issue

The Contribution of Fluoride to the Pathogenesis of Eye Diseases: Molecular Mechanisms and Implications for Public Health
Previous Article in Journal

The aim of this study was to investigate soil contamination with trace elements and fluoride at sites in Szczecin (NW Poland) where economic activity was historically associated with the use of trace metals. As the Polish legislation does not recognize the lasting impact of historical pollution on soils, land developers are not obliged to determine soil pollution in the new residential areas, including parks and playgrounds for children. Therefore, in this study, at the locations of defunct metalwork enterprises (smithies, foundries, chemical plants, and small metal production plants), which were closed down after World War II, we determined lead (Pb), chromium (Cr), copper (Cu), zinc (Zn), iron (Fe), manganese (Mn), nickel (Ni), mercury (Hg), cadmium (Cd), and cobalt (Co) levels in the soil. In addition, we also determined fluoride (F) levels due to the contemporary fluoride pollution in the area generated by a large chemical plant with a post-production phosphogypsum waste landfill and a power plant complex. Our results show that soil at the sites of now-defunct smithies can still act as a significant source of trace metals. Pb concentration in the surface (0–20 cm) and subsurface (20–40 cm) layers exceeded concentration thresholds for soils with first-degree pollution. The concentrations of Zn and Cu also exceeded their natural background limits. Furthermore, our research indicates an increased concentration of fluoride in surface layers of the soil; however, not exceeding the fluoride content threshold. These observations have important consequences for public health and safety because, presently, the studied sites function as housing estates and other public facilities. Therefore, contaminated soil at these sites may pose a threat to the health of local residents and should be closely monitored for trace metal contamination levels. View Full-Text
Keywords: trace metals; fluorides; urban soil pollution; historical industry trace metals; fluorides; urban soil pollution; historical industry
►▼ Show Figures 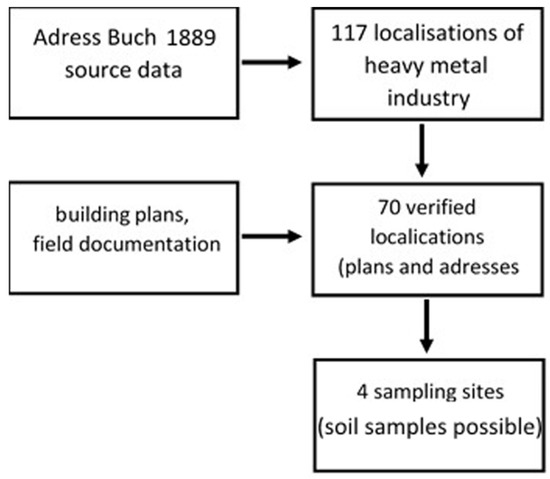