“Back to the Future”: Time for a Renaissance of Public Health Engineering
Previous Article in Journal

Roadside Exposure and Inflammation Biomarkers among a Cohort of Traffic Police in Kathmandu, Nepal

As the most significant solid residue generated in the oil production industry, upstream oily sludge was regarded as hazardous waste in China due to its toxicity and ignitability, and to date, the incineration process has been considered the most efficient method in practice. Due to the complicated components of oily sludge, a kinetic model of the incineration process was difficult to build, and is still absent in engineering use. In this study, multiple non-isothermal thermogravimetric analysis (TGA) and differential scanning calorimetry (DSC) analysis were applied for the kinetic analysis of upstream oily sludge in air conditions. A viewpoint regarding the rules to sectionalize the reaction stages was raised, and a differential integral method to obtain the incineration kinetic model was provided. The results showed that four stages that were divided based on the weight-loss regions in the TGA curves and the endothermic/exothermic sections in the DSC curves were suitable to obtain an incineration kinetic model of oily sludge. The integral method was beneficial for obtaining the average activation energy of each stage, and the differential method was suitable for gaining the nth-order reaction rate equation and the pre-exponential factor before the operating temperature became lower than 635.968 °C. The average activation energies of stages one, two, three, and four were 60.87 KJ/mol, 78.11 KJ/mol, 98.82 KJ/mol, and 15.96 KJ/mol, respectively. The nth-order reaction rate equations and pre-exponential factors of stages one, two, and three were 0.82, 3.50, and 2.50, and , , and , respectively. View Full-Text
Keywords: oily sludge; incineration; kinetic; modeling; differential/integral method oily sludge; incineration; kinetic; modeling; differential/integral method
►▼ Show Figures 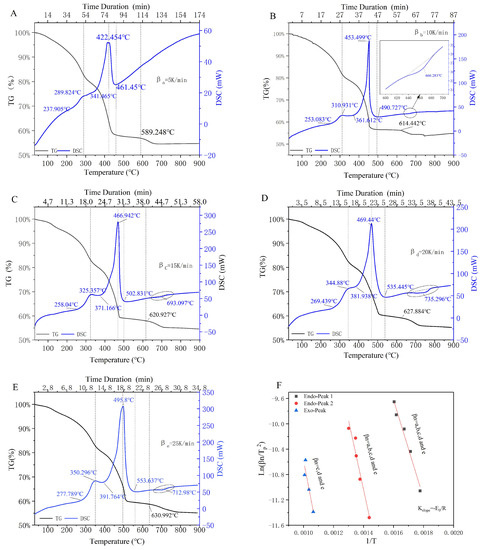