The study sample (N = 302,683) was generated by pooling four cycles (Cycle 3.1 [2005], 2007–2008, 2009–2010, and 2011–2012) of the Canadian Community Health Survey (CCHS). The CCHS is a nationally representative series of cross-sectional surveys structured to collect information annually on a variety of issues relating to health including health status, health care utilization, and health determinants [30]. The target population, sampling procedure, and sample sizes are all determined by Statistics Canada. The CCHS is divided by health region and reflects estimates according to health region and province/territories, as well as the Canadian population as a whole. The CCHS collects data from a randomly selected person within a household aged 12 or older residing in a dwelling in the ten provinces and three territories. Individuals living on reserves or Crown land, in institutions, in remote regions, or who are members of the Armed Forces are not included in the survey. The CCHS data sample represents approximately 98% of the Canadian population aged 12 years or older [30]. It is important to note that the survey only captures biological sex, and not gender per se.
The CCHS questions are designed for computer-assisted interviewing with pre-programmed questions, content flow, and allowable responses (ranges or answers). Half of the interviews take place by telephone, while the other half take place in person. Participation in the CCHS is voluntary and responses are kept strictly confidential [30].
Given the difference in sample sizes between the four cycles, the existing survey weights (determined by Statistics Canada) were adjusted depending on their contribution to their total pooled sample sized. Once the individual cycles’ sample weights were adjusted, the cycles were combined and the pooled dataset was treated as one sample from a single population with a sample size of N = 515,421 prior to exclusions.

The population of interest in this study is working-age Canadian adults, aged 18–64 years, living in the ten provinces. Children aged 12–17 years were excluded from the dataset as mental health concerns differ in youth from adulthood, as do experiences of food insecurity in food insecure households [31]. Respondents aged 65 and older were excluded because seniors have the lowest levels of household food insecurity of the adult demographic in Canada, likely related to receiving seniors’ pensions [32]. They also report different mental health problems including more cognitive impairment than working-age adults [33]. In addition, because of challenges of food supply related to isolated geographic areas such as Canada’s Northern Territories [34], only respondents from the 10 provinces were included.
Provincial participation in the CCHS is dependent on whether modules of the survey were considered core or optional content in each survey cycle; the measurement of household food insecurity via the Household Food Insecurity Survey Module (HFSSM) was optional in the CCHS 3.1; for that cycle, Newfoundland, Labrador, New Brunswick, Manitoba, and Saskatchewan declined participation [35]. In the 2009–2010 cycle, Prince Edward Island and New Brunswick declined participation in the HFSSM [36]. Pooling four cycles and bootstrapping circumvents problems related to generalizability of the results to the ten provinces, given a substantial sample size was still collected in each of the provinces. Given its importance to the research question, only households who provided a response to the HFSSM were included. After applying exclusions, the total sample size was N = 302,683.

Five common mental health outcomes collected in the CCHS were included in the analysis: depressive thoughts in the past month, anxiety disorders, mood disorders, mental health status, and suicidal thoughts in the past year. All five outcomes were self-reported, because of the nature of the survey, but respondents were asked to only respond affirmatively to the anxiety and mood disorder questions if they had been so diagnosed by a health professional. These mental health conditions were selected based on their high response rates and their relatively high prevalence rates in Canada. The module including some mental health variables was optional content; as a result, two of the outcomes used in this study (suicidal thoughts, depressive thoughts) were not asked in all provinces. A detailed description of the five mental health outcome variables is presented in Appendix B.

Six demographic variables (age, sex, household composition, homeownership, and highest education level in household) were included as covariates and were assessed for effect modification or confounding on the relationship between household food insecurity and adverse mental health outcomes. In addition, variables that measure respondents’ race (White, Asian, Indigenous, Other), immigration status (immigrated less than 10 years ago, immigrated 10 or more years ago, Canadian-born), main income source (wages, government assistance, other sources), and inflation-adjusted household income (low income, medium-high income) were also included in the analysis. These covariates were included because of their known association with increased levels of household food insecurity [12,16,17,20,39]. Referent groups were selected based on the lowest prevalence of household food insecurity.
Finally, a cycle variable (2005, 2007/2008, 2009/2010, 2011/2012) was included to determine whether macro-level economic events, such as the 2008–2009 recession in Canada, modified or confounded the relationship between household food insecurity and adverse mental health outcomes.

The CCHS does not survey some groups that are particularly vulnerable to household food insecurity and mental health problems, specifically First Nations people living on-reserve, homeless populations, and those living in remote regions [47,48]. Researchers estimate that there could be as many as 470,000 additional food insecure people living in Canada that are not included in Statistics Canada’s estimate [49]. We cannot assume that the social location of household food insecurity for men and women in these circumstances is the same as the CCHS sample.
While it would be preferable to speak only in terms of gender, the CCHS only delineates by sex and, therefore, sex is used as a variable of interest in this study. Given the self-reported nature of the CCHS, there is potential for measurement error in the mental health outcomes, particularly as a result of social desirability bias—this would result in an underestimation of mental health burden.
The CCHS uses two methods of data collection—computer assisted telephone interviewing (CATI) and computer-assisted person interviewing (CAPI). While there is some evidence in the literature of statistically equal prevalence of self-reported mental health status using CATI and CAPI [50], face-to-face interviewing yields slightly higher reporting of household food insecurity than CATI [51]. This may result in an underestimation of household food insecurity for those responding using CATI.
Finally, type 1 error (the probability of rejecting a null hypothesis that is in fact true [52]) is a threat with a large sample size. In order to circumvent this problem, a bootstrapping method was employed, which effectively narrowed the confidence intervals to increase the difficulty of rejecting the null hypothesis.

This study was funded by a Programmatic Grant in Health and Health Equity from the Canadian Institutes of Health Research (CIHR) (grant no. FRN 115208) and a CIHR graduate student award.

The authors thank and acknowledge the assistance of the staff at the Prairie Regional Data Centre for their advice and guidance. 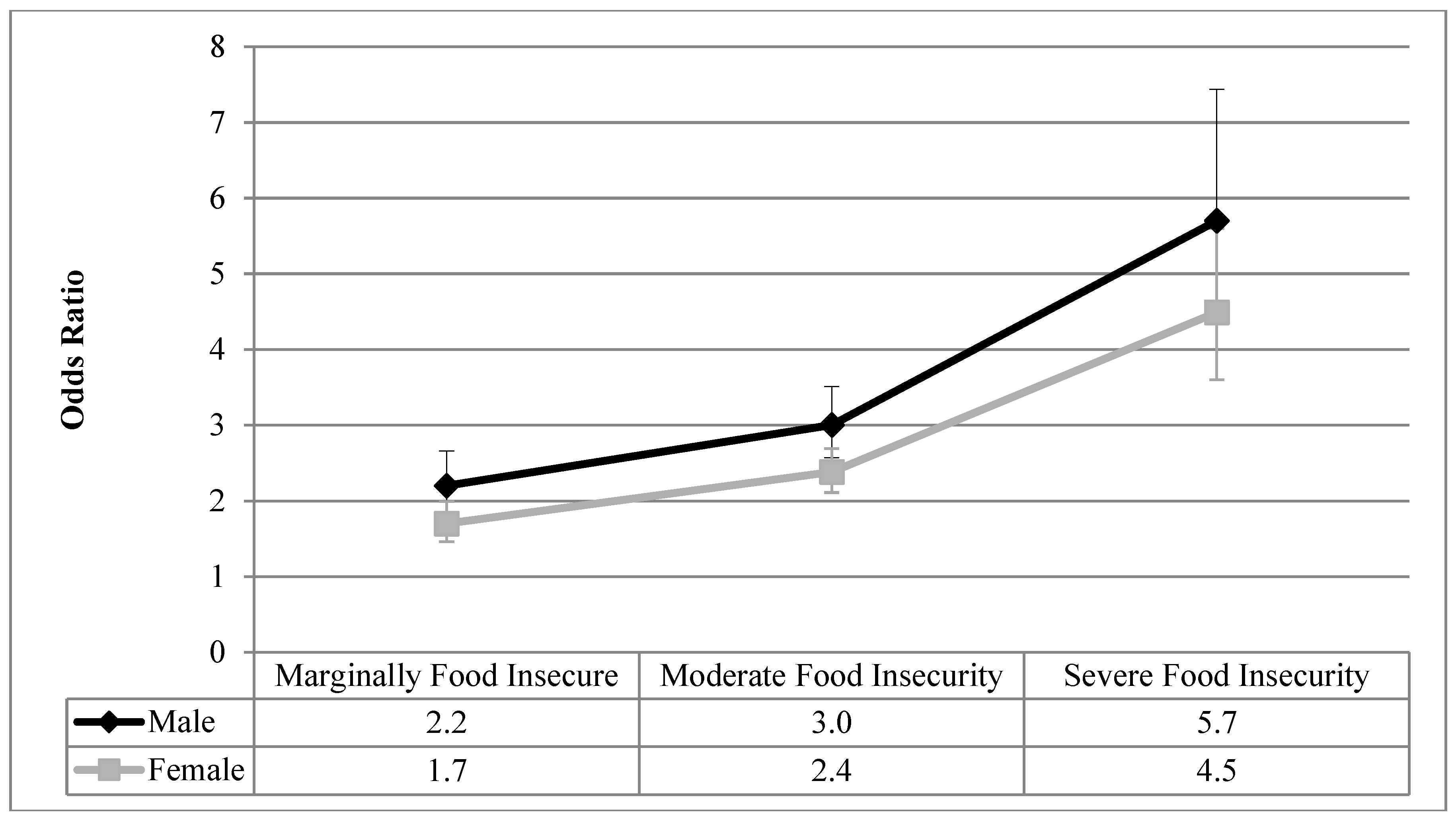 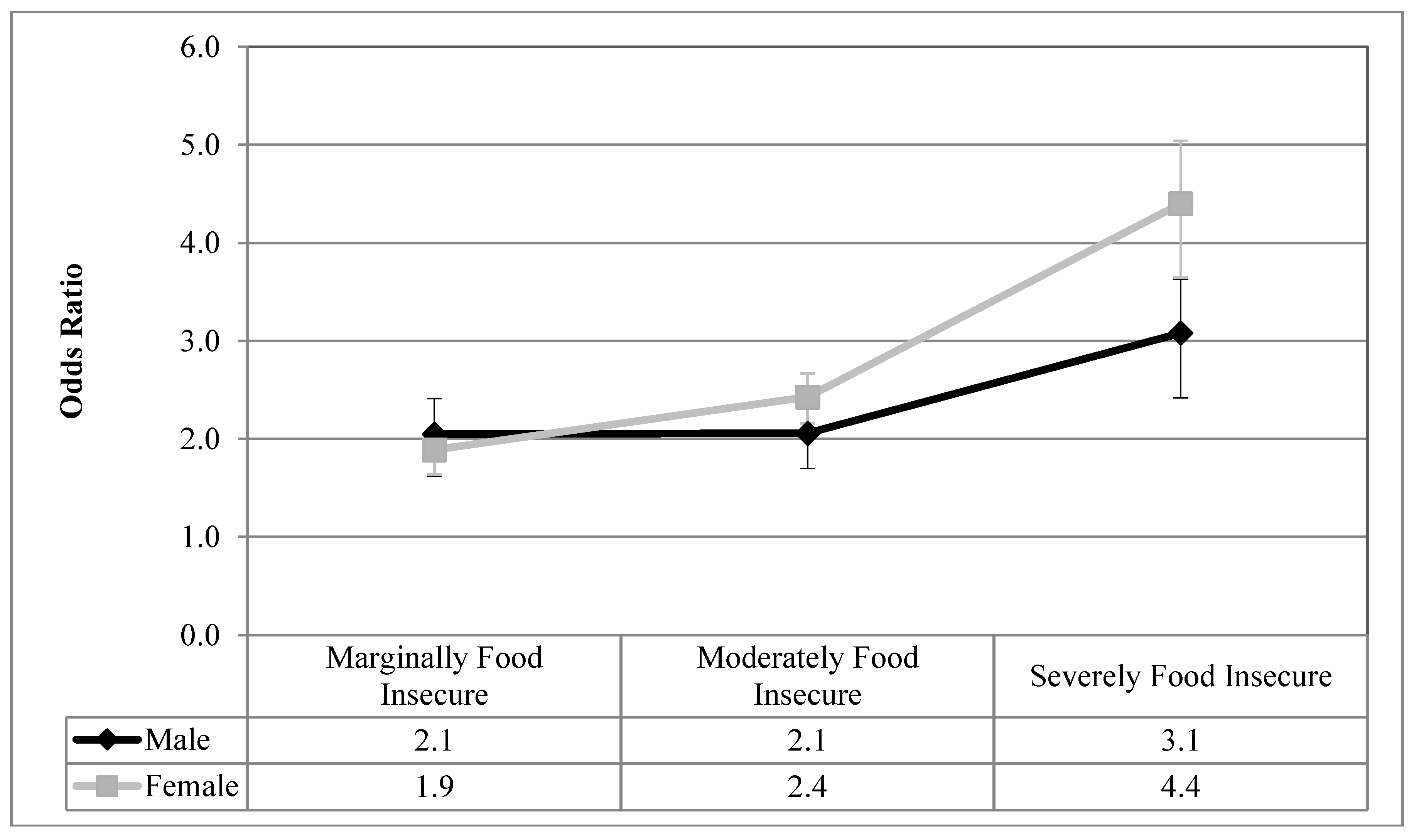 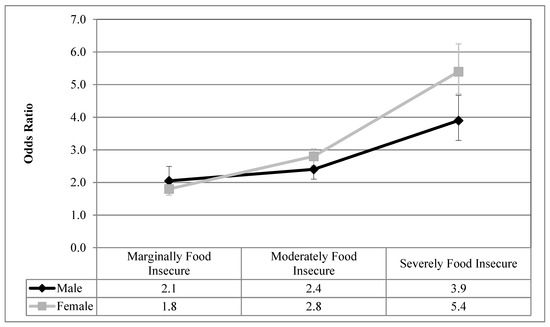 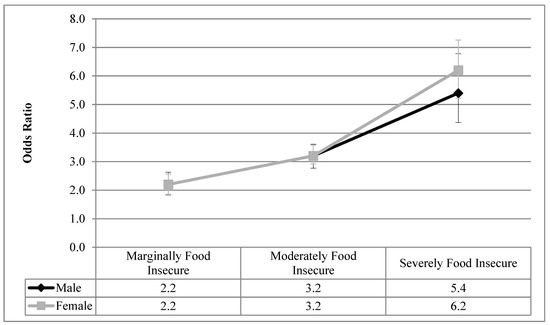 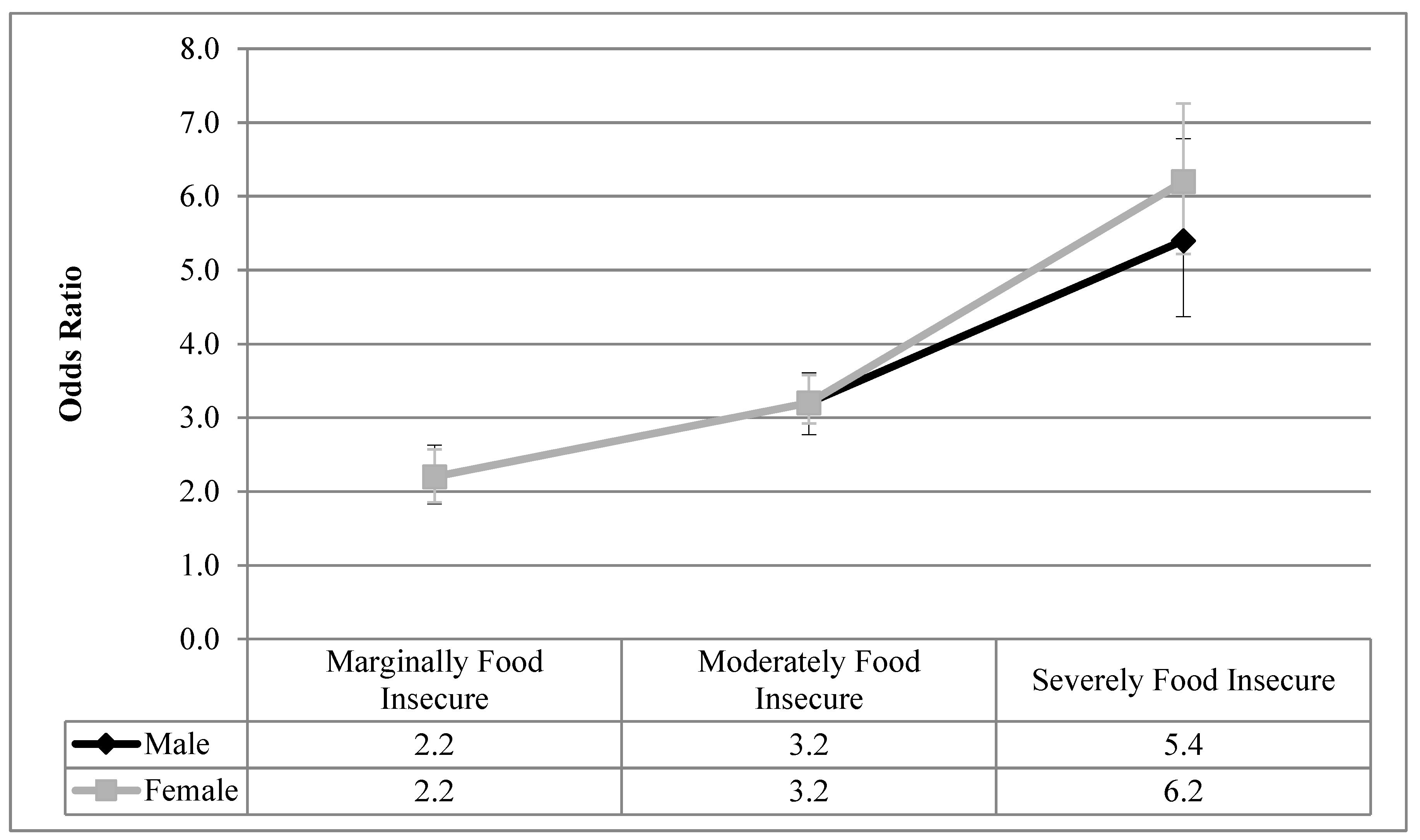