According to the World Health Organization, dementia is one of the main health problems affecting older people [1]. The most common form of dementia worldwide is Alzheimer’s disease (AD) (50–70% of cases) [2], followed by vascular dementia (12.5–25%) [3,4]. In Spain, approximately 600,000 people suffer from any type of dementia, of whom 400,000 suffer from Alzheimer’s disease [5]. The prevalence of dementia ranges from 5% to 17.2% [5,6,7].
In the advanced stages of Alzheimer’s disease (AD), the care required is more complex, so high-quality care can often only be provided in institutions such as nursing homes. As a result, many elderly people with AD are admitted [8]. In Spain, two-thirds of the elderly people admitted to nursing homes suffer from dementia [9].
Optimal dementia care in nursing homes adopts a person-centered perspective that focuses on maximizing residents’ quality of life [10]. Nursing homes play an important role in providing care for dependent elderly people, so ensuring high quality of care for residents in these settings is essential. Poor-quality care has been associated with inadequate nursing staffing and a poor skill mix [11].
In nursing homes, quality has two dimensions: quality of care and quality of life. Quality of care refers to more technical aspects of care (such as the use of restraints or the prevalence of pressure ulcers) while quality of life refers to issues such as residents’ autonomy or decision-making capacity [11]. The most commonly used indicators of quality of care are pressure ulcers, use of restraints, functional status, mortality, hospitalization, nutritional status, incontinence, etc. [11]. Factors such as depression, conduct disorders, and functional limitation impair quality of life [10]. The quality of care is not only determined by the staff ratio but also by other factors such as management practices, the education level of the nurses, proper staffing, care planning, and recruitment and retention issues [10,11].
Until now, research in this area has tended to focus on measuring quality in relation to the number of nurses. Other determinants, such as turnover, workers’ stability, staff training and care management, may affect the staff’s performance and their relationship to the quality of care provided to residents [11].
Nurses and health-care workers who care for people with dementia must receive specific training to provide high-quality care [12]. Several studies have determined the knowledge that health-care professionals have about AD and other dementias, finding that registered nurses (RNs) have greater knowledge than assistant nurses (ANs) [13,14]. In addition, among the staff who provide care to people with dementia in nursing homes, there is great variability in terms of academic education and training [15]. Some studies found that usually the staff providing 90% of basic care to people with dementia have low qualifications (ANs or eldercare workers (EWs)) [16].
Knowledge about dementia is determined by education and training [17], but also by direct practical experience when caring for people with dementia [18]. Nursing home managers should promote continuous education and in-service training activities aimed at engaging the staff [19,20]. Training positively influences staff confidence, improving their performance and the quality of care provided [21].
Several studies have addressed the issue of nurses and other health-care workers caring for people with dementia. In Portugal, a qualitative study found that nurses in hospitals have limited knowledge about the characterization of AD, risk factors, diagnostic means, complications, and drugs for the treatment and care of patients and carers [22]. Another study in Australia concluded that health workers had moderate knowledge, but there were significant differences between workers with and without previous experience in caring for people with dementia [12]. Robinson et al. compared the knowledge about dementia care among nurses, nursing assistants, and family members. Surprisingly, some family members have greater knowledge of dementia than RNs [23].
Therefore, the literature shows that it is important to know the level of knowledge about AD and dementia of the nurses and care workers who care for people with dementia. The aims of this study were: (a) to determine the knowledge of staff in nursing homes in Spain about evidence-based practices in caring for people with AD; and (b) to analyze which factors are associated with this knowledge.

A cross-sectional study was conducted in 24 nursing homes (5 public and 19 private) located in the province of Jaén (southern Spain). Twenty-six nursing homes were contacted, two of which refused to participate; this is 33% of the total number of 72 nursing homes in the province. The staff of nursing homes is mainly composed of registered nurses, assistant nurses, and eldercare workers, as well as some physiotherapists, social workers, and occupational therapists. Only two of the nursing homes had a doctor on the staff; the others had doctors providing services a few hours some days of the week.
The STROBE guidelines were used for reporting this study [24].

The data were collected by using a self-administered form with two sections:
The knowledge about caring for people with AD and other dementias was measured using the UJA-Alzheimer’s Care Scale (Spanish version) (UJA stands for University of Jaén) [25]. This is a 23-item questionnaire with three response options: “Yes”, “No”, and “I don’t know”. Correct answers are scored with 1 point; errors and “don’t know” with 0 points. Total score: 0–23 (more points means more knowledge). This questionnaire has good psychometric characteristics among Spanish nursing home staff: internal consistency (α = 0.70), test-retest reliability (intraclass correlation coefficient = 0.83), and convergent validity with the Spanish version of the Dementia Knowledge Assessment Tool 2 (DKAT2-Sp) [26] (ICC = 0.62). It is easy to administer and can usually be completed in 5–10 min.

Data collection was conducted from November 2016 to January 2017. The research protocol was approved by the Jaén Research Ethics Committee (project code 25102012).
First, we contacted the directors of the nursing homes to request collaboration and the authorization to administer the questionnaires to the staff of these centers. Then, each center received a number of printed questionnaires in accordance with the number of people on their staff. To guarantee anonymity, no personal data were included in the questionnaire.

The characteristics of participants were analyzed using descriptive statistics, frequencies and percentages for categorical variables, and mean and standard deviation for continuous variables. To obtain knowledge scores, the mean, standard deviation, 95% confidence interval (CI), and the percentages of correct, incorrect, and “don’t know” answers were calculated. The final score of the scale corresponds to the number of correct answers. In addition, the count and percentage of errors (incorrect answers) and “don’t know” (explicitly marked) were calculated. The option “don’t know” allows identifying the gaps in knowledge.
The association between demographic or educational variables and the knowledge score was tested using the Student’s t-test or one-way ANOVA. The effect size was estimated using the Cohen’s d statistic. A multivariate analysis by stepwise linear regression was carried out with the variables with statistical significance in the bivariate analysis. Analyses were performed with SPSS 21 (IBM® International Business Machines Corporation, Armonk, NY, USA). A value of p < 0.05 was used as the level of statistical significance.

In total, 361 questionnaires valid for analysis (51.5% response rate) were obtained from the 24 nursing homes surveyed. Table 1 shows the main characteristics of the participants.

The association between the score on the UJA Alzheimer’s Care Scale and several demographic and educational factors was tested. The age of the professionals did not correlate with the knowledge score, either in RNs (r = 0.195; p = 0.113) or in ANs and EWs (r = 0.091; p = 0.142). Table 4 shows a comparison of the mean knowledge scores according to the variables tested, in both groups.
The variables that showed a statistically significant association with the knowledge score in the bivariate analysis were adjusted using a linear regression model (stepwise model). Linearity, residual independence, homoscedasticity, and non-collinearity were tested. Model fit was tested by R2. In the group of RNs, two variables remained with statistically significant association after adjustment: work experience (beta = 0.393; p = 0.001) and attendance at courses on dementia in last three years (beta = 0.256; p = 0.034). In the group of ANs and EWs, only attendance at courses on dementia in the last three years remains significant (beta = 0.182; p = 0.011).

At the level of each nursing home, we found great variability in the staff knowledge about AD care, according to the mean score on the UJA Alzheimer’s Care Scale. Figure 1 shows the mean scores of the 24 nursing homes surveyed ranked in knowledge score decreasing order. Eight nursing homes scored above the upper limit of the CI95% of the overall mean (staff with high knowledge) and six scored under the lower limit (staff with poor knowledge). Most of the nursing homes with the highest knowledge scores have the lowest errors and ignorance scores. Nevertheless, there is a strong negative correlation between errors and ignorance scores, after adjustment for knowledge score (r = −0.96; p < 0.0001), thus, in nursing homes where staff do not recognize that they do not know the answers for certain items, they had more errors.
To explain the variability found in the knowledge scores among the nursing homes, some of their characteristics were analyzed. Nursing homes were classified according to: the number of residents; the experience of the staff members (percentage of RNs, ANs and EWs with more than 5 years or more than 15 years of experience); updating of training (percentage of staff who have attended dementia courses in the last three years); and the ratio of residents per staff member (median = 2.90, minimum = 1.14, and maximum = 7.50). Table 5 shows the characteristics of the 24 nursing homes and their association with the mean knowledge score obtained in each nursing home. Neither the size of the nursing home (number of residents) nor the ratio of residents per staff member was associated with the knowledge score. The experience of the staff and the updating of training were associated. Nursing homes with a very inexperienced staff (less than 33% having more than five years of experience) scored lower than the rest (moderate effect size). In addition, nursing homes with a high percentage of staff having recently attended dementia courses scored higher (moderate effect size).

The nursing staff working in nursing homes in the province of Jaén has a medium to high knowledge about Alzheimer’s disease care. The knowledge score is higher among RNs than among ANs and EWs. Nevertheless, there is a wide range of variation in the mean score at the level of each nursing home, with a small group of nursing homes having higher than average scores. Future research should be aimed at identifying the factors that explain this variability. The knowledge score of the RNs is associated with the years of working experience and with receiving updated training in dementia. For ANs and EWs, only receiving updated training is associated with the knowledge score. Nursing staff of nursing homes must be trained to respond to the needs of their patients, adapting and updating themselves in the new person-centered approaches to care.

We wish to thank all the professionals that participated in this study. 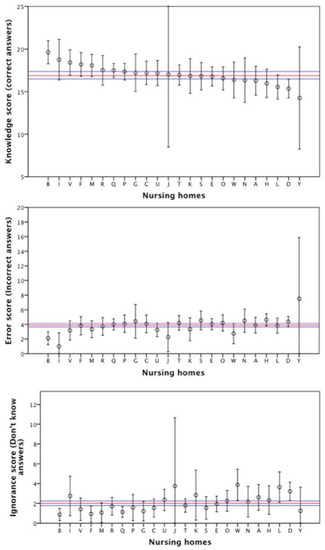