Freeway rerouting and replacement with a street-level boulevard are urban transportation policies, that may help redress disproportionate air pollution burdens resulting from freeway construction that took place during the mid-20th century. However, environmental justice activism for freeway rerouting and urban green space creation may have the unintended consequence of environmental gentrification. In this paper, we investigate the effects of freeway routing decisions on exposure to traffic-related air pollution and neighborhood socioeconomic and demographic change. We focus on the effects of rerouting the Cypress Freeway in West Oakland, along with the construction of a street-level boulevard (Mandela Parkway), on the original freeway alignment. The impacts of two rebuild scenarios, freeway rebuild-in-place and reroute, on near-roadway NOx and BC concentrations are compared. We also assess changes in demographics and land use in West Oakland, between the time when the Cypress Freeway was damaged by a major earthquake and after completion of Mandela Parkway. Our research indicates that freeway rerouting reduced annual average concentrations of both NOx (−38% ± 4%) and BC (−25% ± 2%) along the Mandela Parkway alignment. However, there is evidence of environmentally driven neighborhood change, given that there are larger decreases in the long-time Black population (−28%) and increases in property values (184%) along Mandela Parkway, compared to West Oakland as a whole. There are some attributes along the Mandela Parkway that enable low-income residents to live in proximity to the street-level boulevard, such as affordable housing. View Full-Text
Keywords: freeways; boulevards; urban green space; transportation; traffic-related air pollution; environmental gentrification freeways; boulevards; urban green space; transportation; traffic-related air pollution; environmental gentrification
►▼ Show Figures 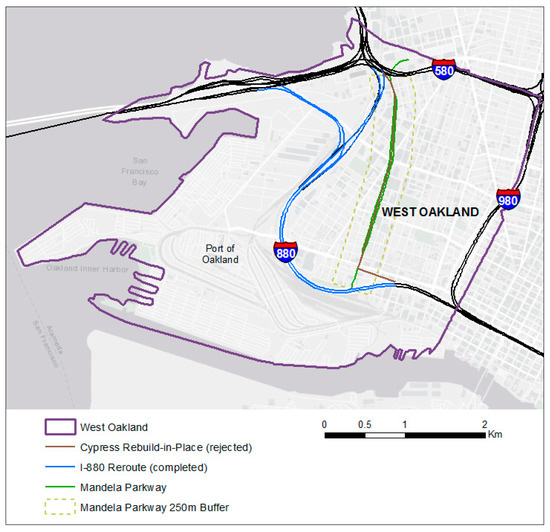