The Prevalence of Overweight, Obesity, Hypertension, and Diabetes in India: Analysis of the 2015–2016 National Family Health Survey

Tariq A. Abdulrahman
and

Overweight, obesity, hypertension, and diabetes increase the risk of non-communicable diseases and all-cause mortality worldwide. Previous studies have not determined the prevalence of these conditions/diseases throughout India. Therefore, this study was aimed to address this limitation. Data on these conditions/diseases among men and women aged ≥ 18 years were obtained from the fourth National Family Health Survey conducted throughout India between January 2015 and December 2016. The prevalence and prevalence rate per 100,000 population were calculated at the national level and by age group, sex, and type of residence for each state and union territory. The national prevalence of overweight, obesity, hypertension, and diabetes were 14.6%, 3.4%, 5.2%, and 7.1%, respectively. The highest prevalence of these conditions/diseases at the national level was seen among those aged 35–49 years (54 years for men), especially women living in urban areas. In India, 1 out of every 7, 29, 19, and 14 individuals at the national level had overweight, obesity, hypertension, and diabetes, respectively—between 2015 and 2016. These results are important for the healthcare system and government policies in the future. Moreover, targeted efforts are required to establish public health strategies for the prevention, management, and treatment of these conditions/diseases throughout India.
Keywords: obesity; hypertension; diabetes; prevalence; rate; urban; rural; India obesity; hypertension; diabetes; prevalence; rate; urban; rural; India

India is the second most populous developing country with industrialization, and rapid urbanization has resulted in a significant number of people being overweight or obese and/or having elevated blood pressure and blood glucose [1,2]. These conditions/diseases increase the risk of non-communicable diseases [3]. Moreover, the coexistence of these conditions/diseases causes a considerable rise in disease risk [4]. It is well established that poor health outcomes and all-cause mortality, approximately 2.8 million cases (1 in 6 individuals) annually, are attributed to overweight, obesity, hypertension, and diabetes [5], possibly because these conditions/diseases increase the likelihood of coronary heart disease, stroke, certain cancers, obstructive apnea, and osteoarthritis [5].
Overweight and obesity are considered to be significant and increasing public health problems worldwide [6]. The prevalence of overweight and obesity (ranging from 26% to 3%, respectively) and associated deaths (6.5%) in adults are rising rapidly in several countries [3,7], including India [6,8]. The 2016 World Health Organization (WHO) report described overweight/obesity as a pandemic in India because of a 3.4% increase in prevalence from 2006 (8.4%) to 2016 (11.8%) [6]. A previous review also reported an overall increase in the prevalence of overweight and obesity between 1998 and 2006, from 11% to 15% in men and women aged 15–49 years [2].
One of the major treatable public health problems on the rise is hypertension, and it is linked to both overweight and obesity [9]. Hypertension underlies the development of cardiovascular diseases, other non-communicable diseases, and mortality (32.5%), both globally and in India [9,10,11,12]. A recent review revealed that the overall prevalence of hypertension in India was 29.8%, and it varies between rural (27.6%) and urban (33.8%) populations [13]. Another community-based study demonstrated that the prevalence of hypertension was higher in urban than in rural areas [14].
The most common chronic disease worldwide is diabetes mellitus, and its prevalence has risen from 4.7% (108 million) in 1980 to 8.5% (422 million) in 2014 among adults aged ≥ 18 years [15]. Approximately, 439 million adults are estimated to have diabetes by 2030 [16]. The highest increase in prevalence is expected to occur in low- and middle-income countries, including India [15,17]. In 2010, India had the highest number of people with diabetes, around 50.8 million; this number is set to increase to 87 million by 2030 [18]. Every year, about 1 million deaths in India are attributed to diabetes; it is also the primary reason for blindness, kidney failure, heart attack, stroke, and lower limb amputation [19].
Numerous earlier studies have estimated the prevalence of overweight, obesity, hypertension, and diabetes among adults in rural and urban India [20,21,22,23,24]. However, these studies were focused on certain parts of India and used various methodologies and populations. Moreover, different cut-off points for determining overweight, obesity, hypertension, and diabetes were used in these studies. A recent study examined trends in the prevalence of overweight/obesity by socioeconomic position between 1998 and 2016 using data from the national family health surveys conducted in India. However, that study was limited to 1 condition (overweight/obesity) in a different population aged ≥ 15 years with a body mass index (BMI) cut-off score of 24.99 kg/m2. Furthermore, prevalence data by rural and urban areas for each of the Indian states are not presented [8]. Thus, the authors acknowledged the absence of studies that estimated the prevalence of overweight, obesity, hypertension, and diabetes in all 36 Indian entities, comprising 29 states and 7 union territories (UTs), according to age group, sex, and type of residence [8,17,21,22,24].
The purpose of this study was to address the above-mentioned shortcomings by determining the prevalence of overweight, obesity, hypertension, and diabetes (i) at the national level by age group, sex, and type of residence; (ii) per age group for each Indian state and UT; (iii) per age group, sex, and type of residence for each Indian state and UT; and (iv) at the national level (overall prevalence rates) and for each Indian state and UT.

This study was set out to determine the prevalence of overweight, obesity, hypertension, and diabetes at the national level and for each state and UT in India according to age group, sex, and type of residence. The results of this study showed that India was an overweight state of the nation, followed by diabetes, hypertension, and obesity, respectively, between 2015 and 2016. Individuals aged 35–49 years (54 years for men) living in urban areas, especially in Lakshadweep, Nagaland, and Delhi, had the highest prevalence of these conditions/diseases compared to those aged 18–34 years living in rural areas. While Uttarakhand had the highest rate of overweight with more than the national average, West Bengal, Uttarakhand, Uttara Pradesh, Tripura, Telangana, and Tamil Nadu had higher rates of obesity than the other states or UTs of India. The highest prevalence of hypertension was seen in the urban areas of Arunachal Pradesh and Assam. Our findings should be a matter of great concern warranting urgent preventive measures at a multidisciplinary level, involving the central and state governments, non-governmental organizations, and healthcare professionals, to implement policies and programs to improve the well-being and quality of life of individuals at the regional and national levels. Further studies should be conducted using waist circumference and body fat percentage to assess overweight and obesity and examine the risk factors for overweight, obesity, hypertension, and diabetes throughout India.

The following are available online at https://www.mdpi.com/1660-4601/16/20/3987/s1, Table S1: Questions used and procedures followed in identifying the presence of overweight/obesity, hypertension, and diabetes among adults under the National Family Health Survey 2015–2016.

V.V. data collected, analyzed and wrote the draft. T.A.A. and S.M.B. interpreted the results, discussed, and critically reviewed the draft. All authors had final approval of the submitted versions.

We thank the Deanship of Scientific Research at King Saud University for funding this work through Research Group No. RG-1438-085. The funding body played no role in study design, the writing of the manuscript, or the decision to submit the manuscript for publication.

We would like to thanks measure DHS for granting us access to the data used in this study. 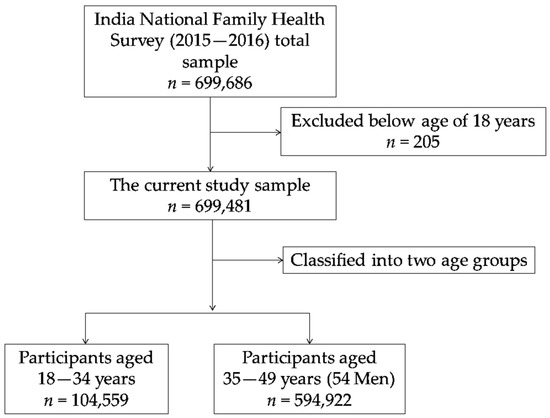 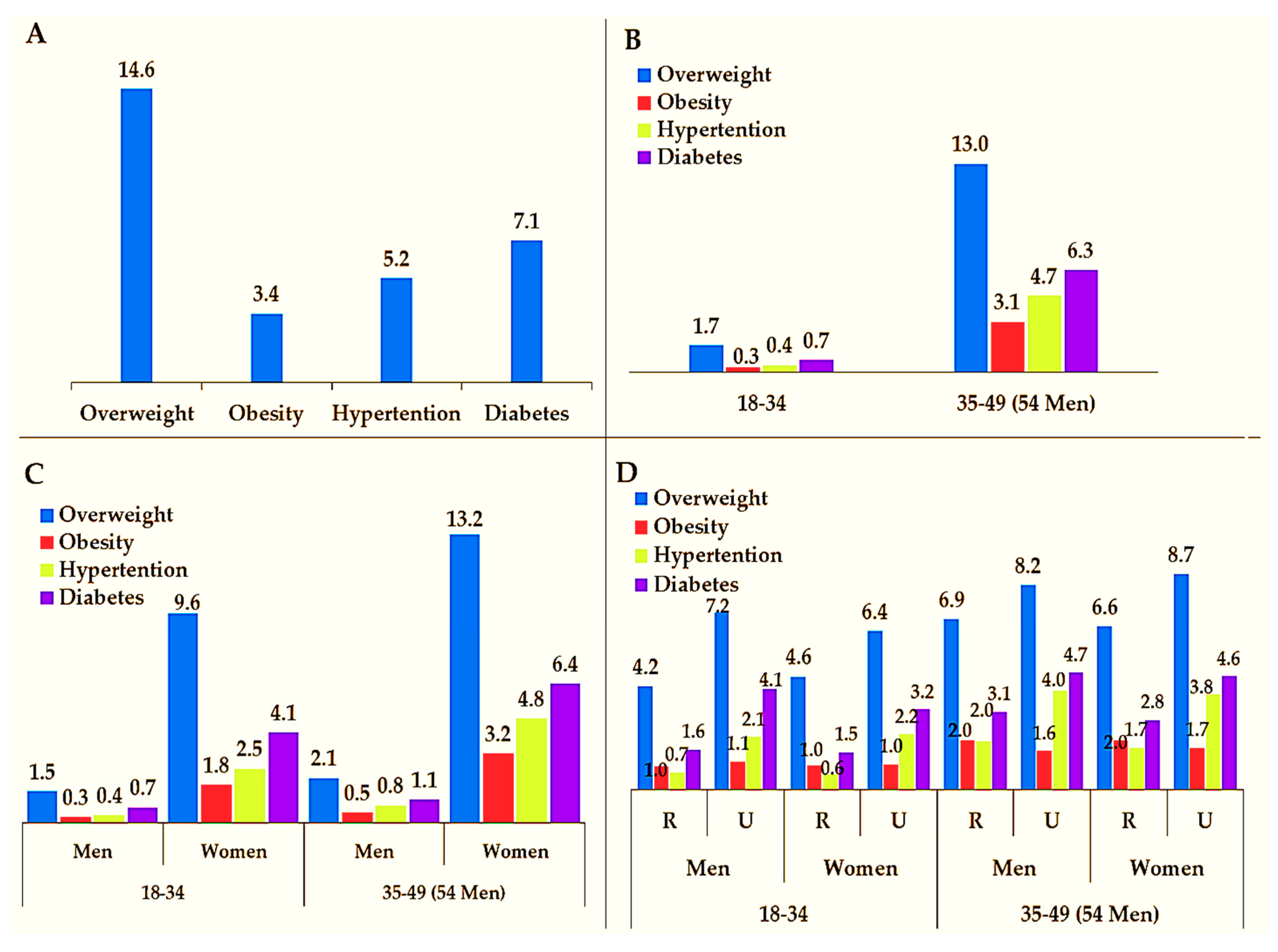 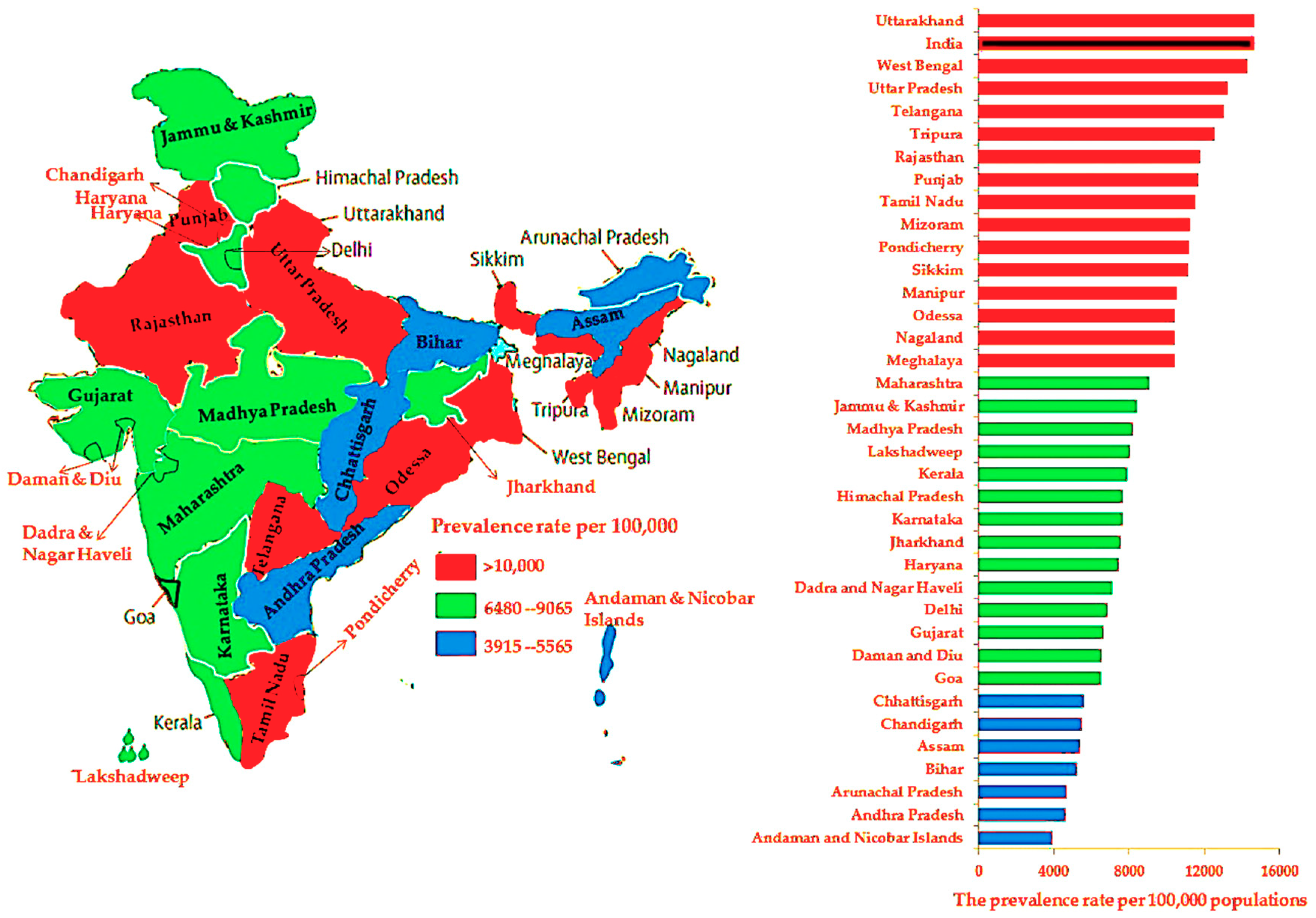 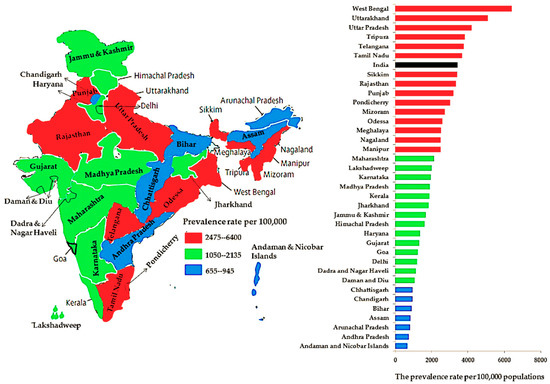 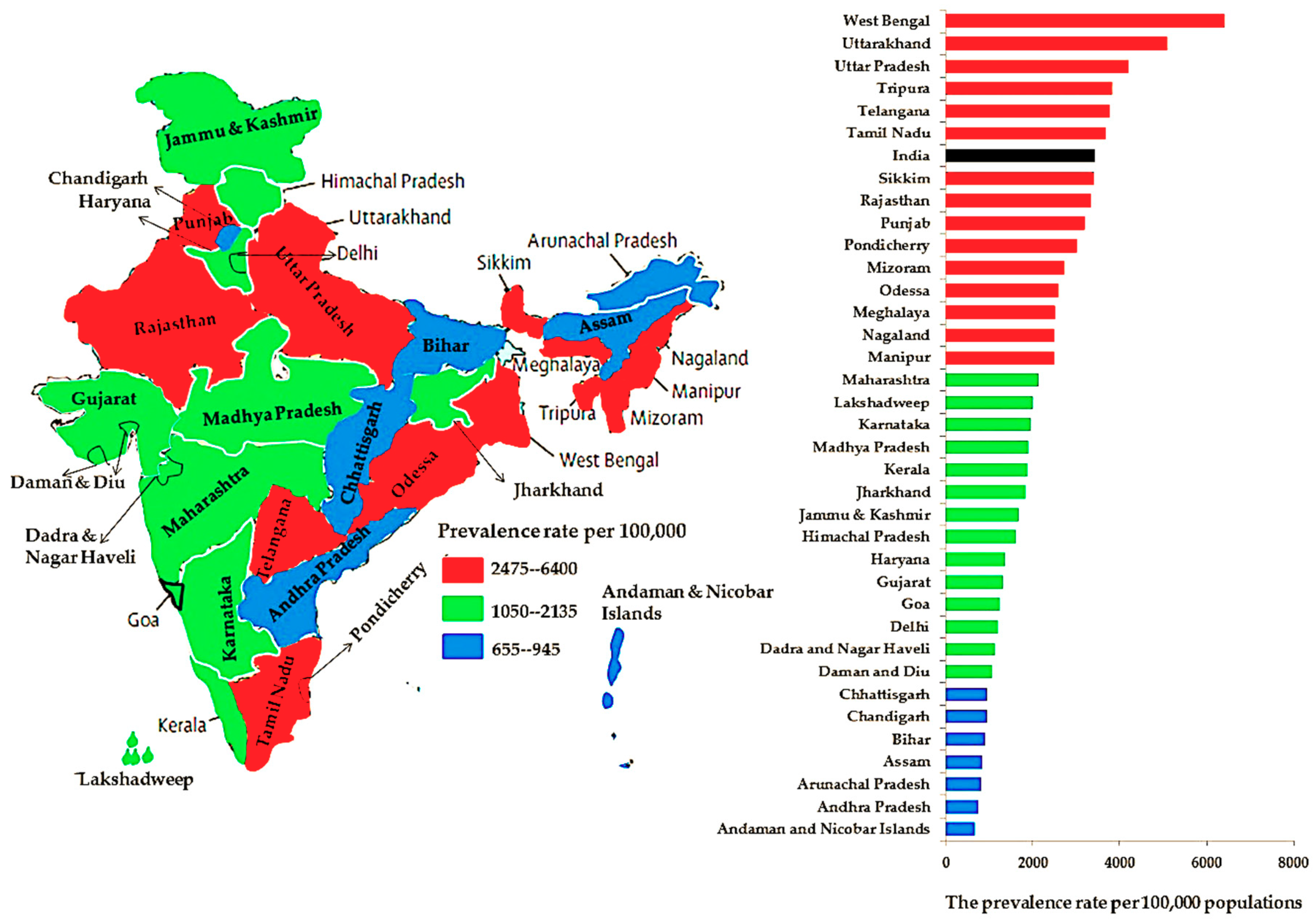 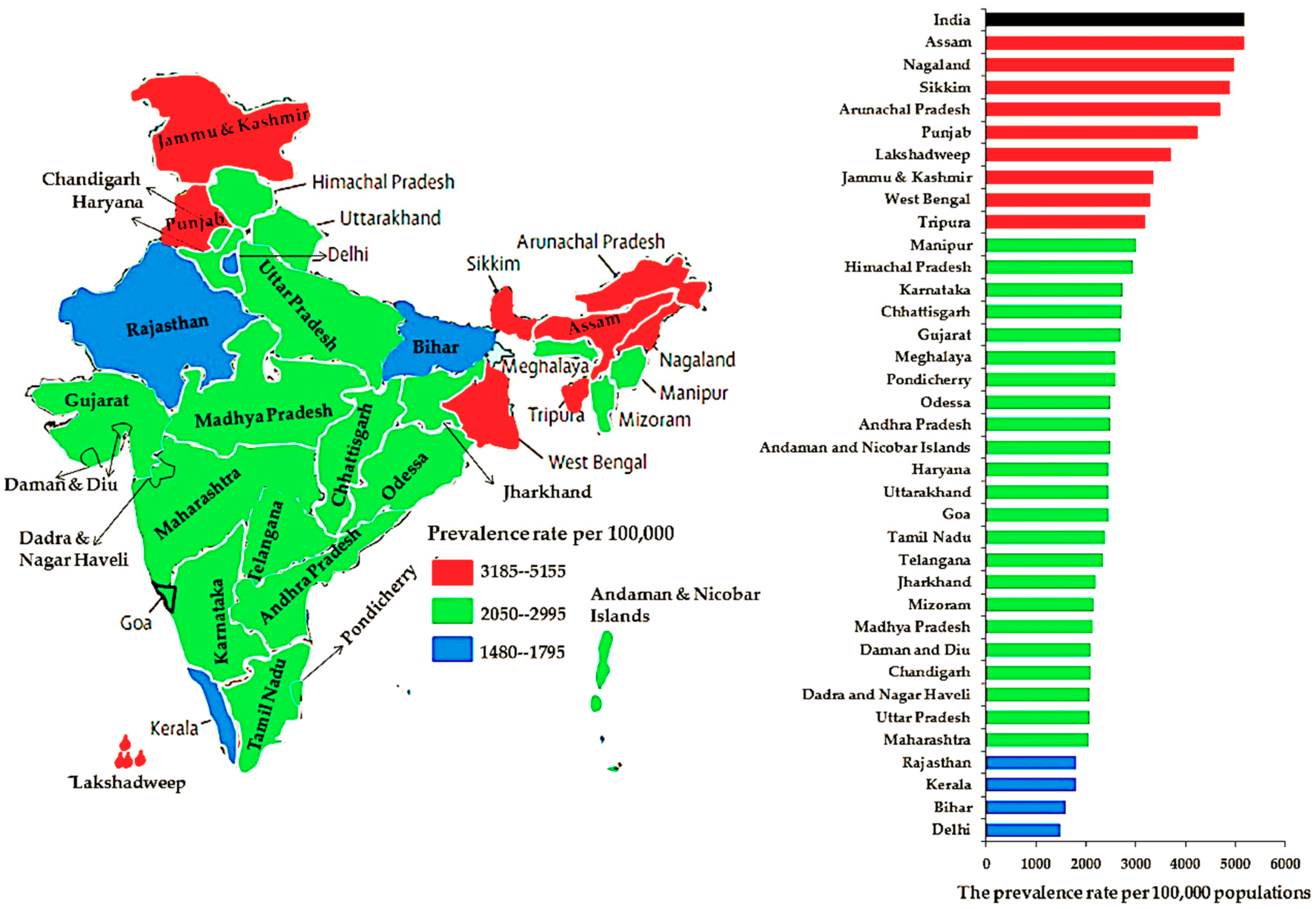