Age-Period-Cohort Analysis on the Time Trend of Hepatitis B Incidence in Four Prefectures of Southern Xinjiang, China from 2005 to 2017
Previous Article in Journal

Multidimensional Health Groups and Healthcare Utilization Among Elderly Chinese: Based on the 2014 CLHLS Dataset

The Effect of Virtual Reality Games on the Gross Motor Skills of Children with Cerebral Palsy: A Meta-Analysis of Randomized Controlled Trials

All randomized controlled trials in the literature should compare the influence of VRGs and traditional therapy over the gross motor skills of children with CP, evaluate its methodological quality, and integrate the experimental data. The following inclusion criteria were used to select articles for the meta-analysis: (1) The literature should be published, excluding conference abstracts. (2) The subjects of studies are children with CP(e.g., children with hemiplegic cerebral palsy, children with diplegic cerebral palsy, children with quadriplegia cerebral palsy). (3) VRGs are the main therapeutic interventions (e.g., VRGs and untrained, VRGs combined with traditional rehabilitation therapy and traditional rehabilitation therapy only). (4) The research should provide sample size, mean, standard deviation. (5) The outcome indicators are gross motor skills.
The following exclusion criteria were used to select articles for the meta-analysis:(1) In terms of titles and abstracts, theoretical research, systematic reviews, or the papers in which subjects were adults or the elderly, in which there was no control group in experiments, or in which other interventions were used, should be excluded. (2) From the perspective of the full text, the papers would also be excluded if it was non-RCT research, if subjects were over 18 years’ old or did not suffer from CP, if the outcome indicators failed to meet the requirements of analysis, or if result data were missing.

Kappa index is often used to analyze the consistency of two people’s (or two test methods’) opinions on the same subject. The general standard of judgment is: Kappa index > 0.75, better consistency; 0.75 ≤ Kappa index ≤ 0.4, good consistency; Kappa index < 0.4, poor consistency.
The risk of bias of the included studies was carried out by two independent assessors as per the PEDro scale [28]. In case of divergence of opinion between the two assessors, a third assessor would intervene. When reaching a consensus, the assessors would make a final decision on the quality of included studies. The following 11 criteria were taken into consideration (one point for each criterion): a. eligibility criteria were specified; b. subjects were randomly allocated to groups; c. allocation was concealed; d. the groups were similar at baseline regarding the most important outcome indicators; e. there was blinding of all subjects; f. there was blinding of all therapists; g. there was blinding of all assessors; h. measures of at least one key outcome were obtained from more than 85% of the subjects initially allocated to groups; i. all subjects for whom outcome measures were available received the treatment or, where this was not the case, data for at least one key outcome was analyzed by “intention to treat”; j. the results of between-group statistical comparisons were reported for at least one key outcome; k. the study provided both point measures and measures of variability for at least one key outcome. The highest mark for each study was 11: low risk of bias (=7 or more); moderate risk of bias (=5–6); high risk of bias (=4 or less).

In the process of retrieval, two searchers extracted the relevant indicators from the included literature using the independent and double-blind method. After reading papers, the following data were extracted: names of the first authors, years of publication, nationality, sample sizes, subjects, GMFCS level, subjects characteristics (number, gender and age), the intervention plan of VRG group (intervention method; intervention frequency; overall time of intervention), intervention location, platforms and types of VRG, outcome indicators. For outcome indicators, each RCT baseline as well as the mean (M) and standard deviation (SD) after intervention were extracted. If the research information that meets the inclusion criteria is incomplete, we will email or call the author in order to obtain accurate and objective real information.
Meta-analysis was applied to synthesize the eligible individual research results. The software Review Manager 5.3 was used in the analysis of outcome indicators of included literature to calculate effect size (the standardized mean difference (SMD) reflects the intervention effect of VRGs on gross motor skills in children with CP, and the random effects model [29] with 95% confidence interval (CI) was adopted. On top of that, I2 was used to perform the heterogeneity test: when I2 ≤ 25%, it indicates low heterogeneity in the studies; when 25% < I2 ≤ 75%, it indicates moderate heterogeneity in the studies; when 75% < I2 ≤ 100%, sensitivity analysis should be performed to determine the sources of heterogeneity by deleting one literature at a time. Moreover, publication bias should then be evaluated using the funnel plot and Egger’s test [30].

A total of 473 relevant papers were found through retrieval, including 65 from PubMed, 66 from EBSCOhost, 101 from Web of Science, 52 from InFormit, 34 from Scopus, 96 from Science Direct and 38 from ProQuest. As for Chinese databases, nine relevant papers were found in CNKI and six were found in Wan Fang Data. The overall number was reduced to 367 after repeated papers were deleted through NoteExpress 3.2.0 (AEGEAN, Beijing, China). In the light of their titles and abstracts, 85 papers were selected, and given the full text of these papers, 76 of them were excluded due to the failure to meet the inclusion criteria. The remaining 9 papers contain randomized controlled trials and the other contains randomized cross-over trial (Figure 1). The kappa index was 0.8734 for the abstract and 0.8932 for the full-papers.

In this research, the nine included RTC papers were published between 2014 and 2019, including six English studies and three Chinese studies. Their characteristics are shown in Table 1. The subjects were children with CP, but there were some differences among these children (e.g., children with spastic diplegia and spastic hemiplegia; children with hemiplegic cerebral palsy; children with spastic diplegic cerebral palsy; children with spastic cerebral palsy; children with hemiplegia, diplegia and quadriplegia cerebral palsy; children with bilateral spastic cerebral palsy). One paper did not report the CP type of the children. In addition, the GMFCS levels of children with CP were also significantly different. Level 1 to 5 all can be found in the included papers. The numbers of samples in these papers all ranged from 18 to 98, with the total number being 404. Two papers did not mention participants’ genders [31,32], and one did not state intervention locations [33]. The intervention concerned a comparison between VRG therapy and control group (VRGs versus no intervention, VRGs combined with traditional rehabilitation therapy versus traditional rehabilitation therapy only, VRGs versus traditional rehabilitation therapy). Some differences existed in the intervention plan. Firstly, each intervention took 17 to 40 min. Secondly, the frequency of intervention varied from 2 to 7 times a week, and the total duration of intervention ranged from 400 to 2400 min. Finally, the intervention periods were also remarkably different, with the shortest being 4 weeks and some longer ones reaching 9 weeks.
There were also great differences among VRGs platforms. Besides the commonly used platform Nintendo, the Eloton SimCycle Virtual Cycling System, Mitii, Q4 situational interactive training system, the somatosensory games on Microsoft Xbox Kinect platform, TYROMOTION GmbH, and limb A2 feedback system were also included. Four papers did not state the VRG types that children involved [31,34,35,36]. Furthermore, seven of nine papers had one outcome indicator while three papers had two (D and E in the GMFM test) [32,33,34].

For the quality assessment of included studies, the agreement among assessors was 92.5%. According to the PEDro scale, the methodological quality of all the experimental studies ranged from the score of 6 to 8. The higher the score, the lower the risk of bias (Table 2).
Specifically speaking, seven studies were deemed to have low risk of bias and two studies were deemed to have moderate risk of bias. Since allocation concealment was not conducted in all the included studies, the quality of included studies decreased. On top of that, blinding was hard to carried out in the studies (it was only conducted in one study), so the score of blinding was deducted for most of the studies.

3.4.1. Effects of VRG Group and Control Group on Gross Motor Skills of Children with CP

4.1. Meta-Analysis of the Intervention Effect of VRGs on Gross Motor Skills of Children with CP

4.2. Analysis of Influencing Factors of VRG Intervention on Gross Motor Skills of Children with CP

Gross motor activities, fulfilled by the torso, limbs and other big muscle groups, are basic motor skills developed in people’s childhood, an early stage of human life cycle, and they play a key role in children’s cognition and emotion development [58].In recent years, the effect of VRGs on children with CP has been verified through some experiments. This paper believes that VRGs could improve the motor balance of children with CP, which was mainly attributed to the fact that VRGs improved cerebral palsy children’s motor stability, postural control ability and the motor ability of the hemiplegic side.

4.2.1. VRGs may Improve the Movement Stability of Children with CP

4.2.2. VRGs may Improve the Postural Control Ability of Children with CP

4.2.3. VRGs may Improve the Motor Ability of Hemiplegic Side of Children with CP

This research has some limitations. To start with, there are only nine research studies included in this overwiew, so the sample size is not large enough, and the included studies may not be well-rounded; some conference papers and unpublished papers were not included, so there may exist publication bias [64]. Besides, included studies contain multiple interventions and measurement results. On top of that, the included studies are limited by insufficient descriptions of randomized control and blinding, and some data regarding the measurement in various fields in some experiments may be lost [65]. Moreover, this paper only takes the children with CP as the subjects, and does not distinguish among specific types of CP and different GMFCS levels. The most important limitation of this study is that the included papers involves more than one treatment, so it may be difficult to make clear that all the improvements come from the intervention of VRGs. Some papers do not match the search terms, but are located in the field that might be missed in this study [66]. Based on the above reasons, the intervention effects of VRGs on the gross motor skills of children with CP may be overrated. In the future, more rigorous and reliable randomized controlled trials are needed to accurately determine the long-term effects of VRGs on gross motor skills of children with CP.

Preliminary evidence shows that VRGs have positive effect on the improvement of gross motor skills of children with CP. Additionally, the single intervention time was 17–40 min, the intervention frequency should be over 5 times per week, the intervention cycle was over 12 weeks while the total intervention time should be more than 1000 min. VRGs essentially belongs to the functional training that based on the ecological theory [67] and dynamical systems theory [68], which focus on the role of the environment and the task in the performance of functional activities.The merits of functional training have been affirmed by the therapists for its advantage of more purposeful, more functional and more enjoyable for the children [14].In this case, VRGs as one of the home-based functional training auxiliary devices would have a greater impact on gross motor skills in children with CP. However, due to the limitation of current methodologies and the number of existing studies, the research results should be taken with caution. As for the VRGs is concerned, how to deliver and supervise children with CP rehabilitation between centre-based system and home-based system still need further research.

The leading author would like to thank his family members (wife, daughter, and parents) for their consistent support. 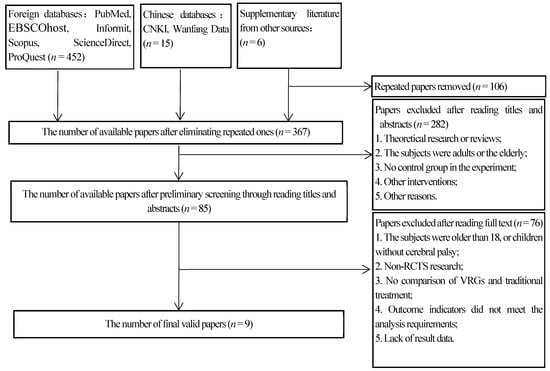 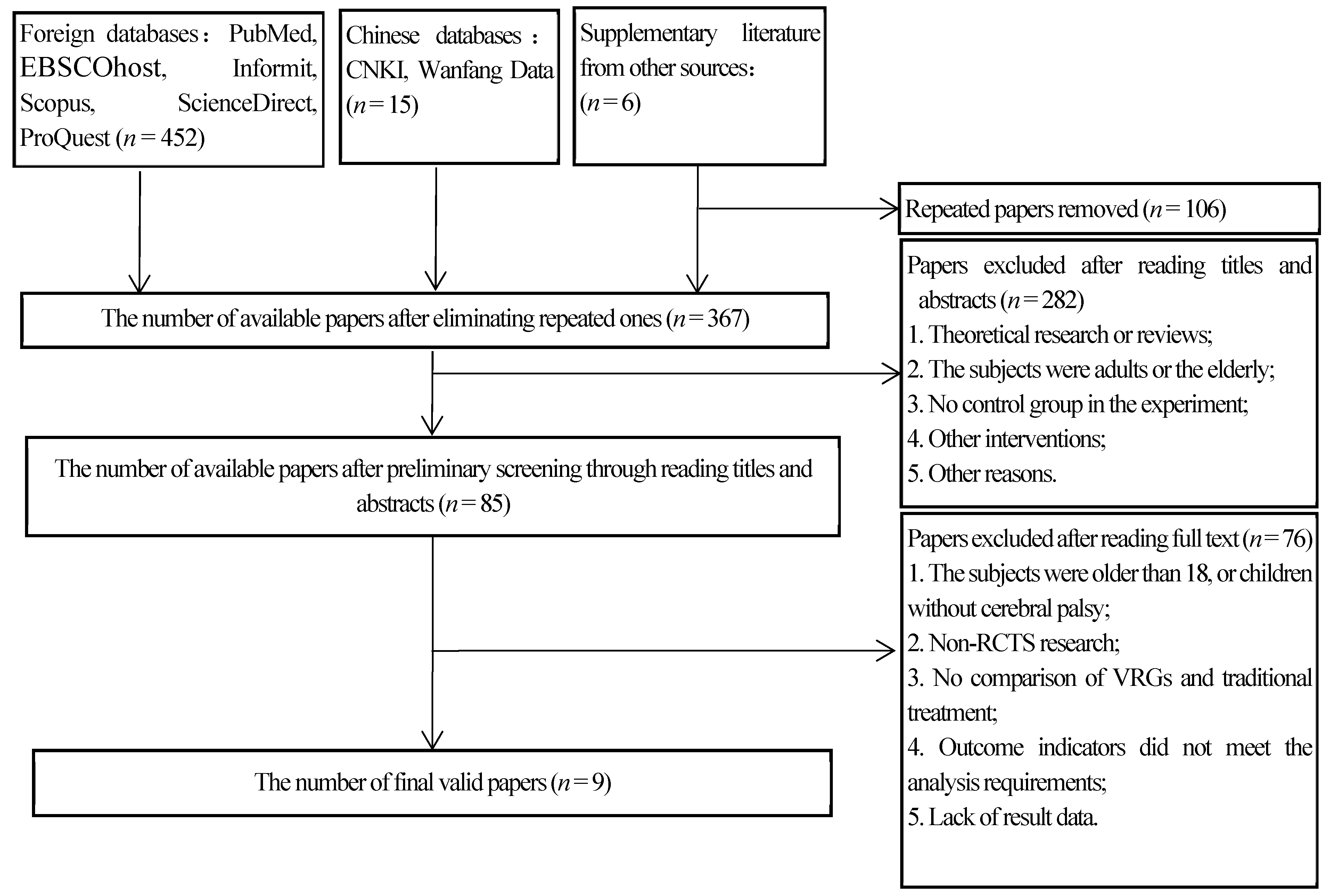