Breast Cancer and Exposure to Organochlorines in the CECILE Study: Associations with Plasma Levels Measured at the Time of Diagnosis and Estimated during Adolescence
Next Article in Special Issue

The use of microfiltered water dispensers (MWDs) for treatment of municipal water is increasing rapidly, however, the water quality produced by MWDs has not been widely investigated. In this work a large-scale microbiological investigation was conducted on 46 MWDs. In accordance with Italian regulations for drinking water, we investigated the heterotrophic plate counts at 36 and 22 °C for indicator bacteria and pathogenic bacteria, such as Enterococci, Pseudomonas aeruginosa, Escherichia coli and Staphylococcus aureus. Two different MWDs were compared: Type A with Ag+ coated carbon filter and two ultraviolet (UV) lamps, and Type B with a carbon filter and one UV lamp. For each type, the contamination of the input and output points was analyzed. Our findings showed that MWDs are a source of bacteria growth, with output being more contaminated than the input point. Type B was widely contaminated for all parameters tested in both sampling points, suggesting that water treatment by Type A is more effective in controlling bacterial contamination. MWDs are critical devices for water treatment in term of technologies, intended use, and sanitization procedures. The adoption of an appropriate drinking water safety plan associated with clear maintenance procedures and periodic environmental monitoring can ensure the safe and healthy operation of these devices.
Keywords: microbiological contamination; microfiltered water dispensers (MWDs); sanitation measures; drinking water safety plan (DWSP) microbiological contamination; microfiltered water dispensers (MWDs); sanitation measures; drinking water safety plan (DWSP)

The use of different sources to obtain water for human consumption instead of tap water or bottled water has been continuously increasing. One of these new sources is the microfiltered water dispenser (MWD). Since their introduction, MWDs have been introduced in industrial companies, university campuses, commercial buildings, etc. [1]. MWDs offer an alternative to bottled water, overcoming and even eliminating drawbacks that worsen the environmental impact of these products, such as the disposal of the container materials (e.g., plastic) [2]. MWDs are connected to the municipal water supply and can produce room temperature, chilled, or sparkling water. They are called microfiltered water dispensers because they contain filtration systems, such as activated carbon filters, sometimes associated with a membrane coated with Ag+ ions to produce a bacteriostatic effect [3,4]. Activated carbon filters are the most common system used to reduce the undesirable tastes and odors and remove organic and inorganic contaminants (e.g., humic acid, clays, chlorine, and residue by-products). The filtration systems are often associated with bactericidal ultraviolet (UV) lamps that act when water passes through the pipe associated with the UV lamp [5]. UV lamps are inserted inside the MWDs or at the water output points (nozzles) and are generally used for the destruction of airborne or surface microorganisms [6,7,8]. However, its germicidal effectiveness can be hindered by organic matter such as soil and biofilm [9]. The bacteria, amoebae, etc., present in the water can form an adherent biofilm inside the water conducts, which can increase the risk of water contamination [10,11].
The term “biofilm” describes a growth pattern where opportunistic pathogens, such as Pseudomonas aeruginosa and Legionella, which can negatively affect human health [12,13,14], thrive immersed in fluid and aggregate in a self-produced extracellular polymeric substance [12,15,16]. Therefore, bacteria growing within biofilms are more resistant to antimicrobial agents than planktonic cells of the same species [17,18].
To prevent contamination and biofilm formation and guarantee satisfactory water quality produced by MWDs, different sanitization procedures are applied following the standards prescribed by European and Italian regulations for drinking water [5,19,20,21,22]. However, few studies have been published on the microbiological quality of the water supplied from MWDs [23,24,25], despite the general increase in the use of these devices and the improvements in the technologies applied to water treatment. The reasons for the limited information about MWDs is probably associated with common use of the devices and a lack of a control performed by health authorities, who sometimes are not notified about their installation and use.
In Italy, it is mandatory for canteens and restaurants to notify the Public Health Authorities [26] about the use of MWDs, resulting in limited knowledge about the water quality produced by MWDs and the risk that can occurs thought water consumption by consumers.
Thus, the aim of this study was to evaluate the microbiological quality of the water supplied by two different types of MWDs located in different areas of an industrial site, called Type A and Type B based on their different water treatment technologies. Type A is characterized by a carbon filter, being Ag+-coated, and two UV lamps and Type B is based on a carbon filter and one UV lamp. To understand the contamination dynamics, we compared two sampling points in MWDs for each type: the input vs. the output. Then, we studied the contamination differences and focused on the technologies used for water treatment, the maintenance, and sanitization procedures performed. The microbiological quality of the water was tested through the determination of a typical indicator bacteria—heterotrophic plate counts (HPCs) at 36 °C and 22 °C—and pathogenic bacteria, such as Enterococci, Pseudomonas aeruginosa, Escherichia coli, and Staphylococcus aureus, according to the Italian regulations for MWDs and drinking water [5,19].

From 2015 to 2017, MWDs of two different types (called Type A and Type B for privacy reasons) were installed at a metalworking industrial site near Bologna, Italy. Type A, composed of a carbon filter coated with Ag+ and two UV lamp, was installed inside the canteens. The carbon filter, with a pore size of 0.5 μm, reduces tastes and odors, various organic and inorganic substances (e.g., humic acids, clays, chlorine, etc.), as well as disinfects byproducts in municipal water, and does not retain bacteria or viruses, while the Ag+ coating produces a bacteriostatic effect [5,25]. One low-pressure UV lamp (inner lamp) is located in a central body of the device after the carbon filter, and another low-pressure UV lamp consisting of a small quartz tube is placed above the supply point (output), with powers of 2.6 and 0.9 W, respectively. This type of MWD supplies chilled water, water at room temperature, and sparkling water as per the consumer’s request via three different pipelines feeding three supply points (Figure 1a).
Type B was installed in the common or private spaces within the industrial site (e.g., work area, coffee break area, offices, and recreational points). Type B is composed of a carbon filter with a pore size of 0.5 μm, without a Ag+ coating, and a single low-pressure UV lamp at the water supply point (output). The lamp consists of a small glass tube encircling the supply point with a power of 1.5 W. Type B provides water at room temperature and chilled water via one supply point (Figure 1b).
Both filters are “point of use” types used to treat water for drinking, meaning that they are connected to a main potable water network (municipal water) through a dedicated pipe containing a removable filter with pore size of 1 mm to remove particulate matter that can arrive from the water network. The capacity of MWDs are approximately 120–180 L/h for Type A and 20–28 L/h for type B.
The technical characteristics of MWDs were provided in the manufacturers’ manuals and conformed to the Italian regulations [5]. The purpose of the regulation is to guarantee that the treatments do not compromise the water quality of water already suitable under the health profile, that the processing equipment guarantees the claimed effects, and that complete information on the effects of treatments is provided to the consumer.

Following the drinking water safety plan (DWSP) for industrial site according to the World Health Organization (WHO) and Italian regulation for drinking water [19,27], the MWDs were monitored every six months to analyze water quality. From October 2015 to November 2017, a total of 46 MWDs were sampled. Out of 46 MWDs, 11 were categorized as Type A and 35 as Type B according to their technical characteristics. The sampling was repeated when the results were outside of legislation limits and disinfection procedures were undertaken for a total of 45 samples for Type A and 140 for Type B. For each MWD, 500 mL of water at room temperature were collected each from the input (a point connected to the municipal water distribution system) and output (point of water supply). The samples were collected according to EN ISO 19458 [28] via the post-flushing modality (running water for 1 min maximum) in sterile polytetrafluoroethylene (PTFE) bottles and maintained at 4 °C until the analysis, which was performed the same day.

The need for good quality water, both organoleptically and microbiologically, has led to the development of devices with new technologies to satisfy consumer demand. Our findings provide insight into the need for MWDs to be sold with correct and clear manuals explaining the cleaning procedures with specific instructions about flushing the input and output of the device, cleaning of nozzles, and the need for long-term procedures such as changing the filters and microbial analyses periodically performed in line with regulations on microbiological control. These considerations could help manufacturers improve the devices, the consumers to adopt good practices during the use of MWDs, and the public health authorities to demand compliance with water quality regulation.

This work was supported by a research grant from the Department of Biological, Geological, and Environmental Sciences, University of Bologna, Italy. The authors would like to thank the technical staff of Company (L.S.) for assistance during sampling and Graziella Ciani for help with microbiological analyses. 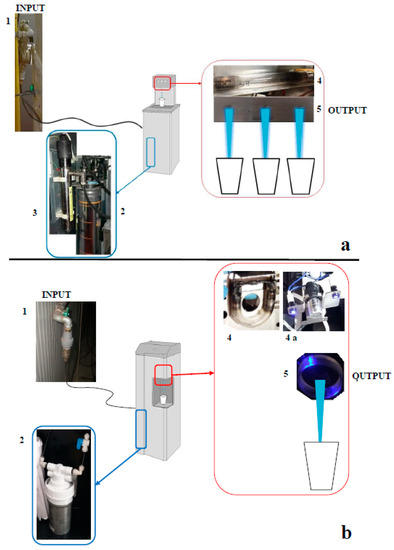 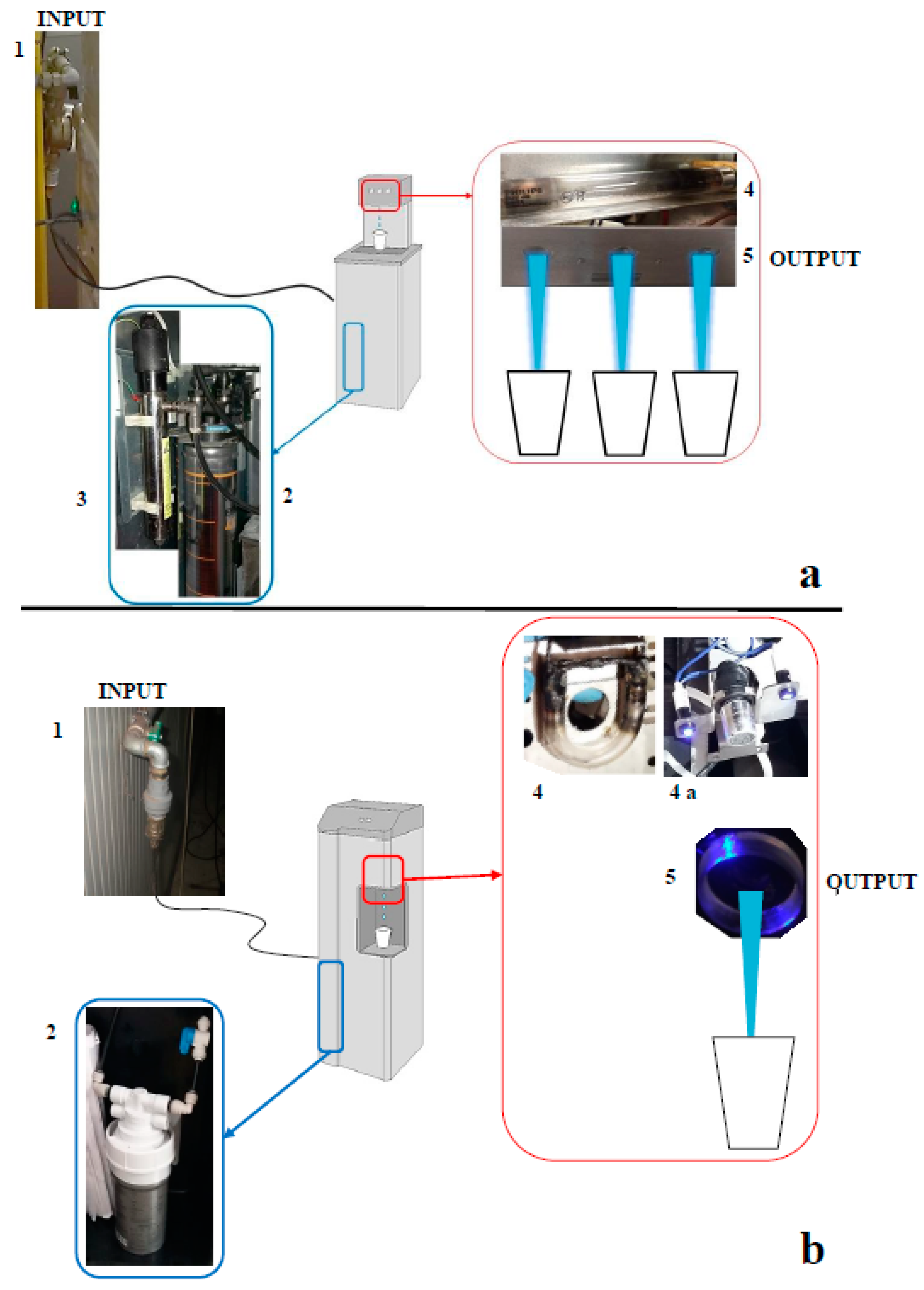 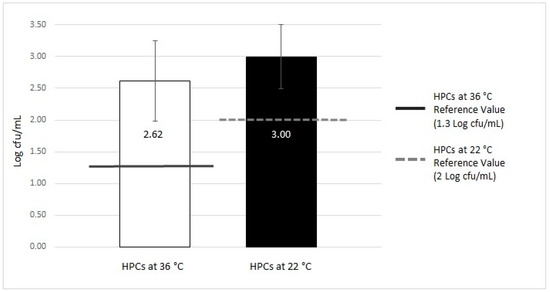 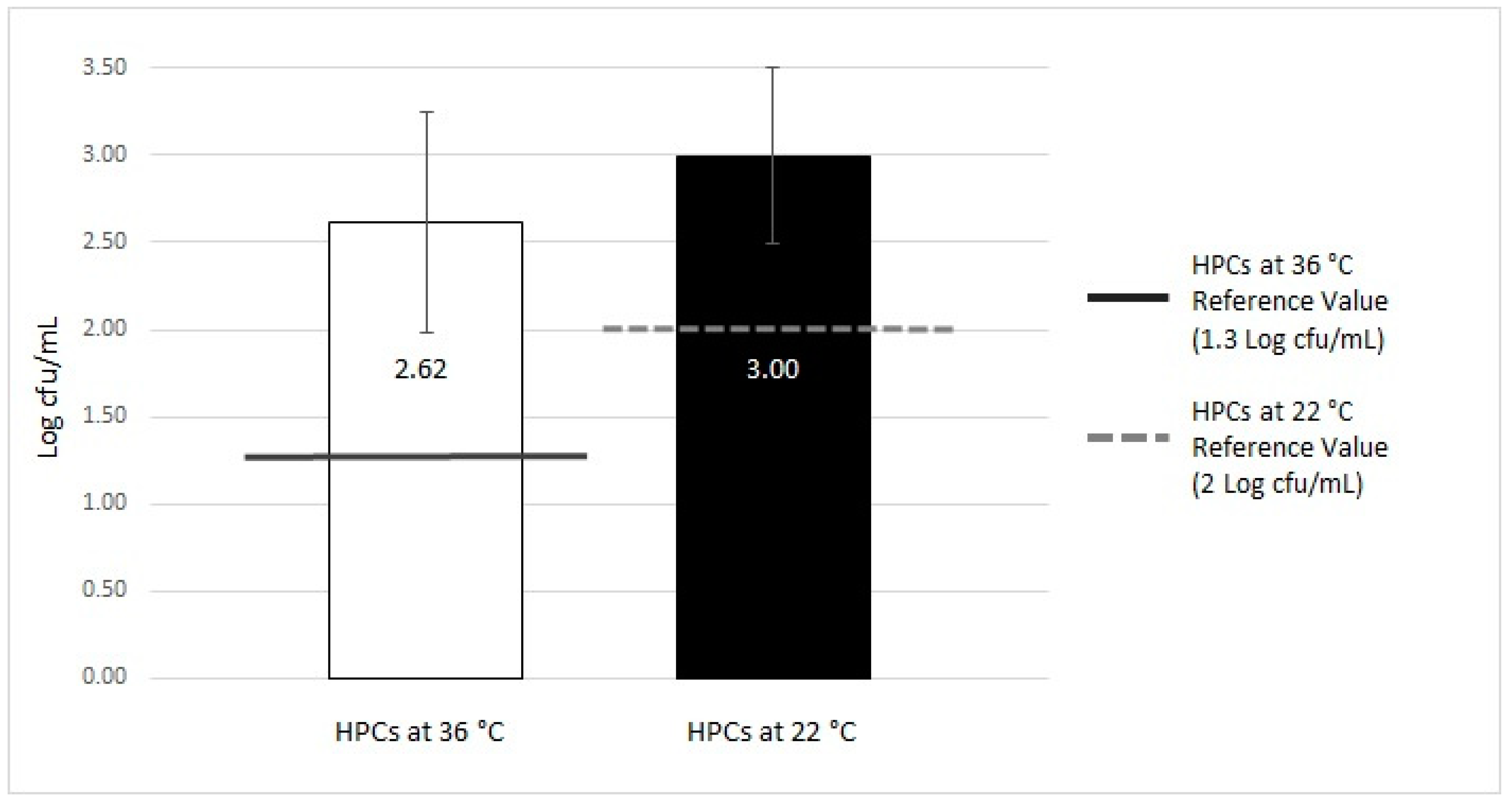 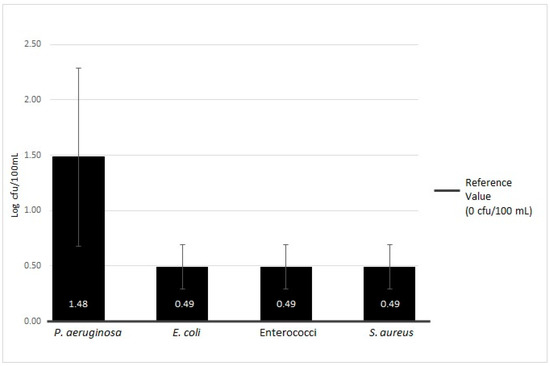 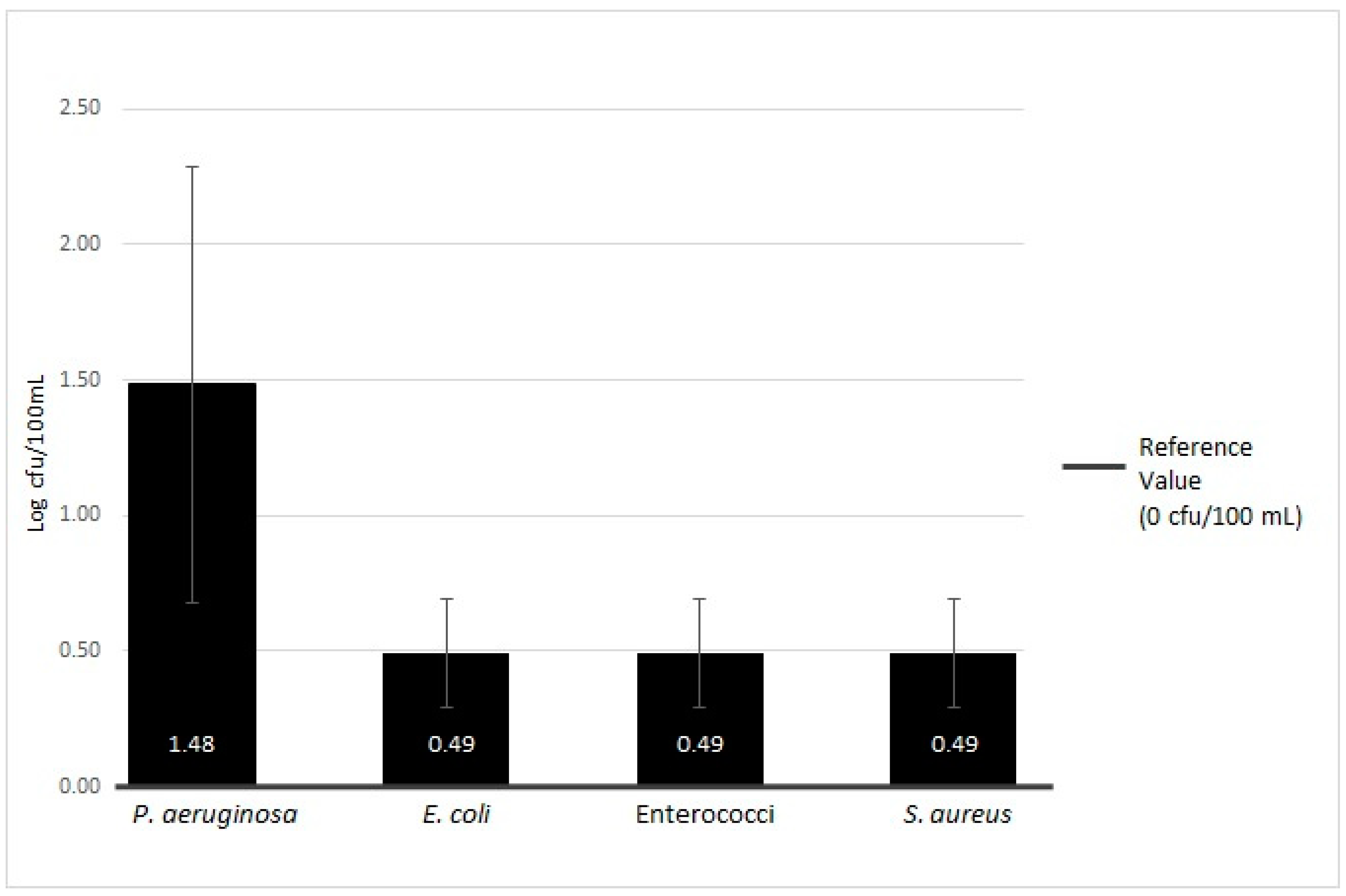 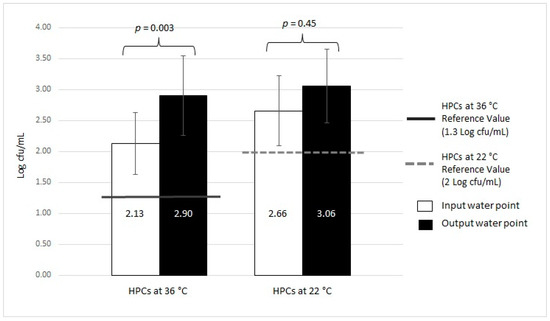 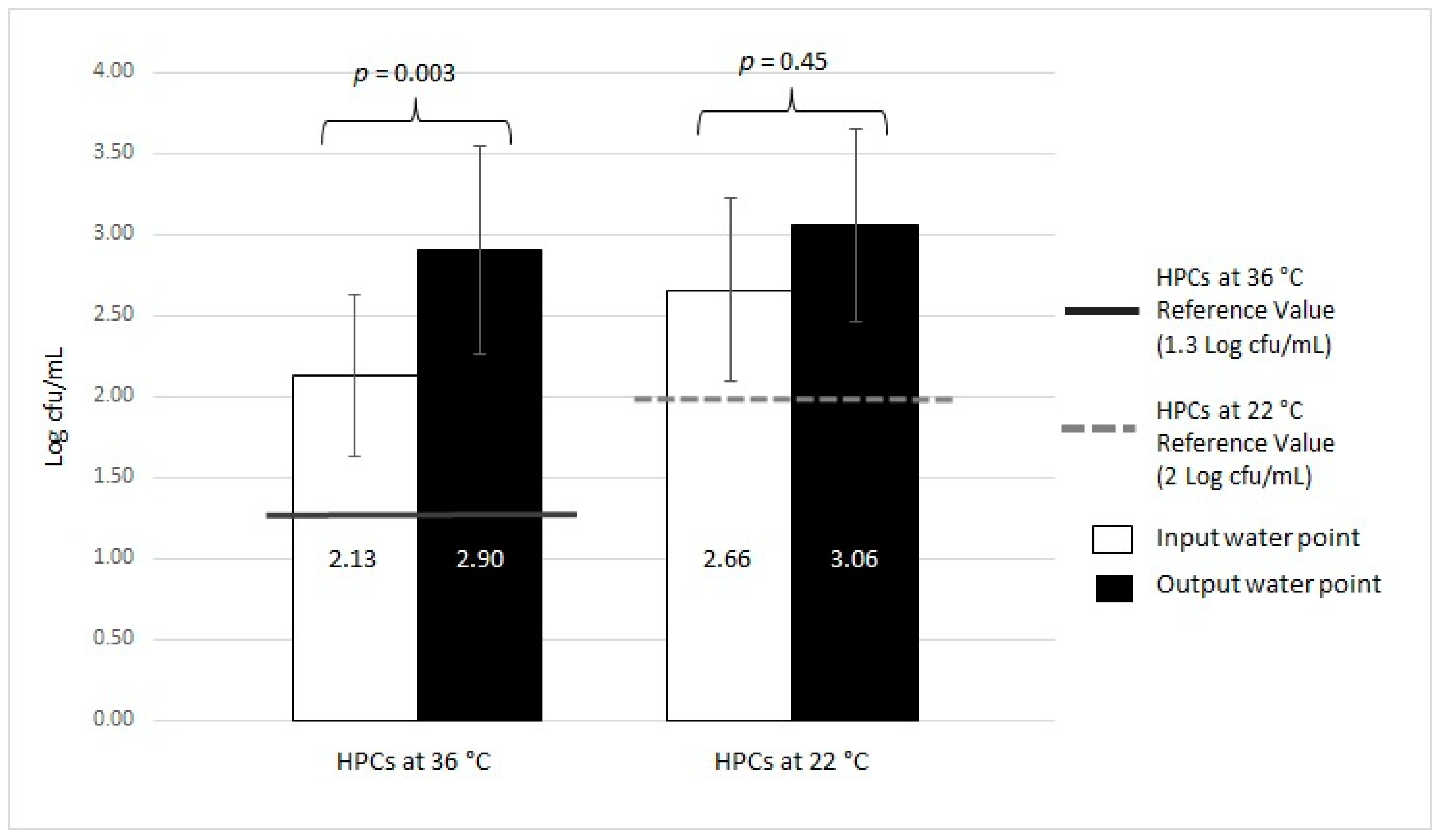 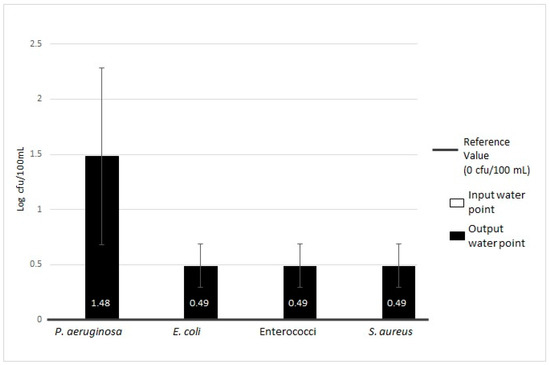 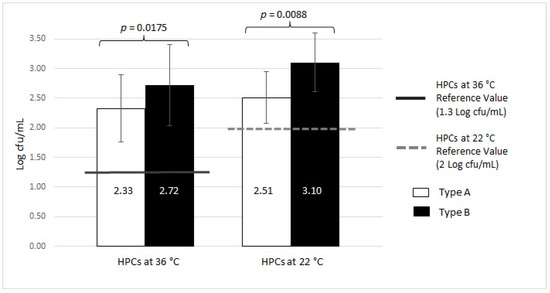 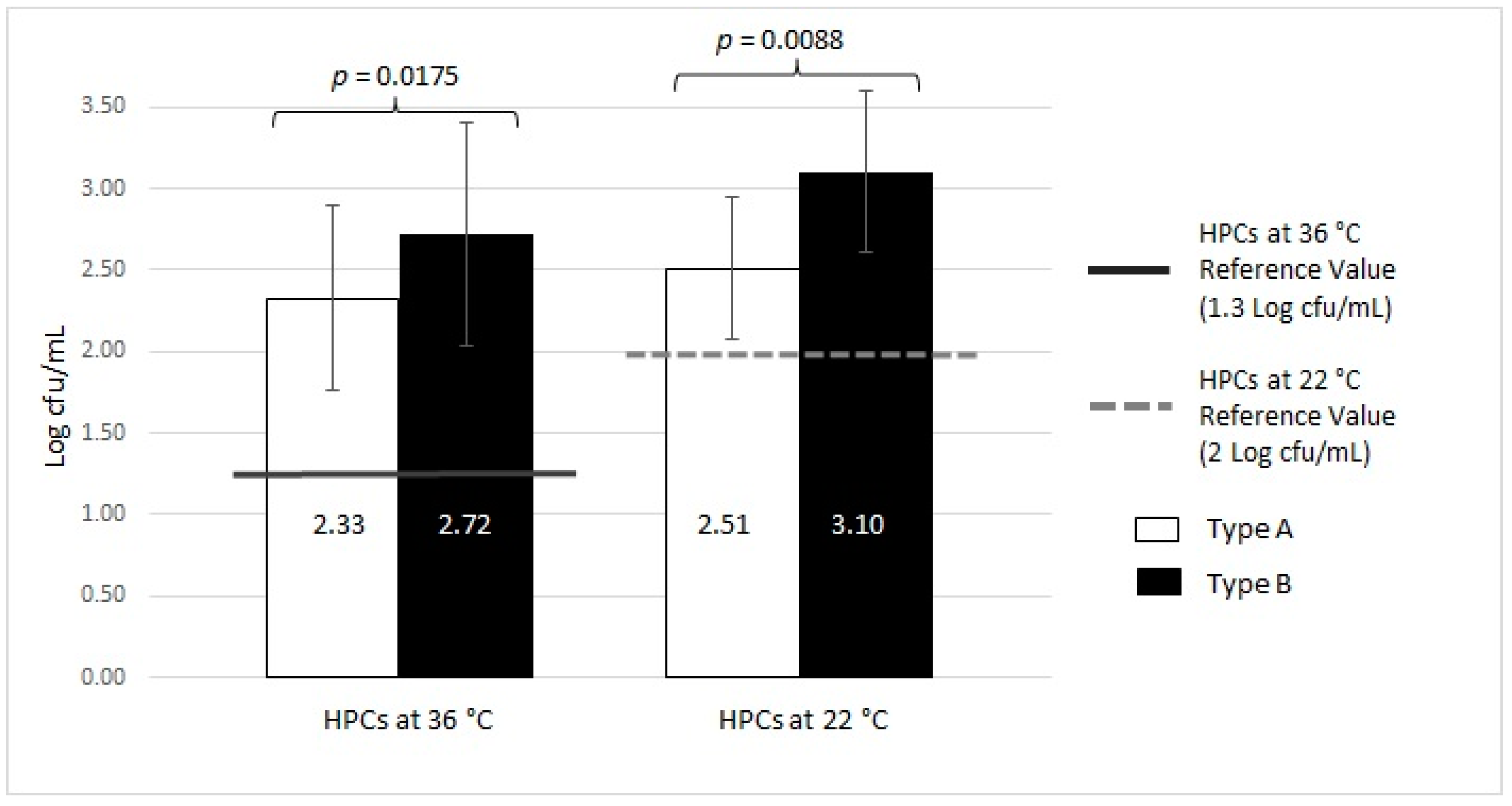 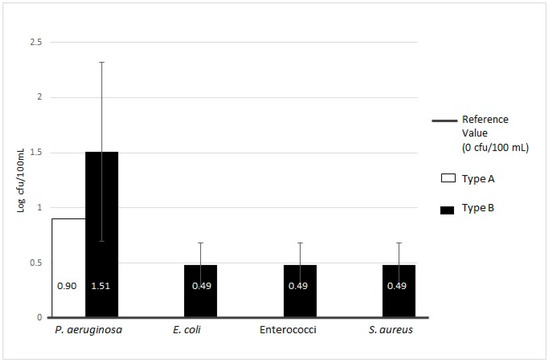 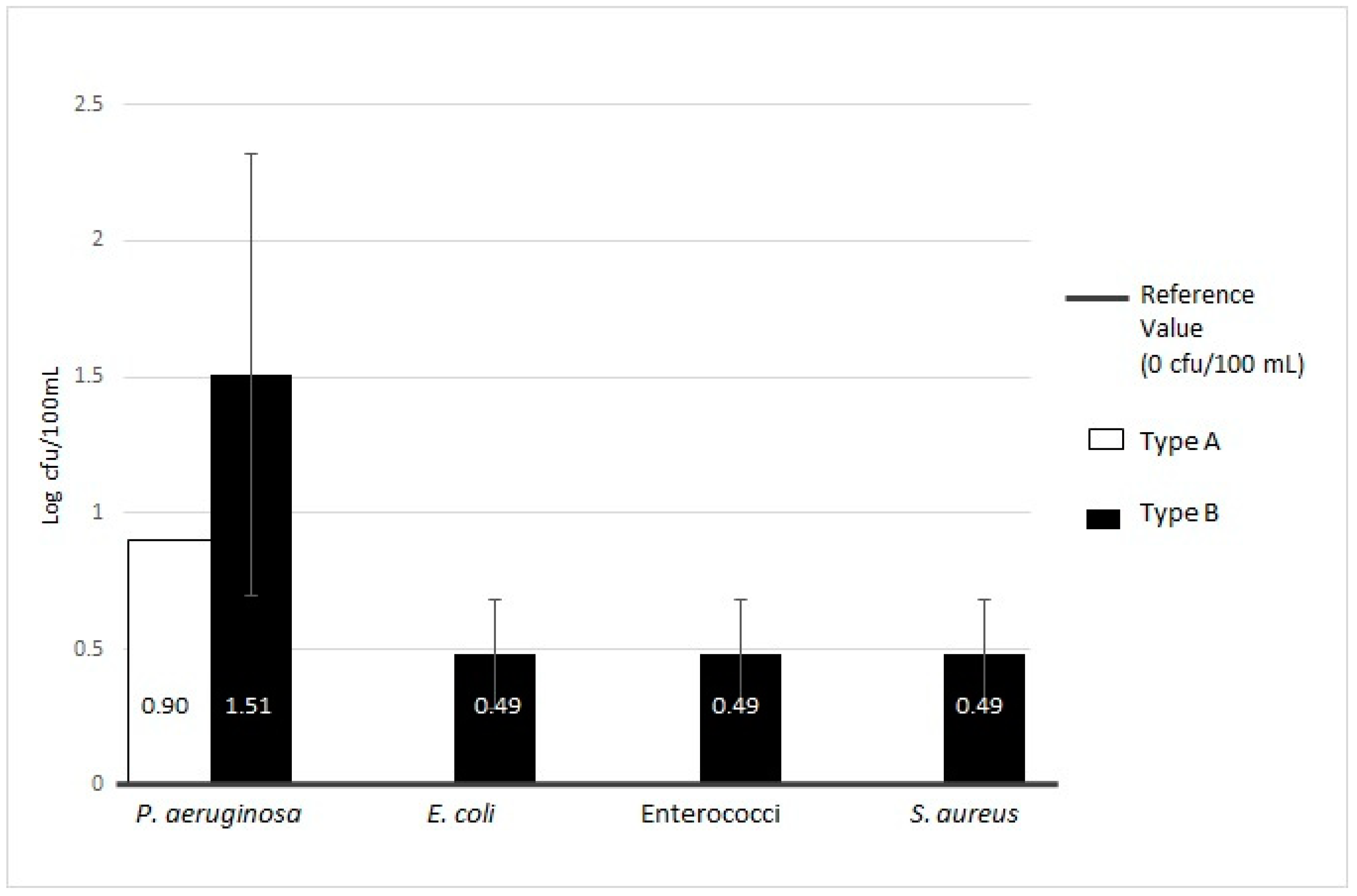 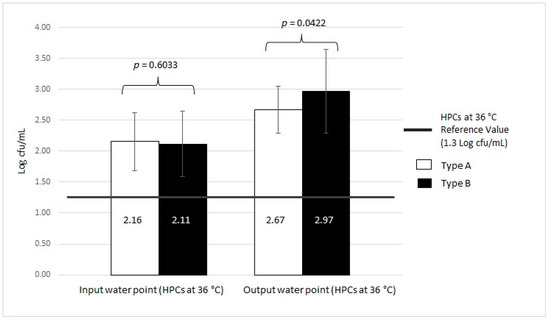 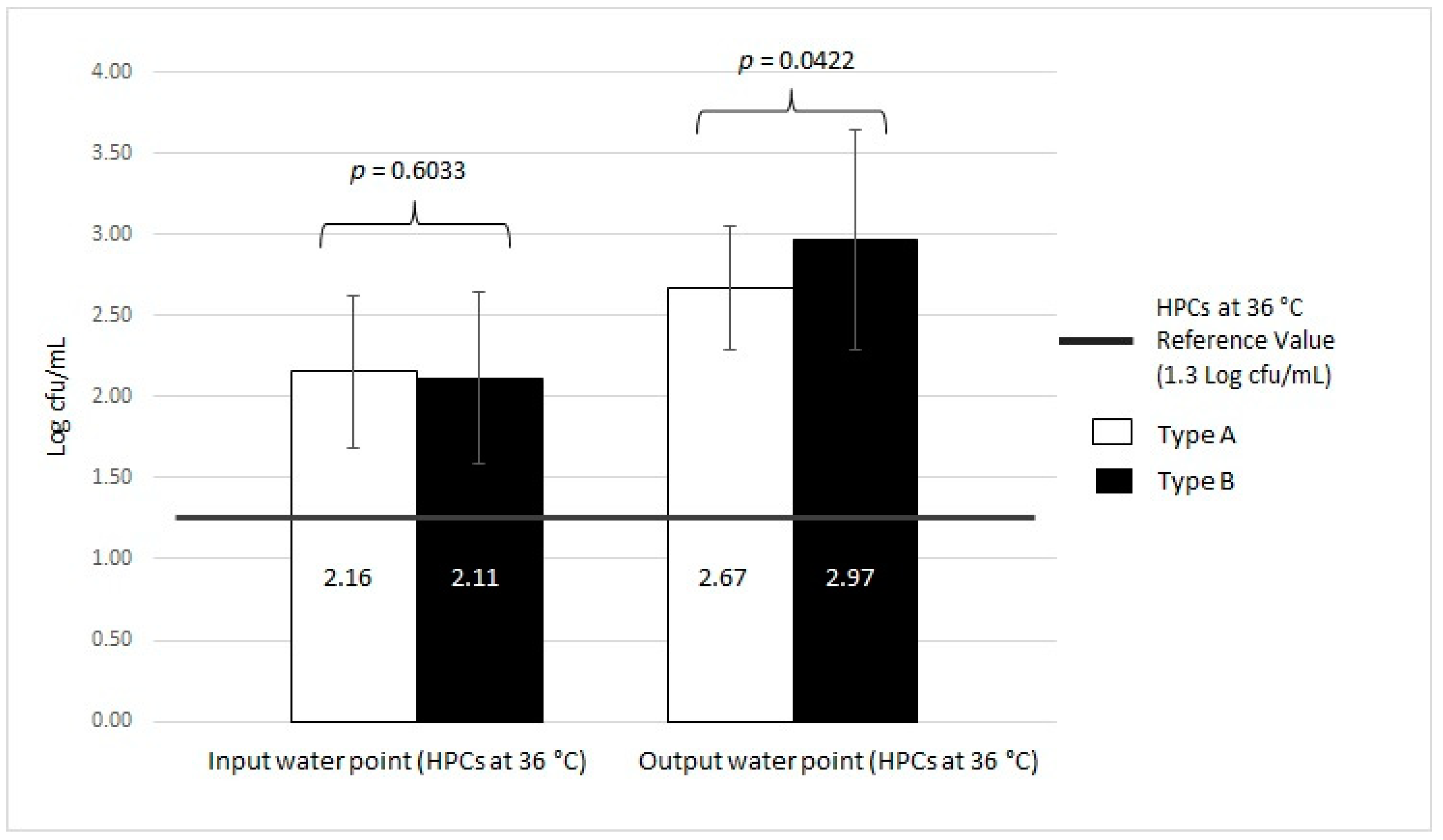 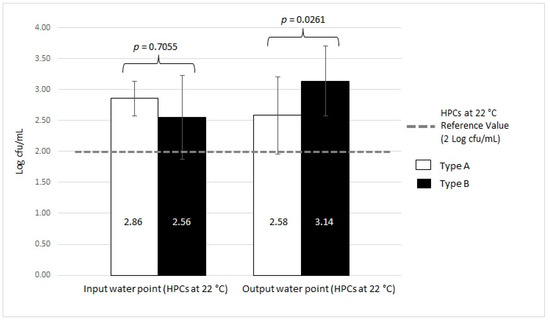 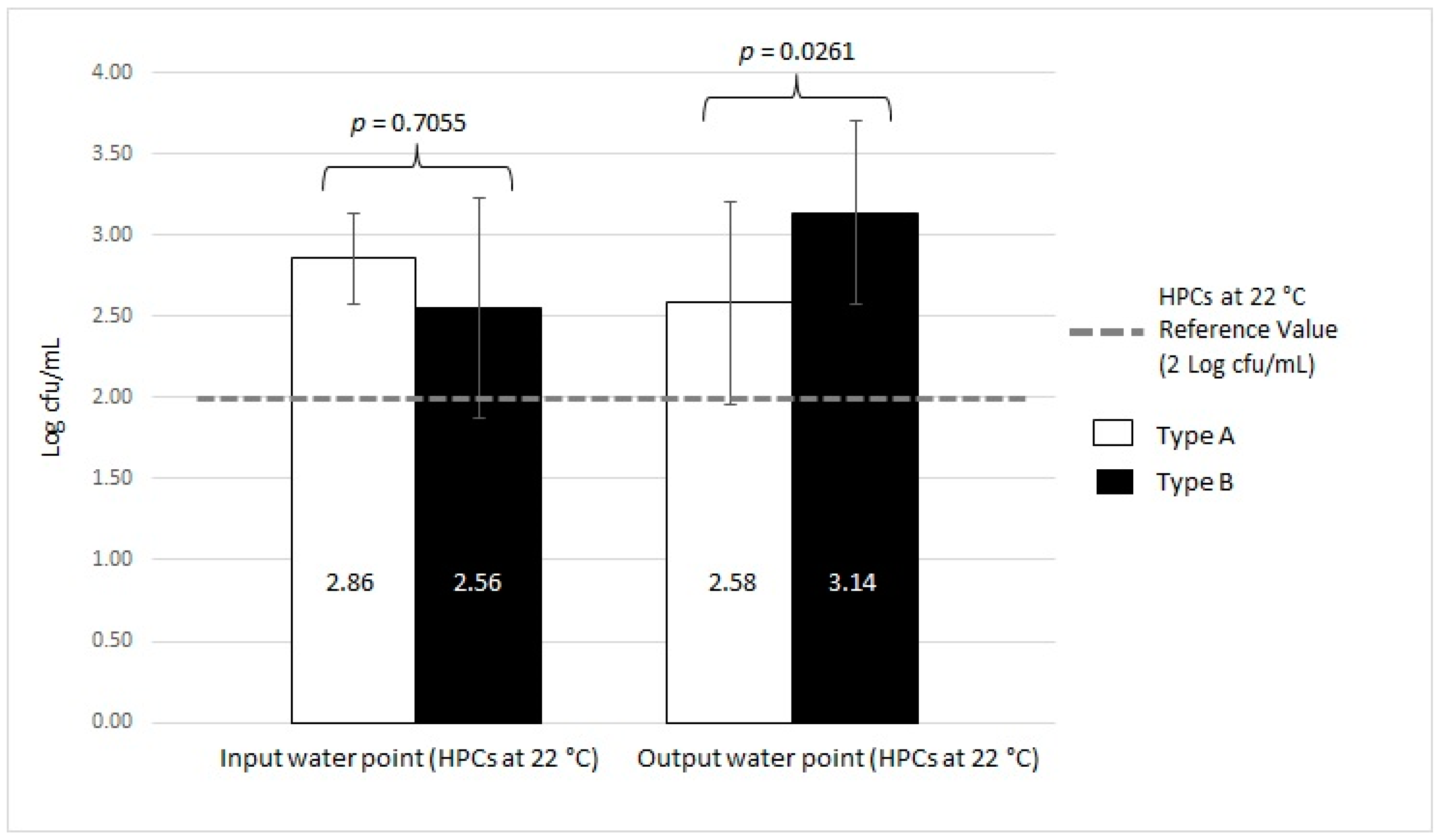