Seasonality in glucose metabolism has been observed in adult populations; however, little is known of the associations between season and glucose metabolism in children. In this study, we examined whether markers of glucose metabolism (fasting glucose, insulin and HbA1c) varied by season in a paediatric population (6–13 years of age) located in Perth (Western Australia, n = 262) with data categorised by weight. Linear regression was used to analyse the nature of the relationships between mean daily levels of terrestrial ultraviolet radiation (UVR) (prior to the day of the blood test) and measures of glucose metabolism. Fasting blood glucose was significantly lower in autumn compared to spring, for children in combined, normal and obese weight categories. Fasting insulin was significantly lower in autumn and summer compared to winter for individuals of normal weight. HbA1c was significantly higher in summer (compared with winter and spring) in overweight children, which was in the opposite direction to other published findings in adults. In children with obesity, a strong inverse relationship (r = −0.67, p = 0.002) was observed for fasting glucose, and daily terrestrial UVR levels measured in the previous 6 months. Increased safe sun exposure in winter therefore represents a plausible means of reducing fasting blood sugar in children with obesity. However, further studies, using larger paediatric cohorts are required to confirm these relationships. View Full-Text
Keywords: season; sunlight; terrestrial ultraviolet radiation; paediatric; blood glucose; insulin; HbA1c season; sunlight; terrestrial ultraviolet radiation; paediatric; blood glucose; insulin; HbA1c
►▼ Show Figures 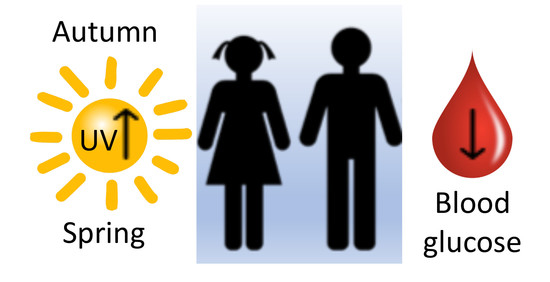