How Does Economic Inequality Affect Infanticide Rates? An Analysis of 15 Years of Death Records and Representative Economic Data
Previous Article in Journal

Linear Growth in Children and Adolescents with Type 1 Diabetes Mellitus

Association between Phthalate Metabolites and Risk of Endometriosis: A Meta-Analysis

Phthalate acid esters (PAEs) are mainly composed of dialkyl esters, or alkyl and aryl esters of orthophthalic acid (1,2-dicarboxylic acid) [1,2]. They affect human health to some extent, while some of them disrupt endocrine function and alter hormone activity in animals [3,4]. In recent years, the source of PAE uptake in humans, which includes personal care products, cosmetics, toys, home furnishings, nutritional supplements to pharmaceuticals, insecticides and medical instruments, have also been reported [5,6,7]. Studies have shown that some phthalate metabolites have been detected in nearly 80 percent of the population in the United States, indicating widespread PAEs exposure [8].
Over the past decade, a number of studies have been conducted to explore the relationship between reproductive problems in humans and PAEs [9,10]. Studies have shown that women are more likely to be exposed to PAEs through products such as perfume, cosmetics, and personal care products [11,12]. Because endometriosis is a common chronic gynaecological disorder associated with pelvic pain and infertility [13], it was important to explore the relationship between PAEs and endometriosis. Although, recent studies have shown that PAEs may have a certain influence on the development of endometriosis [14,15,16,17,18,19], there are also studies that disagree or suggest a lack of consistency in their results [20,21]. In addition, there are a wide variety of PAE metabolites, and their relationship with endometriosis is inconsistent [20,22,23]. PAEs, such as dimethyl-phthalate (DMP), di(2-ethylhexyl)-phthalate (DEHP), and dibutyl-phthalate (DBP), are commonly found in the blood add tissues of workers in industry, while phthalate metabolites, such as mono- (2-ethyl-5-hydroxyhexyl) phthalate (MEHHP), mono(2-ethylhexyl) phthalate (MEHP), monoethyl phthalate (MEP), monobenzyl phthalate (MBzP), and monobutyl phthalate (MBP), are often found in the blood and tissues of the general population. For example, Chao et al. [24] conducted a meta-analysis to analyze the relationship between the exposure to phthalate metabolites and male sperm quality. Lovekamp et al. [25] explored the effects of these phthalate metabolites on changes in the endogenous hormonal milieu.
Therefore, the purpose of the present study is to assess the potential effects of five phthalate metabolites exposure on endometriosis by a quality appraisal and a meta-analysis, based on human epidemiological studies.

We included studies according to the following criteria: (1) Papers investigated phthalates and their metabolites; (2) one outcome was endometriosis; (3) cohort, case-control or cross-sectional studies; (4) odds ratio (OR) or relative risk (RR) were offered for the associations between phthalate exposure and endometriosis; (5) published in English.
Two authors (Cai and Yang) independently examined all studies. Disagreements were resolved through discussions.

The following data were collected: Authors, country, year; number of cases; study design; types of sample; exposure assessed, OR with 95% CIs. The data are available to all readers as required.

Data in this meta-analysis were analyzed using STATA, version 12.0 (Stata Corp LP, College Station, TX, USA), OR with 95% corresponding CI were used to assess the relationship between phthalate exposure and endometriosis. To estimate the heterogeneity among studies, we used chi-squared test and Cochran Q score (reported as I2) with corresponding p-values. We used the random-effect model in our meta-analysis and conducted a subgroup analysis with the study population (laparoscopic/laparotomy population or general population), the study design (case-control, cohort or cross-sectional study), and the study region (USA or Asia).
Additionally, a sensitivity analysis was conducted by excluding each study to evaluate the influence of each individual study on our pooled estimate. All this analysis was performed by STATA version 12.0 (Stata Corp LP, College Station, TX, USA). The publication bias was not evaluated because the number of included studies was not more than ten [28].

Figure 1 shows the results of the literature search process, 372 studies were abstract from EMBASE, WOS (Web of Science) and PubMed. By screening of titles or abstracts, 242 studies uncorrelated to our study thus it had been excluded, 110 of all studies were duplicate references. After reading full-text, 7 articles [20,23,29,30,31,32,33], including 8 studies were included in our meta-analysis.

A subgroup analysis was conducted to assess the influences of study design, study population, region and sample on the estimation of overall OR.

In subgroup analyses for regions, MEHP was associated with endometriosis risk in Asia (OR = 1.020, 95% CI = 1.003–1.038, I² = 0%). However, the result was weak and additional future studies need to be included in the analysis. No specific relationships were identified between MEHP exposure and endometriosis risk in other subgroups. The detailed results are summarized in Table 4.

Subgroup analyses for MEP, MBzP, MEOHP exposure were performed in Table 5, Table 6 and Table 7. No specific relationships were identified between these three metabolites and endometriosis risk in the subgroups.

Phthalates have been shown to increase the rate of premature menopause in animals. Phthalates are estrogen and anti-androgen endocrine disruptors [34,35,36,37]. But the effects of phthalates on humans, especially reproductive development, are unproven [30,38]. However, whether the exposure to phthalates affects estrogen-related diseases, such as endometriosis, has not been addressed [14,15,16]. So our meta-analysis, which is a quantitative assessment of published data on the role of phthalates in endometriosis, was conducted to find a clear relationship between five different phthalates and endometriosis.
As far as we are aware, the current study is the first meta-analysis on the association of exposure to phthalates and endometriosis. In our meta-analysis, we investigated five types of phthalate metabolites, including MEHHP, MBzP, MEP, MEHP, and MEOHP. The findings of this meta-analysis indicated that only MEHHP was potentially associated with endometriosis. This result was consistent with a previous study that assessed the relationship between phthalates and endometriosis [16,32]. Besides, we did not observe the obvious relationships between the other four metabolites (MEHP, MEP, MBzP and MEOHP) and endometriosis. But several studies did not support this conclusion. For example, Cobellis et al. thinks phthalates may affect the development of endometriosis, and their results are the first to suggest a link between MEHP plasma levels and endometriosis [16]. Kim conducted a prospective case-control study in Korea and noted MEHHP and MEOHP played important roles in the risk of endometriosis [32]. However, several studies presented conflicting results [29,39]. Therefore, these results need to be further verified.
Subgroup analysis found that MEHHP exposure in Asia was associated with endometriosis. For the other metabolites, the results of subgroup analysis were not significant. For MEHHP group, after subgroup analysis was conducted by region, we found positive results in Asia but not in USA, suggesting that different countries have different levels of PAEs exposure, which plays a significant role, and different races also affect the outcome. Heterogeneity, that comes from regional diversity, race diversity, weight difference, sample size difference, age variation, health status, the concentration and duration of exposure of the study subjects or different detection methods, is relatively high for some meta-analysis and might have a potential effect when interpreting the synthesized results. After subgroup analysis was conducted by region, heterogeneity in the Asian group decreased, suggesting that regional factors may be related to heterogeneity, and that differences in PAEs exposure levels, in different countries, may be more important factors in this case.
Our meta-analysis has some advantages. Firstly, there has not been any meta-analysis on the relationship between phthalate metabolites and endometriosis risk before. Second, our meta-analysis identified the potential risk associated with five different phthalate metabolites and endometriosis. Third, this meta-analysis study was the ability to do a complete analysis on subgroups, such as types of studies (case-control, cohort, cross-sectional), region, subgroup of laparoscopic/laparotomy population, and general population, as well as the samples used (urine and plasma).
However, our meta-analysis also has some limitations: First, since there were only eight studies, the sample size is relatively limited. Second, there are potential confounding factors, such as age variation, weight difference, health status, BMI, and sample size differences. Although, some research data is based on the adjusted model, our results could be biased by the inherent limitations in the original studies. Third, different PAEs may coexist in some cases. And it has been found that MBzP, MEP, MEHP, and MBP may have some correlation, which indicates that they have a possible common sources of exposure [8]. Although, MEHHP was associated with endometriosis risk in our study, we could not rule out other phthalates that might influence the outcome.

Our findings suggested a potential statistical association between MEHHP exposure and endometriosis, particularly, the exposure of MEHHP might be a potential risk for women with endometriosis in Asia. No associations were identified between endometriosis with MEHP, MEP, MBzP, and MEOHP. Since the quality of the studies was moderate, it would be not appropriate to claim that these metabolites have no role in the progression of endometriosis. Our meta-analysis included only eight studies, involving fouor countries, and five common phthalate metabolites. Therefore, the available evidence is very limited, which may cause some bias in some aspects. Future studies should be conducted with larger sample size and higher number of phthalate metabolites. 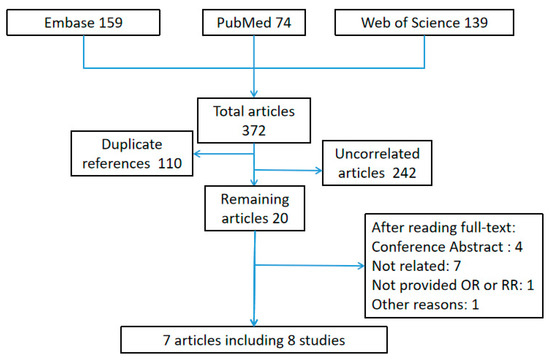 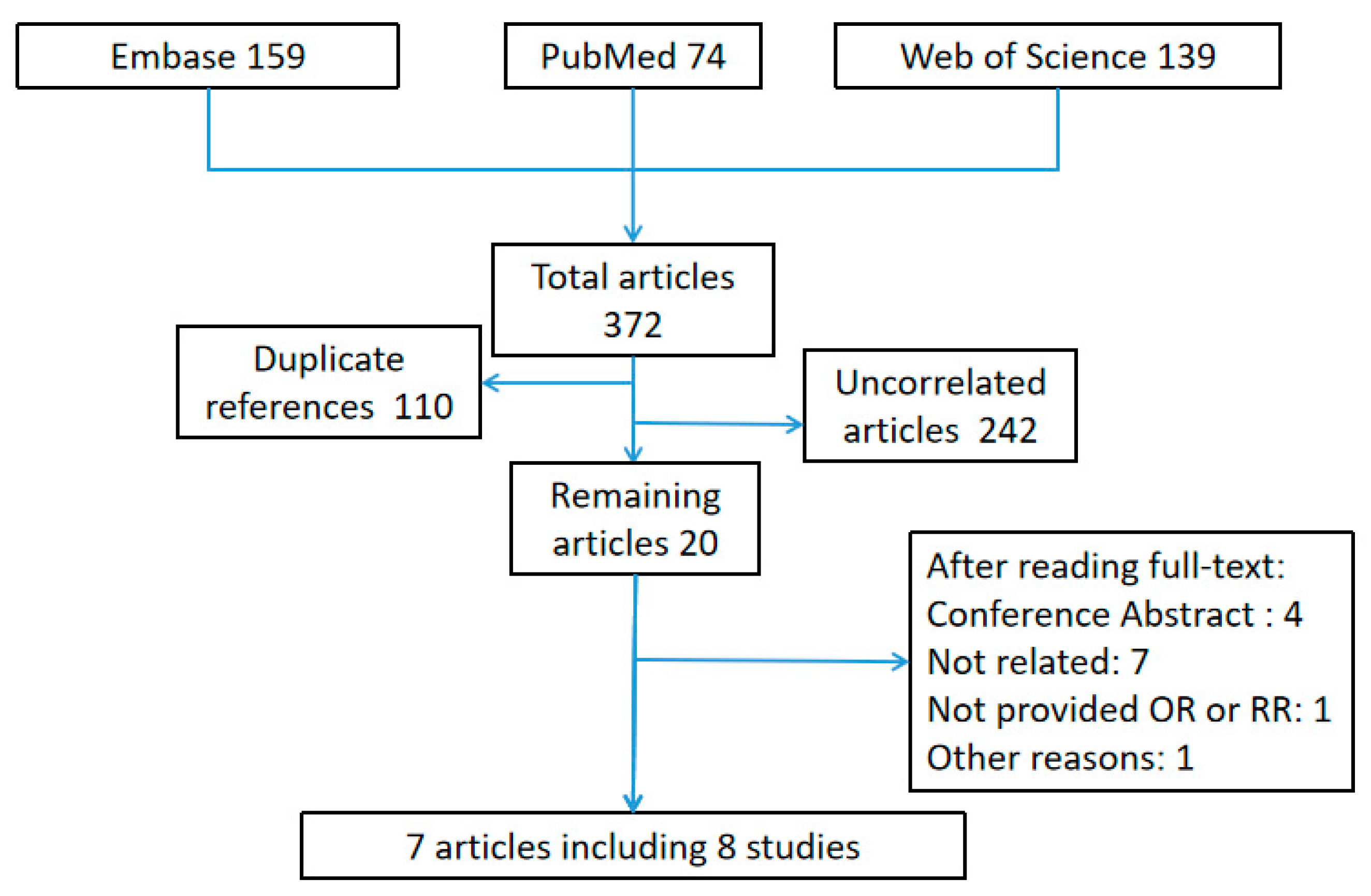 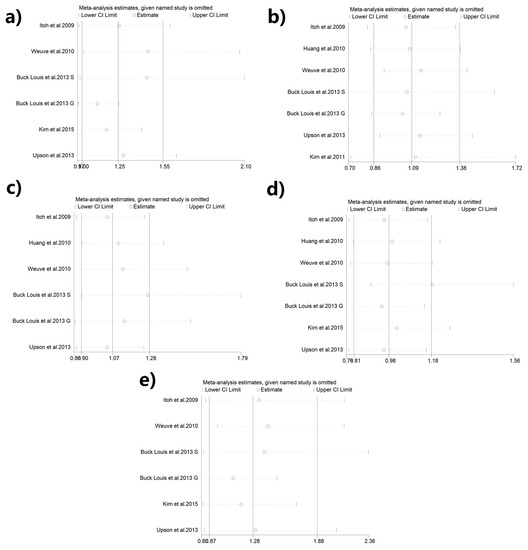 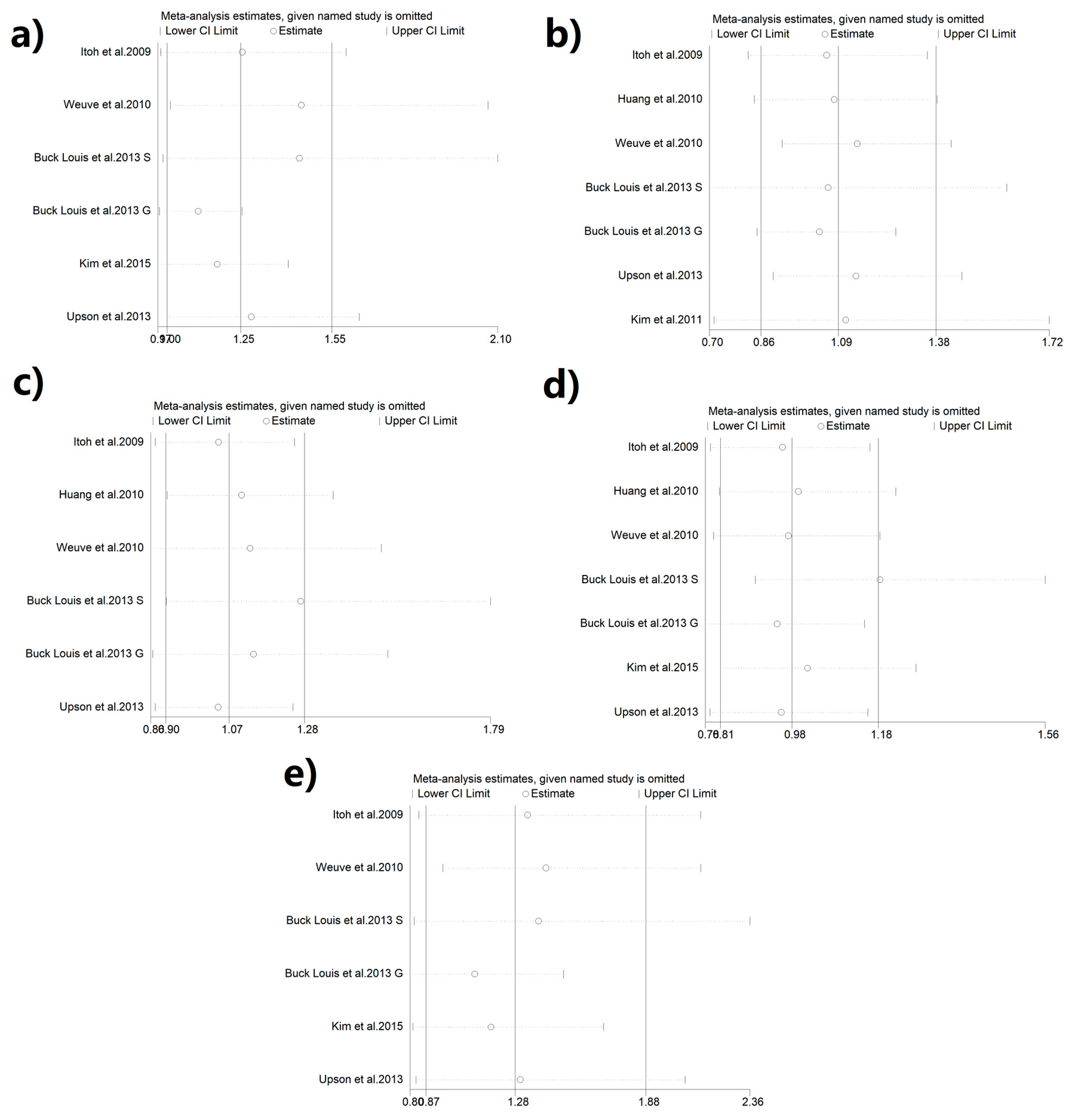