Reducing Nitrogen and Phosphorus Losses from Different Crop Types in the Water Source Area of the Danjiang River, China
Next Article in Special Issue

Post-Traumatic Growth Following Exposure to Memorial Reports of the 5.12 Wenchuan Earthquake: The Moderating Roles of Self-Esteem and Long-Term PTSD Symptoms

A potential method of health promotion using the traditional wooden brass instrument the didgeridoo was examined, especially in terms of mood, stress, and autonomic nerve stabilization. Twenty Japanese healthy subjects undertook 10 lessons of the Didgeridoo Health Promotion Method (DHPM) and a moods questionnaire, blood pressure, salivary amylase (sAmy) as a stress marker, pulse rate and autonomic balance expressed by Ln[low frequency (LF)/High frequency (HF) were examined twice before the entire lessons and once before and after each lesson. The subjects had improved total mood disturbance (TMD: overall mood disorder degree) as measured by the Japanese version of the Profile of Mood States 2nd Edition (POMS2) as a result of taking the lessons. The pulse of the subjects decreased after the lessons, which correlated with a reduction in sAmy. Additionally, it was found that sAmy decreased after the lessons with increasing age of the subject, subjects with higher TMD before the lessons, or subjects with higher sAmy values before the lessons. With autonomic balance measured by Ln[LF/HF], subjects who had parasympathetic dominance as a result of the lesson were significantly more frequent. Additionally, it has been shown that Ln[LF/HF] decreased over 10 weeks, and it is also clear that the effect is sustained. Health promotion is an important concern for societies as a whole. In this study, it became clear that the DHPM affected mood, stress, and autonomic stability. Future studies should focus on monitoring the effects of continuing the lessons for a longer period of time. Additionally, physical effects such as strength of respiratory muscles should be examined. DHPM may be employed in the work place to promote the mental health of workers as well as in regional neighborhood associations/communities. View Full-Text
Keywords: didgeridoo health promotion method; mood; POMS2; TMD (total mood disturbance); salivary amylase; autonomic nerve balance didgeridoo health promotion method; mood; POMS2; TMD (total mood disturbance); salivary amylase; autonomic nerve balance
►▼ Show Figures 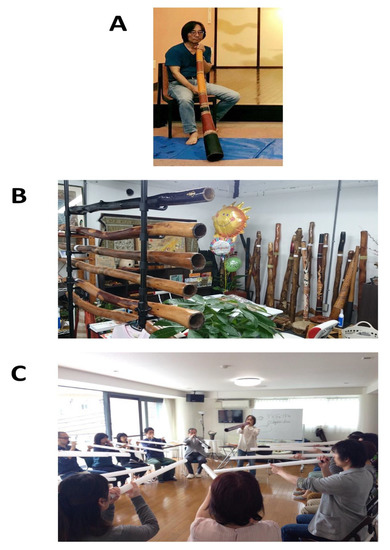